what a prick for not telling his fb though, still trolling after 9 years

what a prick for not telling his fb though, still trolling after 9 years

des.kmal and I are making a return to this god forsaken game. Prepare your anus.

2 bads returning for some bad

this mfer is what you call eternally butthurt.

des.kmal and I are making a return to this god forsaken game. Prepare your anus.

2 bads returning for some bad

ill get the 720 or whatever the next ones called obvs

we are bad except for myke but he also gets dead all the time so it balances. and he steals all the good guns and stuff but otherwise hes not a bad person i guess

Game disconnected: you were kicked by an admin. Stated reason: TehMyke, Nice Accuracy and ONE HELL of a KDR/Kdr #2 Accuracy

Game disconnected: you were kicked by an admin. Stated reason: Your stats are suspicious, you are temporarily banned until your stats can be reviewed. - The ban duration is 60 minutes.

How far into the round were you when you got that kick?

I didn't even get to load the map lolz, these faggot plugins auto kick you on JOIN.. admins y u so bad.

Game disconnected: you were kicked by an admin. Stated reason: Your stats are suspicious, you are temporarily banned until your stats can be reviewed. - The ban duration is 60 minutes.

TehMyke must not of posted yet

Increased the amount of times it'll take to try and join a server by 100% with even more Black Screens, Crashes, Kicks and Errors.

I wonder how well that would work for some of the pilot's weapon unlocks, especially guided and TV missiles.

only slight problem is that the heli needs to start up again every time you go back to driver seat so you need to be at least 50m off the ground.

Just had a really weird game. Me and Cammy were trying to tear shit up in the chopper, but there was a guy on the opposite team in the chopper with 5.5k kills. He could outrange us with heat seekers, and he had what seemed to be an instant flare reload time. I had to be right on top of him to get lock on, but he could lock on from the other side of the map.

pro tip #1; you can have flairs on both pilot and gunner seat, you can switch to gunner seat flair and go back to pilot seat thus giving you 2x teh flair spammage, its win.

he was on his own with ecm, not flares, oops

pro tip #2; the perks on the 'kill cam' screen are bugged 90% the time (hence why you see shit like tanks with AA missiles and jets with thermal showing on the kill cam)

ps, you're both shit at helis... just sayin' 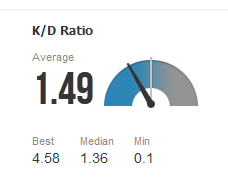 Who's the baddie with the 0.1 kd on the bf3s platoon lulz.

How many of you guys played BF2 from release?  I don't know if any of you guys remember me; I started playing way back when the game first came out and left after the patches screwed the game over a few years later.  Does anyone remember the days of blackhawk squads getting triple points of anyone else on a server, or the insane bunny hopping and noob toobing?   I heard a few more patches have come out and fixed some things and added some maps (too little too late sadly).

Anyways, we got some BF2 vets in the house?  And how do you guys feel about BF3?  I'm getting a BF2:SF feel from it more than vanilla.  That's not a bad thing I suppose, but I wish they would bring back a few more of the old BF2 maps like Dragon Valley.  That was my favorite.

Anyhoo, if anyone is here I used to play with, feel free to contact me and we can try to get some games going on BF3

I need to try this.

Think you might need to find a FF off server.

3. wait for their rage as they realize they cant shoot teh mortar anymore due to it bounces off your vehicle and blows up on the ground

well obviously you're supposed to be playing "Normal" preset and NOT hardcore or you're bad, etc, etc.


edit: however if you are a hardcore fag I suppose you could park the vehicle on top of them and get out and they'll blow up the vehicle with the mortar and maybe kill themselves.

How to rage mortar fags on your team:

you're all bad, kbi.

This game is definitely Bad Company 3.

I called it BC3 months ago but everyone QQ'd and now people are finally realizing it.. yayz

If the PC is ready to rock, why are we waiting?

just another case of consoles holding back pc brah!1!11

tehmyke is a massive tool

Fixed, might as well call the game by its real name now.. rite dice?

this game makes me hard.

because its BC3 being label as BF3 to try to build false hype for it in a terrible attempt to try and compete with cod.. lulz.

then ban anyone that says they're going to buy BF3 for a console.

Hey guys I'd just like to remind you that BattleField 3 is NOT a sequel to Bad Company 2 but BattleField 2 : Modern Combat !

He's a complete newfag and his channel will provide mutliple facepalms.

OH CONSOLEFAGS YOU SO NEWFAG

I'm hoping they're going to remove the BC2 style spotting from Battlefield 3. It's so stupid. When asked about it they said they weren't sure.

If they're going to have any sort of spotting it should be like BF2 at the very most. An icon on the minimap.

So you want what? Dolphin diving?