It depends. I might put my money on some huge, grizzled chonk-cat over a half-grown fennec. 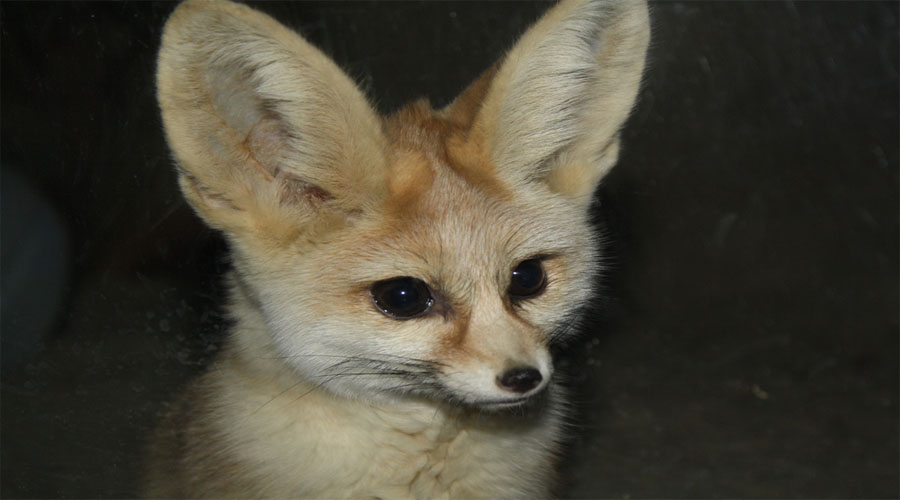 I would date this fennec.

There are currently no less than 5 games that will only run on my Win 7 OS that will not run on the latest version of Win 10. Windows 10 is the worst piece of software in human history.

Windows 10 is great. It keeps randomly breaking in strange ways, so I get to make more money fixing people's problems. :^)

Sure, here you go.

I didn't even know there still were T.V. repairmen.

Everything breaks, and people don't like to toss away their three-year-old sets. It somehow comes off as a tad wasteful.

No, something more fun than that. TV repair guy and part-time professional vlogger. Always did like the attention.

Updated (with one score).

Sandy Bridge is cheating tho.

I still want the Junk Drawer back.

I need to connect a laptop (with Sky Sports, woo) to a TV. However;

What kind of cable should I be using? I've been browsing Amazon, but a lot of the reviews say the cables don't work.

There isn't really any easy way to do that. SCART and VGA use different systems for syncronising. You're going to need an active adapter to do it and they can be both fairly expensive and poor.

where the fuck have you been

I'm really not going to bother updating this chart any more, unless there's some serious want behind it (knock on wood). All members getting new hardware that they want on the chart is going to create a bureaucratic nightmare out of managing it.

I just tried the beta for the first time. I expected Battlefield 2 levels of greatness, but instead I received another generic, two-colour (At least it's blue and green this time, as opposed to the normal brown and grey), modern shooter. Oh, joy.

BTW, is that a cheiftec case Freezer? It r huge.

No, it's a last millennia OEM server case.

Hit me back when you've got SMB2 and a file system that actually works on mechanical drives.

Also, I now see that I forgot to plug the CD drive in. Oh well.

If it weighs less, more power to you and t. It's just my preference not to have giant bulky things coming out of my computers' ports. Stubby DIV<-/->VGA adapters were bad enough.

I have one of those stuck back there, too!

It's not like it matters, I never touch the rear side of the Mac unless it's broken, anyhow.

so you can use 2 mouses at the same time?

I've always hated the extra weight of adapters like that. Prefer ones with some wire to space the bulk away from the port.

I can't say that I care; it works.

That is until a collision with a knee or shoulder, depending on case placement.  Or if at back, coming loose what with all the other wires around.

Considering that it's only about twice as long as a normal USB plug, I don't think the difference is worth noting. In fact, I find it to be a lot more practical than my previous one, which was indeed a "wire-box-wire" thing, as there's already too much spaghetti between the computer and the wall.

In the end, it's merely a question of preference and how you use it. In my case, I find this design to be preferable.

so you can use 2 mouses at the same time?

I've always hated the extra weight of adapters like that. Prefer ones with some wire to space the bulk away from the port.

I can't say that I care; it works.

I got myself a USB-to-PS/2 adapter and a single chip today.

This USB-to-PS/2 adapter (Device ID 0x0020, manufacturer ID 0x0e8f) is lovely. It supports KB/M, KB/KB or M/M, hot-plugging of them, and it's even compatible with my PPC Mac, something which wasn't quite the case with my old one, which required me to plug it into a computer running Windows in order to initialise, and then, without breaking the power, moving it to the Mac. That was rather cumbersome. And the <> key didn't work.

That's actually pretty cool, I want one in my kitchen!

My thoughts exacty.  But also one in the family room, wall mounted.

That's actually very doable, and the manufacturer (FEC) have models for applications just like that. However, the downside is the price; you can get an Imac for cheaper than most of'em.

do uou have to have the finnish XP on it?

That's Swedish, actually. I just tried to start from my USB CD-ROM drive, and this is the CD that was inside, heh. 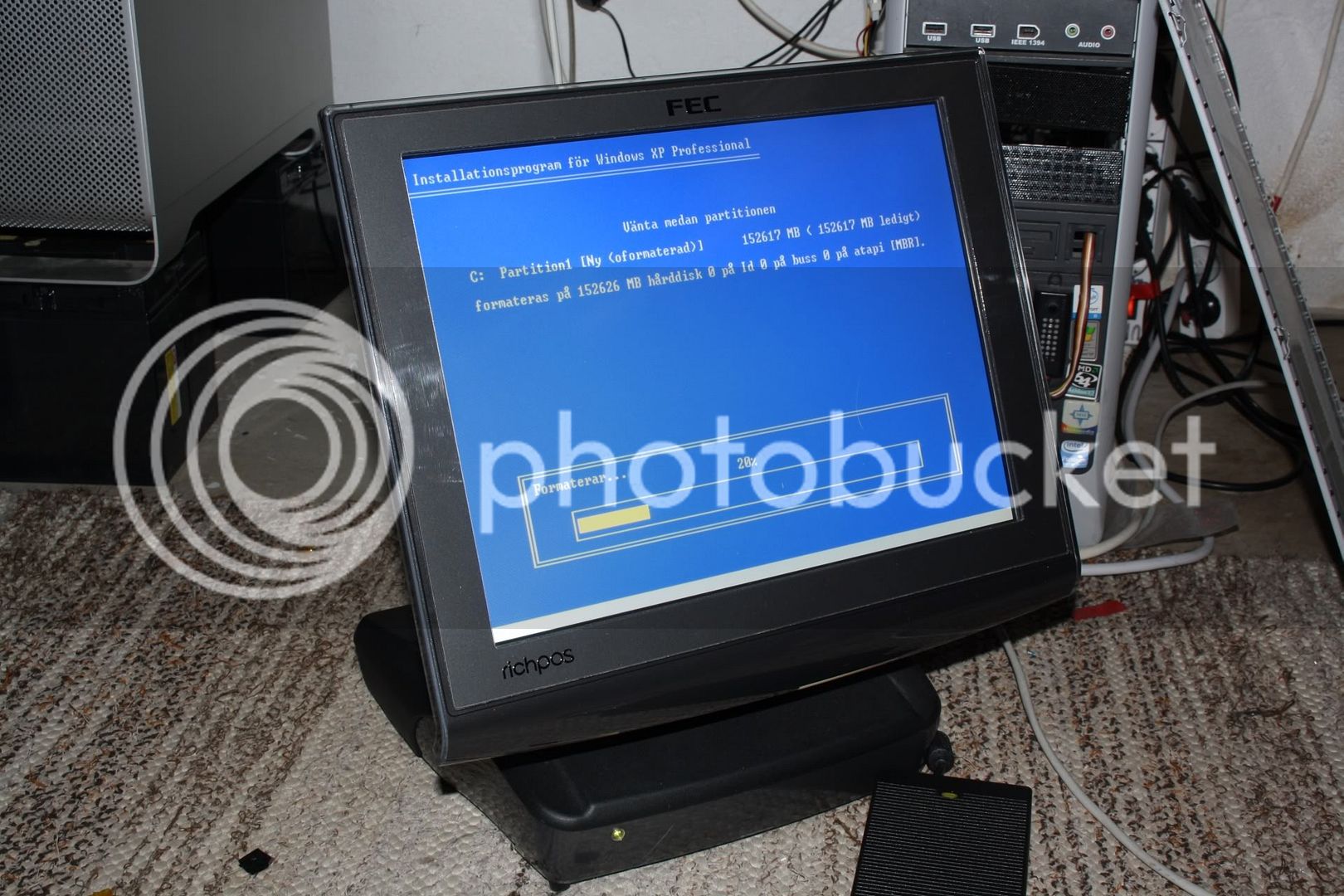 There's a whole computer with 1GHz of raw 5,5W, 90nm Celeron ULV power in there, as well as 160GB of storage space and 1GB of RAM! It's also touch enabled via a Fujitsu resistive touch controller with its net above the 15" XGA display, which is encased in a 5mm thick aluminium case.

It's nothing too interesting, I think.

As you can see, we solved the problem. 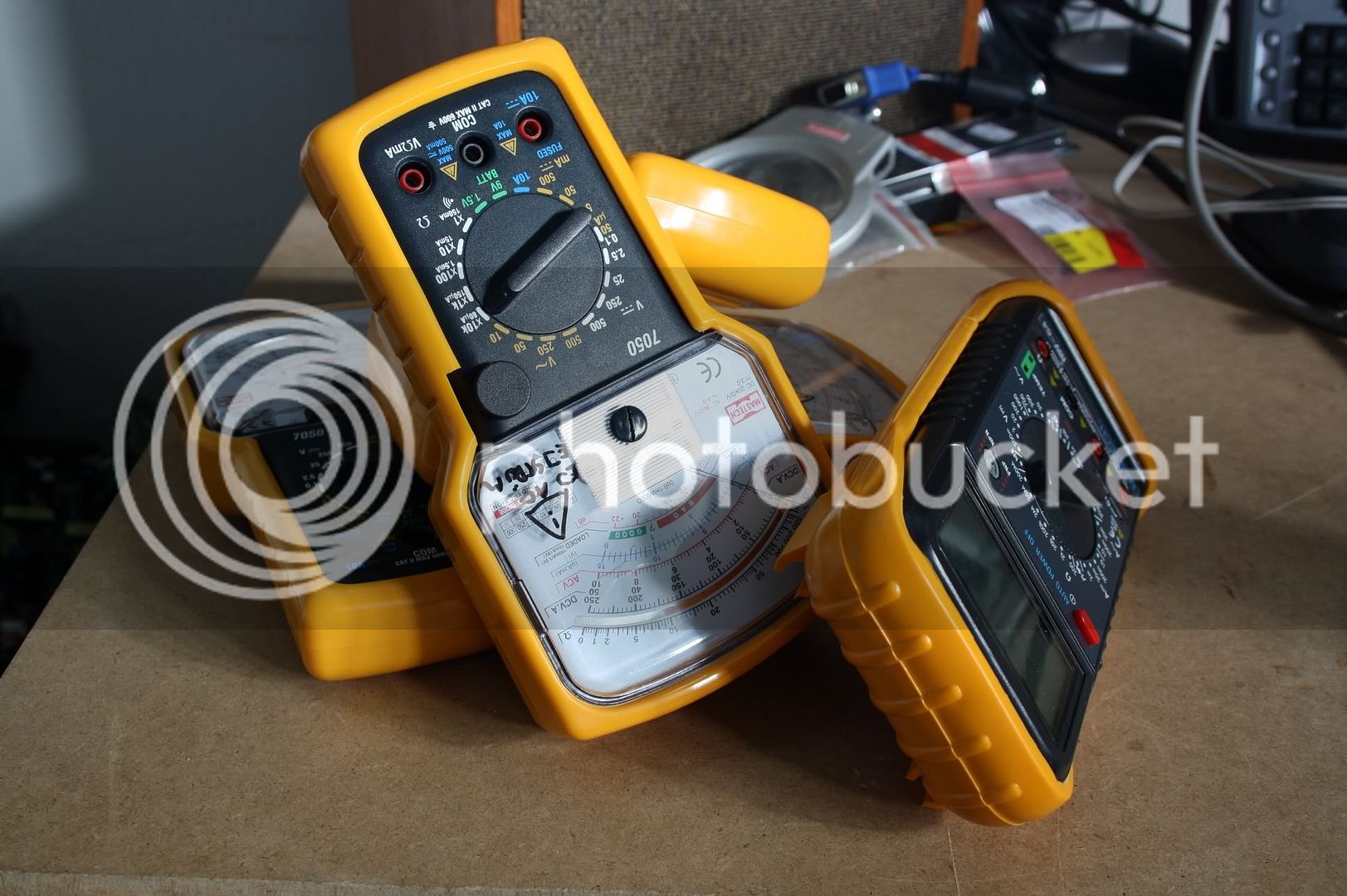 I hate dicking around with those rubber slips.

Why would you ever remove them, other than to replace the battery?

A truck has been dispatched in order to collect your obsolete, high-resolution panel.

I wouldn't do it, max. The larger L2 cache will probably bring the power usage much higher when idle, thus destroying your battery life, even if you aren't doing too much.

26 inches of pure-breed Chinese TV! Complete with machine-translated menus and everything. It's hilariously bad in Swedish.

Quick sale for you then??

Probably. I'm gonna play around with it for a while, though. This thing is way more usable than the 1.8GHz, single-CPU Imac I had a while back.

It was supposed to be broken. Aside from about a kilogram of dust in the cooler, I haven't found anything wrong with it.

EDIT: Holy mother of god. Why are people paying over $500 for these on Ebay?

A rather bulky designer space heater.

They are both identical.

EDIT: Upon further inspection, they have, while being quite well-designed otherwise, rather cheap capacitors (TEAPO), and a sleeve bearing Yate Loon fan. While I'm not complaining, if anybody else is going to purchase one of these units, I wouldn't recommend it unless you're willing to modify them; in this configuration, they will not live very long.

I set my hands on these two, rather generic looking units today:

I will have to agree with Jay and Eleven Bravo. If you're going to be using it for school work, then you need a reliable business machine. There are none with respectable graphics chips in that price range. Consider HP Probooks with the "b" suffix or Lenovo Thinkpads of the T series.

Well, I find that the first result on Google is quite descriptive. Your hard drive is broken.

the laptop doesn't start. Read OP and then comment.

I was a bit quick on the "Submit" button. Run a chkdsk /F from the recovery console. A Windows XP CD works fine for that.

Well, I find that the first result on Google is quite descriptive. Your hard drive is broken. Run a scandisk from the recovery console and try again.

The only good thing to ever have come out of the Eurovision Song Contest was Lordi. And they weren't even particularly good.

except you get a hard-on over unicorns

Conforming to normality is overrated.

It means that I try not to judge things prematurely, and neither should anyone.

One must keep an open mind.

Do I have any fetishes or sexual fantasies?

Aside from the whole furry thing, well, I wouldn't know the names of half of'em.

I'm thinking about the more technical aspects of it; they sacrifice things like cooling (100-degree-Celsius i7 Macbook Pros), performance (Running Macbooks without battery inserted), serviceability (New Imacs' hard drive connector, Macbook Pro batteries) and even usability (17" laptops without numpad, arguably the chiclet keyboards) in order for their products to appear more streamlined. That is bad product design in my book, and something that I prefer steering clear of.

Please, don't refute any of the aforementioned points, I'm not going to get into an argument about it. The only conclusion we would be able to reach through that is that we have different opinions regarding what product design choices are to be prioritised.

hahaha well then you're a total fucking MORON. you sarcastically comment that i'd only buy an apple "for the looks"... so you'd pay a massive price for marked-up components (which, as zimmer has pointed out, you can get more cheaply in a windows laptop or desktop build)... and then you'd strip out OSX and all apple products? so you're basically ONLY BUYING IT FOR THE LOOKS.

I wasn't being sarcastic. They are nice to look at, and that can be an important factor when choosing a computer.

i just quoted the exact same post 4 posts ago. you read back? haha. od'ing is a no ty scenario.

and how am i flipping my shit? freezer is hilarious. he's anti-mac for the sake of being anti-mac and directly contradicts himself and looks like a twat. "hurf durf people only buy macs for the looks because they're stupid... though i'd spend £2000 on a macbook so i could run it like an expensive version of windows with nothing apple about it except for the exterior appearance".

I'm not "anti-Mac", I just don't consider myself to be a fan of the general form-over-function agenda that Apple have.

By the way, if I were to purchase an Apple computer, it would be an Imac, they're so practical. I couldn't give a toss about the other products in the range, they usually won't do anything I need that the competitors won't.

yeah because driver bluescreens and windows crashes arising from updates and subsequent conflicts have a lot to do with hardware assembly.

you can't argue about windows being a lot more unstable and a lot more temperamental than osx. for whatever reason.

You mustn't be very good at maintaining your operating system.

as i said the mac is a consumer option that just works from the get-go. why would you want any more hassle than that if money was no object?

That said, if I were to ever buy an Apple-branded computer, I would run Windows exclusively on it.