I don't think anyone is going to bother sailing into the Baltic sea.

What it does is potentially prevent Russia sailing into or out of the Baltic sea, which is a problem as they've found in the Black Sea.
Good luck sinking Gotland or Denmark.
Русский военный корабль, иди на хуй! 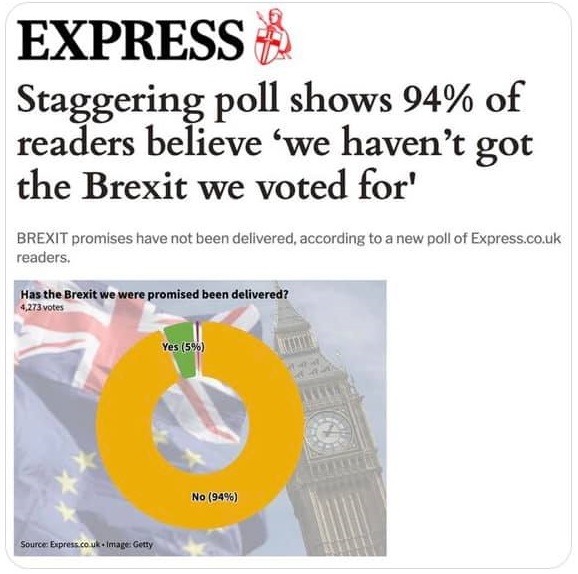 'express readers' are a pretty fair straw-poll for brexiteers in general.

didn't i literally tell you that insisting on 'knowing' brexiteers thoughts and wishes is a highly fraught affair?

most of them are disilusioned that the great british empire hasn't been restored and their lives made awash with milk and honey. and an even smaller fringe nut minority, which you maybe will find on the express, thinks brexit hasn't quite been hard enough. that's the group who wanted to expel everyone with brown skin. because, you know, they came from the EU.

you’ve got to love the fact that the elite ruling class who whip up all the xenophobia in the proles speak 2-3 languages themselves, own properties in the south of france, have turkish and french and german ancestry on their immediate family tree, etc.

all of the most vociferous campaigners and snake-oil salesmen for the business of brexit have quietly made business arrangements to shift their offices and tax registrations to ireland, etc. or in this case have literally tried to secure citizenship in EU countries.

Johnson has delivered all of the negatives and none of the positives - not that there were many of those.

The billions funneled to chums for PPE contracts should be enough to do for the tories, probably won't be as the population is so stupid and lazy, not to mention fat and sick.
Русский военный корабль, иди на хуй!

there were no potential positives. your nativist xenophobic vision of the world has no constructive solutions for the future.

There didn't have to be any legitimate positives or for anything about it to make sense. People bought into the vibe.

- Getting rid of coons

Here the country has gone Labor, seems like a nice idea but they have no actual ideas and they're guaranteed to fuck up the implementation.

As usual I took the how to vote card from the prettiest girl and this year it happened to be Green, although I did put purple-hair girl first because she seems nice.
Русский военный корабль, иди на хуй!

I'm sorry, a 'how to vote' card? Even in person I don't recall seeing those being handed out. Is it just me?

The preferential voting system is complex, all sorts of back room deals are done, and instead of thinking for yourself its easier to just follow the card of your preferred candidate to maximise their chances and not accidentally vote in some jerk..

Its still better than a 1.5 party state.

I understand preferential voting. It makes more sense to see it like that, just been up all night. I doubt a lot of people put too much effort into figuring out an optimal listing themselves. Probably lots that just vote based on the best looking photographs or least foreign sounding names.

I understand preferential voting. It makes more sense to see it like that, just been up all night. I doubt a lot of people put too much effort into figuring out an optimal listing themselves. Probably lots that just vote based on the best looking photographs or least foreign sounding names.

most people vote on party lines in aus, lots of independent (all women) wiped out our conservative party in stronghold seats.

form dept PM and amber heard nemisis barnaby is real mad, apparently its all the voters who are wrong for voting them out, cos they happen to be 3 gays, an aboriginal and an asian.

Boris Johnson has dismissed the idea of an alcohol ban in No 10 in the wake of the damning findings of the Sue Gray inquiry.

After the prime minister was asked about the suggestion during a meeting of the 1922 Committee of Tory MPs, a party source told PA: “He made the point he’s not a big drinker himself but had alcohol been banned in 1940 we might not have won the Second World War.

“The fact about No 10 is there is an alcohol policy that now sets guidelines to its use.”

He added: “there’s a recognition that at the end of a really long, hard day .. the remedy for decompressing ... is to have a glass of wine or a beer.

“So, there’s recognition that part of decompressing at the end of a long day involves having a drink, but not checking out at 4am absolutely legless, having been rude to a member of staff, having thrown up over a sofa.”

The source added the prime minister was due to have “an audience with the Queen” this evening virtually following the publication of the Sue Gray partygate investigation.

red wine on the walls and people getting legless drunk during the heaviest phase of lockdowns.

and these people deny they have a problem with alcohol.

I have a dream that one day our leaders set aside their alcohol and instead smoke a bit of weed.

The problem isn't alcohol its that they're turds.

The problem isn't alcohol its that they're turds.

Oligarch-Warlord Tony Blair wasn't a big drinker and look at all the people he killed.

these people were drinking every week, sometimes multiple times, not 'leaving the office' until 3-4am on a regular basis.

this office being the official residence of the leader of one of the world's oldest democracies, mind you, not a corporate unit near slough with a well-stocked pantry.

the prime minister would walk through the 'office' (which are of course also his private quarters), weaving past roomfuls of drunken revellers on a weekly basis.  he'd stop to drink a toast to someone, neck a glass, and carry on his way (likely to drink in his private inner sanctum, as well as god knows what else, probably). no moral sense that having your staff pissed up on a weekly basis in their place of work is perhaps unprofessional or unwise. that workplace culture would be considered rotten even in non-lockdown circumstances.

the drinking culture was systemic and problematic. fights broke out in downing street twice between drunken revellers. tell me alcohol, a drug which reduces inhibitions and makes people quick-tempered, isn't part of the problem when you have physical and verbal altercations in the very seat of government? not a good look.

the whole drinking culture of british politics, including members' bars in the houses of parliament, pissed-up old boys with red faces braying and hooraying in the chamber of the commons on an afternoon session, etc, is a bad victorian hangover. a modern democracy should not be ran like a gentleman's club between a bunch of entitled public school nitwits. and booze, as in frat cultures and 'greek life' societies in upper-middle class american college->corporate->government life, is a huge influencing factor and social rite. it's no accident that america has a heavy-drinking date-rapist on the supreme court. people from elite/ruling class backgrounds are socialized to think that getting smashed on the regular, even at work and in their professional capacity, is a-okay.

Thats the real problem, not what they do in their off time.

Sunak doesn't even drink, look at his behaviour.

lol, it's amazing. i tell you that studying humanities isn't what corrupts their behaviour, it's the fact that they are born and socialised as ruling-class entitled nitwits -- and you maintain to the end of time that one's undergraduate reading is the cause of their entire adult personality and conduct.

then when i say 'look at their clearly problematic and unprofessional abuse of alcohol in the workplace, and the resulting poor behaviour which results from it', you say ... no, no, it's because they are born and socialised as ruling-class entitled nitwits, you see.

i wonder what was a more proximate cause of the culture of rule-breaking and debauchery at no. 10:

- regular and socially encouraged consumption of a drug on the premises which is directly tied to lowered inhibitions, poorer self-control and decision-making, and increased recklessness; or
- reading gibbon's 'the history of the decline and fall of the roman empire' 22 years prior at an oxford college.


Sunak doesn't even drink, look at his behaviour.

sunak was only fined and implicated once. he lives next door, not in the party residence. and that residence was overwhelmingly categorized by a revelling atmosphere. they were smuggling in alcohol in briefcases and safes for months on end, ffs. literally conniving and conspiring to have boozy parties. messages sent over the whatsapp group: 'don't walk out the front door with any wine bottles visible'. alcohol is a MAJOR component of this entire furore. i doubt they would have hung around until 4am every friday playing dungeons & dragons with sparkling water.

I meant Sunak's behaviour in the job, helping the rich and pissing on the poor.

At my best job we had lan-game thursdays with coke and pizza. It was great for team-building to plant C4 under your manager and watch him go three stories high. And we were the best team in the company.
Русский военный корабль, иди на хуй!

Obviously I think Johnson should have gone ages ago, for lockdown breaches mainly, but in general terms does it matter what adults do on a friday night?

Would have been better if Blair had taken the team to the pub instead of scratching away to the small hours plotting the invasion of iraq and his self-enrichment no?
Русский военный корабль, иди на хуй!

devising some of the most draconian lockdown rules ever seen in peacetime and then flagrantly breaching them, repeatedly, intentionally, just so that you can get pissed on wine at the office every friday, though ... that's something else. everyone else went without 'works drinks' or even drinks at their fucking relatives' funerals/wakes, didn't they?

way to miss the entire point of 'party-gate'.

Christopher got his soft drinks of choice and look how that worked out.

devising some of the most draconian lockdown rules ever seen in peacetime and then flagrantly breaching them, repeatedly, intentionally, just so that you can get pissed on wine at the office every friday, though ... that's something else. everyone else went without 'works drinks' or even drinks at their fucking relatives' funerals/wakes, didn't they?

way to miss the entire point of 'party-gate'.

Way to miss what I said.

Obviously I think Johnson should have gone ages ago, for lockdown breaches mainly

Hancock got the boot for lockdown breaches for canoodling.

No-one cares that MPs drink or canoodle, its the breaches of the covid rules that matter really.
Русский военный корабль, иди на хуй!

my point was that there's clearly a problem with alcohol/drinking culture in the government. as i said, the thread runs right through to the MPs bars (and recent spate of bullying and sexual harassment claims, natch).

maybe having a drug constantly and insidiously present at the top echelons of government isn't such a great idea. most workplaces ban the consumption of alcohol, presumably for good and very well established reasons.

it's amazing that you speak of the 'threat' to the nation posed by people, er, having read humanities at university, but seem to have no problem with the senior-most decision makers running the country being pissed half of the week.

"The event lasted for a number of hours. There was excessive alcohol consumption by some individuals. One individual was sick. There was a minor altercation between two other individuals," said the report released on Wednesday.

At the time, large gatherings were banned to help reduce the spread of infections.

totally normal behaviour in the workplace.