While I think Premium is a good deal and I like the random extras you get on top of the DLC discount, the server queue jumping was the worst idea in history.

It creates animosity between the 2 groups of people, and makes the Premium package look forced onto people. So do the "Premium Player" tags in the killcam. So unnecessary. Sell Premium because of it's own benefits, not by twisting arms and getting in peoples faces.

I don't know, maybe I'm missing this "Premium and not Premium" animosity.

When I see someone that killed me with Premium in their killcam, it says to me that they spent $50 just like me on something that may or may not actually be worth it.

I really don't know what the big deal is. Maybe I'm so jaded lately that I refuse to get worked up about a video game anymore.
Remember Me As A Time Of Day

Well when I say animosity I'm thinking about my brief forays into the Battlelog forums.

Well when I say animosity I'm thinking about my brief forays into the Battlelog forums.

the battlelog forums are like somethingawful and reddit had a baby, put it up for adoption with the dailymail and then was involved in an abusive relationship with youtube comments.
Small hourglass island
Always raining and foggy
Use an umbrella

True.
Immediately after the changelog for the next patch has been released, they'll lock onto a new target to bitch about.

This was something I remember as being common practice in the military. If you tried to go to an on base barber shop, the higher ranks could just walk in and sit down even if you had been there for an hour. The result was the people who constantly got line jumped eventually just finding other barber shops of base or not getting a haircut until they were forced to.

Sounds like BF3 got a bit more military realism added.

Sometimes that isnt a good thing. This is one of those times. Also you dont pay for rank in RL, you earn it.

Pffft.  Nothing to do with race.  All about the money, no matter your race, color, height, weight, looks, etc.  Same as getting "get in front of the line" passes in amusement parks, underhand money to the bouncer/club/restaurant attendant, getting free tickets to play-off games because you're a "buyer", access to events because you are a big donor, and on and on because of the money.

Well after 3 days of wondering whether or not my cheap-assed premium purchase from India would work, and no money being taken from my account, the money has finally gone this morning.

I assume that means it worked.

So did this work for you? I heard EA was getting wise to this and was starting cancel/invalidate purchases that didn't trace back to Indian banks/credit cards...
Check out my YouTube channel

Was thinking about buying this for a second. Saw that it is going for $49.99

Was thinking about buying this for a second. Saw that it is going for $49.99

That price is less than buying all DLCs separately.
You basically pre-order them all for a discount, plus bonus stuff.

If you plan on buying at least 4 DLCs (for $60), you're already cheaper off now (even if you already own B2K and would only need the remaining 4).
For 3 DLCs you would pay $45, which is already close to the $50, but you might consider the bonus stuff worth the extra $5.

The decision is between waiting to see what's coming in the DLCs and paying full price, or trusting DICE and paying less now.
For me personally, the only essential content for a FPS game are the maps to play on.
And even the best maps will get boring at some point, and any variation will be good, so I would most certainly have bought every DLC anyway.
So, why not save money now, get bonus stuff and have no need to care anymore?

I'm quite sure that EA won't sell any budget compilation packs with all DLCs until well into 2013, after the last one is released.

Battlefield games used to have a perfect solution for getting bored with maps. Community maps and mods.
x

Looking at the origin store, I'm pretty surprised to see premium listed at $50 - same as the US - and not the $80 I saw the AU price quoted as in an article. Seeing as BtK has its original price listed as $20 getting premium will save me at least $30.

I still won't buy it though.

CQ holds no interest for me at all. I may get it at a steep discount at some point for the MP5K and SPAS, but those guns aren't worth the full price of the expansion to me. Although this means that with premium I'll still be saving $10 compared to buying the remaining 3 expansions separately, I simply don't have faith they'll be worth the money. AK looks pretty good, but EG and AM are still unknowns and going by the other BF3 maps I'm just not sure they'll be good enough to justify a $50 preorder.
As more expansions are released and discounted, as the early access times come and go, as more double XP weekends pass, I imagine that premium will go down in price over time and depending on the content of AK/EG/AM I could still probably get it and save money. For now, I just don't think it's worth it.

the origin store listed it at $50 for me (UK lol), but after relogging it must have decided where i'm living and showed me the price in £
Small hourglass island
Always raining and foggy
Use an umbrella

the origin store listed it at $50 for me (UK lol), but after relogging it must have decided where i'm living and showed me the price in potatoes

cant hide from me

thanks mutant, reported him for racism.
Small hourglass island
Always raining and foggy
Use an umbrella

Stingray24
Proud member of the vast right-wing conspiracy
+1,060|5359|The Land of Scott Walker

Battlefield games used to have a perfect solution for getting bored with maps. Community maps and mods.

Well after 3 days of wondering whether or not my cheap-assed premium purchase from India would work, and no money being taken from my account, the money has finally gone this morning.

I assume that means it worked.

So did this work for you? I heard EA was getting wise to this and was starting cancel/invalidate purchases that didn't trace back to Indian banks/credit cards...

Well so far I'm still premium. I've played some CQ and still have everything. I don't think I'm out of the woods yet though, I've heard that people are still discovering their Premium has vanished and that they have a refund. I won't be surprised if it happens to me one day as well.

I find EA's solution to the proxy problem rather hilarious. Instead of doing proper location checks and bank checks, their solution has been to double the price of Premium in India.

Shut Up And Take My Money

Shut up and give me a refund.

Make me. If you manage to then share your secret so I can take it to the Battlelog forums.

Quit being such a negative nancy.

Its hard to be positive after being lied to. Anyhow, I'm seeing no premium servers popping up so justice is prevailing. Also there may be a bug where premium members are also line jumping each other which is even more entertaining. Anyone that seriously enjoyed BF2 as much as I did feels the same way.

Everything we asked for was twisted into to sick perversion of what we wanted or completely left out.

plenty of premium servers - most restricted to CQ but there is the odd vanilla premium server here and there.  dont worry you're not missing much, plus you're taking this to heart a tad too much.  have a wank or sutin. 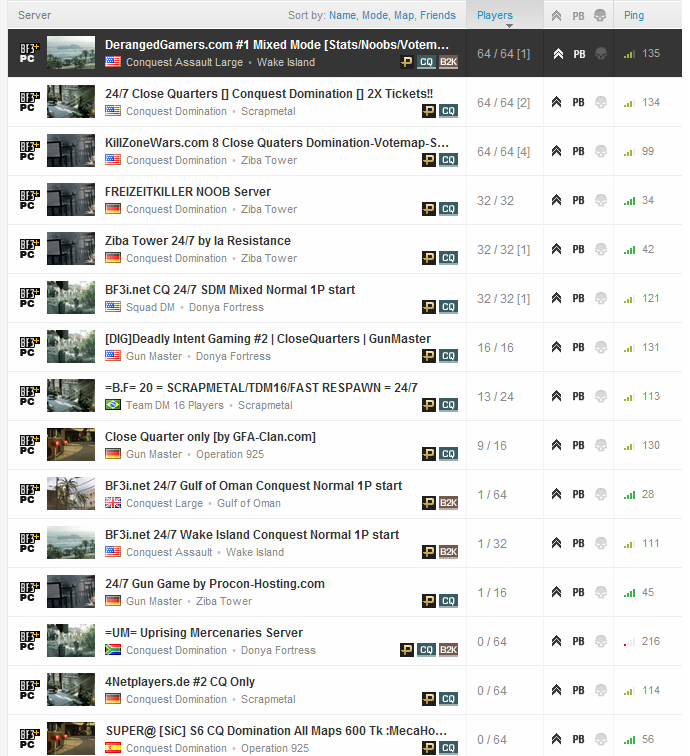 Blackbelts are just whitebelts who have never quit.