Pretty sure 'his' is an unacceptable word now 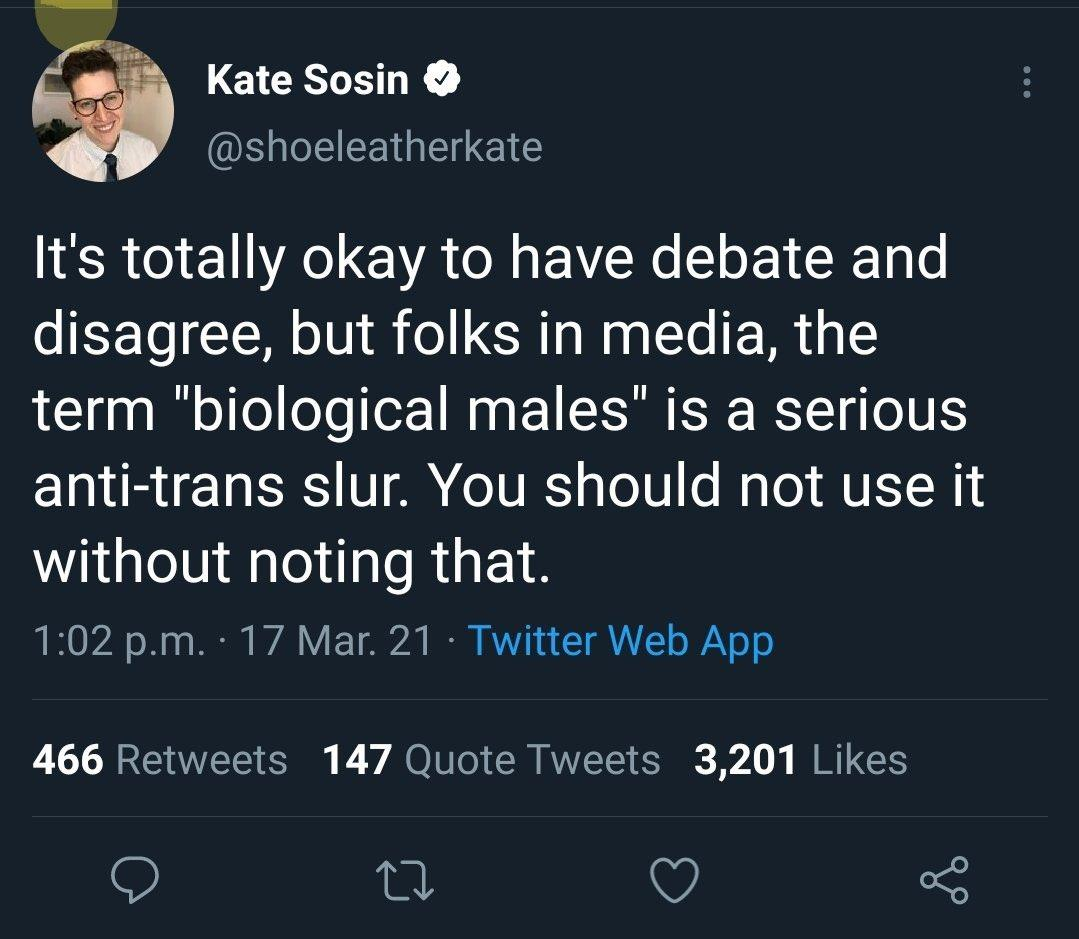 Please use something non-threatening and gender-neutral in future.
#FreeBritney

I think you're missing the context of that. It probably sucks to be a transwoman and be referred to as a "biological male." That's probably something relevant between a person and their doctor, family, or anyone else they want to let in on it. That sort of thing shouldn't be used to hurt and sting people.

Being identified as a pronoun you feel the most comfortable with seems quite reasonable. And just to stop this one early, I have yet to meet someone who identifies as an attack helicopter for anything but the purposes of derision and mockery.

A homophobic cake man is usually going to prefer "he," no?

Abakery that is owned and operated by a lesbian couple in Detroit said it decided to bake a cake requested by a customer who wanted a homophobic message inscribed on the top.

Good Bakes and Cakes said it made the cake but did not include the customer's requested message, according to the Detroit Free Press. The bakery does not typically write messages on any of its specialty cakes, the paper said.

In a letter the bakery wrote to the customer that it later shared with the paper, owners April and Michelle Anderson said they weren't sure why the customer requested the message from their bakery but said they offered him "nothing but love" in return.

"We stand against Hate," the letter read. It identified the customer as David Gordon, who is a writer for Church Militant, a Michigan-based media website. According to Gordon's Twitter profile, he is also a copyeditor for the website.

The message that Gordon requested Good Bakes and Cakes add to the cake read "Homosexual acts are gravely evil," and included a reference to Catholic Catechism 2357. "I am ordering this cake to celebrate and have PRIDE in true Christian marriage," Gordon's order read, according to the Free Press. Gordon paid for his order when he submitted it online and included a tip, the paper said.

Gordon later called the bakery and said the cake was for an office party, according to a report by Between the Lines. In a statement shared with Newsweek, Church Militant said it was not involved in placing the cake order.

Just so we're covering "both sides."

Gordon never picked up the cake, but he later told one of the paper's reporters on Twitter that he was "denied the services I requested at a place of public accommodation on the basis of the content of my beliefs."

The bakery said they threw out the cake several days after Gordon's scheduled pickup time and advised him to place another order if he wanted a new one.

I am embarrassed it was a Catholic who pulled that stunt. I almost never feel second hand embarrassment but this is different.

Even a website called "Church Militant" (publicly) distanced themselves.

I checked the website and it is a lot of Trump shit and sedevacantism. And I have some pretty strong views about what we should do to the sedevacantist someday.

A spokesman for South Dakota governor Kristi Noem criticized “conservative cancel culture” on Wednesday, after Noem received pushback from conservatives for refusing to immediately sign a bill that would bar biological males from participating in women’s sports.

“In the past year, [Noem] was the only governor in the entire nation to never order a single business or church in her state to close. The left bullied her incessantly, but she didn’t cave,” spokesman Ian Fury said in a statement.

“But if any number of conservative pundits are to be believed, that same governor who refused to cave is now caving to the NCAA and Amazon on the issue of fairness in women’s sports,” Fury added. “What? Apparently, uninformed cancel culture is fine when the right is eating their own.”

Noem sent the bill back to the South Dakota legislature last week, saying that the legislation’s “vague and overly broad language could have significant unintended consequences.” The governor appeared to hint that because the bill would apply to college athletics, the National Collegiate Athletic Association could penalize the state’s college athletics programs if the bill were passed in its current form.

Noem defended her decision not to sign the bill in an interview with Fox News host Tucker Carlson on Monday, after Carlson alleged that Noem supported the bill until “big business intercedes, [the] NCAA, Chamber of Commerce and Amazon and tell you not to sign it — and you change your mind.”Well, that’s not true, Tucker,” Noem responded. “I could sign the bill the way that it is today…but it wouldn’t solve the problem.”

“This bill would only allow the NCAA to bully South Dakota,” Noem added. “And it would actually prevent women from being able to participate in collegiate sports. So what I have done is I have asked the legislature…to change the bill.”

Noem suggested changing the bill to apply only to elementary through high school athletics, and to allow athletes to compete according to their biological sex “as reflected on the birth certificate or affidavit provided upon initial enrollment.” The governor warned in a Monday press conference that passing the bill in its current form would amount to a “participation trophy” that could get the state “punished, then we could face expensive litigation at taxpayer expense, and then we could lose.”

https://www.nationalreview.com/news/noe … criticism/
Surprisingly smart decision by the governor to this silly little law. She is now a traitor, social.justice warrior, and rhino according to the brain trust at Brietbart.

The notion of transwomen all being linebackers in dresses who want to go look at your aunt in the bathroom or squash women's sports is rather insane.

On Monday, three Republican state senators in North Carolina introduced the Youth Health Protection Act, a perverse title for a bill that imperils youth health. The measure would prohibit all gender-affirming health care for children and adults under the age of 21. It also requires all “government agents,” including school officials, to report a child’s “gender dysphoria” or “gender nonconformity” to their parents—effectively requiring schools to out LGBTQ students. By Wednesday, the act had drawn four additional Republican cosponsors, meaning a full quarter of the North Carolina Senate’s Republican caucus is now sponsoring it.

Awful bill. Truly disgusting. As an aspiring Dean of students, I would not comply with outing LGBT kids to their parents.

I have read that the battle over trannies is bigger and more important than the fight over gay marriage. Basically the Protestant pig people want to force everyone to conform to their ideas of male and female gender identities in order to regulate and change the lives and habits of urbanites. Men would not be allowed to have wine anymore for instance and we will have to watch football after working with our hands all day.

I rarely drink at all, but when I do (and it's never much) it's not something like beer, but something unmistakably sweet to disguise the taste. I refuse to be swayed by gender stereotype alcohols, and people who fold on that are are probably being less manly and independent than they're shooting for.

Outing a trans kid to their bible thumping parents sounds like a good way to get more suicide kids.

I had a glass of Port the other day and it was way too sweet for me. Give me them dry reds all day.

Conservative Christians always trying to get government to sanction their form of religious belief. Christian sharia law. The Christianification of America continues by the American Taliban.