this is the best card in ages and really evenly matched up, except for the bj fight, i feel like rory is too big and strong for BJ to handle

I was 0-4.  shame.  Rory looked semi impressive, BJ was rocked by body shots.  Shogun looked like a few early blows weakened him.  Diaz looked like he had no clue how to solve Henderson.  Swick looked well, not too bad until getting laid out.

I was expecting the Diaz fight to be a lot closer. Would have been cool if he had gotten that leg lock. I wonder if we will ever see him On a T.V. card again after flipping off Henderson. The ratings for this card was up by a million from the last 3 UFC on Fox cards. How much he had to do with that is debatable though I think he has a ton of mainstream potential.

Shogun needs to get his flabby ass on a diet and try to make 185.

diaz was on the last one with Jim Miller.  It was a title fight - that's always going to add viewers.  Plus BJ and Shogun are legit legends in the sport.

I think Shogun needs to retire.  He hasn't looked good since last year at least.  Even in the Henderson fight (which was a great, great fight) he looked pretty exhausted.

he hasn't looked great in the octagon against solid opponents.  Let's look at his UFC record

His last good win was his knockout of Machida.  The last fight he looked great in was that fight against Forrest.  He hasn't beaten a top opponent in 2.5 years. He looks like he's on his way out to me.  His brother basically had the same arc, but with less high points.  This (Shogun) was a guy who was absolutely devastating opponents in Pride 7-8 years ago.

Prime Forrest who in his next fight took the title from Rampage. 0-1
Legit win Coleman 1-1
Legit win Liddell 2-1
Really won that first Machida fight 3-1
Second win against Macida 4-1
It's freaking Jon Jones. He makes everyone look bad 4-2
I scored it a draw considering Hendo spent the last 2 rounds gassed out and trying to not get finished 4-2-1
Okay he looked bad but still a win 5-2-1
Top 10 LHW 5-3-1

2-2-1 Since winning the championship. 31 years old. Could move down a weight class if he tried. He still has a career ahead of him. Hendo lost back to back flights against Rampage and Silva and then lost to a  welterweight. Everyone thought he was done but he went on finish Fedor. I am not writing him off yet.

Prime forrest still sucks and that title fight against rampage was a travesty of a decision. Hendo lost to shields at 185. Not welterweight.

I know and its not the first time I've heard that argument, I just think its stupid. That's like people saying rousey should fight at 145 because that's what she competed at in judo

Agree to disagree. Who do you think should be next for Anderson Silva? I'm not too interested in Chris Weidman. He's only 9-0 and looked terrible against Maia. I don't see most of the top 10 middles interesting really.

I'm not too interested in Weidman either.  I'd love to see Gegard Mousasi fight him, but he's only a notch above Weidman in the popularity regard.

Yeah that could work.

Lombard is on steroids.

Lombard is on steroids.

Ill agree that he is huge, monster of a middleweight

Same thing with Paul Harris. They both look liked roided out hamsters.

Its crazy when you compare their body types to that of the middleweight champion... 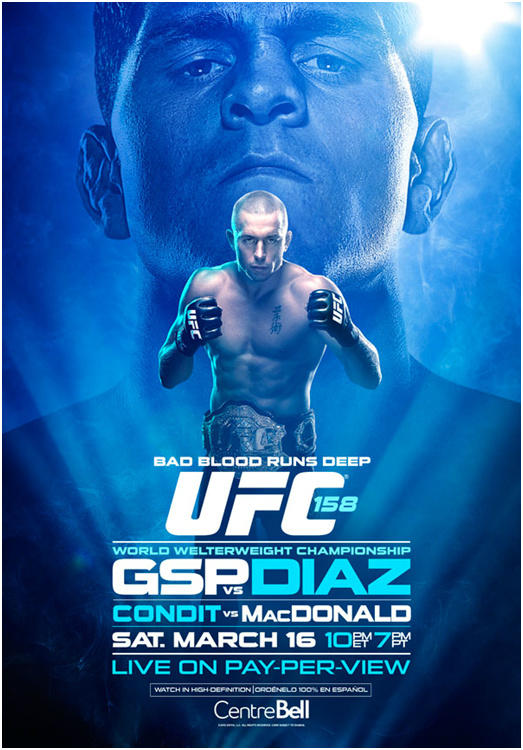 wow, now that was the Cain Velasquez I wanted to see fight the first time!

Felt super bad when they were booing JDS during his interview. He seemed genuinely hurt.

Yeah i was pretty surprised when he was getting booed, its not like he gave up, he was just smashed by the pace of the fight, the sport has some shit fans

Belcher and Boetsch both lost their last. Bisping is promised the next shot if he wins. Any idea what will happen if Vitor KO's Bisping? I really don't care to see Weidman do anything or fight anyone to be honest.