Who else signed up for the beta? Looks to be alright fun.

signed up and got an invite. anyone else?

I signed up for it, never even got a confirmation email.

I signed up, nothing yet.

How can i get it?

here's where I got my info on the pvp system, that was posted back in may 2011 though so it might be completely wrong (or so I hope)
inane little opines

that's old and outdated now. they listened to the community a lot through closed beta tests.

can a mod change the title? GW2 is not instanced. there are loading screens for cities but that's it.
libertarian benefit collector - anti-academic super-intellectual. http://mixlr.com/the-little-phrase/

Yeah I'm looking a lot more into it now

GiantBomb have a lot of gameplay videos of it.

Looks alright, but not sure about long-term playability, unless you really get involved with a guild.

GiantBomb have a lot of gameplay videos of it.

Looks alright, but not sure about long-term playability, unless you really get involved with a guild.

not sure if serious

"not sure about long-term playability" of mmo unless you get involved with community?

i'm guessing this will be baby's first mmo? they are all tragically shit experiences if you play on your own and make no effort to integrate to a server community. they just become -rpg's then with a specific lack of single-character development.

I played the beta a couple weeks ago and had fun with it. I played alot of solo, with a couple friends, and with random groups. the game world is huge and there is plenty to do for what ever play style you like. you can play alone but why would you?  it is alot more fun in groups and even more so with friends on voice coms. the main reason I never bought Skyrim is because it's single player I don't care how good the game is I don't want to play alone the whole time.

Skimmed through it and might've missed something. Does anybody know if they're still going to use the ancestry bonus they mentioned before, giving you titles for a previous Guild Wars account or something?

yeah you will get prestige titles according to how much of your champion achievement things you do in the original guild wars.

e: to clarify, you won't get any title or recognition for merely having played guild wars. you must have completed a significant part of the endgame. you can still work on your progress now ready for the gw2 launch if you care about it.

Well, that probably counts me out. I've only completed vanilla, Eye of the North and about half of Nightfall/Factions. If I got something like an item for Legendary Survivor or Defender, that'd be cool.

I suppose I could always bite the bullet and finish them, but I'd have to stitch together more armor after my account was broken into.

I wonder if this is retroactive. I mean, if I could work on GW1 here and there after GW2 comes out, that'd be a bit less pressure.

nope. it has to be before the launch afaik. it's a veteran-type thing.
libertarian benefit collector - anti-academic super-intellectual. http://mixlr.com/the-little-phrase/

IIRC the HoM FAQ on guildwars.com says that you can go back at any time after launch and get the titles you need.

That page also tells you what you'll get for what you have.

oh, i was mistaken then! from the gw2 pages i browse from time to time i was under the impression all the old gw1 players were in a hurry. good news for you newbie.
libertarian benefit collector - anti-academic super-intellectual. http://mixlr.com/the-little-phrase/

I like the game tbh but still have some doubts about it. Movement looks floaty like it did in WHO and I wonder if WvWvW pvp will be any good. Other than that, it's too bad the game doesn't have any opposing factions. Titles seem rather dull as well and imo there's an overuse of dark colour schemata in the game. Those are minor complaints though, the game combat looks very good compared to pretty much all other mmo's.
inane little opines

i can send you a scroll of resurrection for WoW if you really like
libertarian benefit collector - anti-academic super-intellectual. http://mixlr.com/the-little-phrase/

I do have some serious nostalgia issues, but no thanks . Looking at the state of the game I think I'd rather cherish my memories.

No opposing factions and a lack of in-server world pvp make me wonder whether real pvp rivalry is going to be possible.. in the arena segment you'll probably only meet a fraction of the playerbase.

While the lack of colour may not seem like a big deal it does make a game boring after a while tbh. Looking at a million different shades of brown/grey gets old fast.
inane little opines

some of the best and most highly-rated mmo's of all time have pretty modal colour palettes. i loved WoW's art-style too but enough is enough after 6-7 years of it. i don't need bright cartoon graphics to amuse me. and to be fair all we've seen so far in gw2 is mostly low-level play and beginner-start sets of items. i don't remember the early level gear in WoW being all that appealing and visually striking, either. in fact i remember it being boring browns and shitty colours, too. even the game's early max-level items were pretty boring to look at - before they added proper endgame epic tiers. so bear that in mind.

the whole point of the lack of in-server pvp is that WvWvW creates server-based communities who compete on a server vs. server basis. that sounds far better to me: league tables of servers, entire server reputations. earlier on in this thread we were just discussing the lack of cohesion in WoW after cross-realm and looking for group tools, no? well here's a system that unites every player on a server into one collective group with one focussed aim. and that's just one side of the gameplay. guild wars' specialism has always been in small, team-based arena pvp. in that regard gw1's pvp was far better than WoW arena ever was. there will still be plenty of opportunities for guilds and pvp teams to distinguish themselves in small-scale competitive combat. so it caters to both sides of things, really. i'm not sure about open-world PvP. i'll miss it if it isn't in the game, that's for sure. and it will be a loss to not always look over your shoulder, fearing an enemy horde/alliance player. but the game has enough new elements to make that loss not so bad.

y I'm waiting for them to showcase more game zones. So far we've only seen foresty areas and snow. The concept art for some end-game armor looks pretty good; 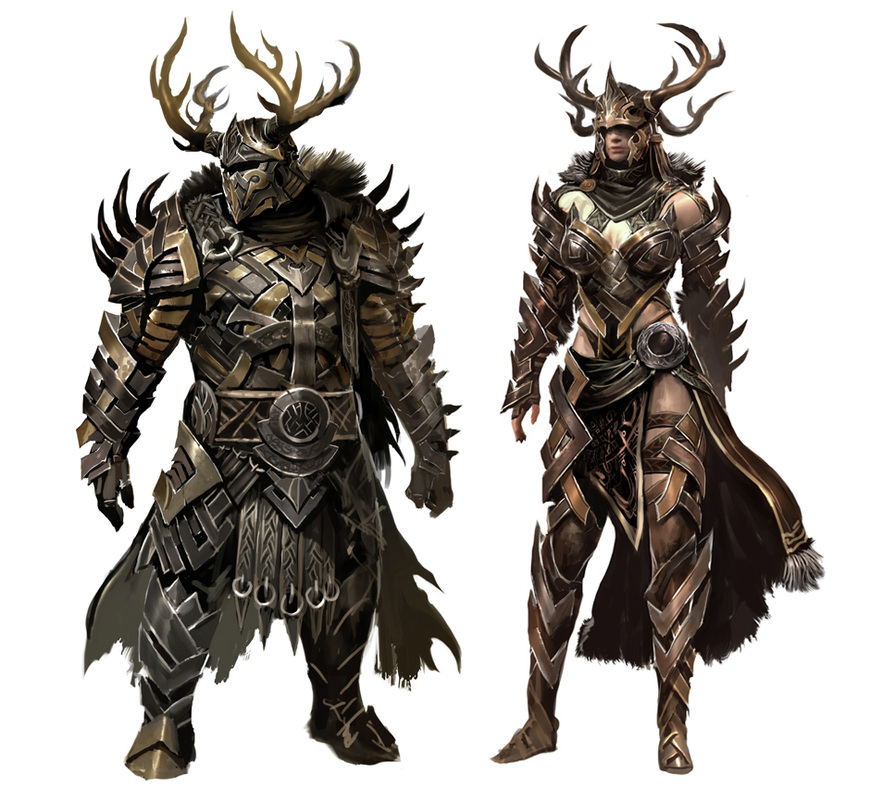 I think I read somewhere that WvWvW lasts for about 2-3 weeks, does that mean they rotate servers every 2-3 weeks or will there be pauses inbetween?
inane little opines