Lost my UFC PPV virginity to this one. It was worth it.
Spoiler (highlight to read):
The Diaz fight was great. Too bad it wasn't a five round fight. Overeem is a monster. Seeing those knees shake Brock's entire body in the replays was something. I'm looking forward to Dos Santos vs Overeem. I just hope we Overeem didn't fail his piss test.  RIP Brock's career.

dos santos has no chance

take down and submit him is probably his JDS best strategy.
Blackbelts are just whitebelts who have never quit.

Lesnar retires, too bad - he was fun to watch.
inane little opines

I particularly liked watching him break dance against Cain 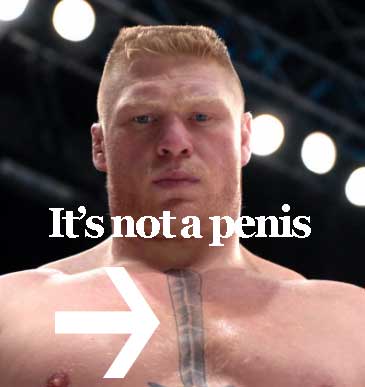 Guy could take a beating though. No idea how he survived that Carwin assault.

Ubereem has to get licensed to fight first.  There's been rumors that he won't be allowed to fight, but I just read up on his appointment with the Nevada State Athletic Commission and looks like he'll be granted a license as long as his piss test he submitted comes back clean.  Apparently the NSAC tried to get him to take a random drug test back in Nov. and he immediately flew back to Holland instead of submitting the test, then provided a blood test.  Might mean nothing, but ever since Overeem moved up from light heavy and bulked up to his current Ubereem physique he's been dogged by steroid rumors.  This definitely doesn't help his case

Everyone in the heavyweight division is being dogged by steroid rumors, it's getting tiresome tbh. As are guys in the lighter divisions.

Aldo is such a badass

Right after Guillard got submitted on FX his fight against Lauzon was shown on Spike. Talk about deja vu.

The upcoming UFC on Fox and 143 both look very interesting.

UFC on Fox should be decent. I'd love to see Bisping get his face smashed in.

I'm really excited to see nick Diaz fight. I want him to win so he can fight GSP already


I know it's old but I love watching that fight. Can't want for them to get into UFC

Well that was disappointing

both the diaz bros need a good jaw jacking. I would like to see him pull that come at me bro shit with GSP.

So are these UFC on Fox things going to be regular things? The UFC on Fox 3 event looks pretty good. Can totally get used to these.

yeah, they signed a 7 year agreement with Fox.  Free fights also on FuelTV and FX.  There's a free fight on Fuel this wednesday.

Free 3 months of UFC tv if you do their little fb promo
http://www.reddit.com/r/MMA/comments/ps … t_library/

A lot of great events coming in the next few. At 146 I'm giving it to dos Santos. How about you?

I'm giving it to Overeem, elite kickboxing man... not taking anything away from JDS but, its gonna be one sweet fight

What an intense main event last night. Really, the fight could have gone either way.

I thought Ben won all the way. Look at the damage. I'm not a fab of Frankie Edgar at all. Just listen to his post-fight comments - 'I thought I did enough to win.' How about you try to go out there and do a little more than enough to win. He got lucky with that Grey Maynard rematch. In all his fights he looks like he's just trying to do enough to win. It's the wrong way for the sport to go. We want finishes!!