Grand Theft AUTO is a giveaway that it cant be

Yeah, a GTA with only Model Ts wouldn't make any sense at all.

I'm just hoping for most:

Planes
Large, SA-esque landscape
Keep guns once you're out of ammo
All the over the top shit from SA and TBOGT 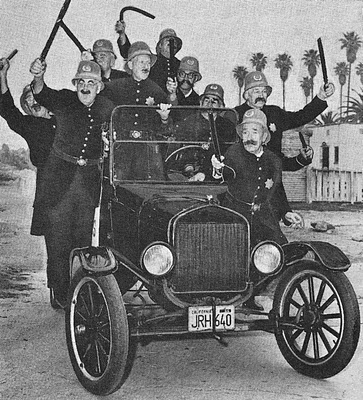 also VC is probably my 2nd fav game ever behind bf2 so that would be sweet (to whoever said it wasn't), but they've done that so they probably won't. my guess is itll be modern but in a new city. trouble is you can't really do much more than NY and LA which have already been done recently as well.
Chicago? maybe...
DC? Not after 9/11 they sure won't.

Maybe somewhere overseas (to the US). London again? guess we'll just have to find out.

I'm going to give you a few minutes to realize how dumb this comment is.

let's put planes and the city of DC in a game? sure that wouldn't stir up any emotions...

what with all the planes in IV

and you could shoot and kill NYPD-looking cops one month after 9/11 in GTA III.

is this like the patch that took the twin towers out of microsoft flight sim?

never has NYC been attacked by a chopper (to my recollection... correct me if im wrong) and thousands of lives lost.
on 9/11 the terrorists didn't go around on foot shooting NYPD

(and i doubt you can add or delete that much of a game a month before release... if that's what happened on 9/11 i'm sure they would have halted the release to change it or at least come out with a patch very quickly)

i just think it's kind of silly to totally kill the idea of a DC GTA + planes due to 9/11. it's over 10 years now, and yes it still stirs up emotions for some people but we're long distanced now. killing cops may stir up emotions for some people, but those people will never be satisfied until you have the main character as a carebear shooting people with a love gun. i really doubt rockstar would care

don't get me wrong, i think it would be cool to be in DC (actually i don't really care just someplace new, Miami would be fine if it was present and MIAMI) I just doubt they'll put it in DC

hawaii? (maybe not for the same reason? I know it sounds ludicrous but you KNOW if they did, someone on Rockstar would bring it up)
chicago?
"out west" (from the indian/dollar bill connection...) with a bunch of smaller towns with tons of land in between them? it'd sure be a switch from IV
london?
sydney?
tokyo?

Underwater with side missions to small atolls and islands

Still hoping for DC/PG County(Fuck Montgomery county/Northwest DC, they had Fallout 3 already dammit) personally but I won't hold my breath.

They usually only do one of any of the three cities they've already done which are Liberty City, San Andreas, or Vice City

Vice City I think would be played out by now unless they revisit the 80s(fuck that) or they come up with some other intriguing story for some Puerto Rican/Haitian character or something in the present.

San Andreas is easily the more flexible of the two: big cities and rural areas both with tons of land, and it should work great and be more fun than ever now that they've gotten used to the engine

hey PG had its hour in Fallout with Andrews AFB

hey PG had its hour in Fallout with Andrews AFB

MoCo had more than half the map in that game; time for PG to get it's own.  Obviously Bethesda only did it that way because they're HQ'ed in Rockville.  I'll bet everybody from PG that played the game was pissed, lol

College Park would've been AWESOME in Fallout, don't even lie

I wonder if the location has anything to do with the trailer's release being exactly 12 PM Eastern time.  Although I wasn't keeping track for the San Andreas release, lol.

I wonder if the location has anything to do with the trailer's release being exactly 12 PM Eastern time.  Although I wasn't keeping track for the San Andreas release, lol.

Rockstar's main offices are in NYC, so I doubt it.

It's been a while since I've actually been this excited for a game trailer/teaser, I can't wait.
Check out my YouTube channel

My friend who spends many more hours than I on the internet told me he heard it's gonna be San Andres but even more expansive.
x

My friend who spends many more hours than I on the internet told me he heard it's gonna be San Andres but even more expansive.

Makes logical sense to me anyway

whats to separate chicago from nyc

Chicago isn't as notorious as LA or NYC. I would love a redone San Andres. Imagine the desert sprawl with a level of detail like Red Dead. Then the cities with the detail of IV.
x

Heard a rumour somewhere that it's in a DC-esque city and you play a corrupt politicians brother...

My god I hope so.
Serious Flex