no, you really don't need to give elon musk anymore government money and public subsidies to 'bore tunnels' for more car traffic. you are are deluded.

yes, those tunnels carrying 1 car is the most efficient mode of transport, imagine the fuel savings! if only someone can invent a technology that can fit more than 5 people into a car... what if its multiple cars running on rails in a tunnel, mein gott traffic will be solved!

amazing, isn't it. if we only give this one apartheid narcissist billions of dollars i'm sure he can 'tony stark' a solution.

put this guy on the cover of TIME magazine! he's invented ... a subway! 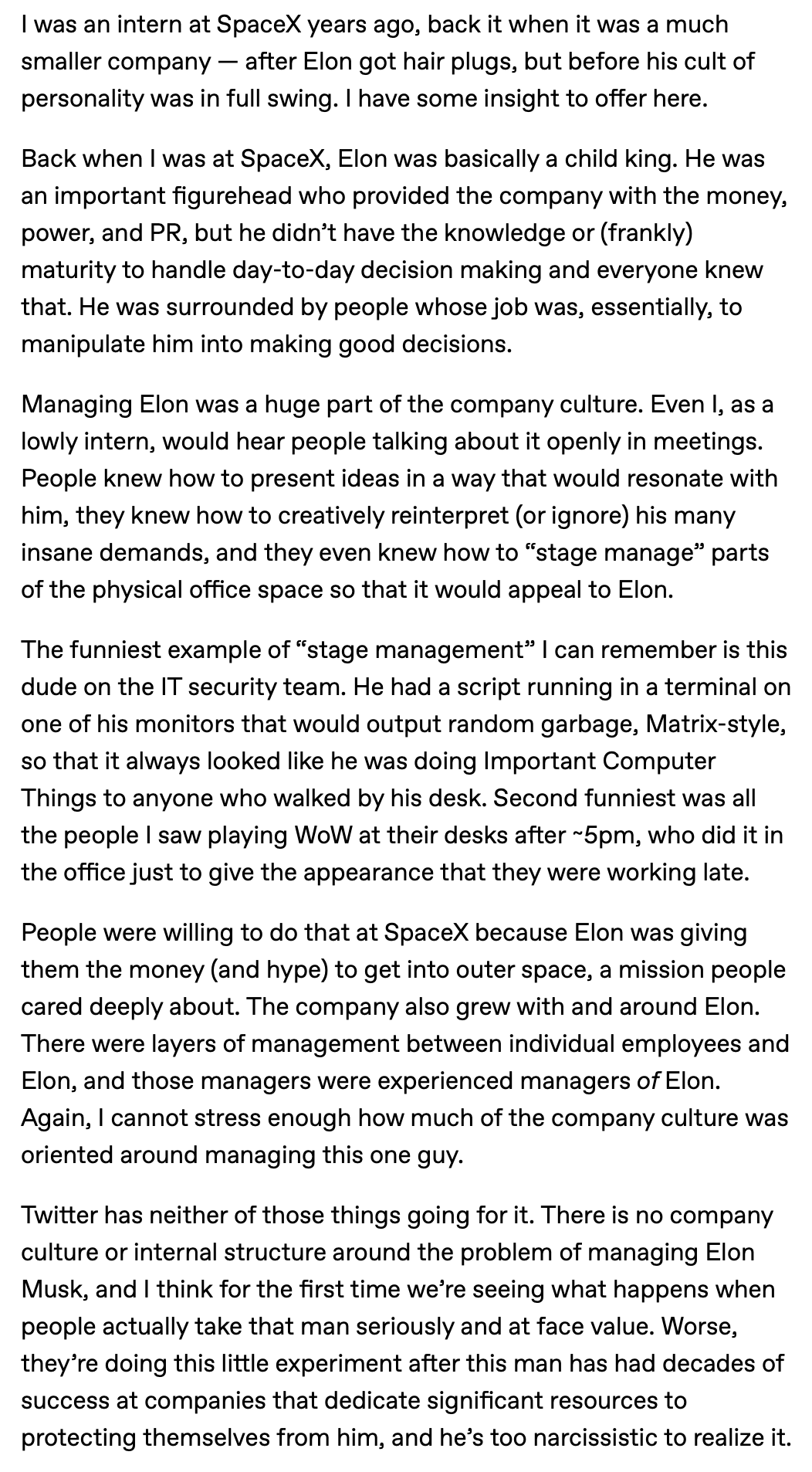 Black slavery is in the past, everyone is a slave now.
Русский военный корабль, иди на хуй!

the CEO absolutely does not have the expertise to single-handedly run a publishing house. LMAO what the fuck are you smoking. you think the CEO has an expert grasp of copy-editing, typesetting, legal and copyright permissions, graphic design, web infrastructure and databases/archiving/indexing, marketing, current trends in AI and machine/deep learning, institutional politics and current debates around open access, etc? and this is a relatively medium-tech publishing house, not fucking rocket science.

There seems to be a gap between what you're trying to say and actually expressing it on paper.

You can work on that.
Русский военный корабль, иди на хуй!

you claiming that the CEO has a complete grasp of every aspect of the business is just not the case in most medium-to-large scale organizations. that's why they have talented management. the CEO is a figurehead and a person in charge of setting objectives, strategy, etc. they are not masterminds who intimately understand every aspect of their business, not in large and complex organizations anyway.

you have persistently tried to represent musk as someone who, with his non-physics degree, 'understands' engineers and rocket science/EV tech. it's total nonsense, of course. you've fallen hook line and sinker for the most silly of PR image campaigns. 'musk sleeps on the floor at the tesla factory'. why? he doesn't know a single fucking thing about EV tech or software. saying you want to study it at stanford doesn't make it so.

you can work on reading a book instead of being arrogant, condescending, and generally toxic.

no, wage slavery is not the same as actual slavery.

you're such a whiny little bitch, honestly. you live at home and you're moaning about work being akin to slavery? do you even cook your own meals and iron your own shirts?

Black slavery is in the past, present, and future. A significant blemish on history that consequently shapes people's lives today. Entire genealogies and social constructs, preconceptions shaped around it and the racial pseudosciences. People had misgivings about a "Negro President" in 2008 for crying out lout. Even old Democrats, "how could they do this to us?"

Where did I say that?
Русский военный корабль, иди на хуй!

Black slavery is in the past, present, and future. A significant blemish on history that consequently shapes people's lives today.

I'm sure WW2 had a significant impact on the arc of the _X clan.

When is everything going to be about me?
Русский военный корабль, иди на хуй!

Musk will save us all, wait and see.
Русский военный корабль, иди на хуй!

WW2 had a catastrophic impact on a lot of families, yes. How exactly does that invalidate other events in history?

Why does slavery invalidate other events in history?

You'd think blacks were the only people to have had a bad time in the history of the world.
Русский военный корабль, иди на хуй!

I never said it did? You're the one calling it unimportant because of, er, WW2? Why does everything come back to WW2 with you?

You'd think blacks were the only people to have had a bad time in the history of the world.

We're just coming off of the tail end of a lot of recent publicity about the historic mistreatment of indigenous americans. Even the pope apologized for the whole residential school fiasco.

I've even made mention of the forced relocation of indigenous americans to the Caribbean to work plantations there.

Even talked about Australia's treatment of its own indigenous populations. Nowhere did I ever say that black people's tragic history in america overshadowed that.

i was pretty sure youre taking the piss but i wasnt sure.

Does anyone know about those though?
There's world engineer's day too.
https://nationaltoday.com/world-engineers-day/

I mean when schools are given over to it.

Italian-American Heritage Month is in October. Christopher Columbus enjoys time in the spotlight there, impervious to retrospective criticism in some circles, as well as his own US federal holiday (cringe) the same month. This doesn't exactly fly under the radar in the states, although prominence can increase depending on where you live.

Native American Heritage Month and its other name variations has been in November since 1990.

School spent a large chunk of time on both, although the quality and scope of history taught could be improved, along with black history month's.

e: Claiming schools are "given over" to any of these is probably an exaggeration. From my recollection, there was a lot of bellyaching about it on conservative radio. But in-person, other subjects weren't really neglected for the sake of, er, Columbus Day. We didn't get February as time off away from math homework, either.

This is really about the same brow level as the drama about Blazing Saddles.

lol it's amazing to see dilbert log on here every day to scrape the barrel of the most fatuous arguments. guy must be existentially bored on a level i cannot even fathom.

so it turns out elon really is firing his most talented and senior staff, at short notice, on a whim (during thanksgiving …), and then complaining elsewhere that the H1-B visas are not good enough for his purposes.

you really can’t make it up. daddy elon is firing all the talent and dilbert for some reason is trying to make out that the people commenting and speculating on his antics are ‘racist’. lmao

My conditions for returning would be triple+ pay and the understanding in writing that I could leave for another job any time I wanted to as abruptly as I was let go.

Maybe an additional commission for every problem solved. Could probably think of others if I sat down for this hypothetical.

More from the American wackadoodle factory:

It Only Takes One Parent to Get All The Graphic Novels Removed From a School Library
A school district in Oklahoma removed 3,000 titles after an angry parent complained about ‘pornography.’
https://www.vice.com/amp/en/article/g5v … ol-library

All graphic novels in the school library’s collection were recalled after parent Tim Reiland took issue with the school letting his teenage daughter borrow Blankets, an autobiographical coming-of-age story by Craig Thompson about questioning blind faith in a fundamentalist Christian household.

This prompted the district to undergo a self-audit of graphic novels this fall to ensure their imagery comply with its policies. The district said that Reiland isn’t the only parent who has voiced concerns over library policies and books in the library’s collection.

However, Reiland is apparently the only parent who has sued the district, claiming a violation of his First Amendment rights. The night that a federal court sided with Reiland and prevented the Owasso school district from banning the man from the school’s campus, the changes he wanted made to the district’s policy draft were approved. A previous draft of the policy did not include mention of pornography, which Reiland took issue with.

"I actually feel great, it's almost verbatim what I told them that I wanted them to add into the policy in the first place," Reiland told KTUL after the meeting.

Reliand did not respond to Motherboard’s request for comment at the time of publication.

long but amusing in parts