Got small desk heater. Sadly the mode I'm using has three active LEDs in addition to a 7-segment display for temperature. At least one light is always on even if I have it turned off. Going to have to make a flap out of electrical tape so I can read what I'm doing when I need, and not have my room lit up like aurora borealis while trying to sleep. At least it's quieter than AC.

10000 pennies from the bank. I'm trying to find an Indian cent
gang shit

I know someone who is a coin noodler, I imagine it drives bank tellers nuts.
Русский военный корабль, иди на хуй!

Sharpening machine works pretty well, its fairly slow but gives a perfect result and still 10x quicker than grinding by eye then honing, pretty sure I'll be fine without honing. Also no risk of burning the blade which is nice.

I thought the concave edge would set off my OCD and make me regret not getting the 250 dia over the 200 (the bigger machine is about twice the size) but its barely noticeable.
Русский военный корабль, иди на хуй!

You'd think meme-OCD would be beaten out of engineering students not far into college, given how many things have tolerance ratings and real-world expectations and practicalities.

Yeah pennies will probably be phased out eventually, just like half cents were. Canada did I'm pretty sure. There's just something cool and old school about them tho. I'm not into other coins, just penny. I buy a box or two here n there and try to find old wheat cents etc when I'm bored. I've also found a bunch of random foreign coins in the rolls
gang shit

A frequent defense of the penny I encounter is that pennies are important to poor people. How poor do you have to be to value a penny when it takes so many to buy even a sack of beans. People that desperate should be lifted up, and not used as an excuse to prop a largely obsolete coin.

I get the collectors' point of view, but like it costs more than a penny to make a penny.

So yes, the coin’s face value is less than its actual value, because it actually costs 2.41¢ US ($0.0241 US Dollars (USD) to be exact) to make each penny. The face value of this coin was exceeded by its cost for the first time in 2006. This was due to a decision at the United States Mint, the agency of the government that prints money and strikes new coinage for the US when the composition of the penny was reconsidered.

The parts that are having the biggest impact on the final cost of making a penny are the materials that are used to make it. Pennies have that distinctive coppery color because they contain 2.5% copper. The other material used is zinc, 97.5% of a penny. The cost of metal extraction is much higher than in the past, because of all the new regulations of mining. This has made the prices of the metals used to make a penny rise dramatically in the early 21st century.

The people complaining about the cost of making the penny are missing the fact that the money serves a purpose rather than being made for profit.

I don't believe you

Apparently we're going to stop minting them in 2023. Good. I don't care if it makes people feel angry and nostalgic. Hopefully we won't keep making nickels into the 2200s. A dollar bill alone already feels rather useless. When I'm fishing around for grocery payment I always just grab the 5s, 10s, 20s. The 1s just thicken my wallet, and exist to wrap around pennies when I get my change back, and create more mess when I empty my pockets at home. I'm not saying discontinue that, but with living costs the way they are why do people in such a rich country have to carefully curate 1 dollar bills. A stack of $1 million worth of 1 dollar bills would be the height of a large office building.

I don't even use case. I carry a 20 just in case though

I always carry cash in case something happens with my card. It's galling what $20 alone won't buy you, probably not enough for emergencies. I suggest getting a clip if you don't like having a bunch in your wallet.

I have 2 cards, and a debit for ATM withdrawals on trips if needed.
I bring more cash on trips but have never needed it.

Always good to make sure you have some cash stuffed away in your center console and desk drawer.

I have a container I throw extra $1s and $5s into when I get home and empty my pockets. It's been about 5 years. I'm gonna buy my nephews and neice some presents with it.

Next time you hit a deer on the way to work, stuff a fiver in its mouth. It's good luck

I've only scraped a deer. It lightly hit me after bouncing off of a pickup going the other way

That's a lot of dick pics before you have to return it.

its telephoto so itll really help see it

aaaand there it is

I went to Black Friday at the mall. Disappointing. First off, no mall opens at midnight anymore. They are open at 6 or 7 AM. There was also no shopper on shopper violence. 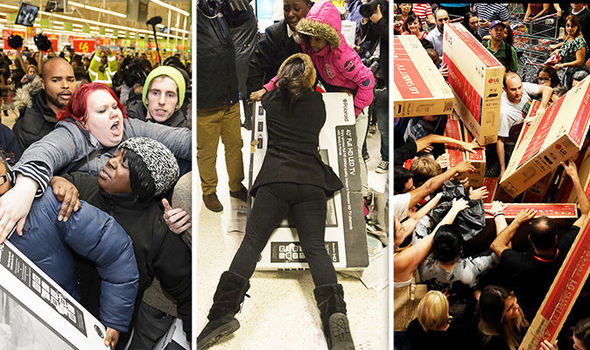 Malls need to stop being cowards and allow some bloodsport.