LOL i just learned the 'manosphere' was a thing.

funny that it exists or funny that i was blessedly ignorant of an 'anti-feminist' corner of the internet full of losers who can't get laid?

Funny that you're so far behind the zeitgeist.
Русский военный корабль, иди на хуй!

I don't make a study of incels. I didn't know the specific word for (barf) 'manosphere,' but I knew its elements. It's a pity that it overlaps with parental rights. Imagine being a dad fighting for visitation rights and you have to share an abstract concept space on wikipedia with PUA, MGTOW, misogynistic mass shooters, and alt-right bs in general.

Imagine being a self-avowed, hyper masculine alpha male in the way these groups regard that, yet calling yourself 'red-pilled.' Borrowing from a movie filmed by two transgender sisters.

I think at least some of these woman-hating mentalities were seeded by overprotective parents warning sons that their female friends would get pregnant and falsely accuse them of fatherhood. The woman is the enemy!

Funny that you're so far behind the zeitgeist.

erm i don't think 'the manosphere' is the zeitgeist. you could just as credibly claim that trans-rights, LGBTQ+, BLM, et al are the 'zeitgeist'.

what a bunch of dysfunctional goobers get up to on the internet, in between taking heart-choking bulking supplements and promising each other not to jerk off to 'build alpha energy', is entirely up to them. let's not pretend that niche subcultures and groupuscules are 'the zeitgeist'.

i study contemporary culture. i go to galleries and museums. i read, and read widely. i actually, you know, go out and interact with many different types of people. i socialize and exchange views and opinions with people. how are you plugged into the zeitgeist again, chump? what's the vantage like from your parents' wood-panelled office room? no wonder you put exaggerated importance on the views of internet shut-ins.

didn't you earlier just claim that an instagram feed wasn't evidence of anything? because it's not a 'real site'? now i'm the one supposedly missing the zeitgeist? LOL.

I think at least some of these woman-hating mentalities were seeded by overprotective parents warning sons that their female friends would get pregnant and falsely accuse them of fatherhood. The woman is the enemy!

it's much more driven by population/eugenics/replacement theory-adjacent stuff about '90% of men not existing to women'. it's about them not being able to get laid, not about family planning. most of these insecure dudes have a complex about 'chads' who 'monopolise' the top percentiles of attractive women. a lot of their angst comes from the fact that, in an algorithm-driven age where people meet on dating apps, there's great filtering mechanisms in place that let the hot women hook up directly with the top-crust guys. that leaves the great average bell curve 'without pussy', apparently.

this is why it's exactly dilbert's thing. single-for-lifer who has to pay women for time and attention. sad!

Well, yes. But key word: some. I have heard and read some of the rants and stories. It's come up more than once, and I think it fits into the many-pieced puzzle.

There are things men could do. Seek therapy for an attitude adjustment. Pick up on better hobbies. Take a shower, apply deodorant, get in shape. Unsubscribe from all the alt-right womanhater crap and stop posting on nazi forums. If they think women owe them something and aren't paying up, they are not 'misunderstood good guys.'

Some people are incels because of the things outside of their control.  That's unfair but life can oftentimes be full of unfairness. I am strong believer that if you want someone to love you, you need to make yourself lovable. Work on yourself etc.

I understand I can't give advice like this though since Newbie said I am a predator. 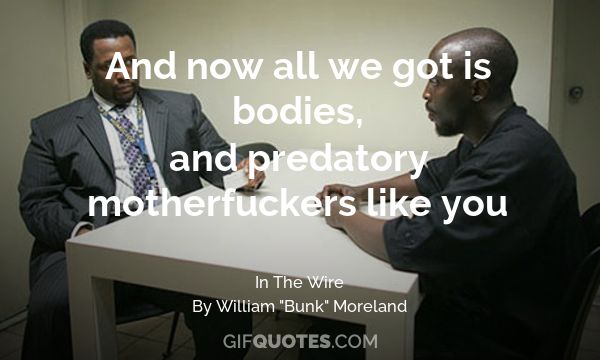 it's an obvious irony that any guy who goes down the wormhole of the 'manosphere' is just making himself less and less attractive to any well-adjusted member of the opposite sex. girls are not exactly appreciative of the PUA, alpha male dog, treat-'em-mean schtick.

I really don't know what is so hard about dealing with women. Every girl is like super impressed I will look at them while they talk, listen carefully, give follow up questions, etc. Ask them about their day. Talk on the phone etc. What are other guys doing that basic stuff I am doing works so well?
...

I think the PUA isn't totally without merit. A lot of it seems to be about boosting the confidence of guys who don't have much. I assume there are some PUA out there who are less problematic in their advice. I did see a guy on YouTube whose grift was giving women dating advice and also being pretty PC about it all. Interesting angle.

"Dog people" are also very defensive of their pet of choice. People who don't like being around dogs, for whatever reason, are regarded with suspicion or disdain. "I don't like anybody my dog (or dogs) don't like. Or who doesn't like dogs. They must be very nasty people." A whole meme. Mac logic, only not trolling. Again, lots of terrible, obnoxious dog owners out there.

One thing I don't appreciate is having unknown dogs run at me and leap at my face either in a public place or in people's homes.

The response is always the same "Don't worry, ee won't hurt ya, ee's a big softee, wassamatter - doncha like dogs? If ya don't like dogs yer can fuck off."

Maybe Australians are more blunt about it. I usually just see Americans get this sad look of pity that someone doesn't want to be dug at by dog claws or slobbered on by someone's pet.

I am once again asking you to look at the cat game, dilbert. 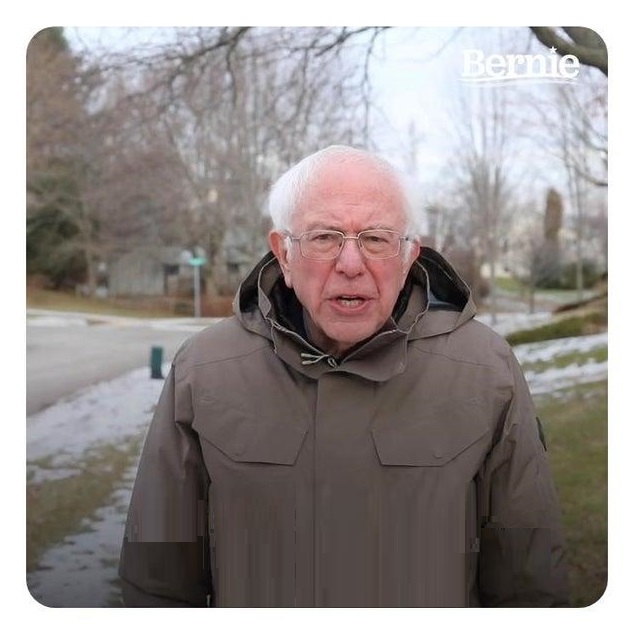 Part of the joy of going to a bookstore is conversing with employees and patrons about books. I've had people ask me about authors or titles I had at checkout and we've exchanged opinions and enthusiastic recommendations. It's pleasant. It's a sad thing if Dilbert was being literal about snapping at the cashier who asked about the Heinlein book for "prying into his private life" or whatever. Hopefully that's just manufactured, because my goodness that sounds completely miserable.

Look at this place though. 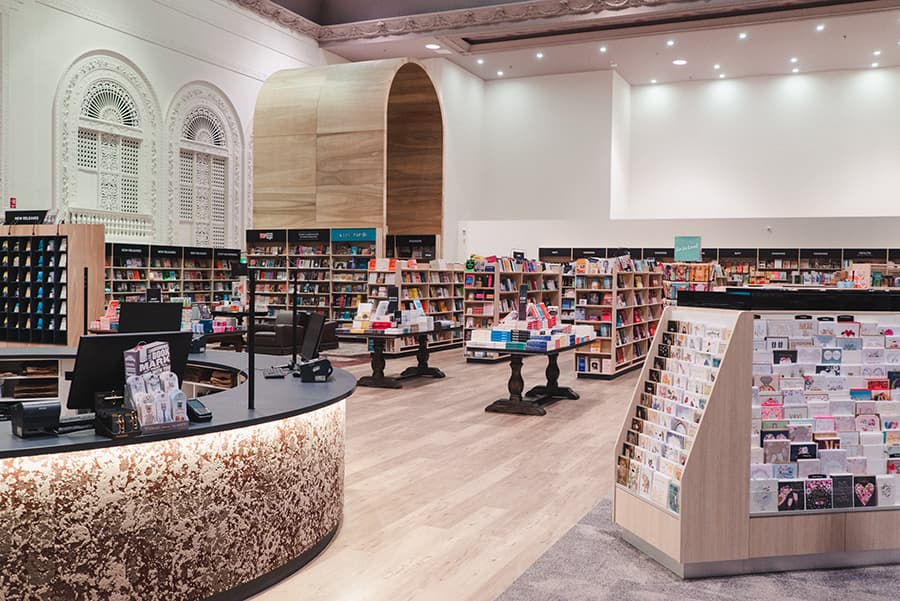 What do you mean, "look at this place." There are warmer, cozier layouts to be sure, but it to snap at someone who works there for … this reason? What's wrong with you? 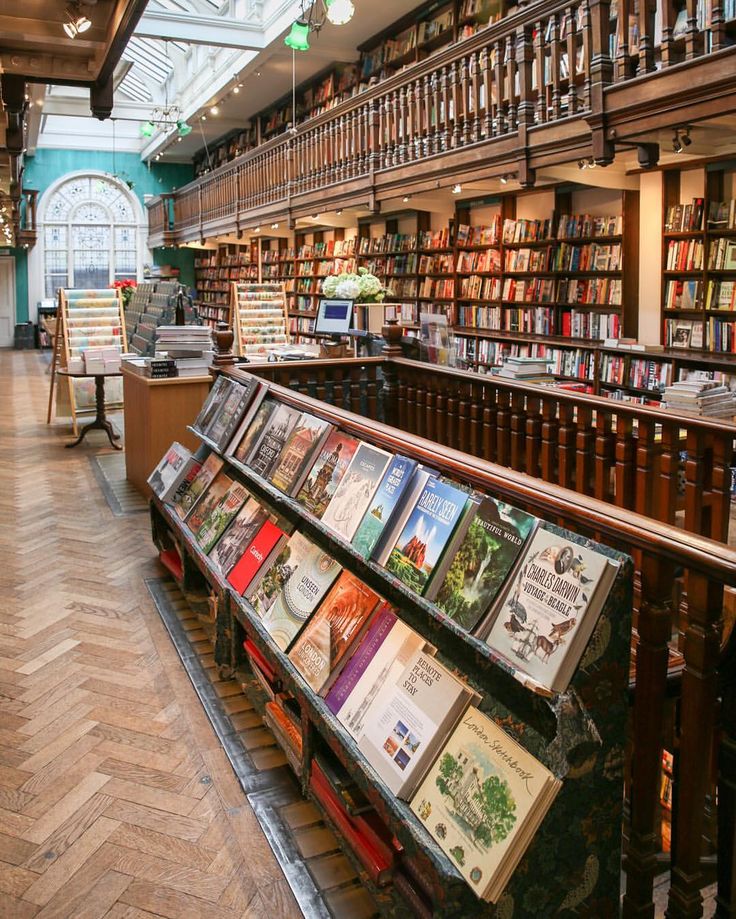 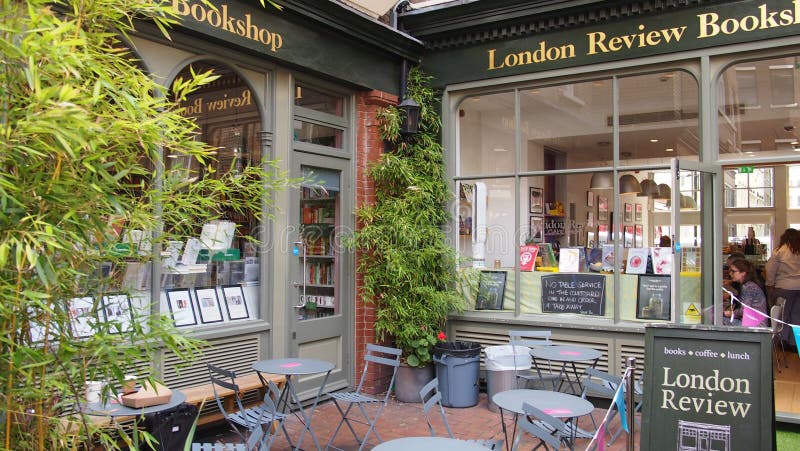 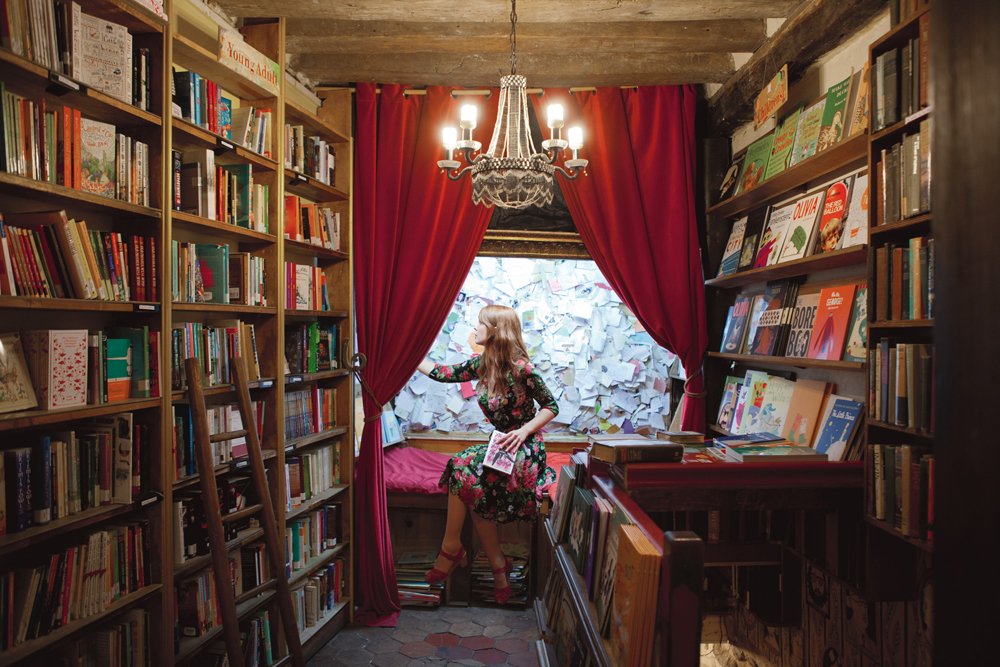 Would definitely browse. Closest thing I have is a B&N with a Starbucks annex.

daunt books, LRB bookstore, shakespeare & co. in paris. definitely not the norm – we have our share of B&N-type bookstores too.

but i'm happy that most medium-sized towns and up have at least one independent bookstore, against all the stacked odds for brick & mortar thesedays.

you can have good surrogate 'bookstore' experiences in charity shops, if you know the right ones in the right neighbourhoods. i've picked up some amazing hardbacks, old editions, rarities and miscellanies, etc, in charity shops in well-heeled areas. lots of old monied and educated types giving away their library spares. i don't mind that one bit.

I traveled more when my work was less office-centered, and visited a lot of second hand stores I came across. While the bulk of it was tired mass market paperbacks and droopy hardcovers, I did find a few hidden gems. Second hand stores dedicated to books though with a selection I could browse all day are a trip out.

Don't get me wrong, I appreciate the B&N. Brick & mortar nostalgia, new books that are actually in 'new' condition, generally friendly patrons, friendly staff. It's the only place I've seen (in the area) with written recommends from employees lining the shelves (mentioned before - I don't think it's insincere either, because they're conversationalists on the stuff). Everyone seems to know where everything is, unlike big box hardware. I can also cap off the afternoon with a middling coffee without leaving the building. Used to go there after every film I watched at the cinema. I'm glad B&N isn't that far, even if I would like to live closer to more bookstores (re: lack of proximity complaint from a year or two back).

There used to be a Borders as an alternative with a balconied second floor, but the place removed all the chares and sent employees on patrols to rout readers and stare down people who would so much as crack one open to sample a chapter. Yeah, I get this is a place where you sell books, but look who's shut down now.

One of my favorite book stores is like 2/3 up to Canada. If it was early enough, I'd usually take an early exit just to visit the place on my way to other business.

Funny that you're so far behind the zeitgeist.

i go to galleries and museums.

didn't you earlier just claim that an instagram feed wasn't evidence of anything? because it's not a 'real site'? now i'm the one supposedly missing the zeitgeist?

This is PUA Dark Magic, it carries great risk, it must be used with great care, or you may summon demons.
Русский военный корабль, иди на хуй!

This is PUA Dark Magic, it carries great risk, it must be used with great care, or you may summon demons.

This is PUA Dark Magic, it carries great risk, it must be used with great care, or you may summon demons.

none of that is what PUAs do and you are being disingenuous in the extreme.

what if i told you … museums and galleries host contemporary shows? it’s not all antiques and staring at 19th century craquelure.

but sure, dilbert understands the zeitgeist. from his parents’ house. in adelaide. and the cultural zeitgeist is … the manosphere. our cultural moment!

At this time I would like to say I have never said anything is a hoax.

Thats all I can think of at this point.
Русский военный корабль, иди на хуй!

Was able to get my Yosemite reservation

You didn't learn that in middle school? You must have grown up in another country

Never had that at Catholic school

Nobody has ever been shot at a Catholic school. Facts.

Could the tech team get on it?
Русский военный корабль, иди на хуй!

If Norton has a detailed report you can forward it to Tazz I suppose. Our PHP is (apparently) out of date by a fractional version, but I don't know if any of the vulnerabilities addressed since then have any bearing on that error.

My own suite is unconcerned, but this site triggered the first handful of web scanners I just ran it through (one of which passed on all but two systems). Though I recall issues previously.

Also fwiw, youtube has in the past triggered MDR22 according to reddit. Grain of salt though, YT has had fishy ads in the past.

e: whatever is tripping mdr22 probably won't get past your norton's baleful eye. on top of that, clear your caches, and restart softwares.