I think remaining vaguely coherent when pushing your 80s is a lucky achievement. More so for someone with a stuttering problem who's had two brain surgeries. I'm no staunch defender of Biden though, that is indeed a clippable clip.

Supreme Court running roughshod over the country and I guess he just has stern words.

Mike Pence seems to have decided that the only way past Donald Trump is through Donald Trump.

Unlike many of Trump’s would-be 2024 challengers, his former vice president is issuing a direct challenge by endorsing against him in critical races in states that were hotly contested in 2020.

Pence’s latest move is an endorsement of Republican Karrin Taylor Robson in the Arizona governor’s race.

“As Arizona Democrats pursue the reckless Biden-Harris agenda, Karrin Taylor Robson is the only candidate for Governor that will keep Arizona’s border secure and streets safe, empower parents and create great schools, and promote conservative values,” Pence said in a statement announcing the endorsement. (Robson has also been endorsed by outgoing Arizona Gov. Doug Ducey, who has drawn Trump’s ire for his refusal to overturn the 2020 election results in the state.)

That move puts Pence in direct opposition to Trump, who is supporting former local TV anchor Kari Lake in the state’s August 2 primary. “Few can take on the Fake News Media like Kari,” Trump said in announcing his endorsement last fall.

Lake has been one of the highest-profile backers of Trump’s false election fraud claims. She has gone as far as to say it is “disqualifying” that Robson does not believe the election was stolen from Trump.

In an interview Sunday with CNN’s Dana Bash, Ducey, who co-chairs the Republican Governors Association, was blunt in his assessment of Lake: “Kari Lake’s misleading voters with no evidence,” he said.

The move by Pence to endorse Robson is rightly understood then not as simply a rejection of a Trump-backed pick, but an attempt to affirm that the 2020 election was, in fact, free and fair. Pence and Trump are scheduled to hold dueling rallies on behalf of their preferred candidates in the state on Friday.

It’s a remarkable turn of events that Pence, more so than any other Republican considering the 2024 race, has emerged as the one willing to stand up to Trump and his election lies. (Florida Gov. Ron DeSantis, for example, isn’t getting involved in contested primaries outside of his state.)

After all, Pence spent four years as essentially Trump’s wingman. At seemingly every bill signing, Pence was standing behind Trump, giving him an “attaboy, boss.” At speech after speech in the White House, Pence was in the background, nodding along to the points Trump made. At one Cabinet meeting in 2017, Pence praised Trump every 12 seconds – for three minutes straight.

Well, January 6 happened. Trump engaged in an extended pressure campaign to try to get Pence to overturn the 2020 election results. And as Cassidy Hutchinson, a former aide to White House chief of staff Mark Meadows, testified before the House select committee investigating January 6, Trump was apparently approving of the chants of “Hang Mike Pence” from the rioters storming the US Capitol that day.

That, you would think, changes someone.

Baby steps in the lapdog recovery program are still steps.

I wonder if my local Trump guy will put up an anti-Pence flag.

On that note, I saw a paused roofing job awhile back with a "fuck joe biden" flag planted squarely on top of it. Just the thing everyone wants above their apartment. Still better than "let's go brandon."

every bit of news to come out of the jan 6 hearings is absolutely scandalous. makes watergate look tame.

and yet more than half of the american people don't even care.

This whole thing is frustrating.

Apparently, the strategy of drowning Americans in shit several times a day has worked. People are exhausted from hearing about Trump, exhausted from work, and exhausted from money issues. For some people who aren't even Trump supporters in the slightest, there's no more energy to spare for these hearings/etc., and low expectations for results.

Republican Kinzinger on Jan 6, 2:27-ish, in an appeal directed to the Trump cult against their Fearless Leader (soft and placating, "no matter your politics"):

Eighth Hearing on Investigation of January 6 Attack on the U.S. Capitol
https://www.c-span.org/video/?521771-1/ … us-capitol

e: sorry I just can't get over how dumb it is that yang thinks we need an another twitter arch-troll in politics. musk in particular, wtf. not even his own kids like him, right? at least trump's pretend to?

The Forward Party platform: be more like China? Get all concerned about employees in the country spending two extra minutes waiting in line for a coffee maker. So disappointing, get out of here.

Secure the vote of the economically disenfranchised by turning a loathed billionaire into your new party's figurehead. o.O

How can we trust the 2016 results if it's all rigged? There should be a recount.

Was reading about the Eastman memos and a few other of the colorful characters from the bad old days. I had evidently forgotten some of those talking points they were trotting out between November-January and it's incredibly alarming to revisit just how close it was to working.

man so much fraud in republican primaries.

More for the #everyaccusationaconfession pile for that party.

so china has withdrawn cooperation on military, climate, among other things, with USA.

apart from the fact that we're on the brink of ww3, if xi wants his third-term and to convey strength and nationality unity, etc etc.

lack of cooperation on climate is arguably even more damning, as if such a goal wasn't difficult enough in 'peace time'.

we're going to let the earth burn to death over 22 million people on an island now?

we're going to let the earth burn to death over 22 million people on an island now?

as i said, the withdrawal of cooperation on climate agreements is arguably much more harmful than letting taiwan fall.

as i said, the withdrawal of cooperation on climate agreements is arguably much more harmful than letting taiwan fall.

i mean theyve been polluting and killing their own environment for decades. they aint doing climate shit at all. its all a ruse.

maybe so, i alluded to the difficulty of it even in peace time. but it's going to be much, much worse if we're entering another era of superpowers facing each other down. we really can't deal with another 20 years of escalation and drawbridges being pulled up. there's a big timer ticking down on human civilization, or the current global order as it is anyway, regardless of these territorial disputes and imaginary lines on maps.

what will be more destabilizing for the world, i wonder: a few sovereignity claims made by small nations or the hundreds of millions who will be forced to mass-migrate after the equatorial regions become uninhabitable?

I don't see it as any worse than the US withdrawing from the paris climate accords under Trump and scuttling the entire EPA. I also do not expect serious escalation between either side apart from political posturing and the (not unprecedented) military exercises around Taiwan.

Xi Jinping already declared a while ago that 'national rejuvenation' should be achieved by 2049, and its mostly implied this includes unification with Taiwan. The narrative hasn't really strayed from the idea that peaceful means will be used to achieve unification with Taiwan and is mostly articulated as (politically) opposing independence.

In some speeches in the 2010s it was stated the issue couldn't be handed over from one generation to the next, but the rejuvenation timeline still allows for the can to be kicked down the road towards new leadership at some point. Either way it doesn't appear like there's appetite for conflict and there's no real politically visible preparation for it.

What does bother me is the US's timing on this. WHY now? We're already in an increasingly tense conflict with Russia. The Russian-Chinese relationship is a very important issue here especially if we're looking at effectiveness of sanctions on a medium term. The russians didn't waste a second to voice disapproval over Pelosi's visit and are no doubt trying to buddy up with Beijing at every opportunity to expand economic & political cooperation against the West. Let's not hand them common ground on a platter...

agreed. the ‘west’ is doing a great job diplomatically of forming a new world order between the quondam ‘BRIC’ countries (i know that term and the supposed power of the bloc has underdelivered):

CPAC sideshows are getting more and more wild each year. 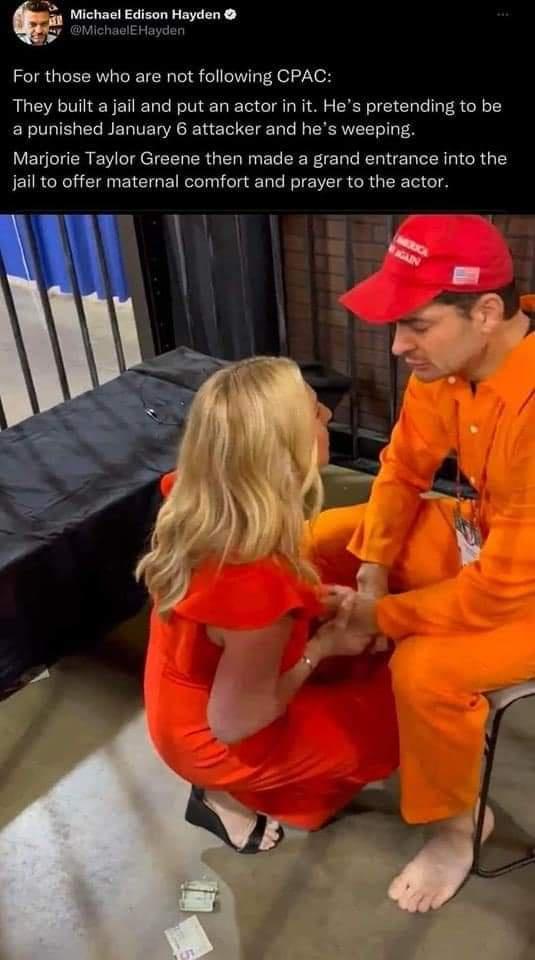 I've also read this actor was one of the insurrectionists who avoided jail by ratting out his friends. I don't know if that's true and don't care to look it up, but hilarious if so.