Seems odd that the PGA would be butthurt that players are playing in another series.
You'd almost think that handcuff contracts mean the whole thing is just a grifting scam.

Does anyone even watch golf? Why?
Русский военный корабль, иди на хуй!

If we had invested in green energy after 9/11, energy prices wouldn't be so bad now due to competition?

Mike Lindell says Walmart, MyPillow's biggest distributor, is 'canceling' him and pulling his pillows from its stores: 'Shame on you, Walmart!'
https://www.businessinsider.com/mike-li … cts-2022-6

Mike Lindell, the CEO of MyPillow, has accused Walmart of "canceling" him by pulling his company's pillows from the retailer's shelves.

In a call with Insider on Thursday night, Lindell described a Zoom meeting in which he said a Walmart representative told him the company would start selling MyPillow products only online and not in stores.

"They dropped MyPillow, and it really hurt my employees because they were our biggest distributor," Lindell said. "They were by far and away number one."

Lindell then called Walmart "absolutely disgusting" while describing his pillows as "one of the top-selling products in the history of Walmart."

During his conversation with Insider, Lindell said he heard MyPillow products would not be sold in Walmart stores about two weeks ago after returning from flying "all over the country" to deal with "the election stuff."

Lindell said he got on a Zoom call with a Walmart representative in which he proposed lowering the price of his pillows. He said the representative didn't get back to him for a week, after which his company was told Walmart was going to "drop MyPillow."

"I tell them what I'm offering them, and I'm saying: 'Why are you doing this? Why are you kicking us out and canceling us?'" Lindell said. "When we were your biggest product, the biggest of all time!"

Walmart's website shows "ratings" for each product it sells. As of press time, the MyPillow Classic Bed Pillow had 3.3 stars, based on 2,084 reviews.

"I said, 'Shame on you, Walmart. You have over 10,000 vendors from China. I make all my pillows in Minnesota," Lindell said. "I was so upset. I shut the computer."

Lindell told Insider that Walmart would "never get to sell MyPillows again." "What they did is inexcusable! It's cancel culture, and you don't get to come back," he added.

A Walmart representative confirmed to Insider that MyPillow products would no longer be carried in stores but would continue to be available online.

Other retailers have similarly distanced themselves from Lindell. In April 2021, Costco pulled MyPillow's products, as did Bed Bath & Beyond, QVC, JCPenney, and Wayfair.

And to think, I was about to cash in my Jaded Monkey NFTs and buy bitcoins.
Русский военный корабль, иди на хуй!

depends where its at, but yeh its pree fooked.

And to think, I was about to cash in my Jaded Monkey NFTs and buy bitcoins.

but yes, it’s either a shake out or a perilous terminal decline.

cos thats how he funds his lifestyle

He is a vegan chef

crypto at its worst resembles a MLM/ponzi scheme. your investment isn’t worth anything unless you can find some fool to buy it off you for more then you put in.

the problem is all the big investment funds/‘whales’ are now capable of crashing any coin or currency. if they get nervous, they tend to follow the same group think and all pull out at once, and it’s a rout. ironically, without the mainstream financial institutions being onboard, crypto looks very shaky.

promoting the latest coins or NFTs to your high-school friends on facebook isn’t going to do shit if the major funds decide they want out. all that’s left is ‘lonely housewife’ style MLM fronting.

Really you have to be insane to think something conjured out of thin air and not backed by anyone or anything is worth putting your money into - unless its a small sum for a very short time, ie minutes or hours, for some transaction or other. Even so its still a bad idea.

I do know two people who claim to have made small fortunes getting in and out at the right time and admit it was largely dumb luck.
Русский военный корабль, иди на хуй!

lots of types of 'value' are conjured out of thin air though and are only appraised at high values because of group consent. NFTs being the latest fad amongst a certain section of career gallerist/artworld worker should give you a pretty strong hint. objets d'art are a demonstrable category of material good which accrue phantasmal amounts of value 'from thin air', or, more precisely, about $60 bucks worth of canvas and paints (the changing economies of scale of bitcoin mining are an interesting comparison).

bitcoin isn't such a simple comparison, agreed, but crypto nerds will keep repeating the mantra until they're blue in the face that the underlying blockchain technology is revolutionary and is here to stay, etc, etc.

for these above people, immediate liquidity or cashing out isn't the point, anyway. they're ideological 'lifers' on the crypto/blockchain wagon. and, as i said, if you put in a modest amount (which you could afford to lose) even a couple years ago, to say nothing of being an early adaptor, then bitcoin is still one of the best 'money grows on trees' investments around. there are people driving lambos now because they took a nerdy interest in home mining in the 2010s, or because they bought 20 BTC in the early days for use on the novel shopping sites of the darkweb, etc.

ironically, again as above, the price of bitcoin only really started doing serious numbers when it was exactly 'backed up by someone', i.e. major investment funds and financial institutions that took an interest. which is the usual left hook/right hook set-up for small amateur traders using their first stocks app on their iphone to come aboard and get assfucked.

Lots of revolutionary technologies turned out to be stupid.

Just the megawatt-hours required to keep it doing nothing ought to be a clue.
Русский военный корабль, иди на хуй!

yeah, no questions there. the energy consumption/efficiencies of blockchain are a no-brainer criticism.

someone with their head to the ground 10 years ago could have made astonishingly good decisions, either mining or buying BTC.

Burning up oil for a useful purpose and burning up the electricity of a medium sized nation to keep your imaginary balance up to date aren't really comparable.
Русский военный корабль, иди на хуй!

bitcoin mining is a high-emission 'extraction' activity, just like ... you know ... those huge fossil-fuels projects that australia is embarking upon.

nothing about the balance is imaginary. people in developing countries have been using bitcoin as a currency. it's does provide a decentralized banking platform. of course, such decentralisation is also blighted with issues of criminality and market fluctuations. but that's by the by.

Most nations can print money and keep track of it without burning up gigawatt hours of energy.

'those huge fossil-fuels projects that australia is embarking upon' are what keep your lights on, power your heating, cook your food etc.
Feel free to do without.
Русский военный корабль, иди на хуй!

err, the standard financial system does burn up gigawatt hours of energy, lol. are all your bank branches, ATMs, cash delivery trucks, bank HQs etc. powered by good vibes and orgone, or something?

i mean you have to be particularly dense to deny that bitcoin isn’t serving that exact same service in limited ways. that’s the whole point. it’s meant to be a parallel banking system. some countries in the developing world have found it very beneficial. as well as people in places like china who want to funnel their wealth out of a repressive system, etc.

blockchain is massively energy inefficient.  it’s enough to say that. you don’t need to claim it’s all useless fantasy stuff. it’s not. there are bitcoin ATMs in my home city lol. you can bank with and spend crypto in many use cases. 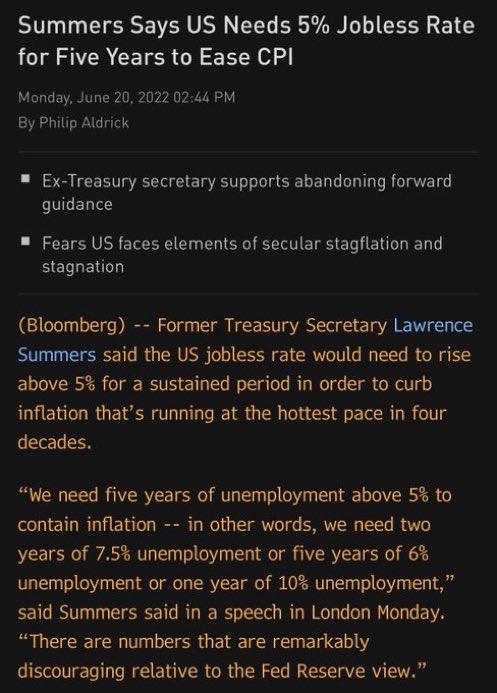 genius. marxists write books for a century on how capitalism requires unemployment to exist, creating an underclass by design … and then one day an arch capitalist comes along and just spells it out.


Having lived through multiple recessions I really don't like this discussion of having to choose between a recession and inflation. Doubly since I am not convinced the inflation is real.

Meanwhile companies churn record profits in price gouging while tearfully telling their expendable employees that they will need to downsize. Others, well, tighten your belts!

that’s the situation in the UK now. one of the major transport unions are striking over it.

Made 30% in three months from shares in my employer. If it could just go up another 30% that'd be great.
Русский военный корабль, иди на хуй!