It was all going great until uziq decided to derail by gloating about covid deaths.
Русский военный корабль, иди на хуй!

Huge problem in the circles that are interested in World War 2. There is actually a term for it: Wehraboo

Hard pill to swallow: The Germans were losing the war by late 1942.

"The Nazis almost won" was probably good for Allied propaganda. Perhaps justifiably amplifying the threat kept the (hard-fought to be certain) war looking more difficult than it was, and kept some people feeling more patriotic before and after as a result. Unintended result perhaps is this cult following of Nazi personalities, and of German tanks and superweapons beyond their practical and strategic usefulness at that stage in development, from people with very limited understanding of the war in detail who watch what amount to be "intro to WW2" doc after rehashed doc.

"Yeah, our puny Shermans stood no chance against the mighty panzers!" pff.

In west, The Wehrmacht was spoke highly of after the war because the U.S. needed a group of good Germans the Germans could identify with after the war to not be resentful. We also needed to rebuild the German military to fight the Soviets. So gassing up the German veterans worked for everyone.

The U.S. also hyped the Germans and Japanese after the war in order to make themselves look betters. Boxers do this. Boxers often talk up their opponents because if they defeat the guy they hyped, it makes them look even better. It also explains away mistakes. 'Made a tactical mistake? No! It was just the tactical genius of the Desert Fox. But we defeated him anyway.'

The Germans the U.S. fought in World War 2 were not the best Germans. We fought the degraded and war exhausted Germans. Also, the Russians probably are always fuck ups so running the score on the Eastern Front doesn't count for much.

It was all going great until uziq decided to derail by gloating about covid deaths.

lol retard. ask the chinese citizens how they feel about your excellent strategy.

are you still enjoying your non-locked down, triply vaccinated life in australia by the way? isn’t it nice to go to the office and take a walk in public? weird how you advertise for a draconian system and then do the complete opposite in your own life, isn’t it? it’s almost like … getting vaccinated and resuming normal life is exactly what you’ve opted for.

I was enjoying my non-locked down unvaccinated life perfectly nicely, its all gone to shit now.

We didn't need lockdowns because we had effective borders - amazing

we've been over this so many times2 now. good for you that you 'didn't need lockdowns' in a place with the population and population density of idaho. the border and lockdown policy evidently didn't work for the majority of your national population, living in dense urban aggregations.

north korea has even admitted to an omicron wave now. still think 'effective borders' work at keeping covid out? let me guess, 'if only' the 'idiots' had done 'closed borders properly', and made themselves more isolated than the DPRK, amirite?!?

We didn't need lockdowns because we had effective borders - amazing

they had insane amount of bad luck. even one outbreak was caused by people leaving dilbs city the dogs.

*measures that requires everyone to not be stupid*
*someone predictably does stupid*
"But our impeccable measures could have worked had everyone not been stupid! I will post about this for the next decade!"
essential services: *also exists*

yeah, that's not bad luck. that's the reality of trying to keep an extremely transmissible variant out of a modern urban population centre.

Russian President Vladimir Putin likely intends to annex occupied southern and eastern Ukraine directly into the Russian Federation in the coming months. He will likely then state, directly or obliquely, that Russian doctrine permitting the use of nuclear weapons to defend Russian territory applies to those newly annexed territories. Such actions would threaten Ukraine and its partners with nuclear attack if Ukrainian counteroffensives to liberate Russian-occupied territory continue. Putin may believe that the threat or use of nuclear weapons would restore Russian deterrence after his disastrous invasion shattered Russia's conventional deterrent capabilities.

(...) The political and ethical consequences of a longstanding Russian occupation of southeastern Ukraine would be devastating to the long-term viability of the Ukrainian state.

I hadn't fully considered this possibility, though it's highly likely in the current situation. The timetable of annexation and the following nuclear deterrent argument is hard to guess. The russians may attempt another offensive before this happens.

I don't think Putin is at all satisfied with the current claimed territory. At the very least he would want to claim all of donetsk & luhansk including the land bridge to Crimea. As his intent seems to be to cripple the Ukrainian state, it's probably also a thorn in his eye that the port of Odessa remains in Ukrainian hands. Making the entire country landlocked would've made things much easier for Russia, though it's conceivable there will be a long-standing blockade of sorts to disrupt economic output anyway.

Unlike ISW I don't think the Kremlin is unaware of the state of the armed forces at the moment. They may still be weighing several options or, as stated, be preparing for a second offensive.

you hadn't considered that putin wants to keep the donbas and a land-bridge to crimea? really? that's been fairly obviously the smash-and-grab-type aim since they failed at their main aims of a blitzkrieg regime change.

using their nukes is always the last bargaining chip but it seems pretty foreseeable to me, too, that this conflict is going to expand and find its fullest shape before the nuclear brinkmanship reaches its logical conclusion.

finland (and sweden) joining NATO will probably lead putin to rely on a credible threat of nuclear strike sooner rather than later. they'll also assert pressure on the situation and reinforce his claims (at home) that any counter-offensive in ukraine is now an 'existential' threat to the russian people, thus justifying tactical nuclear strikes.

I'm talking about the annexation of the occupied territories followed by an immediate threat of nuclear deterrent. Your reading comprehension is seriously failing you if you've read any of my posts and conclude that I didn't expect an occupation of the east. Christ my very first post months ago already stated that.

Russian President Vladimir Putin likely intends to annex occupied southern and eastern Ukraine directly into the Russian Federation in the coming months. He will likely then state, directly or obliquely, that Russian doctrine permitting the use of nuclear weapons to defend Russian territory applies to those newly annexed territories. Such actions would threaten Ukraine and its partners with nuclear attack if Ukrainian counteroffensives to liberate Russian-occupied territory continue. Putin may believe that the threat or use of nuclear weapons would restore Russian deterrence after his disastrous invasion shattered Russia's conventional deterrent capabilities.

Is there really anyone who didn't know this was going to happen?
Русский военный корабль, иди на хуй!

finland (and sweden) joining NATO will probably lead putin to rely on a credible threat of nuclear strike sooner rather than later. they'll also assert pressure on the situation and reinforce his claims (at home) that any counter-offensive in ukraine is now an 'existential' threat to the russian people, thus justifying tactical nuclear strikes.

People are starting to say Turkey could veto their entry to NATO. That'll be a fun shit-storm.

Turkey should never have been admitted, although they have given Ukraine a lot of direct and indirect support.
Русский военный корабль, иди на хуй!

turkey was a useful ally for the US in the middle east. what are you talking about?

Freudian slip there - what does the middle east have to do with NATO and why is being "a useful ally for the US" relevant to NATO either?
Русский военный корабль, иди на хуй!

turkey has been very beneficial to NATO until well... erdogan. the coup shouldn't have failed

On May 11, the Russian command reportedly sent about 550 troops of the 74th Motorized Rifle Brigade of the 41st Combined Arms Army to cross the Donets River at Bilohorivka, in the eastern Luhansk region, in a bid to encircle Ukrainian forces near Rubizhne.

Satellite images reveal that Ukrainian artillery destroyed several Russian pontoon bridges and laid waste to a tight concentration of Russian troops and equipment around the river.

The Institute for the Study of War, citing analyses based on the publicly available imagery, indicated that there could have been as many as 485 Russian soldiers killed or wounded and more than 80 pieces of equipment destroyed. 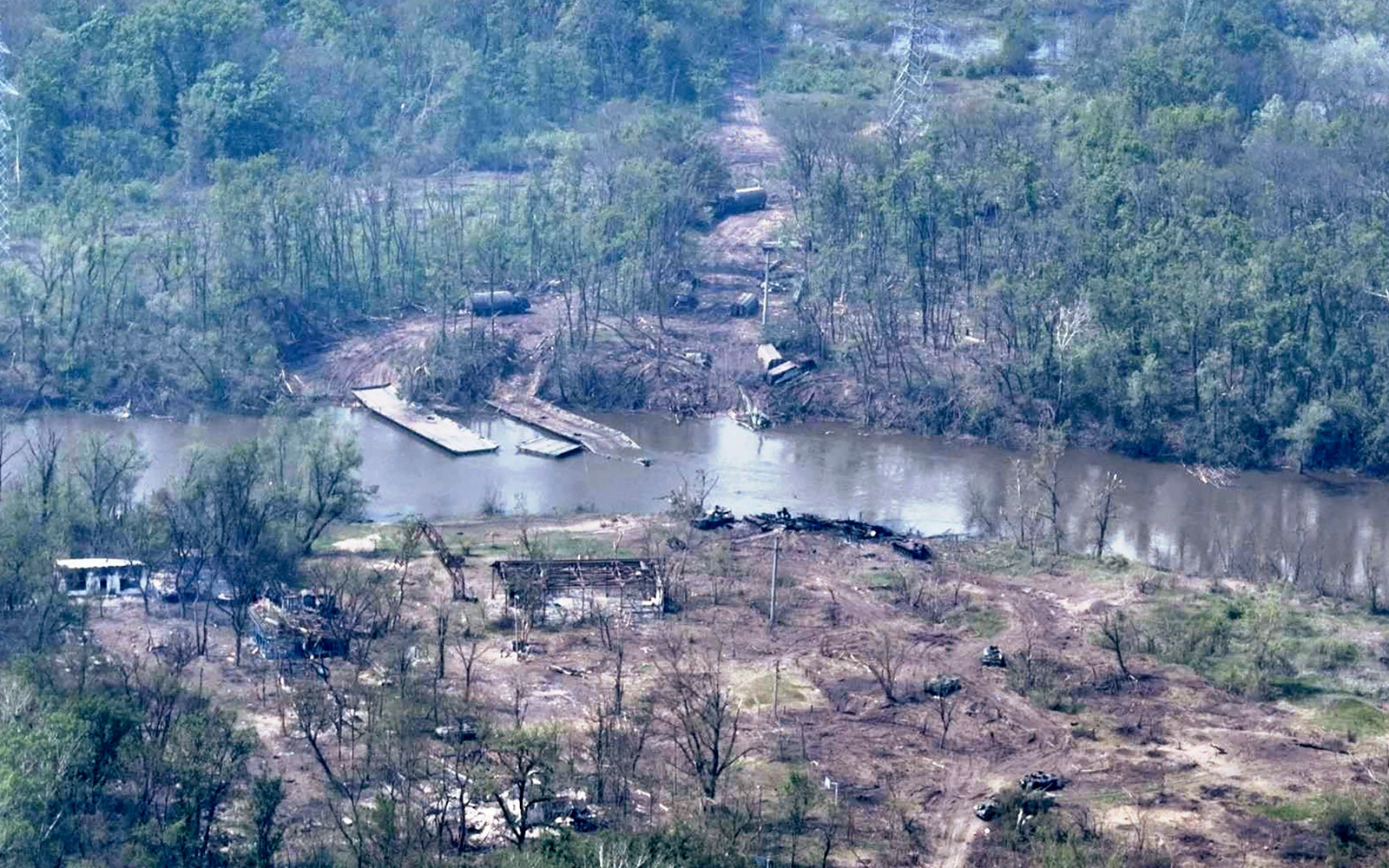 i mean let's face it, at this point they are being continually fed western intelligence and are using american howitzers, etc. the russians are understandably getting blown out of the water, fighting as they are against a very well-prepped defensive force.

I was told the way that went down is that a second force was sent in under grumbling protest and it was hit too.

At this point Putin is looking fairly stupid, saying its OK for Sweden and Finland to join NATO as long as no major weapons systems are sited there.

He could have said the same thing for Ukraine and everyone would have been happy.
Русский военный корабль, иди на хуй!

Finland and Sweden joining NATO is a big deal militarily. Swings the balance of power in that area totally against Russia.

it gives their nuclear-armed allies full access to the baltic sea ... as well as making it a large staging ground for any conventional forces. that's not nothing, especially in the 'great patriotic war'-obsessed minds of pro-putin russians ... naval supremacy in the baltic sea has historically kind of been a big deal.

if russia's strategy since the cold war has been to keep a 'buffer' across most of europe, they've done a very good job in all of about 3 months of removing that buffer entirely. now their entire western border is going to be lined with american materiel and very large standing armies.