Maybe if mac did the yoyo intimidation routine from The Substitute or whatever "get tough on teaching" film that was, he could finally earn the respect of his special ed kids and they could all come to a mutual understanding.

The sanitizing edits are sometimes worse than the buried content, though. "Grateful to be born American" seems a little sour when there are countries with a much better social safety net.

Yes, yes I know how to @username them, but I also know there's a difference between @username at the beginning of your tweet and @username in the middle of your tweet. I think sometimes people also use [email protected] but I don't know why?

I had a question to ask my local transit people and twitter seems like it may be the fastest (if there's any answer at all). I also technically do have a twitter account, it just has 0 followers because I use it to ask questions or send in comments roughly twice per decade.

Does the [email protected] break the @? I use ./command sometimes to tell people how to do a /command. Maybe they're @ing without wanting to actually @.

My Fitbit used to last for 7 days so I'd charge it every Sunday. It's now Thursday night and I set an extra alarm cause I'm not sure if it'll make it through to wake me up. No idea why it drains so much now. It used to sync whenever I had Bluetooth active even if I wasn't in the app, but I only have that for about 30 minutes a day now while commuting (compared to 2 hours before). I wonder if it has something to do with other Bluetooth signals flying about in the office, if it's not from some bloated update to the software?

Batteries don't continue to hold their same charge over time. And I'd have to imagine a battery of that size has a maximum that diminishes faster than laptop or car batteries.

Or they could have taken the Apple (and frankly everyone else) route and installed software that causes it to drain faster so you need to keep buying new ones to replace them.

Gave a kid a dollar to get a bottle of water. I told him not to worry about paying me back. He looked like he was about to have a panic anger attack. Caused a scene. What a day.

I know stuff degrades, but this was awful sudden because even a month or two ago I still easily got a full 7 days out of it.

You left updates on you fool.

Updates are the bane of my android. Occasionally one will come along that resets some of my configurations, and then bam I get a large bundle of updates while not on wi-fi. Data destroyer.

That looks pretty close to a tabby I had.

I am really sorry about all of this writing the last few days. But this situation is a nightmare. At least I ain't getting swept off by a tornado. 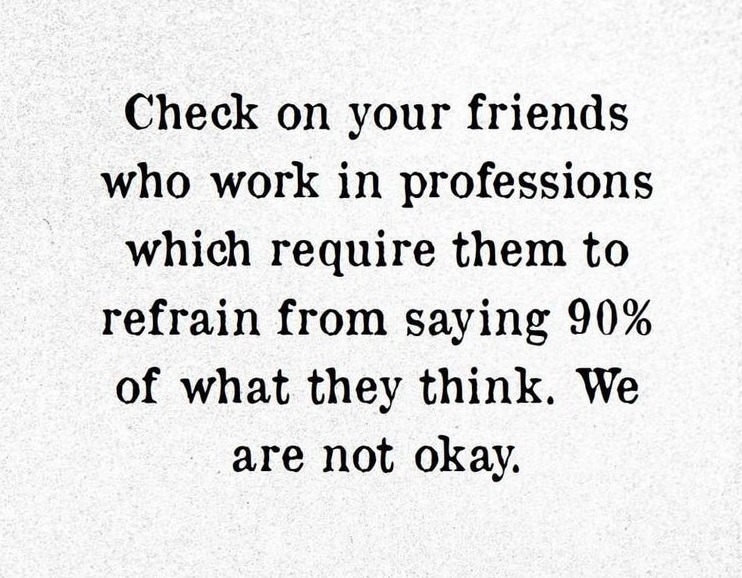 they're called live photos and are pretty cool. you can export any of those as a .gif and it sometimes catches some really neat results.

you can edit the photo and adjust which particular frame is the 'snapshot' photo, if you're unhappy with the results of the initially taken photo. sometimes that millisecond before or after captures a better picture.

Caramel is a stupid candy but it was free so I ate it anyway. Turns out it has a piece of plastic in it and I now have a chipped tooth.

I saw a couple people from an organization I belonged to in college unfriended me at some point in the last 8-9 years. However, I still have like 15-20 mutual friends, so it doesn't seem like they were paring down their friend lists. I wasn't super close to these people, but adding people was a thing back then, so I'm not upset. But I don't know when they did it and I'm very curious now what action I would have taken in the interval that made them pull the trigger since my FB has been quite bland post-college.

Try friending them and see what they do. Don't be a coward.

This sort of thing is a good FWP.

I had someone on Steam ages back, after contacting me out of nowhere and asking how we knew each other, then unfriend me. Weird, but OK. Seems like a bit of a rude thing to do. If you don't remember someone, just remove them if you're cleaning house. You can always add them later.

I wouldn't have even noticed without the, er, notice.

Awkwardly, we were still playing on the same server and they got super defensive about it when the topic somehow came up. I was "salty," apparently? Well yeah, now I am. Get in touch with me after ages of no messenger convo just to say you're unfriending, then morph it into a server drama? Can we just get back to the game?

I just move people who I don't remember and have been offline for like a year into a folder, then empty its contents the next time it occurs to me. Not to be mean or anything, but if a user vanishes or becomes estranged for too long, that's just another opening for phishermen to use hijacked accounts to harass mine.

Helps to make annotations for users, or keep a book of internet contacts. "Who is this guy? Oh yeah, we were playing Company of Heroes that one time." No need for that very awkward "uh, who are you again?" stuff that people do out of nowhere, although I can probably count on one hand the number of times it's happened to me.

Back when I had fb I would keep my friends to sub-100. That dude I met at a party once and we hit it off but never spoke again? It's been 5 years and we've both left college, I don't need to see that you got a new car.

Nearly that but I've been out of touch with high school friends since I left high school.

Across a bunch of different services: family, "regulars" friends (internet and "RL," one group chat has been open for several years and has both), old friends, college friends, friends of friends, family of friends. For Steam I just drag new contacts into a folder with the title of the game one of us added the other on. Business is mostly all email address book. I don't like to combine work with the ease of access that is social media if I can possibly help it.

FWP keeping up with the level of formality individual business contacts prefer being addressed in an email. It's nice when people reply with old content of theirs intact so I can just use that as the set example.

This is the article that really annoyed me. Apparently Google News pushed it to others too.