I don't have any stake in the German election. Interesting results so far?

prepare to see france manoeuvre to become the eminent power in europe now that merkel is stepping down.

They can prepare all they want but that's very unlikely at this point.

that was rather entirely my point. huge amounts of money were spaffed up the wall thanks to the eton-oxford-PPE lot treating it as a giant exercise in croneyism and self-enrichment. we're raising taxes as a result when the amounts of waste, for which of course there's been zero accountability, have been astronomical.

seeing as bojo coaxed all the 'red wall' voters from their vestigial labour-voting tendencies with promises to 'level up' the neglected post-industrial north, it's interesting that, between covid and brexit, those people are being hammered more than ever. duped by the conservatives essentially cribbing corbynism's green new deal and major public investment points; and we're stuck with him until 2024.

There could actually be a revolution.
#FreeBritney

is that before or after china attacks us from space using a mass satellite blackout?

Maybe before, I think, it would certainly happen after.

Actually the average Brit is probably too lazy and unhealthy to mount a revolution.
#FreeBritney 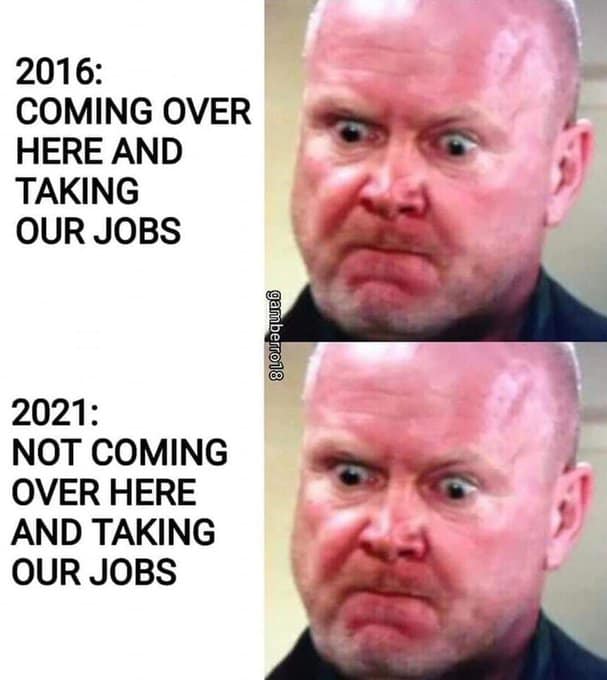 the gammon brexiteers and small-to-medium-sized business owners who shot themselves in the foot over brexit deserve all the mockery they can get.

but actually, the shortage in truck drivers is due to several large-scale, systemic issues that go way beyond brexit. it's slightly too neat and convenient to blame it on 'lol the brits wanted to leave the single market and free movement of labour, and this is the result'.

for one thing, there is a major shortage of truck drivers in europe itself at the moment. europe has a much better connected logistics network, for obvious reasons, and the career path for truck drivers there is actually better appointed. yes, there's the obvious income gradient difference between romania and the UK, etc, which attracts their driver to our beautiful little green isle, but in the main, belgian and german and polish truck drivers aren't lining up to work in the UK. apparently they're not going to work in europe, either.

truck driving has been one of those industries whose profit margins have been whittled away by the cost-cutting efforts of the giant multinationals. UK haulage companies cannot offer a good or competitive rate. drivers can work, via agencies, for giant international firms and make £50-60k. that's great for the limited number who get those jobs, but it makes the jobs driving regular haulage (or petrol) for the UK's normal network look a whole lot less appealing.

apparently lots of truck drivers were furloughed or temporarily put-off during the pandemic and just decided to ... not go back. life on their arse seemed better than the job itself. that says a lot about the working conditions and/or pay, methinks. and good for them. one small upshot of this shite pandemic has been workers realizing that they're sick to death of wasting their lives on shitty jobs with shitty reward.

I said it elsewhere but it is cucked jealousy to be angry at people who drop out of the job market to be professional losers. Would I like to stay home all day, smoke pot, and play videogames? Hell yeah. I unfortunately do not have the psychic energy to do such a thing. I have absolutely no ill will towards anyone living that dream though. If the government wants to give these professional losers free Netflix I say go for it. Worker shortages are fake news. More people should drop out.

one small upshot of this shite pandemic has been workers realizing that they're sick to death of wasting their lives on shitty jobs with shitty reward.

People are always surprised to discover their company wouldn't blink if they dropped dead in the middle of the office or shop floor.
Its an unpleasant realisation, also the possibility that people could be dead in two weeks does focus people's minds.

The industrial and farming mechanisation dividends still haven't worked through the system either, a lot of people probably shouldn't work.
#FreeBritney

Old people need to retire. This pandemic should have been a wakeup call to enter retirement.

Retire with what exactly? How many old people are sitting on a giant nest egg? Choose between: rent, food, medicine. Same boat as younger people, except for the creakier joints.

sir david amess stabbed to death during one of his regular parliamentary drop-in sessions in his home constituency.

that's the 2nd elected member of parliament to be murdered in such a way in 5 years. seriously not a good look. really, really bad.

jo cox was shot and stabbed by a right-wing loon shouting things about brexit. i wonder who wanted to murder a pretty arch euro-skeptic tory like amess. if it's someone whose even more right-wing than he was, that would be grim news indeed.

You are 0-1 with calling the motives of European terrorist this week. Might want to hold off on blaming the right today.

the first one was a joke. i don’t have any knowledge of norwegian (or danish) domestic politics or the reasons for why a guy would go postal with a longbow. it’s basically a meme in europe that norwegians all listen to black metal. it’s one big fantasy LARPer zone.

domestic terrorism incidents in the U.K. are extremely rare. up until very recently, with brexit, we didn’t have the equivalent of a timothy mcveigh faction. terror attacks have mostly been islamist. but it’s not been part of the MO of islamic terrorists to target actual political figures. hard to say. there's certainly not much in particular about his own political leanings or activities that would incense a jihadi (other than the fact he was critical of the regime in iran, which, errr, doesn't typically inspire terrorist attacks). it would seem very random. but these things are all too depressingly possible.

regardless, it’s a deep national shame and regret that 2 MPs have now been murdered. this is not the britain i know. we’re supposed to be the sober and rational ones. a reputation which has come to seem more and more ludicrous over the last few years.

An "us vs. them" state of mind is a useful tool for politicians (esp. authoritarian/-leaning) to exploit, but is a mental poison much talked about. Without it, I don't think otherwise ordinary people would have been recently stalking the halls, zip ties in hand, looking for politicians to abduct.

I see Trumpism and the Brexit stuff packed into the same nutshell a lot.

The two electoral shocks of 2016 – the United Kingdom’s vote to leave the European Union (‘Brexit’) and Donald Trump’s election as President of the United States – left observers aghast or elated. For those who found themselves in the former category, the outcome of the Brexit referendum represented a crisis that dwarfed any other challenge the European Union had faced in recent years, while Trump’s victory was seen as a “profound shock to the west, one that calls into question the future of its democratic model and the liberal international order.”1 For the latter group, Brexit was an enormous victory over an “arrogant, out-of-touch political class.”2 Similar feelings could be found across the Atlantic, as Fox News claimed that the result of the 2016 presidential election was a “national rejection of both the traditional media and the Hollywood elite.”3 The one shared sentiment among the majority of observers was surprise. Before polls closed on 23 June 2016, even Nigel Farage, former leader of the United Kingdom Independence Party and a key figure in the campaign to vote Leave, said he thought Remain would win the EU Referendum. 4 Only a small minority had the prescience to know that the conditions for both outcomes had been building for some time. Jonathan Haslam was among the few who thought that Trump’s election was “likely” due to “burgeoning blue-collar resentment and dissentient opinion among longstanding Democrats.”5

i wonder who wanted to murder a pretty arch euro-skeptic tory like amess. if it's someone whose even more right-wing than he was, that would be grim news indeed.

The killing of Conservative MP Sir David Amess is being treated as a terrorist incident by police.

Sir David was stabbed multiple times at his constituency surgery in Leigh-on-Sea in Essex on Friday.

The Metropolitan Police said there was a potential link to Islamist extremism.

Government sources have told the BBC he is a British national who, from initial inquiries, appears to be of Somali heritage.

For someone who touts himself as an academic you're pretty good at making wild assumptions based on nothing.
#FreeBritney

Most terror attacks in the UK have been Irish christians.
#FreeBritney

You guys need to have an open mind about the wrongs committed against the Irish by your community.

Most terror attacks in the UK have been Irish christians.

i'm talking post-9/11. the good friday agreement might be in jeopardy because of brexit but i don't think we need to involve the IRA in this discussion. i have mentioned that at length in other macbeth-sponsored discussions of 'islam is the only violent religion' and yadda yadda.

and yes, i don't see any sense or motive in murdering sir david amess as part of islamist terrorism. it seems almost random to me – as i said.

'0-2' haha. i make one flippant remark about a neo-folk black metal-style murder spree and you twit about me being a 'fake academic'.

tell me again  how leprosy, a contact-based disease, is dangerous within 1.5 metres!