Well the last one I played was Microsoft Golf 2.0 where I had a super flukey eagle as a child. I did manage to get a hole-in-one on a par 3 tonight, so that was nice.

Look at this other shit I did. It didn't even land on the green. There's no way it should've gone in.

Turned on the Xbox today to play some RDR2.

First I had to update. This required me signing into my XBOX live account.

After update I had to re-sign in to Xbox live account.

Sorry, we can't sign you in right now (even though you were able to sign in 10 mins ago). Try again later. Alternatively, go to my Xbox assist for more.

Go back to RDR2 to commence download/update. Haha you stupid fuck, we've been downloading the update the whole time! You just need to wait an hour!?

Took me two hours but im in. I bought PGA2K21 and now I'm delaying playing that bc it will take two hours to set up

Mine was a 6 GB download and installed in 5 minutes on Friday. Freekend expires around midnight though, so no BF2s 2021 Open for me, even with my sick-ass chips.

Can't even connect online to anything. Keep getting a temporary network outage message. Stupid

So frustrating. Haven't been able to play online for 4 hours. I'm reseting the console right now for the 4th time.

Just wait until it forces you to update in order to install a weather app on the Xbox taskbar.

That used to be more or less true. 0 issues with NES/SNES/Genesis unless the rental cartridge was a little worn out. Now if I hook up a new Playstation whatever I've gotta go find my user credentials, log on, update the system, install the game, download its updates and whatever DLC.

It's basically a very close experience to buying a pre-built computer, only you don't have to mess with Windows or the knowledge that work stuff is on there and may need doing first.

PGA 2K21 is pretty fun. I only managed to play a few hours but already made it to the tour.

red dead 2 is genuinely one of the better single-player experiences i've had in recent memory. was very good on PC with minimum issues, which isn't at all usual for rockstar ports, in my opinion. super polished game, decent enough storyline, very immersive world.

it's a slow start but the game picks up and becomes very pacy. unlike, say, skyrim, which has a slow start and is just an insufferable fucking bore.

Bethesda games in general don't lend themselves to the storyline clicking along.

Remember how everyone was excited for Patrick Steward VAing Oblivion, only to see his character killed off during the tutorial?

PGA is 67% off in the Steam sale and under $20. I don't plan to become a mega golf nerd, but that might be suitable to me to finish it out, honestly.

I bought it on xbone for $30 I think. Its got a lot of replay value. One question though- are you able to upgrade your characters attributes/abilities? Or is it only the nominal gains/deductions you get from swapping equipment?

I haven't seen anything for attributes. Largely I think you can only have the slight modifications with the different clubs, though I don't know if some of the non-purchasable ones unlocked by level/contract provide better bonuses.

So Steam, dealer of many racy games, has been a little concerned about how family friendly it appears. Once, an internet friend got a slap on the wrist for posting questionable screenshots of Steam games and had their images all taken down. The usual hypocrisy, right? But it gets richer. 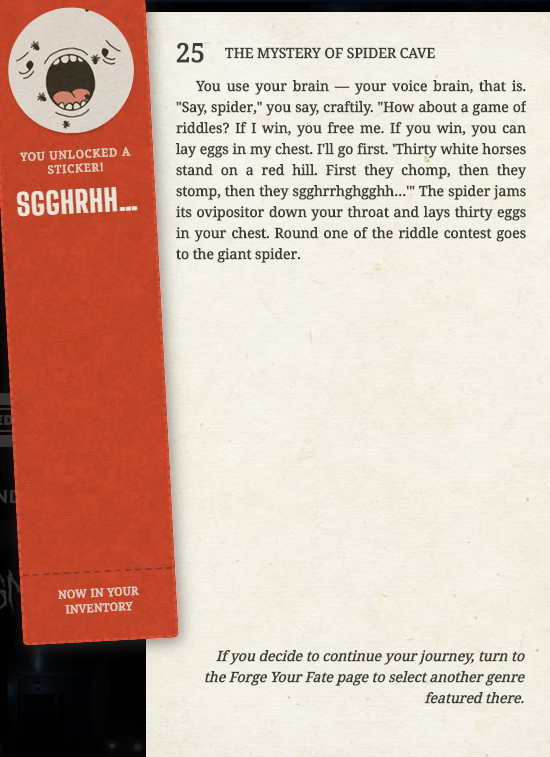 A+, kid-friendly stuff, Valve. Saved in case I ever get in trouble for like three pixels of areola I didn't notice before uploading a Grand Theft Auto 6 screenshot or whatever.

I still have 7 or 8 games installed from two sales ago that I haven't even tried yet. It's such a hassle getting over the initial learning curve.

I have Red Dead Redemption 2 still installed with 4.3 hours. I am going to uninstall that. I have a friend who likes Spyro so she will probably play that she when comes over later.

I did also pump 241 hours into Hearts of Iron 4 as well as bought all DLC. I semi-enjoy that game. It's already passed Stellaris in hours play.

I just played RDR2 again yesterday for the first time since March according to my save data. Kinda forgot what I was doing in terms of minor "objectives" for compendium completion stuff, though. Did a very easy mission and just enjoyed walking around the city. You really need to power through a lot of the tutorial stuff in a weekend, say, and get the game fully opened up.

Kingdom Come is another game that I quite enjoy but can be frustrating at the start and definitely has a learning curve for combat.

I have so many games I haven't played at all or for longer than an hour. Continuing to buy them without thought would be ludicrous. If Steam allowed second-hand sales of licenses I could probably free up a good amount even if they skimmed from the top. I can't even begin to list the ones I don't remember owning in terms of "7 or 8." In some ways, I consider them tax for eventually finding something that I'll sit down and play a ton of, like HoI or 7 Days to Die.

The sale spider is also fully intelligent and capable of speech. If you choose the other option, it's more or less the same result. So to complete the Steam event your protagonist literally has to get raped by a spider. As someone who has beaten shoes against the porch step to knock out forest spiders, I would lodge a complaint if I weren't concerned about having my account marked as a troublemaker's.

Someone else's (they have L4D in their wishlist still, wtf?) screenshot of the other option: 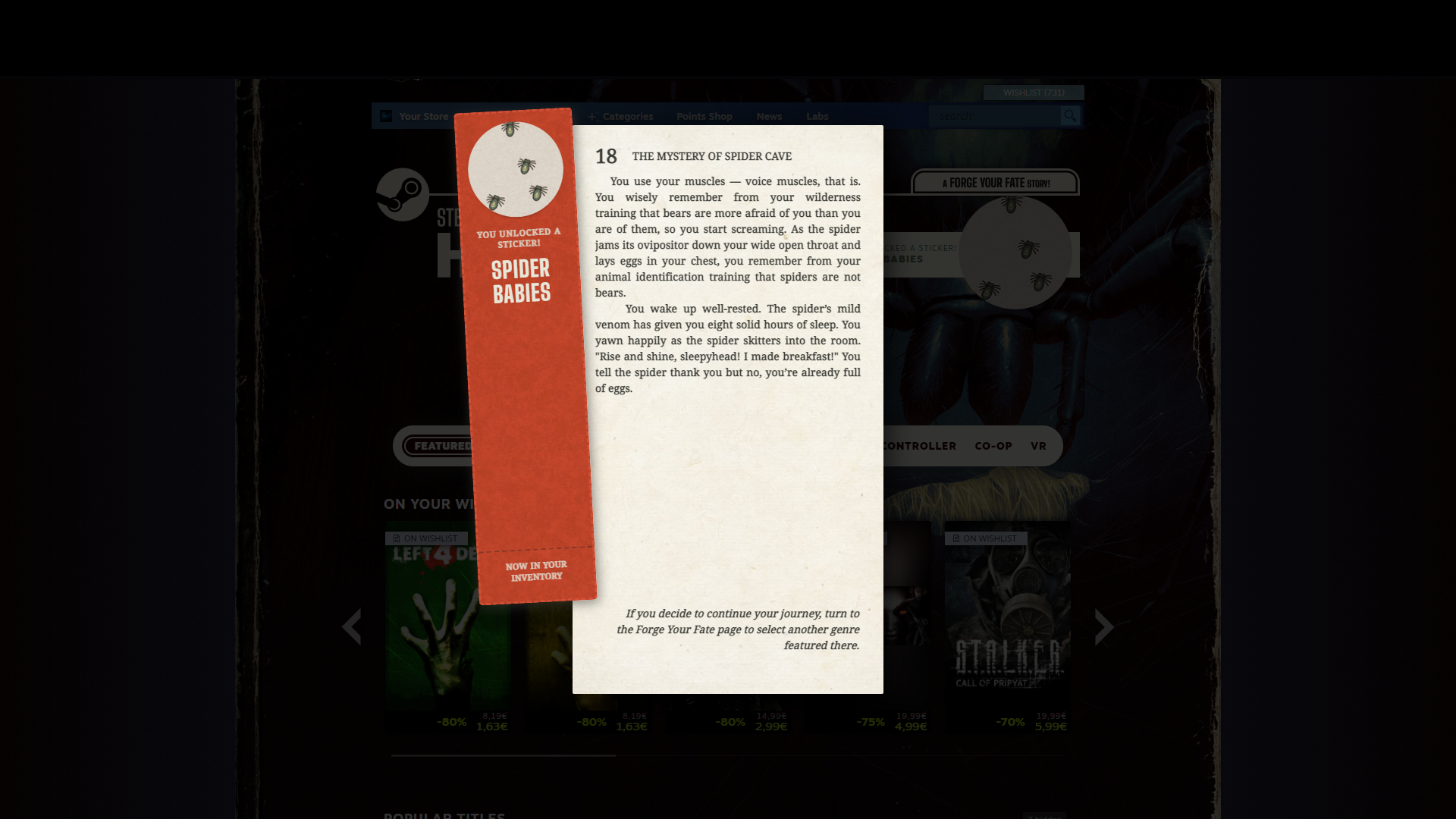 If you or someone you love has been raped by a spider, blah blah blah.

Here's to it being coh3

Not interested unless they scale up the game. I want to send thousands of NPCs to their deaths not small amounts.