Battlefield™ 2042 is a first-person shooter that marks the return to the iconic all-out warfare of the franchise. In a near-future world transformed by disorder, adapt and overcome dynamically-changing battlegrounds with the help of your squad and a cutting-edge arsenal. 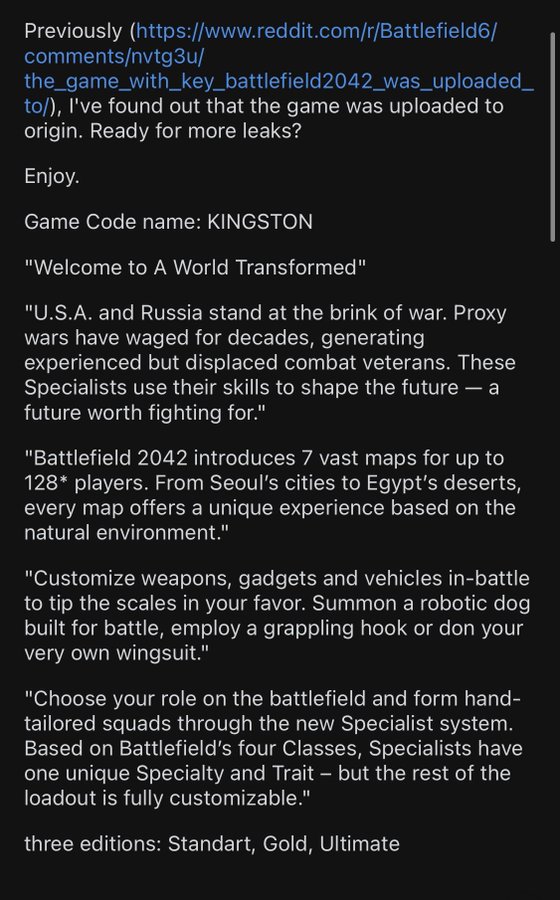 Honestly haven't found a mainline battlefield game that I've enjoyed since BF2 and the trailer here doesn't really instill much confidence in me. Looks like they're still trying to be a little too flashy and modern for my tastes. Although, if the trailer is to be believed, the map sizes look like they're gonna be huge.

The trailer shows a guy popping out of his jet, shooting down another jet, then landing in the cockpit. Also the scene of ramming a jihad quad into a helicopter.

The people who made the trailer at least have some familiarity with BF memes.

Remember when servers had rank ceilings? Kicked if you were a butter bar or above lol

Trailer looks awful. 20 years in the future and we won't have drone fighter jets but we will have checks notes weather machines? Why are soldiers running around among each other and out in the open? I know TaCtICaL sHoOtErS are not real war but you would learn enough to know that the 1:20 isn't practical. And World War 3 with advanced computer systems wouldn't last very long in the real world once China cuts off the global rare Earth material and the government makes it illegal to own more than one cellphone.

Anyway, I was already skeptical of the whole thing before I even started the video. I was not won over.

You gotta keep the people though. Reading comments that made a prototype 2142 titan map in bf4, maybe they're on their way to making 2142 2
I get what they were going for in the trailer with doing stuff that happens in battlefield but most of it looked like a bad B movie.

Whatever complaints people have about the realism of the Battlefield series should have been put to bed as long ago as BF1942. More recently, BF1 certainly wasn't a realistic depiction of WW1. A less exciting version of BF2042 would have all the soldiers sheltering in place back at base because of super-COVID-39.

The trailer was kind of a mess, but the memes hit the right buttons. Still, I don't see myself getting back into Battlefield. Even if it was good, I just don't want to be sucked into another super-competitive PVP. I don't have the time.