"On a plane from TX DC flight attendants are struggling to control a plane full of Trump supporters as they display a pro-Trump projection and harass others passengers bound for DC."
https://old.reddit.com/r/PublicFreakout … dants_are/


"Woman claims she was hit by BLM & that MPD protected the aggressor. Guess who started it?"
https://old.reddit.com/r/PublicFreakout … _that_mpd/

But I thought it was the police who were "fascist street thugs and had a huge overlap with outright white supremacists"
It seems they're not after all.

This doesn't mean the police aren't being fascist street thugs with a huge overlap with outright white supremacists. They share same locations in the venn diagram with proud boys after all.

But I thought it was the police who were "fascist street thugs and had a huge overlap with outright white supremacists"
It seems they're not after all.

This doesn't mean the police aren't being fascist street thugs with a huge overlap with outright white supremacists. They share same locations in the venn diagram with proud boys after all.

precisely, the whole novelty of the above situation is that even the proud boys and police are now in-fighting and fractious.

these are the same two groups who were handing out water and supplies to one another during, for e.g., the kenosha shooting incident.

rockmyworldrocky
This woman was walking home.
She lives just two blocks away from LA City Hall where a “Stop the Steal” MAGA Rally was taking place.
As she walked through the crowd of unmasked trump supporters, they began to yell, asking her if she had voted for Trump. She said no, flipped them off and kept walking and talking on the phone.
A mob of at least 20 Trump supporters circled her and all began screaming in her face and pushing her between each other. One woman reached over and tore off her wig while calling her a “ N*gger Bitch “
Men holding flag poles began beating her alongside others who were punching her.
At one point a trump supporter grabbed her from behind, restricting her ability to defend herself , as she continued to get maced right in the eyes.
The police line was right behind me in this photo. Not one officer stepped in. It took two bystanders and myself dragging her out and running over to the police line for safety.
No arrests were made. If you recognize anyone in these photos please dm me.
20h 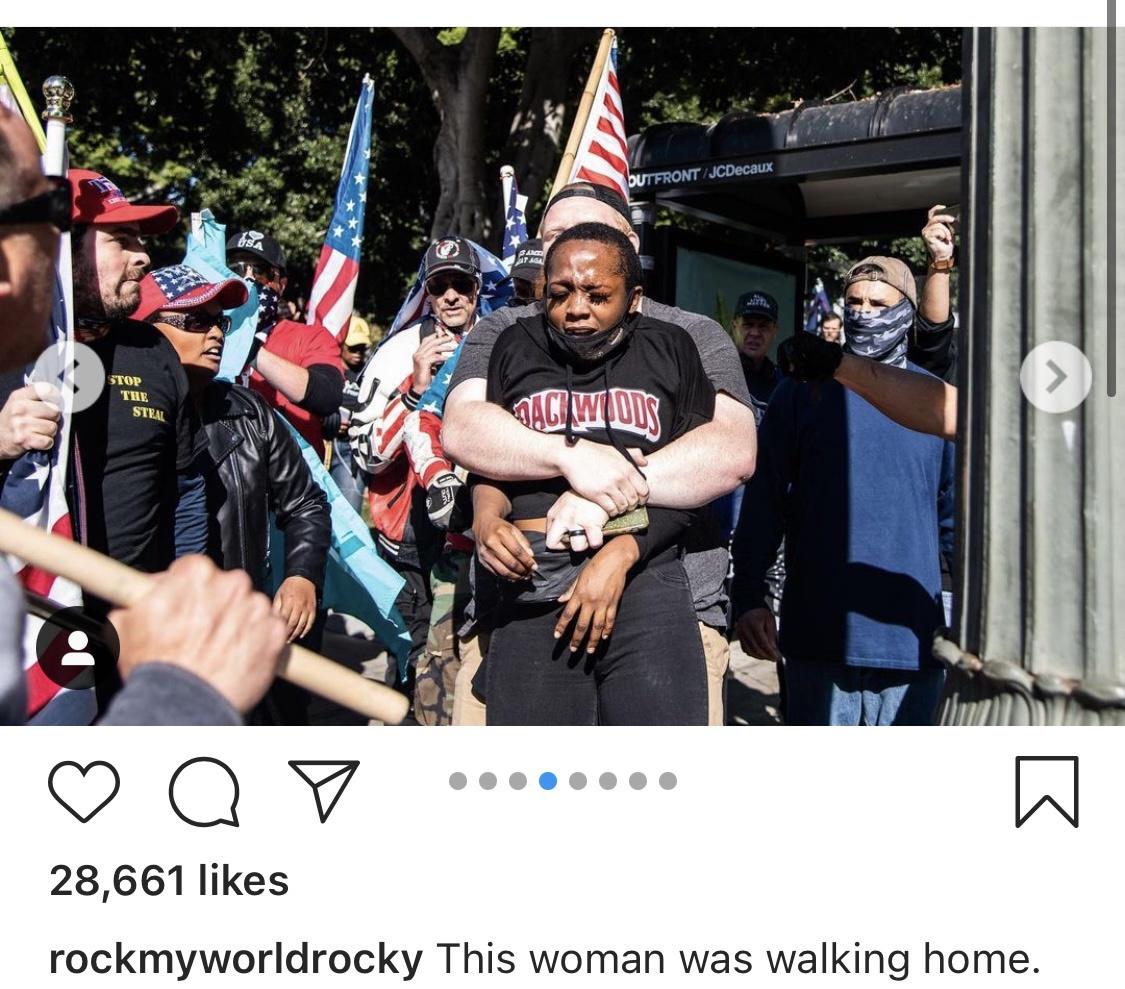 California doesn't seem like a state to take a hate crime lightly.

Remember Trumpist hate crimes are fake news. They're respectable members of society, one and all. Not like hateful antifa or those communist blm.

idk why she went anywhere near those people.

Remember Trumpist hate crimes are fake news. They're respectable members of society, one and all. Not like hateful antifa or those communist blm.

"They were supposed to shoot BLM, not us!"

i can't even imagine the frustration of the parents. respectable, high-achieving members of society, knowing that their children are going to be fingered and accused of crimes, no matter how good a job they do as parents or how respectable they become, by gobshite basic cali bitches.

The University of Kentucky men’s basketball team, including the coaches, kneeled during the National Anthem before Saturday’s game at Florida, and a Kentucky sheriff is not happy about it. In a video posted to his Facebook page Sunday, Sheriff John Root, along with Jamie Mosley, who runs the Laurel County Correctional Center, burned their UK shirts in protest.

In the video, which appears to have been deleted, Root said the team’s actions made him feel “kind of disgusted and outraged,” and that the Wildcats had “disrespected the American flag and our national anthem”:

Very poor judgement on the side of the police. They should be sent to fight QAnon without helmets as punishment.

the contrast is amazing, really, isn't it?

american right-wing media and commentators have been having conniptions all year because a few black athletes take a knee.

then the right-wing storm and desecrate the Capitol and suddenly they're full of excuses for them.

The gaslight potential was huge with spinning the kneel. Trump and various right-wing medias took yuge advantage of it. Excellent smoke screen.

idk why she went anywhere near those people.

Probably not the best idea to flip off an angry mob or whatever, though this 100% does not justify their actions.

A Huawei patent has been brought to light for a system that identifies people who appear to be of Uighur origin among images of pedestrians.

The filing is one of several of its kind involving leading Chinese technology companies, discovered by a US research company and shared with BBC News.

Huawei had previously said none of its technologies was designed to identify ethnic groups.

It now plans to alter the patent.

The state’s own probe found “an egregious abuse of police power” and leadership that was “unable or unwilling to stop it,” James said at a press conference announcing the lawsuit, filed in federal court in Manhattan.

So elected NY officials are attempting to reform NYPD and other police. This raises a serious question: what is the eventual outcome when security services no longer have advocates in government? NY isn't going to go Republican, and Democrats and their voters have lost faith in the police. What are the political options of police in persistently blue places?

is anyone surprised that the kenosha shooter is onboard with the proud boys?

Prosecutors are now attempting to have the conditions of Rittenhouse's bond modified so that he is prohibited from possessing or consuming alcohol or being present in any establishment where alcohol is served.
Prosecutors are also asking that the 18-year-old be prohibited from making any public display of any "white power" or "white supremacy" signs, symbols, or hand gestures and have no contact with "any known militia members or known members of any violent white power/white supremacist groups or organizations," including the Proud Boys.

I guess it could never have occurred to them that he might go for a beer or make hand gestures.
Epstein didn't kill himself

yes because when i’m out for a beer with my pals i pose for photos with a white supremacist gesture all the time.

i can already imagine your incandescent rage if a black person was out on bail after shooting someone (LOL) and was pictured in a bar throwing up black power militant fists. “omgggg see they’re planning to overthrow society this is exactly what you liberals keep ignoring”.

Well thats why black people are usually kept in custody.

Its funny, we fought two wars to prevent the Germans taking over the west, you seem positively enthused with the idea of being ruled by africans.

Britain and America were thoroughly white supremacist (and anti-semitic) at the time, along with most of europe, once again you're talking nonsense.
Epstein didn't kill himself

racial attitudes were different, yes, but white supremacist: no. not officially.

of course the propaganda simplified the picture, but even still, the war was still fought between powers with fundamentally different visions of society: open, free democracy versus fascist totalitarianism.

125,000 african-americans served in WW2 who would probably disagree with your characterization of the allies as being 'white supremacist'. presumably they were fighting for the idea at the heart of american democracy -- very different to the ethno-nationalist, fascist creed espoused by nazi germany.

too bad, you bootlicking quisling. 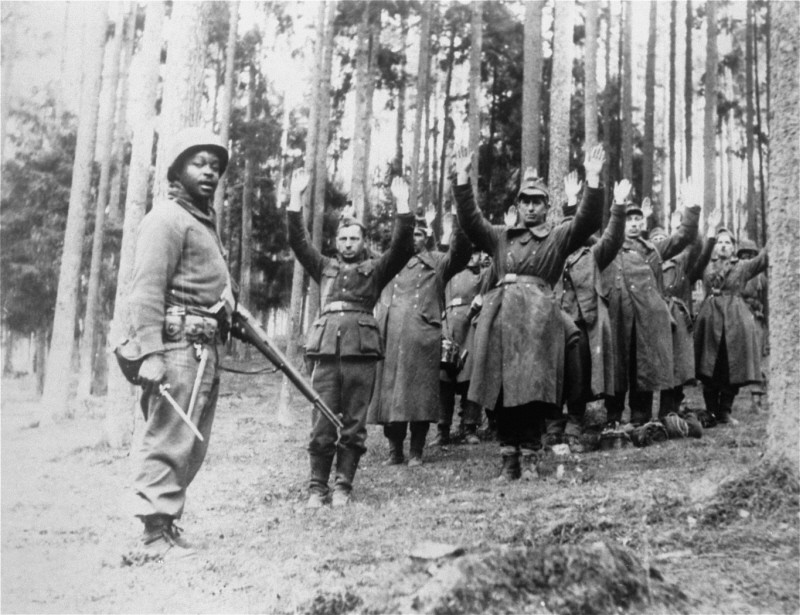 Paris saw the beginnings of an African-American community in the aftermath of World War I when about 200,000 were brought over to fight. Nine tenths of the soldiers were from the American South.[1] Many black GIs decided to stay in France after having been well received by the French, and others followed them. France was viewed by many African Americans as a welcome change from the widespread racism in the United States. It was then that jazz was introduced to the French, and black culture was born in Paris. African American musicians, artists and Harlem Renaissance writers found 1920s Paris ready to embrace them with open arms.