I'm sure a lot of them are users.
Русский военный корабль, иди на хуй!

the real creator of divides and inequality is the expensive fee-paying school system before. that's how bloviating mediocrities like johnson and co rise to the top: connections and polish. they attend $50k/year schools that train them to be exam-eating machines and smooth talkers. the network of power and patronage extends all the way from rugger matches and schoolfields to gentlemen's clubs and retirement.

There is/was a pathway like a paved road - Eton - Balliol - Government, Oxford has been part of the problem for centuries.
Русский военный корабль, иди на хуй!

There I solved it. 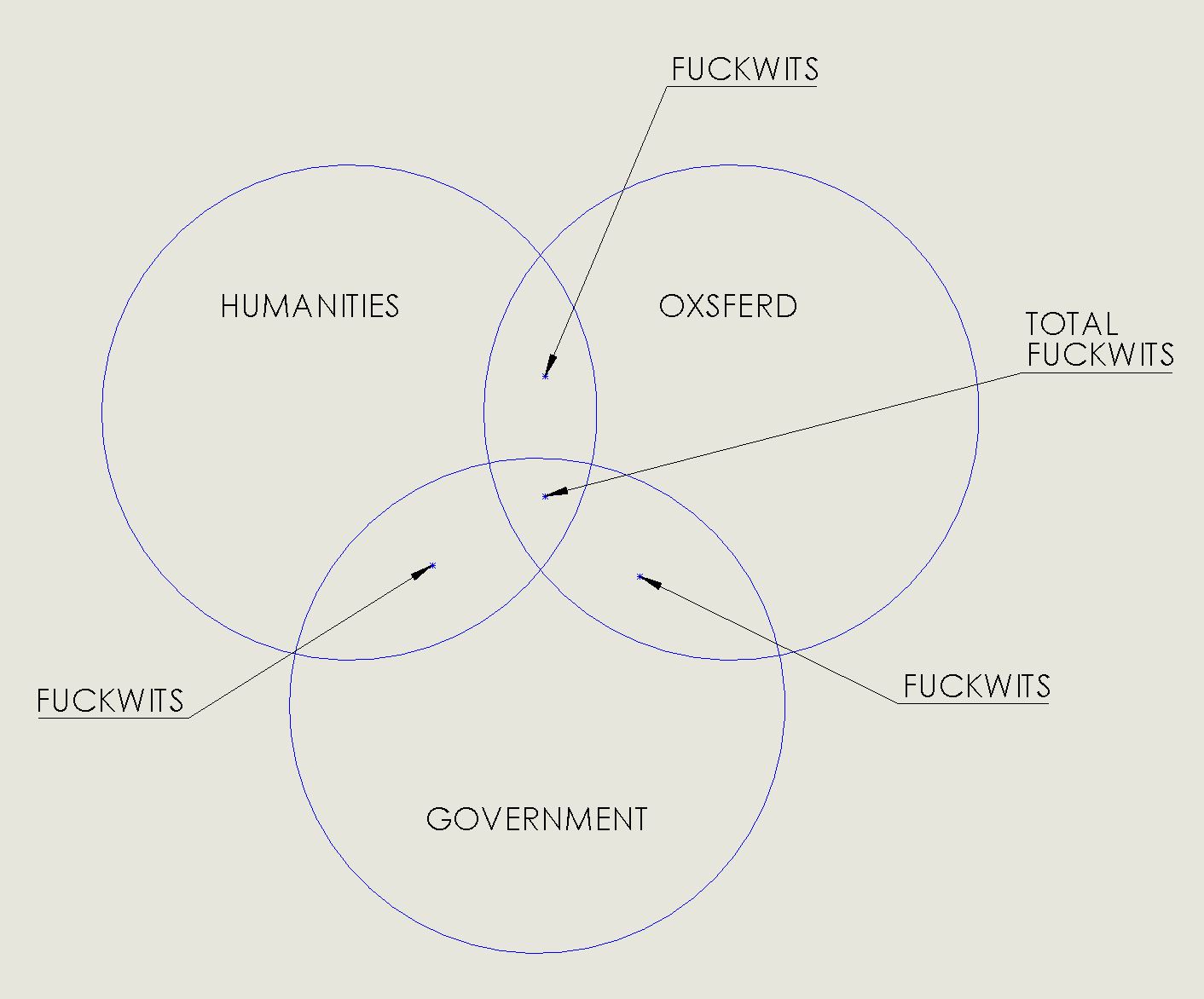 Those are very small points in that Venn diagram you're indicated. Maybe you're finally coming around.

Those were dots to link the arrows to, I'll fix it.
Русский военный корабль, иди на хуй!

A spokesman was asked WTF happened "I don't know, must have been a mixup, we've been parting pretty hard though, LMAO"

data is still coming from the lancet this weekend, we're talking pre-press at this point and still much bigger datasets to be gained from much bigger trials.

partly the media's fault for talking up a side-story, really, that people given 1.5x jabs in a small and unrepresentative group (age, ethnicity, etc) had 90% success.

the overall success rate is still much better than the other 2 vaccines available, even still, especially considering it doesn't use fussy mRNA technology.

the US CDC is prepared to approve a vaccine with a 50%+ hit-rate so, as long as they satisfy the sample size requirements of the US authorities, it'll be fine.

Seems like a schoolboy error, and seems you didn't even read the article.
Русский военный корабль, иди на хуй!

Those were dots to link the arrows to, I'll fix it. 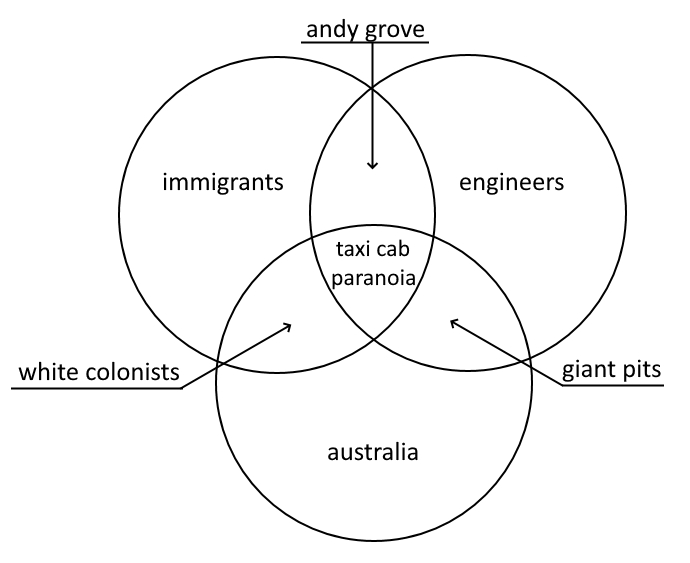 Thats got nothing to do with the pandemic at all.
Русский военный корабль, иди на хуй!

What are you talking about, I just removed the dots.

Seems like a schoolboy error, and seems you didn't even read the article.

i’m sure you’ve read lots of papers about large trials and sample sizes.

Me: "the familial/societal toll of losing tens or hundreds of thousands of young men in war is more devastating than the losses in this pandemic, as the vast majority are over 65s"

You: WhY dOn'T yOu VaLuE hUmAn LiFe YoU mOnStEr

Seems like a schoolboy error, and seems you didn't even read the article.

i’m sure you’ve read lots of papers about large trials and sample sizes.

Still not about the sample size, the wrong dose was given by accident, try reading the article.

you do realise how large trials on sample sizes of 10,000+ are undertaken right? it’s delegated to many many small teams in disparate regions normally (iirc the oxford vaccine was being tested extensively in brazil, for instance). yes questions should be raised but you’re talking about it as if the university of oxford can’t conduct an experiment.

as always, DKB. i’m sure you read lots of medical papers. please, tell me more!

10,000 people aren’t queuing up outside the oxford camera to take part in the test dilbert. these are huge trials undertaken in multiple countries over many months. mistakes can be made. that’s why statistical transparency in the results is important. and that’s why i said the media are semi-responsible for immediately running with ‘vaccine is 90% effective’ lines.

lol, the city I live is a great litmus test for how bad things have gotten. we finally got some public demonstrations of covid hoax protests!

we even had a BLM protest in the summer

as i said above, even its general effectiveness puts it in a better performing category than the existing much-applauded vaccines. that and it can effectively be distributed along the same networks as ordinary food-supply logistics, because it's fine at fridge temperatures. good luck getting an incredibly expensive mRNA vaccine up to a mountain village in italy or, heaven forbid, the pampas of brazil. they have to be kept at something like -70 degrees.

in general there has been way too much overhyping and attention given to every positive story about covid, as would be expected. it has distorted the science and probably stoked a fair amount of suspicion and doubt on all sides. the whole world is pausing its breath waiting for deliverance from this literally global catastrophe. no surprises the signal is easily and quickly distorted.

science publishing doesn't do press-releases for arXiv or pre-press stuff normally for a reason. peer review and proper editorial work gives research findings their proper going-over and revision. if there's methodological flaws or inconsistencies in a small portion of the data (ca. 3,000 people for the 90% rate, afaik), this can easily be explained and taken into account in the significance findings of the full paper. i'm not going to belabour all the totally routine statistical methods available to scientists to derive significance/p-values from their work (frankly i hardly understand them). but the experiment isn't 'broken' because a few people received an inconsistent dose. it's just a practicality of large, multi-agent clinical trials.

it's been described as a potentially 'serendipitous' complication, i.e. an accident that might unlock a better outcome. you know, many things in science - and good science - start out that way. like, er, penicillin. what would make it highly questionable, and indeed bad science, is if they tried to fudge the method/results in their paper and to construe that the 90% rate is applicable to a much wider sample. which, obviously, they haven't. all of the vaccine testing protocols in their large trial were approved by the relevant bodies. so we should give the paper and its authors the benefit of the doubt.

at the end of the day, the real breakthrough here is an affordable, easy-to-manufacture, easy-to-deliver vaccine with a working mechanism. governments around the world are willing to throw their money at vaccines with even 50% efficacy. and that is entirely to the credit of oxford researchers and people who have been working around the clock for the better part of a year.

lol, the city I live is a great litmus test for how bad things have gotten. we finally got some public demonstrations of covid hoax protests!

we even had a BLM protest in the summer

i wouldn't really conflate BLM with the weird anti-vaxxer/flat earth/david icke/'patriot independent free thinker' movements. BLM actually has an actual point. whether or not dundee is a hotspot for death in police custody is sort of besides the point. you can march in support of a cause.

the anti-vaxxer lot seem to tap into a weird subterranean underworld of facebook groups and 'public, community news'. you notice that a lot of the pizzagate/Qanon people are basically like suburban/small town mothers, who get dragged into the deep end of crazy with stories about 'child abduction', which sounds fair enough. but madeleine mccann it fucking ain't. i don't think they realise how quickly they start to lose grip of reality.

I'm sure a lot of them are users.

by the way, a decent proportion of black voters are supposed to have swung to republicans, as per exit polls, due to perceptions that biden-harris are 'tough on crime', in particular on drug crime. kamala harris was attorney general of california before being elected to the senate, and both her and joe biden prosecuted 'the war on drugs' in an extremely tough-handed way. some black voters literally went republican due to this. you are living in an upside down reality over there in the antipodes.

The Republicans want minorities taking drugs, why do you think the CIA set the drugs trade in the first place?

so what the fuck are you talking about, BLM protestors are all also drug dealers or drug takers? it's just dumb calumny.