We should follow the Soviet Union's example and ship our political troublemakers to Alaskan work camps. You know, with the help of overbearing police power.

now all we need to do is unpack authoritarian intelligence agencies tasked with carrying out the whims of an autocrat ex-spy going into foreign countries and poisoning and assassinating people, and trying to disrupt democratic elections and processes.

i seriously doubt that^ is "all you need to do" atm. you have bigger problems - like, a lot bigger.

edit: fuck you, newb. couldn't you wait a second longer?
if you open your mind too much your brain will fall out.

We have one of your communist statues in Seattle. If you want it back, fight us for it.

my communist statue? O_o
pics, or it didn't happen.
if you open your mind too much your brain will fall out.

So, Shahter, care to give your opinions or express your joys on the collapse of the West?

x
What bloody man is that? NOT MACBETH

He's not here to gloat about US coronavirus or race protests at all. He just wants some new reading material.

Can respect that
x
What bloody man is that? NOT MACBETH

he's very hard to take seriously. he's been arguing for the last 15 years that the west is the most corrupt, failed, venal civilisation in the history of the earth, and how everyone has it wrong about russia ... and meanwhile putin is still in power, after having rewritten the rules for himself and cycled out a useful puppet replacement, etc. yeah, totally legit form of government.

ah, this one. a lot of lenin statues here still, so you keep it. if nothing else, it's bronze - you could sell it for metal scrap at least.
if you open your mind too much your brain will fall out.

We prefer it in place so we can vandalize it every now and then. Think of it as a trophy.

re uzi: In my anecdotal experience, politics has to be by far the biggest strain on Russo-west internet friendships.

i don't think the west is collapsing. too much shit happened too fast to properly manage, well, duh. but it's not like we, as a civilization, have never experienced anything like it before.
that said, everything comes to an end at some point. what we are used to call "modern west" is not an exception. i just hope if the west, indeed, collapses, the capitalist insanity it's been operating on doesn't survive it. because, much as i hate to admit it, no other place in the world can sustain any kind of new socio-economic structure atm. russia is going fascist way, and china's been repurposing whatever they could borrow or steal from others for so long it's been looking like they can't do squat on their own anymore lately.
if you open your mind too much your brain will fall out.

so it's the western power's job to figure out a way to save humanity, and you're blasé about russia's own trajectory?

ok, makes sense. russia has always been the developmentally impaired cousin of the west, anyway.

We prefer it in place so we can vandalize it every now and then.

i know, i know. you seem to really like vandalizing shit, especially the kinds you don't understand. it's okay, bronze will bear it, i'm sure.

re uzi: In my anecdotal experience, politics has to be by far the biggest strain on Russo-west internet friendships.

maybe that's because it's becoming increasingly hard to take whatever dubs as "politics" seriously lately?
if you open your mind too much your brain will fall out.

no. the powers - those based on capitalism - will surely fail. it's the western people's job to figure stuff out.
if you open your mind too much your brain will fall out.

We prefer it in place so we can vandalize it every now and then.

i know, i know. you seem to really like vandalizing shit, especially the kinds you don't understand. it's okay, bronze will bear it, i'm sure.

Vandalism is definitely a trait, in all of history, unique to the US. /s

Spraying the Lenin statue though is kind of a Fremont tradition of ridicule at this point.

Anyway, a deeper look into the story behind it, the purchaser, and the sculptor:

no russkies allowed
if you open your mind too much your brain will fall out.

tl;dr on the previous wiki link.

Is anyone else seeing these pop-ups in their area or is this a South Orange County special? 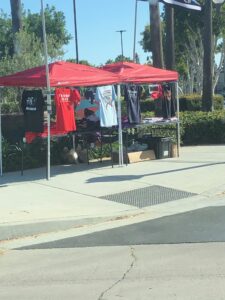 I'll try to take a better picture today if I come across one. WTF is this?

something about that circa-2004 picture resolution/colour palette, plus craigslist, is giving me a huge 'american history x' vibe.

this truly is going to be the most graceless presidential exit in america's history. the guy who mail votes is scaremongering about ... mail voter fraud!!!

I wonder if the trend of people to toss whatever substantive point an article makes out the window because "BBC, CNN, and political slants" will see growth in upcoming months.

i really want to see this HBO interview. oh my god so funny.

In new polling, almost half of Americans (46%) report knowing someone who has tested positive for the coronavirus. Only 29% of Americans have a “fair amount” or a “great deal” of trust in the federal government looking out for the best interests of them and their families – that’s a new low.

So I tried to watch the HBO interview and I just couldn't finish it. It's so deeply painful to watch. Trump is infuriatingly dumb.

I don't know what people in the future will make of this episode in history but looking at this man's election and stint as president, I become deeply cynical about democracy as a form of government.