The legendary Australia vs New Zealand Rugby World Cup final has finally materialised! Should be a good one.
[Blinking eyes thing]
Steam: http://steamcommunity.com/id/tzyon

The legendary Australia vs New Zealand Rugby World Cup final has finally materialised! Should be a good one.

usually hyped up match-ups like this in most sports end up being borefests but we'll see.

Yeah, World Cup finals have become pretty tedious affairs to be honest - at least for the neutrals; if your team is playing then it is incredibly stressful. The best rugby is generally played in matches that don't mean a Hell of a lot.

However Nigel Owens will be refereeing it and he favours an open flowing game.
[Blinking eyes thing]
Steam: http://steamcommunity.com/id/tzyon

They will just cancel each other out in the middle of the field for most of the game, wont they?

Other than Wales being in it, its The Final I'd like to see, other than the fact I doubt I will get to.  4pm on a Saturday - grow up. Whats wrong with 7.30 on a Sunday night?

I don't get why they've put in on so it clashes with football.

Im sure in recent tourneys the final has been evening time on a Saturday or Sunday.  Perhaps this time suits The Southern Hem better?

Lol, no. Here it airs at 5am, that makes it 3am for most of the east coast of Australia - 2am in Queensland. Would be much better if it was later in the evening.

I am glad it's on Saturday rather than Sunday in the UK 'cause that would make it Monday morning here.
[Blinking eyes thing]
Steam: http://steamcommunity.com/id/tzyon

A few hours later then would be better for everyone.

The dick heads, what a shame after this tourney has been well planned and executed.

Well in fairness they were picturing England, (or at least one home nation,) in the final, not a Bledisloe Cup match.

Interestingly in 2011 when it became clear either Wales or France would be in the final it was delayed to a 21:00pm kick off time in New Zealand so that European countries could watch at a respectable hour. Kind of a shame the favour isn't being returned but whatever.
[Blinking eyes thing]
Steam: http://steamcommunity.com/id/tzyon

Watched the bronze final. Was a decent match though so much of it seemed to be about honouring players who were retiring. Suppose tomorrow, (for me, today for others,) might be more of the same with the exits of all the retiring All Blacks and a couple of Wallabies too.

Gotta say I've been a bit anxious. More so than before the 2011 final despite how close that turned out to be. New Zealand sports history is full of times we should have won but didn't. Australian sports history is just full of wins. It's really hard to see how the Wallabies can win - but they could. The dominance we've had over them over the years amounts to nothing. Start again, both teams at 0-0, 80 minutes to decide the victor.

Everything in my head screams an All Blacks victory. The problem is that Australia has been hard to gauge. They've been so terrible over the last few years, yet this year they have really turned things around. Are they good now? Or, as their victory against Scotland attests, are they just lucky? Are they going to be found out or are they going to show what they can really do? Impossible to tell.

i tuned in to Aus - NZ rugby match, and the score was 21 NZ - 10 Aus.
i have no idea about the scoring, the plays, but as an 'Merican the violence was beautiful!

That's the stuff Steve, good to hear. Thankfully it was actually a really good final whereas usually they're a bit stiff and uncomfortable.

Great sight to see after a fantastic contest.

Definitely got a bit scary there after Ben Smith got binned and Australia came back with two tries to take it to a four point game. There was a huge need at that stage for the All Blacks to get a shot in the arm and Dan Carter did it with something like his eighth career drop goal in 112 tests. I've never seen him more determined, one of the very greatest to ever play the game ending his playing career for New Zealand in the greatest possible way.

So many utter champions playing their final game. Conrad Smith's final play as an All Black, so fittingly understated yet crucial in setting up Milner-Skudder's try. Ma'a Nonu running and tackling like a demon and scoring a fantastic runaway try off another magic Sonny Bill Williams offload. Dan Carter focused like a laser beam, displaying just why he is considered to be one of the most complete players ever. Captain/King/Lord/Sir Richie McCaw being everywhere and doing everything, an utter superhero. Even Keven Mealamu coming from the bench and injecting his own combative front row play to close things out. What a hole they will leave. What a way to bow out.

Australia were excellent. Their defence, vision, opportunism, it was all there. Michael Cheika has returned them to being among the best. Some exceptional players in a team that has remembered how to be a team. With the All Blacks going into somewhat of a re-building stage - which they will have prepared for mind you - Australia has a real opportunity to emerge as a true power once again.

(Also I hope Matt Gitaeu is okay, he took one Hell of a hit to the noggin.)

(This is the standard UK commentary which sounds kind of resigned. I listened to the NZ commentary - it was hilarious because they knew they were only broadcasting to NZ audiences so were like excited children. They groaned when Kuridrani scored his try and commentator Justin Marshall started cheering "Go Beauden!" ahead of Barrett's try. Unprofessional but they didn't need to be, added to the occasion.)
[Blinking eyes thing]
Steam: http://steamcommunity.com/id/tzyon

Kind of traditional in rugby but I don't think there's much to complain about. I mean yes, that Milner-Skudder to Kaino pass was clearly forward and, (ironically,) Wayne Barnes missed it. It led to three points but that's what happens, (as Scotland knows.) If the game was within three points maybe Australia would have an argument. But it wasn't three points it was 17 and there was nowhere near 17 points worth of errors from Nigel Owens who was talked into giving Ben Smith the yellow card, (probably the right move, it'd have been a bitch-fest if he didn't,) and let Kepu get away with a late shot on Carter followed by a high shot on Carter and just before Nonu scored a high shot on Milner-Skudder. Three offences, net result one penalty to the All Blacks. Then there are the reports that Pocock stamped on McCaw's face - completely unintentionally I think, Pocock's not a dirty player - but certainly more damaging than McCaw's phantom elbow that the media got stirred up about despite the fact looking at the video would have revealed it never happened.

Fair contest, fair result. At work tomorrow I'll get to listen to Alan Jones being more bitter than usual which is a plus.
[Blinking eyes thing]
Steam: http://steamcommunity.com/id/tzyon

Let the whingeing and blaming of the referee commence.

Bit of a commotion outside the office at around lunch time. Had a look. 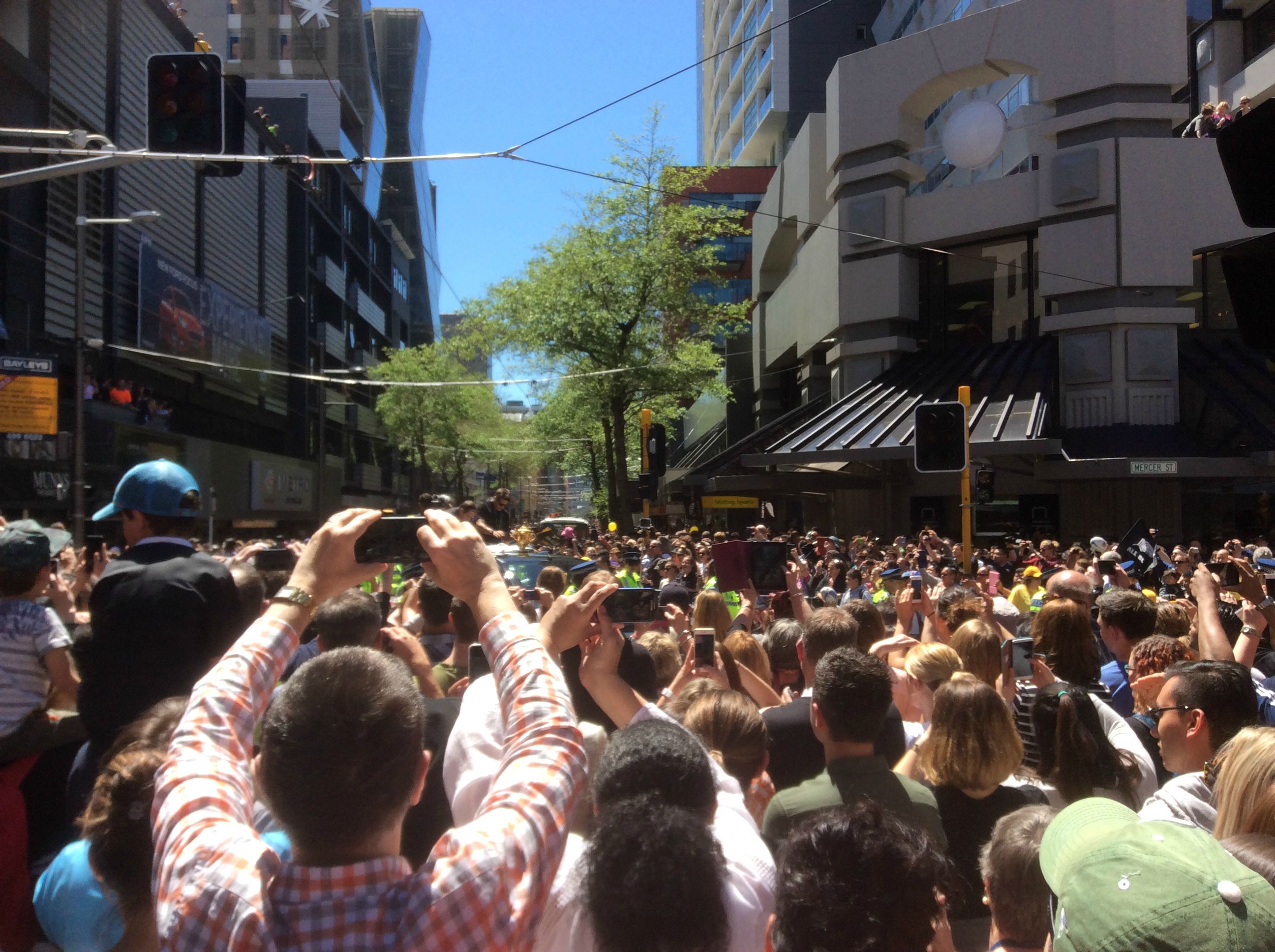 Seems like it sometimes but then it is heading into summer.
[Blinking eyes thing]
Steam: http://steamcommunity.com/id/tzyon