Can't decide between Hazard, RVP or Tevez for captain next week..

How expensive are they?

Tevez and Hazard were quite cheap before the season, but I assume they've gone up a bit..?

barely. Got them in wildcard last week.

wish i'd had tevez as captain this week, but he's still a little bit chubby. and i doubt rvp can pull 2 goals out of his arse in 5 minutes for a 2nd game running. and i really can't afford to buy rvp in anyway, without like not having a midfield.
Small hourglass island
Always raining and foggy
Use an umbrella

Basically everyone has hazard lol
I know fucking karate 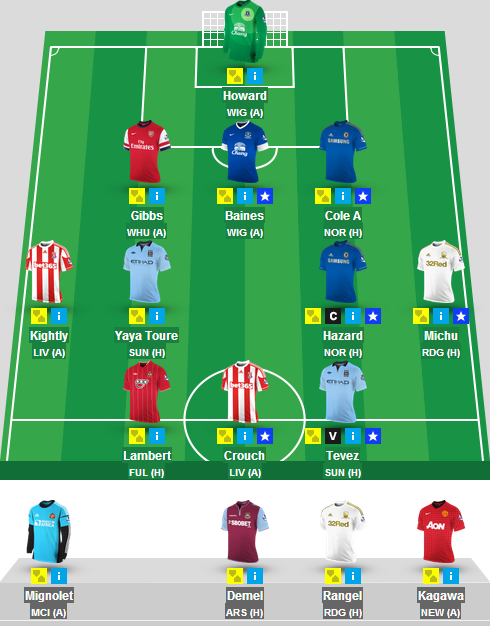 And Pogrebnyak on the bench :'(

Not sure why I went for Michu instead of him... Silly error

"Mancini happy with return to form."

they beat Sunderland 3-0....that isnt a return to form, thats managing to win a race against a child who doesnt know he's taking part

fucking shit week. i only have lambert still to play, he needs to get like 6 goals for me |:
Small hourglass island
Always raining and foggy
Use an umbrella 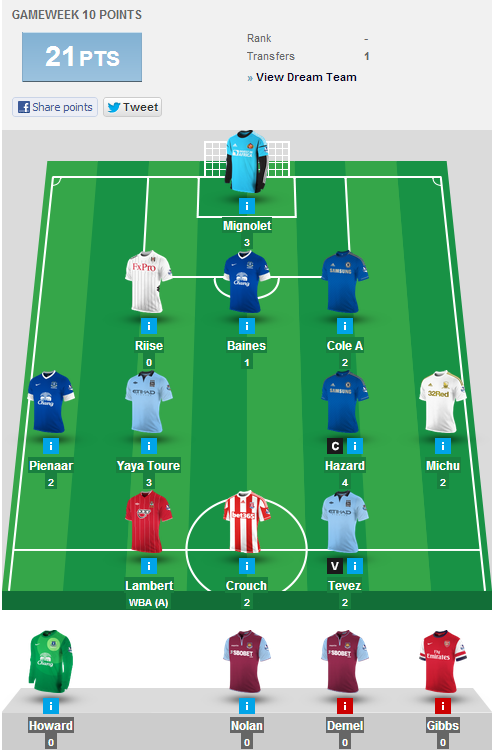 I have 21pts so far as well! Still have Suarez, Pogrebnyakakaka, Morrison and Nelson to play though. To be fair, I doubt anyone's done too well so far.

Half the world has Van Persie as captain, so that's 12pts, and some Fellaini, also 12, and some Cazorla, 7, but other than that.. Meh. Some people may have a Norwich defender due to lol-Stoke-away (I had Paddy Kenny) and City defenders.

yep. points were looking good (the odd clean sheet) until late goals blah blah. it's looking more and more like i need VP, but i'd have to ditch toure (who can be brilliant) and lambert/crouch for him.

Yeah.. He's so expensive though, and everyone has him so it's more a case of defending yourself against others' points than anything else (I'm more a fan of going for players with lower ownership). I have £2.7m spare atm, and am looking to swap Hazard for Mata if he recovers from his hamstring, which'll free up some funds, but not enough. If not, I'll swap Hazard for Sterling and Suarez for RVP.

Jens your lead isn't looking so comfortable now, Coke is catching....I had a bad couple of weeks, hurts to say I sold Tevez and Suarez recently, this week will be better hopefully, made a couple of handy transfers.
I know fucking karate

Yep, slowly but surely catching him!

It looks like FF website accidentally left the "pick team" time for this game week open later than last night. So this guy made 14 subs and got all the best players from both of last nights games, so he can be top of the ranking for this gameweek for a little while...then he'll get -48
I know fucking karate

haha, what a hero

fuck didn't realise there was a mid-week schedule!
Didn't look at my team, normally save it until Friday...
Still...