I had to google too.

Boomer, you hijacked Dan from his public appearance, that was pro! thanks for the pictures . . .

That was AWESOME Boomer

Now go and find out the future locations of Bill Murray, Sigourney Weaver and Harold Ramis.

I had to google too.

there is not excuse for this travesty!


if you ever get rid of that car for any reason, make sure you don't forget to keep the visor.... i would take it out right now and put it in a case tbh

Or for having heard of Blues Brothers, and many other epic movies of american humour.

The man's a legend. If you haven't heard of him, you should be SHOT. Right now. And then nailed to the hollywood sign so people can laugh at you as the birds pick at your bones.

Keep the car hidden away and 20 years from now it will be your retirement fund.

To whoever left me the karma. I have seen the original Blues brothers. Many times. I just never took in the name.

That was AWESOME Boomer

Now go and find out the future locations of Bill Murray, Sigourney Weaver and Harold Ramis.

I guess your car's value increased. Imagine a signed ectomobile on ebay!

Just got back from California this morning. What was supposed to be a rough but relatively quick 15-hour drive home turned into a 21-hour crusade through some pretty nasty snow in Utah and Colorado. This trip was like a goddamn nerd dream and I have so many totally awesome behind-the-scenes pictures of shit you ain't never seen.

Expect an ENORMOUS post in a few hours filled with film car delights.

Allright. So a few months back my roommates and I start watching Scrubs from beginning to end. I've already seen the whole thing but I'm a huge fag for that show so I didn't mind. About halfway through I say, in passing, we should go to the hospital where they filmed this before they tear it down or change it or do something to it.

A little while later I make really good friends with this dude from the Coachella valley, and we vow to hang out the next time I am in California, take the ecto to get In-n-Out or something.

After that, I post this thread and Axel is all, "Dude, I am a really awesome guy with an amazing job and if you want to come see the amazing stuff I see every day, we could probably work something out."

And then we heard about an art auction and movie screening in Pasadena that was part of a fledgling charity. When our car broke down in Ohio, a bunch of people raised money to help me out. Since I do not see myself a cause worthy of charity, I got their permission to donate the money they raised to a real charity.

Then I talked to the guy that owns the largest ghostbusters fan community/boards/forum on the internet and asked if he wanted to come along.

Then three of us fucking drove to California and had an amazing goddamn weekend.

Leaving a horrifying -10 degree Colorado, we drove 16 hours to Los Angeles, and crashed at a friends house in Burbank. In the morning, we got up and planned to go over to the Scrubs hospital (North Hollywood Medical Center) to see if it was being used and if we could coerce whatever guard is there to let us in. On the way there we stopped at Fry's (which we don't have in Denver), where we started thinking about the rest of our day.

The original Ecto had recently been restored for the video game and Blu-ray release, and there were rumors that the Ecto-1A was currently being worked on. We googled the company doing the work and found our way over to Cinema Vehicle Services. Basically, they are a company that owns nearly a thousand cars used by the entertainment industry. When you see NYPD cop cars, NYC taxis, news vans, SWAT vans, school buses, or period cars on tv or in a movie, odds are they came from this place. Stuff like this:

I figured it would be closed or gated off and we wouldn't even be allowed into the main office, but when we arrived we had no difficulty driving in and parking next to a pair of 300Cs used in The Island. I asked Bob, one of the rental coordinators, about the Ecto-1A, and he replied saying that Sony had bailed on the restoration and taken the car back just as they were getting started on the engine. Lame.

And then, without any kind of provocation, Bob stood up and told us he was going to show us around the lot. We piled into an electric cart and cruised over to the first of several warehouses. Right outside he point to this, the truck from Tango and Cash.

Upon entering the first warehouse, he drew our attention to this unsuspecting motorcycle.

That's the motorcycle that Iron Monger throws at Iron Man. And behind it..

One of the many screen-used General Lees!

Over in the corner, a pile of Eleanors from Gone in Sixty Seconds.

Next to that, oh hey it's Tony Stark's Cobra, which he ruined by dropping the Mark II on!

At this point, we were having trouble breathing.

A ways over, one of the Goldmember Sparrows from Austin Powers.

He then took us outside and drove us around the lot, where we saw a ton of 70s cars currently being used in the Green Hornet, the Landcruiser from The Mist and 50 First Dates, and several old Broncos from Suns of Anarchy. We passed more cabs and random police cars with markings from departments both real and fictional. There was an entire row of SUVs with news antennas that were apparently used in Angels and Demons last year.

Down at the end was this

After that, we headed over to Sacred Heart. We found the gate wide open, with no guards, and no "no trespassing" signs. We drove right in and started taking pictures.

After wandering around and peering in the windows we left for Warner Brothers. I'd talked to Axel a bit on IM about us heading out and he said he'd pass the word on to his boss. I called his boss and tried to set up a time, but never heard back from him. I was fairly pessimistic at this point, preparing myself to be told "no, there wasn't enough time to plan a special tour for you guys, you'll have to take the full studio tour with other guests" and having to pay $45 a person to do so.

We showed up, and I managed to catch Axel while he was in the main lobby. A few moments later, out comes his boss who shakes my hand and tells me how excited he is to have us there. He then brought out his assistant and told her to take the three of us on a free private tour of the transportation museum and whatever else we anted to see. What the hell? Who the fuck is this lucky?:psyduck:

The assistants name was Amanda and she loaded us up in a cart and took us to the vehicle department. My. God.

After this she took us around the lot and showed us pretty much everything. Hazard County, the city corner where 'Cuban Pete' from the Mask was filmed, the 'Gremlins' mogwai shop, upside-down Spider-man kiss alley, Stage 16, the fire department, so on and so forth. Amazing stuff, positively blew my expectations out of the water.

The next day we started off by downtown to see the police station, USBank tower, and the SR-71B at the Memorial Coliseum. After that we headed over to the Biltmore Hotel, where the first "bust" from Ghostbusters was filmed. We pulled up lights and siren flashing, the whole deal. The ballroom is now the main lobby, but other than that the interior is identical.

Around the corner, a commercial for McDonalds was being filmed with a... McDonaldsmobile.

Counts as a theme car.


After the Biltmore we headed over to Ladder 23, which served as the interior for the firehouse. It's been used in tons of other stuff like The Mask, as well. The immediate area around the firehouse was, pretty much, a demilitarized zone and our friend from Minnesota refused to get out of the car to see the firehouse. So a driveby had to suffice.

After that we headed up to the Griffith Observatory, got some pretty cool pictures up there, too. This is the only thing I think you guys would be interested in seeing from there...

The charity event took place that night, and we headed over to Sean Bishop's house in Pasadena. He works for Dreamworks, owns another large prop-building forum, and was one of the artists contributing to the art auction. He lives in a craftsman home about a mile from the Gamble House, better known as the on-screen residence of Doc Brown.

Anyway, we pull into his driveway right behind his recently-completed DeLorean Time Machine.

But in the back yard, in front of his shop...

1959 Miller-Meteor Duplex. Spot-on model and year, and in better shape than the original car, even after it's restoration!

His workshop is the best. Silicon molds for ever laser gun, helmet, chestplate, robot art, and utility belt you can imagine. His garbage can is an R2-D2 body shell.

He had a Noisy Cricket hanging next to the metal shears on his work bench.

We ended up crashing at Sean's house, his hospitality is legendary. Other things in his collection include original Mr. Fusion and flux capacitors, Billy Murray's stunt pack from where he first gets slimed, and the original hero mold for the Rocketeer's jetpack. His cats sleep currently use it for a bed.

The next morning we shot the shit in his garage for a half hour or so before driving home. 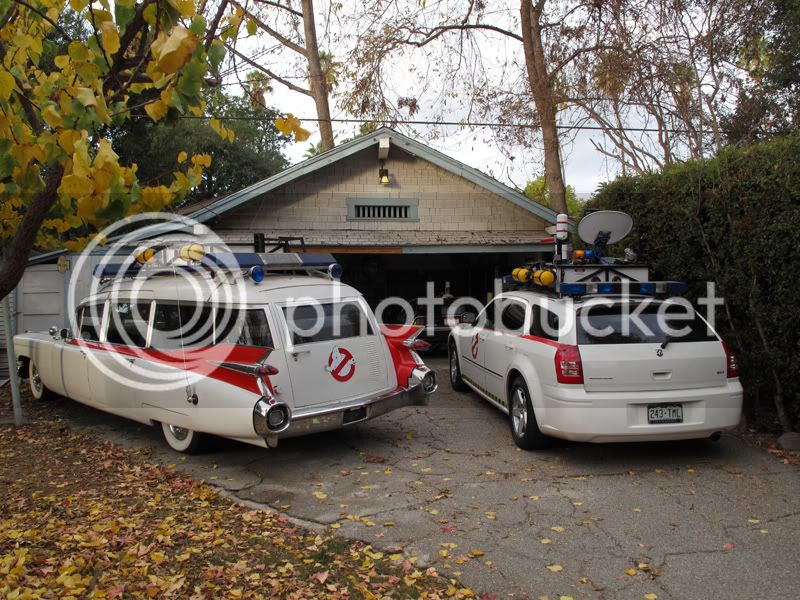 Hell of an epic trip.

Hell of an epic trip. Thanks again, Wes!

quoted for truth. thanks again for sharing, those are some completely captures!

Never ever ever in a billion goddamn years.

Never ever ever in a billion goddamn years.

Ty said it best in another thread, and this is how I feel

Despite overwhealming feelings of spite, bitterness, envy, jealousy and the strong urge to jump on you and bite through your jugular, I wish you a hearty congratulations.

I'm actually really stoked for you dude, 's'awesome. Those other feelings are there too but I'm still happy for you.

Cool.  Very, very cool.
I stood in line for four hours. They better give me a Wal-Mart gift card, or something.  - Rodney Booker, Job Fair attendee.

I c wut u did there
EE (hats