lmfao at putting boris johnson and liz truss in the company of ... erm, hitler, stalin, and mao.

you sound even more hysterical than people who compared trump's administration to straight-up fascism (hint: it wasn't really even close either).

I don't think you understand how history works.

Johnson was advised the covid death rate could be colossal, he sat back and did nothing.
Русский военный корабль, иди на хуй!

i don't think you understand how morality, or the law, works.

negligence or idiocy are not the same things as prosecuting a fucking genocide based on a political or explicitly hateful ideology.

I read an interesting Atlantic article that argued that "social media" is a geriatric institution now. The biggest companies aren't as profitable anymore, userbase are either declining or stagnant, and arguably it isn't as creative and fun anymore. Too politicized and cultured war like everything else.

ditto with all the big venture capitalist funded servant apps. the good times are over on those. good riddance to the exploitative trash.

“Unprofitable “on-demand” services like someone bringing a coke to your door gave people a sense of affluence in a decade of stagnant wage growth. But they were subsidised by investors, and now the money is drying up.” 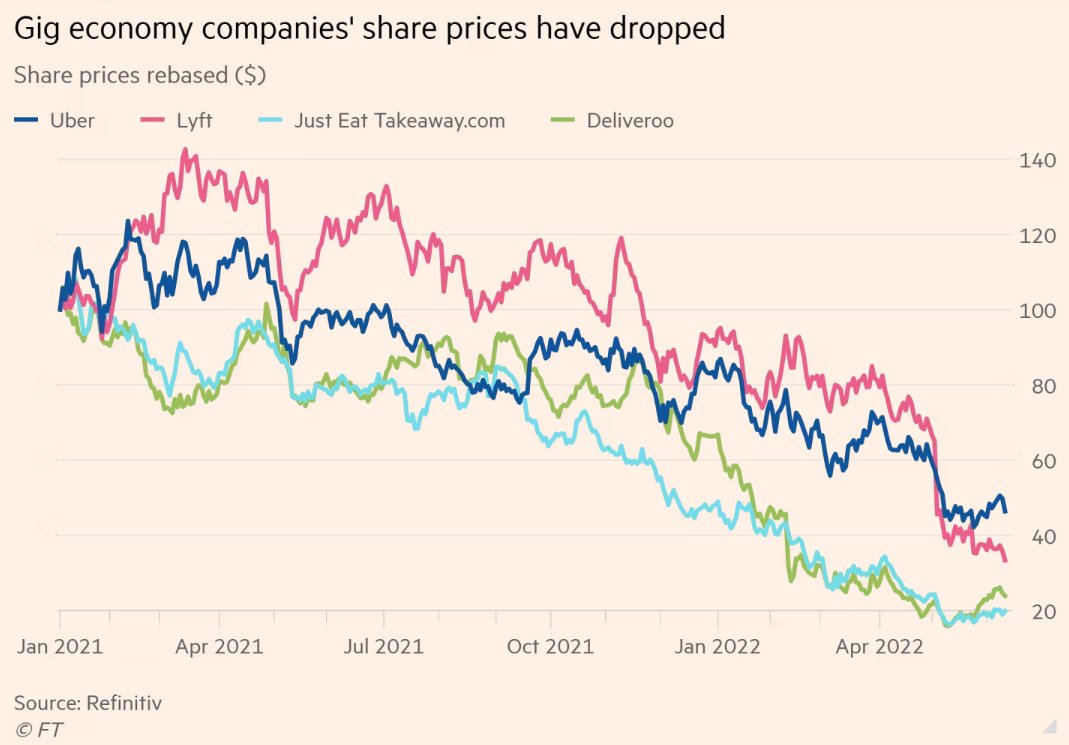 it’s not even as if social media is out of date and passé now — it’s actively harmful for grandma and uncle jimbob. we had a hot decade there of totally unregulated and toxic companies mainlining outrage for clicks and engagement.

I used UberEats a lot during my WFH phase because it was easier than getting dressed to go out to get a cup of coffee.

Now that everything is opened up again and every chain food place has an app with a "Deals" section, I don't use UE anymore.

The venture capitalists at Uber were hoping self driving electric cars became feasible enough to replace all of the drivers and balance the books. It could probably work now in an empty suburb but in the big cities, where the urbanite money is, you would end up with run over people and vandalism.

Speaking of urbanites...the cities are making a comeback. Companies are rolling back their remote work options. People want to go to concerts and clubs again. You could drop super COVID on Brooklyn and plenty of people would still be desperate to move. I want to live in Brooklyn.

my publishing house downsized to a smaller boutique office in some hipster regenerated brewery district. it was a giant plate glass corporate HQ before split over 3 entire floors.

people are working remotely 3/5 days of the week afaik. and there’s widespread talk of trialling a 4-day work week.

this is representative of lots of companies in the UK at the moment. offices are not returning in the way they were before. being in corporate real estate must be a drag right now. still, those ugly plate glass buildings would convert nicely to blocks of uglier studio apartments.

“Antibiotic-resistant strains of both [E. coli & S. aureus] were found in rivers adjacent to pig and chicken factory farms, as well as in slurry runoff from intensive dairy farms.”
https://t.co/ymuiyO8UZE

remember when dilbert tried to make out it was only india who were sleepwalking into a superbug apocalypse because of lax regulations and poor management?

remember when i told him that the west was facing hospital superbugs and antibiotic resistance in the general population too?

‘the next global health emergency is going to come from indians infected with e. coli!’

yeah, that was pretty funny.

Except India is one or two decades ahead and racing faster day by day
Русский военный корабль, иди на хуй!

citation needed, otherwise you’re just making stuff up. we have superbug outbreaks in our hospitals all the time. quantify your bullshit.

MRSA Developed in India in the 1960s
https://www.chemistryworld.com/news/poo … 54.article

first isolates of MRSA were found in the UK. not that it matters because, you know, it’s a bug that develops in hospital settings the world over … using the exact same antibiotics.

india doesn’t have access to expensive or higher-tier antibiotics. it’s not some unique failing of their medical practice that they are particularly susceptible to superbugs. rich nations encountered the same problems in the 1960s too. the difference is we could pivot to novel treatments and lean on our multibillion dollar pharmaceutical conglomerates.

how are you so consistently wrong and malign in your interpretation of everything?

liking to bet that australia is ahead of india on the bovine or swine flu stats, eh?

The fact is MRSA developed in India and was transmitted to the UK.

india doesn’t have access to expensive or higher-tier antibiotics

Good, hopefully this means they can't fuck them up.

We should wall them in now.
Русский военный корабль, иди на хуй!