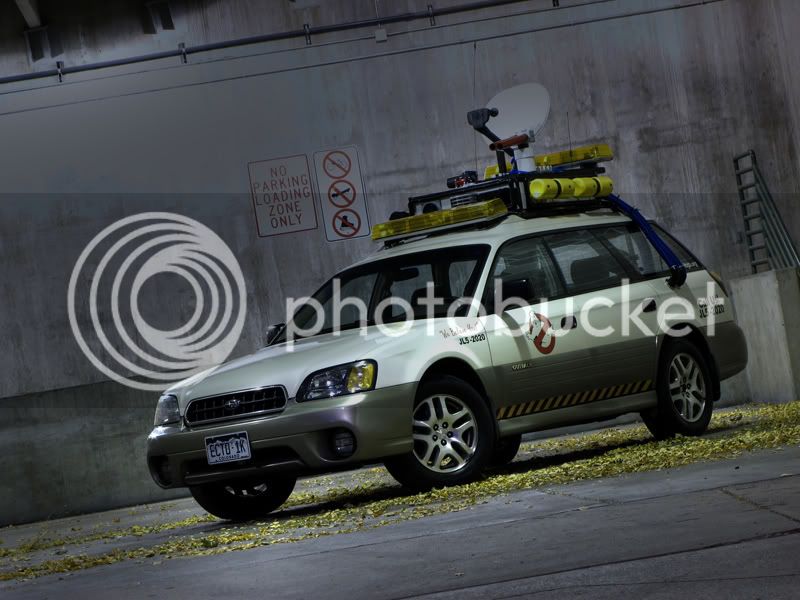 I posted about this waaaaaay back in the day, here is a re-cap.

In early October of 2005, I went to a midnight showing of Ghostbusters at a local theater with one of my best friends. We'd been fans since we were little kids, and we'd grown into nerdy near-adults with interests in science fiction, computers,technology, and filmmaking. I'm Kevin, my friend was Will. As we left the theater we discussed building packs and making uniforms, then going up to the Stanley Hotel on Halloween and pranking them. Essentially we would run out with smoking ghost traps, handing the hotel manager a bill for $5000, and then run away. Then it hit me. "Will... I'll make you a deal. You build the packs, and I'll build the car." A few months later Will moved to New York and the plans were shelved.

Fast-forward to the following spring. Will has moved to New York, and the task of building the car is up to myself and my roommate, Austin. The first step was getting lightbars. We found the red, blue, and green lights were all incredibly illegal so we opted for a pair of 36" lightbars, which I bought for about $430 each.

Here is a video from our first test of the lights and siren... http://www.youtube.com/watch?v=JKY9C2__4ow

Following two weeks of construction and hundreds of trips to Home Depot, we finally rolled the car out in late September.

Over the next two weeks I added various tubes, tanks, reflectors, and the red binocs up on top.... By October the first incarnation of the ECTO-1K was finished...

The car became incredible popular in Fort Collins. For a while it was sort of a myth, people were telling their friends that they had seen the Ghostbusters car driving around, and their friends said they were full of shit. We would go down to Old Town almost every night an do drive-bys of clubs and bars, leaving people wondering as to what the hell they just saw. We were making appearances on local radio shows and even took the car down to Nan Desu Kan, the anime convention in Denver, where people went nuts over it.

Then on October 26, five days before Halloween, the car was rear-ended by a semi.

After the accident the Fort Collins Coloradoan took interest and did a short article on the car, which got a large color picture in the local section.

Look, it's me in a partially-finished Ghostbuster costume, not looking retarded AT ALL!

The internal damage to the frame, bumper, side panels and rear hatch equaled over $5000 in repair work, so my insurance counted it as totaled and paid me the difference. I was able to coax out a little more money from them due to all the extra work done on the car in terms of the modification. Local radio stations and fans of the car donated almost $200, which was enough to pay for reprinting the graphics for the car. In November I found a 2003 Outback for sale in Colorado Springs, which I bought on the 22nd. By the first week of December the new Ectomobile was back on the road.

A short video I made before sending my 98 to the scrapyard.
http://www.youtube.com/watch?v=JKY9C2__4ow

During the December blizzards we drove around pushing and pulling people out of the snow. Apparently word got out of our assisting people stranded in and around Fort Collins during the blizzard and the local paper did another article on us, this time landing on the front page.

Towards the end of February, radio big-cheese Louis Fowler wrote an article about us for an alternative news weekly, the Rocky Mountain Chronicle, which ended up being a coverstory, too.

Louis with Austin and I during a ride-along for the interview. We drove him around one friday night in costume, terrorizing the drunks and bouncing from party to party.

In March I was invited to join a community of Colorado Subaru owners, collectively known as All-Wheel Pirates. It was mostly STIs, WRXs, Evos, and all sorts of other ricey cars. I was surprised that a dorkified outback wagon was to be welcomed among their ranks. We've since been to several meets at Red Rocks with them.

In April I made friends with members of the Denver Hearse Association(www.hearseclub.com). Okay, every group of car enthusiasts have posers, but fuck, I was taking an Outback to HEARSE meets >.< I actually don't think much of it since we're usually invited. These guys are a bunch of fun. Anyway, on Easter I was invited to come to an Easter egg hunt at the Boulder Cemetery with the DHA. The club was founded by a guy who drives a hearse with batwings and machine guns on it and who regularly writes funny rants about hippies, fratards and fatchicks on his livejournal, so I decided I wanted to meet him. It was a blast. Hearse peoples are good peoples.

Ah yes, this is ALEXI. A 1970 Cadillac hearse that has been painted flat black and covered with all sorts of mad-maxish machinery, including faux machine guns and a WORKING flame thrower. Badass.

Shortly after Easter I decided to rebuild the roofrack. I wanted to make it out of lighter materials and include a better sound system. The old rack was also getting disgusting due to moisture and it needed replacing anyway.

After staying up all night putting everything back together, Austin and I went down to Boulder to crash the CU Sport Car Club car show with Logan (Bruno_me). As we pulled into the lot, judges rushed up to the car and guaranteed us a trophy. Funny.

ONE OF THESE THINGS IS NOT LIKE THE OTHER ONES!

This is me, standing in front of the Ghostchasers' Ectocar!

Allright, it's a chinsy 1st place trophy, but I still think it's funny as hell.

And since then there has been all kinds of crazy fun stuff happening.

On display in Denver at the StarFest science fiction convention. 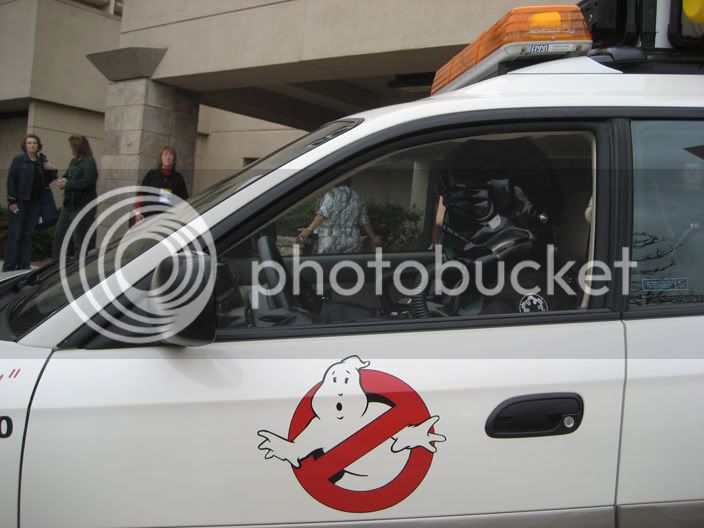 Sent to me by a foaming internet fan.

In front of a dam in Estes Park. Photo courtesy Bruno_me

In June at the Fort Collins Downtown Car Show

At a screening of Ghostbusters in Greeley, late June.

The cars were pretty much a huge hit at Nan Desu Kan, an anime convetion Denver held in September.

In late October I received an email from the editor of a british subaru mag who wanted to do a little feature on my car. He asked if I was able to get some more hi-res photos, and if I could make them a little more 'badass'. I tried... what do you guys think?

Supposedly this one is going on the cover, I guess we'll see when the issue comes out in december.

Having fun in Denver around Halloween.

Wow. That car is famous. Lucky you!

It's quite a bit of fun.

I think you should stick with one thread mate

Not telling you off,, just saying that it would be easier if you had all your cars in one thread so we knew we didn't miss any of your cool-ness


I appreciate you deticating this thread for me though <3

­ Your thoughts, insights, and musings on this matter intrigue me

I've just noticed that on the pic's you have "halogen" (<-- thats in danish) headlights, but in the movie (the awesome'est movie ever btw) you have Xenon in both your fog lights and headlights (which is the ultimate win btw)
­ Your thoughts, insights, and musings on this matter intrigue me

At first i thought "What a nerd" (No offence) but i actually like that car...
I WANT ONE!

you toatally need a mad max car next!

Great. But you should have cropped the dog in one of the pictures

You should get the kit that makes your lights alternate. I think the most awesome part of the story is that you used the AWD and emergency lights to help people in the blizzard. That's mighty decent. Did you get any pics of that flamethrower in action?

Actually, that's just the white balance from shooting at night. If you look again, you'll see that the lightbars are a brighter yellow than the regular amber. It's just a side effect, albeit a cool one!

Very nice job. You should ask for donations and do a world tour
The idea of any hi-fi system is to reproduce the source material as faithfully as possible, and to deliberately add distortion to everything you hear (due to amplifier deficiencies) because it sounds 'nice' is simply not high fidelity. If that is what you want to hear then there is no problem with that, but by adding so much additional material (by way of harmonics and intermodulation) you have a tailored sound system, not a hi-fi. - Rod Elliot, ESP

Some people might call you nerds, but I think that's fucking AWESOME. Dammit, now I'm gonna have to go out and rent Ghostbusters 1 & 2 now. I'm in the mood.

I wish I had that car

Actually, that's just the white balance from shooting at night. If you look again, you'll see that the lightbars are a brighter yellow than the regular amber. It's just a side effect, albeit a cool one!


DAMN I WANT THAT CAR >.<
­ Your thoughts, insights, and musings on this matter intrigue me

That's pretty awesome, much like your Jurassic Park one. Good job!

If I spend more money on the lighting of the ecto, it will likely be for spots on top of the roofrack or LED flashers behind the grill.

If I spend more money on the lighting of the ecto, it will likely be for spots on top of the roofrack or LED flashers behind the grill.

Hmm ok ,, though Xenon would be cheap and give great lighting for you when driving too,,,, nvm it is your money

­ Your thoughts, insights, and musings on this matter intrigue me

Every once in a while ya run across something that is just too cool not to take a picture of...

Every once in a while ya run across something that is just too cool not to take a picture of...

Heeehe.
The idea of any hi-fi system is to reproduce the source material as faithfully as possible, and to deliberately add distortion to everything you hear (due to amplifier deficiencies) because it sounds 'nice' is simply not high fidelity. If that is what you want to hear then there is no problem with that, but by adding so much additional material (by way of harmonics and intermodulation) you have a tailored sound system, not a hi-fi. - Rod Elliot, ESP