Anybody getting one or already have one?  I've pre-ordered it and mine is due to become available for purchase in Q3 of this year.  Kind of on the fence about following through with it though.  I don't like Linux much because of all the command line crap that I have 0 interest in learning, but if I stick strictly to gaming and only on Steam, it should probably be fine.  I had planned on putting Windows 11 on mine, but between the fact that Valve has some pre-compiled shader stuff going on in Proton that's specifically optimized for the Deck and greatly increases its performance, and the fact that AMD/Valve's Windows drivers for the Deck seem to suck and probably aren't a priority at all, Windows on Deck seems like a bad idea.

Still, I watched a video of a guy playing Company of Heroes on it, and it seems like it might not actually be the worst thing in the world for RTS games like I had thought.  And it would be cool to be able to play stuff like that wherever.

Probably going to pass. $400 intro price for not much storage. They added a lock screen after release, wow.

I do have a large-ish steam library, but I feel like it's something I want to distance myself (doesn't steam still get like 30%?) from rather than get tied down with, er, portable hardware. I already have two nintendos, a ds, and a psp 2000, sometimes taken on overnight trips. A couple of those I could hide behind my gigantic pocket-ripping android if I don't want the normies to know that I'M a GaMeR.

It does have an SD card slot for storage expansion.  In testing, the difference in loading times between even the faster NVMe drives offered with the Deck, and a reasonably high quality SD card is somehow not very big for most games, although I don't remember the numbers off the top of my head.

I just don't have very many steam games that I can't do without for a few days (weeks, months … years) that would justify being connected more often. Heck, I'm not even signed on with my phone most of the time. Travel for me, or getting away from an office situation, is an opportunity to pursue some other hobby free of distractions when I'm not driving. Anything but games, lol.

Probably a pretty cool device for someone who can't miss their evening LoL or whatever, occupying a niche somewhere in between that and someone who doesn't want to carry something like a $1.2k+ laptop. Still bulky, though. Bigger than the Switch, isn't it?

Yeah, I think it is both physically larger and weighs more than the Switch.  It's certainly a bit of a compromise of a device.

The thing that really bothers me about it as a new production device of its kind, is that many of its current and future competitors support at least Thunderbolt 3, meaning their USB-C port effectively doubles as a PCI-e slot, which means that: Ideally when you're docked at home and don't need the mobility, you can pair up these surprisingly performant mobile CPUs with a much beefier full-size graphics card that obviously would perform much better and also not steal your RAM for its VRAM(Steam Deck's GPU can borrow up to 8GB of the 16GB of system RAM it shares with the CPU).  Devices like this could potentially become a casual gamer's everything PC if they don't otherwise have use for a laptop, essentially a true PC version of the Switch where it amplifies the power when docked.  Unfortunately Valve deviated from what everybody else was doing and worked out a special deal with AMD, who has always been either late or a no-show to the Thunderbolt party, even though it's royalty-free through the USB standard now, and they've once again neglected to put it into the bleeding edge hardware that's now being used for Steam Deck.

I know it's kind of a niche case at the moment, but it just seems like such a waste when compared.  Although to be fair, those competing devices also cost sometimes twice as much or more than the Deck though.  Valve was surely able to get a deal from AMD in order to bring the cost down this much, because they probably knew they would sell the shit out of these and AMD was more willing to negotiate than Intel was.

It's a concept to keep an eye on at least. Some of Steam's previous offerings though have been either ok or meh. I was never onboard the Deck hype train, if there even was one. 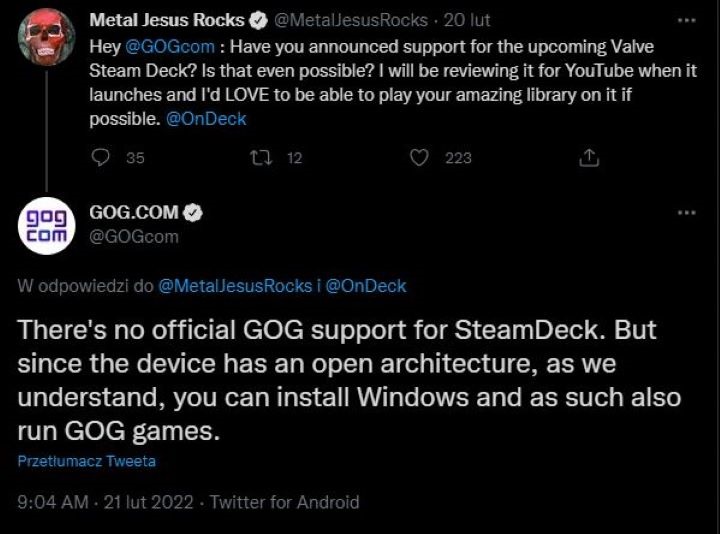 Oh cool, so I can just … install Windows … on my special steam portable to play GOG. Good to know …

Yeah, Valve seems to be firmly on their own with this one.  Nobody with their own marketplace is ready to touch Linux yet, but a lot of Linux gamers are hoping the Deck will be what changes that.  Only time will tell I guess.  I like when everybody can play on the platform they want to play on, even if Linux isn't my particular cup of tea, and Microsoft could certainly stand to feel some kind of significant competition in the OS market from something other than Mac, in order to maybe get them to stop powering ahead with the shit they want that their users don't.  So by all means, more power to the Linux users.

In the x-teen years I've had steam, they've never really impressed upon me how much I need a device with a UI of their design. Desktop Steam must have bloat the likes of which would make Internet Explorer blush. One of the slowest, most cumbersome things on a PC I've ever clicked through. Growth without respect to planning, it seems. Runs better on the worst browsers than on the actual client.

A real poster boy for the Windows PC.

"Gaming is coming to Linux" is something I have heard people say for like 10 years minimum. Never happens. Turns out nobody wants to learn how to use command lines to do stuff. Nobody wants to learn how to use open source programs with lesser features either. Dual boot? Install a Windows VM? Just use Windows. For what it's worth, Windows has become much less obnoxious with updates too.

The only handheld gaming device I would consider buying is a switch. There are more games available for MacOS and I already own a Mac so why get a handheld thing that will play fewer games?

A switch is also cool since you can play with multiple people in real life with the detachable controllers. Actually cool if a lady takes one out of her purse to play with. Somebody using a steam deck to play cyberpunk in public is just weird.