A woman can still blame the patriarchy if she's fondled by her boss or paid less than a male co-worker for literally doing the same job though, right? Told her skirt or shorts should be a half-an-inch longer so men aren't tempted to rape her? "Smile more," advice men don't get as often (although they get their own kind of stuff). Being appraised for your looks and your ass rather than for your job performance.

Speaking of work-related creepery, my former CFO would only hire women into his team. 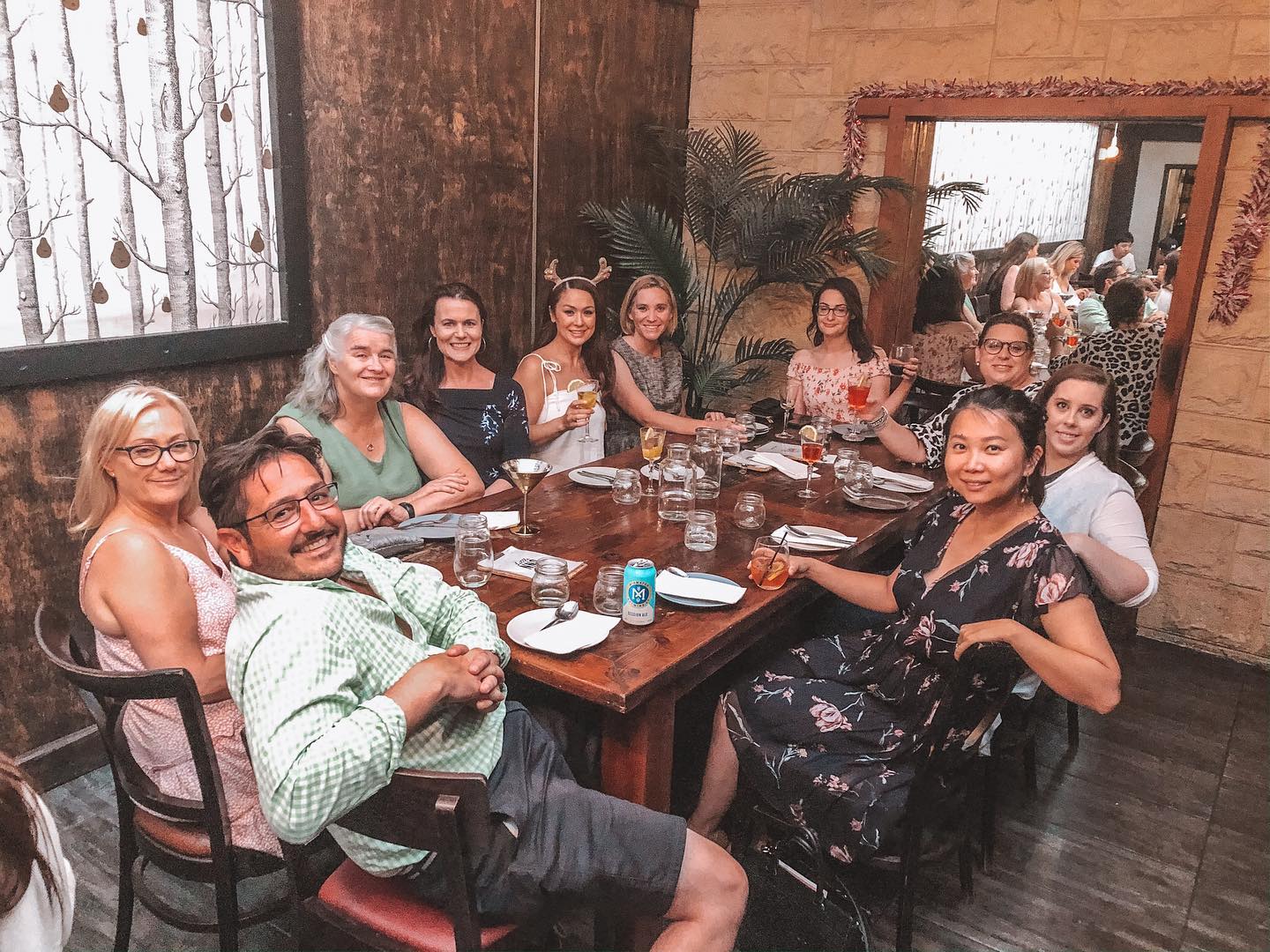 Wouldn't be at all surprised if he has a boner in a restaurant
Русский военный корабль, иди на хуй!

Women are just as bad, there was an obese woman manager there for a while, she would only hire women twice as obese as her.
Русский военный корабль, иди на хуй!

While we're on that, body insecurity is kind of one of the tools as well, though she's responsible for bringing it into the workplace.

An aside, telling someone they're gross/disgusting and less than human is not a good way to motivate someone with maybe comfort eating issues to lose weight. I guess some people don't care about improving health so much as getting out that jab on social media.

It's funny that there's always someone bringing up that "women do it too," or blacks/Asians can also be bigoted, etc.

Issues that do not dissolve the topic, i.e. male dominance in fields and pay with no good reason. Plenty of creepy criteria from male employers. Other suppression tactics. Race/gender issues in some western countries being separate their own things address not hinging on the outcome of social issues in India.

"Had a woman manager who was soooo body insecure she'd only ever hire fatter women" sounds pretty condemning of the culture who was a part of getting her there.

Speaking of work-related creepery, my former CFO would only hire women into his team.

Did the hiring only women thing ever work for him? Did they ever MeToo the guy?

Girls are more compliant by the way. Literally says so in textbooks.

those aren't girls. they are middle or late-middle aged women. and none of them look hot, or even possibly unmarried. 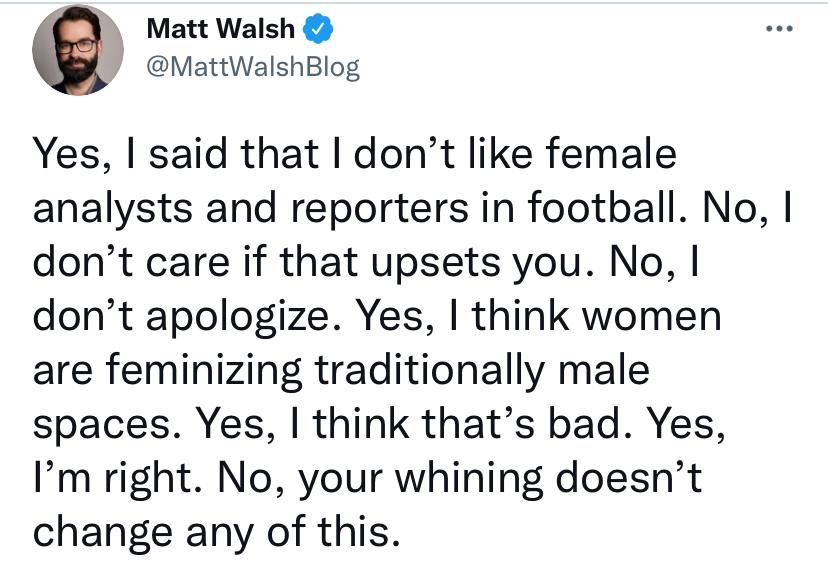 This dude is an incel. No matter how much he will argue otherwise, nobody who isn't a mentally ill incel would be put their IRL name to this.

I think it is pretty weird for guys to not like girls in their male spaces. Like, why wouldn't you want to be around girls? YGoS?

Man spouts nonsense into the void. Someone hears it and amplifies it. And now here we are.

I don't get why women getting into sports is a bad thing. I always thought it would make a game day a lot less awkward if your wife/girlfriend/some-of-your-guests actually enjoyed the game and weren't just pretending.

But I don't think he's blindly dying on a hill or anything. I think he's trying to widen his listenership. Via yent:

He added that he blames transgender people for the invasion of women’s “spaces,” as well, and continued to tweet pretty sarcastically Wednesday after his name began trending on the microblogging platform.

There it is. Pandering to a very specific audience. Very Limbaugh.

Gets a bunch of sports reporters talking about him too.

Most 'sports' are an excuse for blokes to hang out in a blokezone, most are there to eat and drink and the game is secondary except as a conversation point.

Not sure why all this needs to be broken up in the name of 'progress'.
Русский военный корабль, иди на хуй!

yes, yes, racism is innate and women can't possibly like sports. women surely don't like to eat, drink and converse together, either.

just look at cats! it's practically set in stone! Nature!

Have you even been to a sports game?
Русский военный корабль, иди на хуй!

i enjoy tennis and other such sports without boorishness and tribalism, yes.

is it 'innate' to want to bash someone over the head because you arbitrarily selected a team/jersey as a child? i've always wanted to ask an evolutionary psychologist! perhaps you can tie the sociology of football games to the behaviour of ant colonies.

besides, isn't the implication of your jibe that men can choose not to like sports? and thereby cancel your arguments for 'natural' group-gender behaviour? if so, why can't women choose to like them? wowsers! wrap your head around that one!

Why do people care about sports then?

Depending on city and venue, having a good team can sort of matter for the local economy. Not enough to go on a drunken rampage throughout town if you win or lose, though.

My town's big attraction is having a bunch of nearby golf courses within easy driving distance. Sometimes there's events. Traffic is not backed up three highways to get to them.

Why do people care about sports then?

Does it really matter if Wigan Wanderers win lose or draw against Neasden United?

there are plenty of explanations for why people enjoy sports, or games.

the psychology of game-playing is well established; play is a key part of childhood, imagination, and the developing brain.

justifying human behaviours based on 'evolutionary psychology', and likening our play to badgers or dogs, however, is where it gets seriously spurious. you seem to like justifying things 'because cats', as if 350 million years of evolutionary branching means we have residual 'cat layers' in our brain. it's fucking dumb.

there's a bunch of other sociological reasons for sports, or more specifically large spectator sports, and their popularity. spectacle in-itself a worthy object of study, with sociopolitical implications (and plenty of critiques, such as in distraction or mollification; 'opiates of the masses' and so on).

none of this you're very interested in. you just want to make vague sweeping statements that, apparently, let you justify first racial and now gender segregation. i guess keeping brown people out of your country wasn't enough: now you want to consign women to their parlour rooms whilst the men retire to the 'billiards' room to discuss sports and smoke cigars. all in the name of some putative 'Nature'. you're a sad, strange little man.

Depending on city and venue, having a good team can sort of matter for the local economy. Not enough to go on a drunken rampage throughout town if you win or lose, though.

My town's big attraction is having a bunch of nearby golf courses within easy driving distance. Sometimes there's events. Traffic is not backed up three highways to get to them.

golf, and golf course maintenance (like the american pastime of lawn care), should be classed as ecological crimes. the water consumption is astronomical. it's even worse when the golf courses are in deserts or on volcanic islands.

not to mention the tens of thousands of usable acres that could be set aside for a socially useful (if still ecologically destructive) use like affordable housing.

Well look what happened to the empire when we stopped doing that.

golf, and golf course maintenance (like the american pastime of lawn care), should be classed as ecological crimes

You really don't want anyone else to have any enjoyment in life do you?
Русский военный корабль, иди на хуй!

for someone who chagrins people for doing, well, literally everything, i think that's a bit rich.

don't you 'bah humbug' anyone who takes a plane for tourism? but you're sanguine about ... golf courses?! are you kidding? LMAO.

and aren't you against 'clubbable' types and elitist snobs, etc, sealing themselves away in bastions of privilege, normally always at the expense of everything and everyone else? LOL.

In the UK, twice as much land is given for golf than it is for housing.

In the US alone, over two billion gallons of water is used every day to irrigate golf courses. There have also been studies on the high levels of toxicity that effect the local residents and environments that surround courses, due to the heavy pesticides used to maintain them (so much so that some argue it is deadly). Even the very construction of a golf course involves materials that have a negative environmental impact.

bearing in mind that golf originally was played in areas of biodiverse wild grassland, in scotland, there's a special sort of insanity about introducing hundreds of millions of acres of perfectly sculpted, monocultural, blindingly green grassland to, er, the nevada desert. it's completely barmy – a lot of golf courses go as far as to introduce scots pines trees for that 'authentic' look. scots pines ... in florida.

In Las Vegas, golf courses accounted for 28 of the top 100 water consumers in a 2003 survey. As freshwater in desert areas becomes more and more scarce and wildfires seem to wreak more and more havoc every year, it can be hard to defend the high water demands of golf courses.

why is it that you're so fanatical about causes one minute, but then flippant the next? you're very selective, aren't you? one minute a committed eco-warrior, making tough lifestyle cutbacks for the sake of the planet, extolling the virtues of your magnanimous conscience, etc, etc; then the next you're saying 'let the little country club golfers have their pesticide-soaked, water-guzzling expanses to knock balls around'.

so can people get on planes to go see their loved ones or not? i thought you were against all forms of 'selfish human behaviour' and people 'fancying lolling around on a beach'. but hugely environmentally destructive golf courses are ok? hahaha make some FUCKING sense for once in your life.

I do agree that golf courses are water-wasteful and often ecologically unsound. Also wasteful are community and city rulings about letting your grass get too brown in the summer. Or letting Nestle vamp on California's water supply.

Also however many tens of thousands of cars idling fumes in a massive traffic jam because of the big game, or even a normal day on the highway. The slow march into EV while governments figure out how to tax them for road upkeep and publications combat EV misinformation. Having only one, big car because you sometimes need capacity, and a second smaller one for a more efficient runabout is just more licensing, tabs, insurance (some of my business trips are like driving across the length of England, twice. No, I'm not taking the bus).

Throwing away like 30% of the food you buy because you cannot organize your pantry and it goes bad.

Writing legislation against relatively uncommon classes of personal computers while business infrastructure is lit up like the 4th of July every night of the year.

I brought it up golf courses because I live pretty close to a cluster of the things, although not all of them are the immaculately manicured crème de la crème. I have a very rough idea of how to grip a golf club, but my grandpa taught me and for all I know it changed several times. I wouldn't mind playing more minigolf again or hanging out at a driving range, but unnecessary stuff in the middle of COVID.

As a plus, Washington gets a lot of rain. We're not exactly Arizona up here.

It is a little gay to play your rich people sport on perfectly manicured grass. Go out and reclaim the Wildlands with your clubs you cowards.

Calling things gay is definitely a pig man trait. Give everyone a +1 and say a Hail Mary for penance.