the reason china has more influence on the WHO is because of the US pulling out. lol.

Also, Droo, the WHO "flip-flopped" on some things not because they're malicious or acting against the common good, but because they just didn't know. In the early days of COVID-19 there was a massive amount of disinformation, misinformation, and not yet verified small-scale studies. I think the WHO actually did well in recognizing the issues with their advice and correcting it.
The shape of an eye in front of the ocean, digging for stones and throwing them against its window pane. Take it down dreamer, take it down deep. - Other Families

WASHINGTON — More than a dozen sailors from the aircraft carrier Theodore Roosevelt have tested positive for COVID-19 after they were believed to have recovered, which medical experts say shows how much remains unknown about the virus that causes the disease.

How are you guys still doing in terms of social distancing? I am fighting the urge to go to the supermarket just because I am bored.

trump is playing golf as the death toll nears 100,000. after spending a career berating obama for playing golf during moments of crisis.

boris johnson's top advisor has been caught breaking the lockdown rules, not once but twice. totally unrepentant. after senior scientists were made to resign.

bolsonaro is facing a crisis as a tape has been leaked that shows the inside of a council meeting, in which they discuss various paranoid conspiracy theories and basically talk as if they're shit-scared of being found out.

living in some very weird times. this global populist right thing is really working out well, isn't it? none of these governments give a flying fuck.

I generally see people paying attention to it here and mostly following one-way aisles. Sometimes watching a shopper turn back down the aisle to avoid another shopper is sort of like watching a game of pacman.

I think it would be nice if the president spent more time golfing and less time tweeting and stuffing offices.

Famously, on the campaign trail in 2016 he told supporters: “I’m going to be working for you. I’m not going to have time to go play golf.”

Since taking office, though, Trump has played more than 200 times. He last teed off in Florida on 8 March, when the coronavirus outbreak was gathering pace.

Famously, on the campaign trail in 2016 he told supporters: “I’m going to be working for you. I’m not going to have time to go play golf.”

Since taking office, though, Trump has played more than 200 times. He last teed off in Florida on 8 March, when the coronavirus outbreak was gathering pace.

You know Trump supporters are just calling him a crying cuck coward, right?

it's just really weird that the most hard-hit country in the world is having to deal with instances of abuse and public shaming over wearing masks. you have all lost your fucking minds. you look as unhinged as bolsonaro.

We haven't lost our minds lately. It was obvious right wingers would act like this. 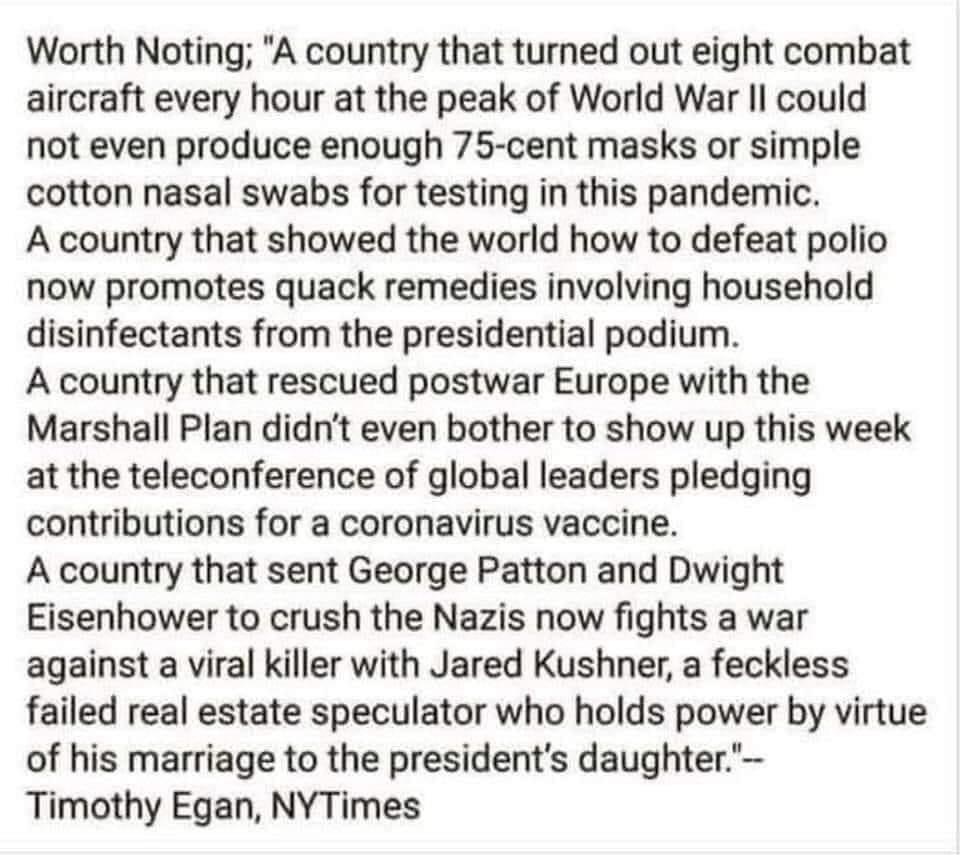 No one, however, would have predicted this news item from last week: “Covid-19 deaths in Sweden were the highest in Europe per capita in a rolling seven-day average between 12 and 19 May.” It confirmed that Sweden’s state epidemiologist Anders Tegnell’s “mitigation” strategy of allowing shops, restaurants, gyms, schools and workplaces to remain open was a deadly folly. It does not even seem to have produced herd immunity. Just 7.3% of Stockholm’s inhabitants had developed Covid-19 antibodies by the end of April.

hey jay. what was that about sweden again?

Recorded cases of Covid-19 follow a bell curve. All severely infected countries, including the UK, are seeing infections fall as they move down the far side of the curve, apart from Trump’s America and Sweden. In both instances, they have declined slightly then hit a plateau.

The Swedish sickness is a political as well as a medical disaster. Professor Johan Giesecke, an adviser to the Swedish government alongside Tegnell, became a star of the rightwing web as he lectured other governments on the futility of their tough measures. British Conservative commentators have boomed out claims that Sweden showed there was no need to close the UK economy. Sweden had “held its nerve”, they gushed, in much the same way communists once gushed about the Soviet Union. They praised Johnson for holding his nerve for a few weeks while he let the virus run amok, but damned him as a “scaredy cat” and “pant-wetter” as he U-turned and locked Britain down. Don’t be too quick to scoff at pundits who never made it out of the prep-school playground. They may talk like prepubescents but their readers are running and wrecking the country.

it's funny how quick you've acquired their rhetoric, isn't it? and you accuse other people of being 'uncreative followers'?

how many times have we heard you go on about 'womanly' behaviour, 'emotionalism', 'cowardice', etc. lately? weird how you've been quiet in this thread since your manly right-wing pundits have started to be badly foiled by the actual data.

i think a lot of ppl just have mistrust because the WHO and others flip flopped on shit. like early on they were saying the virus was only transmitted from animals to humans or something and then that masks didn't do anything and to save them for medical workers (why would they wear them if they didnt work tho?). maybe they just lied about the mask thing for the greater good at first to make sure the medical workers had a good supply. i don't know but lying in general is not good.

This whole 'flip-flop' thing is retarded, morons don't understand anything.

"First you said we didn't need to wear masks, now you're saying we do? You flip-flopped so I'm going to ignore everything you say now."
Epstein didn't kill himself

how many times have we heard you go on about 'womanly' behaviour, 'emotionalism', 'cowardice', etc. lately? weird how you've been quiet in this thread since your manly right-wing pundits have started to be badly foiled by the actual data.

How many pages in this thread are taken up by Jay shrugging off actual data, though? Not counting the ones where he cussed us out, called himself the only reason for it progressing past page two, and vowed to never return.

Data is for pussies.

Just formulate a view based on the manly way of doing it and stick with it like a real man.

Only women re-evaluate and revise.
Epstein didn't kill himself

In other news my state has had no community transmission for a month, maybe two. 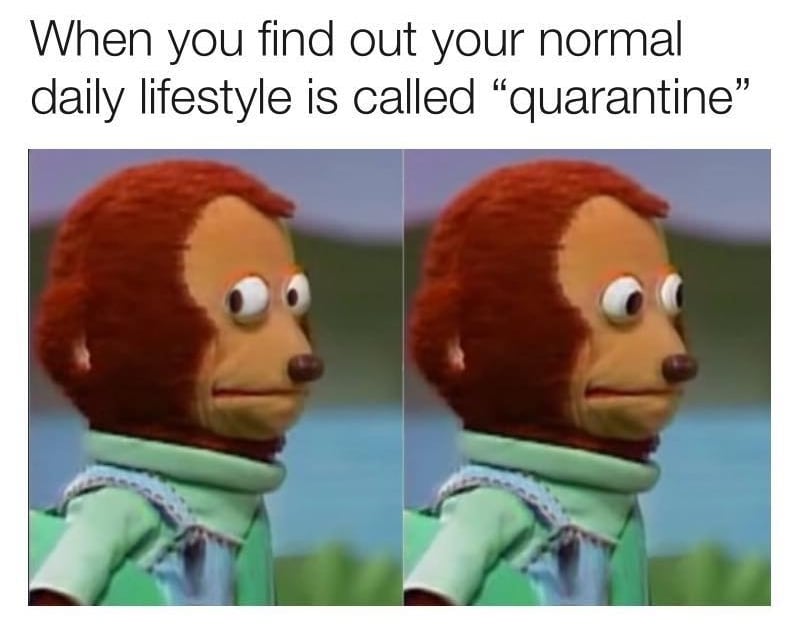 Data is for pussies.

Just formulate a view based on the manly way of doing it and stick with it like a real man.

Only women re-evaluate and revise.

"Gosh darnit, America didn't send a man to the moon with a bunch of effeminate formulas and input from hand-wringing rocket scientists!"

"Exactly, we gave the problem to Grampa Joe, he squinted at the horizon awhile, went into his barn and a week later rolled out a Saturn V rocket.

Thats how things got done in them days when men were running things. Maths is for girls anyways"
Epstein didn't kill himself

the irony is that whilst jay is here tabulating the world into masculine and feminine things, like a french grammar teacher after too much cognac, he’s probably wearing that hideous fleece that makes his head look like a giant crying baby emerging from a split vagina.

New York Times put together a visualization of the 100,000 people who died with very brief lines about who some of them were. Quite a few people in their 40's and 50's. I even saw a 28 year old. Stopped following at the 20,000ish mark.

The significance of this project is that a lot of these people are not going to be mourned and remembered. There will be no national day of remembrance. The economy and the ability of middle class Americans to consume fast food and junk will be the only thing mourned.

And all of those lives were lost to satisfy the ego of this man and his godless supporters. 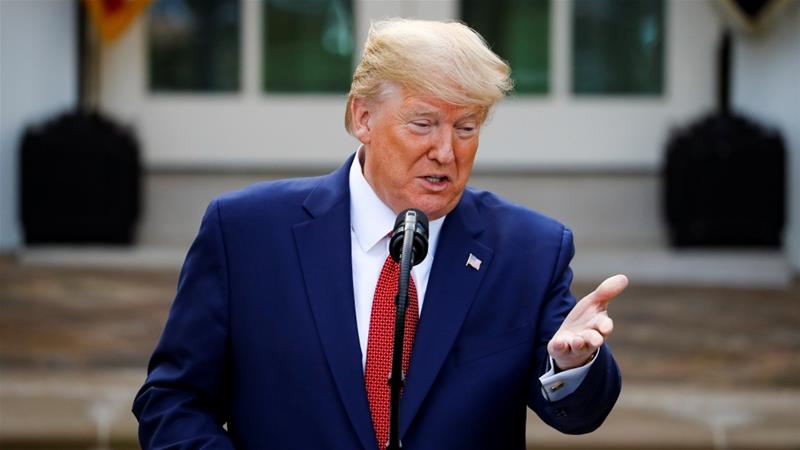 How does that make you feel?

I feel like the president is a symptom and that the country's issues won't evaporate when he's out of office.

I feel like the president is a symptom and that the country's issues won't evaporate when he's out of office.

You ever heard of the parable of the scorpion and the frog? It's almost unfair to get angry at Trump for being a vicious fuck up when we all knew up front that he would be. He does have a charming belligerence to him that Biden has too.

Want a feel bad moment? No matters what happens between 2020 to 2024, Republican voters will line up to vote for the next tough talking fuck up for president. They will pretend they never voted for or liked Trump like they buried Bush, McCain, and Romney. This cycle will repeat for the rest of your life at least.

Some of those Republican voters are honestly preferable to the ones who say they voted for Hillary then spent the next four years rooting for Trump's humiliating antics as great entertainment.

treating politics as entertainment is just as much of a general malaise as treating party politics as a spectator sport. you can probably thank the media for reducing politicians to the same level as celebrities.