Jay, you have a Jewish personality.

Yeah?
"Ah, you miserable creatures! You who think that you are so great! You who judge humanity to be so small! You who wish to reform everything! Why don't you reform yourselves? That task would be sufficient enough."
-Frederick Bastiat 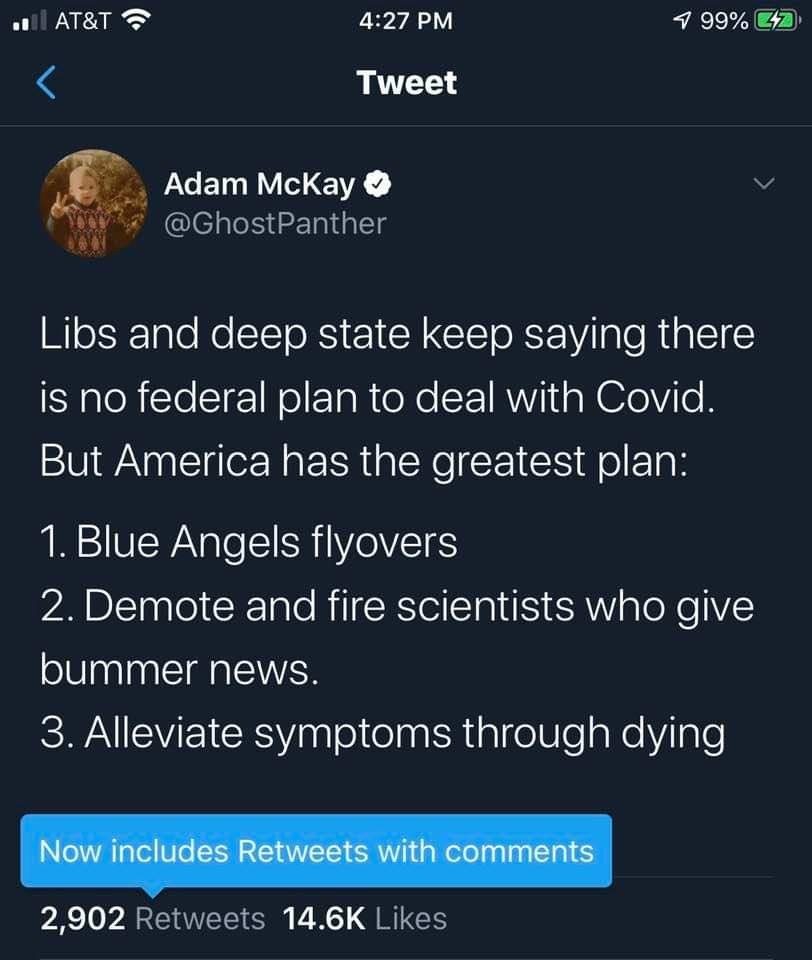 Flew over Chicago recently. Got some good mileage out of this.

so good for the hasidim too, right? for also ignoring the best scientific guidance?

or is going for a beer at a bar more important than going to your place of worship?

You pick some funny battles. You're defending a politically powerful, yet universally reviled segment of the New York City population. No one likes them uzi. My Jewish friends despise them because they make other jews look bad. Our last race riot was caused by one of them running over a black teenager and trying to cover it up. What point are you even trying to make?

who cares? i’m asking you why your views make no fucking sense.

you can’t dismiss all scientific advice, ridicule experts, flout the rules, lambast everyone here for being ‘cowards’ and ‘wrong and afraid to backtrack’ ... and then unload on the hasidim for behaving exactly as you recommend.

everything you just said is irrelevant. i am not a NYC public defender in a case for a hasidim hit and run. i literally do not care. i am asking you to make sense in your own views. you look a little bit contrary over there.

is breaking lockdown good? independent?
or is it willingly endangering the community? reckless?

when people go to bars it’s good. for pissing off the mayor, owning the libtards, etc.
when hasidim ignore the public health guidance, you wring your hands and tut tut.

you do know that viruses are completely blind, right? and don’t play your asinine games of blogosphere political argument? the end result is exactly the same. either that sort of behaviour endangers the health of the community, or it doesn’t. i can't exactly say that i understand dilbert's bizarre fixations and peeves, but at least his thinking on this matter joins up: he's all on-side for public health and good science, and the religious only anger him doubly so. you, however, make no sense.

make up your fucking mind. it’s not difficult.

meanwhile dilbert is so determined to heap the lion’s share of the blame on the jews that he’s condoning armed militias storming capitol buildings, and siding with the republicans who went around coughing on people on purpose.

Nope, never said that at all.

However between legitimate protest, even if you don't like it and I don't, and an entire community ignoring the law and spreading disease who is anti-social?

Having a community which has zero interest in being part of or contributing to the wider community is bad for many reasons.

But yeah, people 'thumbing their noses at de Blasio' and cultists choosing to live as if they're in a medieval commune in a 21st century city are not really much different. The cultists are inbred and ignorant, what excuse do other New Yorkers have?

If its Muslims slaughtering goats in the street, Chinese keeping chickens in their apartments or Hasidim trusting group chanting to defeat a virus this backward behaviour needs to stop in the modern world.

People shouldn't get special treatment, we should stop tolerating stupidity or backwardness in the name of 'diversity' or whatever the word is today or pandering to religious nuts.
Idiots and fanatics don't have a right to fuck things up for the rest of us, or we will end up in an idiocracy.

nice to see we agree and scorn should not be reserved exclusively for the orthodox-religious.

It's a Democrat conspiracy you guys, and the world is in on it.

yOu KnOw iTs thE tRutH
Epstein didn't kill himself

100 million are back under lockdown in china, due to new clusters. same with korea, which shut down its recently re-opened nightlife hubs.

this is going to be the new normal for the foreseeable.

At least its the end of spitting in sport.

And finally the world has woken up to the knowledge that China is not part of the global community and never has been.
Epstein didn't kill himself

the rest of the world encouraged china to join the global community, and has taken advantage of the economic asymmetry for a good portion of the 20th century.

australia is the most vociferous actor in this 'world vs china' thing. i'm not sure what sort of local regional grandstanding and economic co-dependency there is going on there, but the rest of the world doesn't share the appetite for total rejection of china. a formal enquiry into the origins of covid, yes, certainly, that seems only prudent considering the ginormous costs. but to make china a global pariah? fat chance. 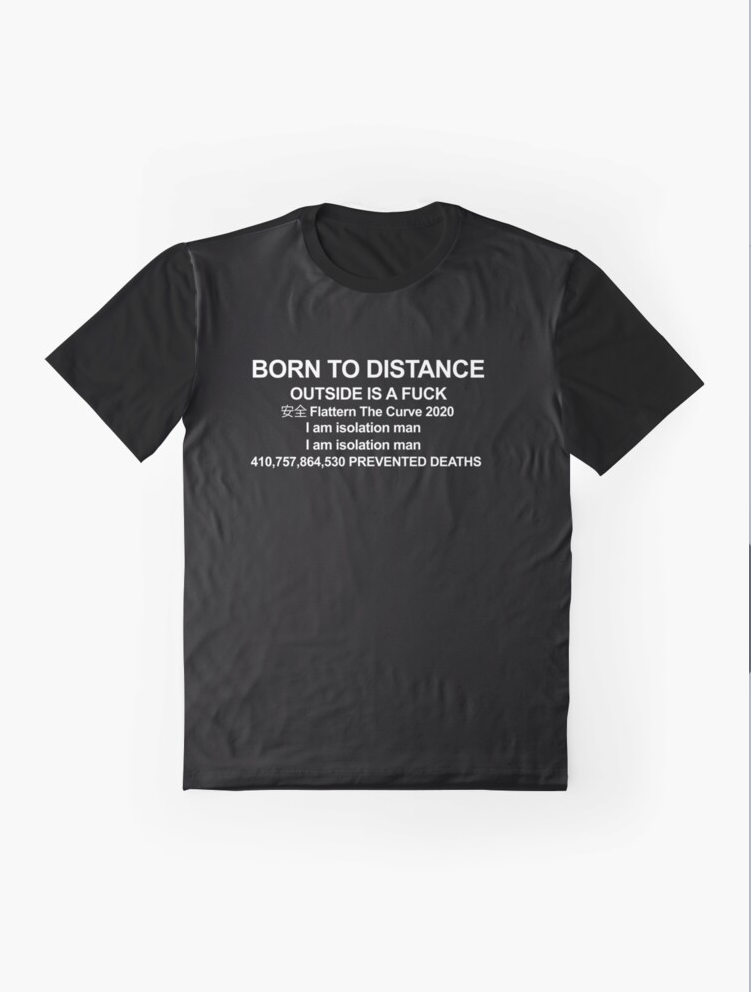 here are some more graphs, from the british office for national statistics.

seeing as jay, our resident statistician and modelling guru, likes data. he should enjoy these. they've labelled the axes this time and everything, so we can avoid the confusion (understandable) caused by the 'flattening the peak' graphs. 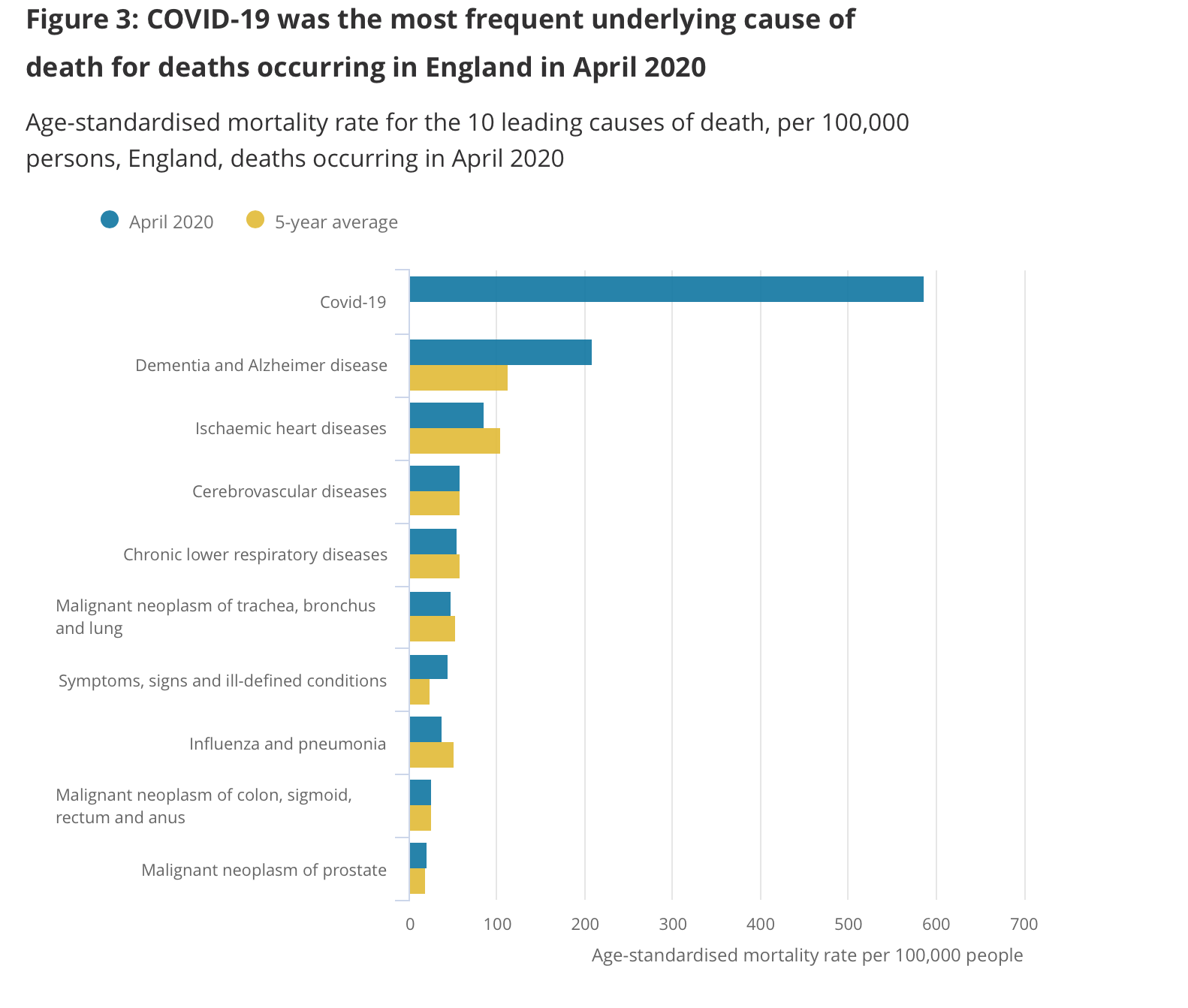 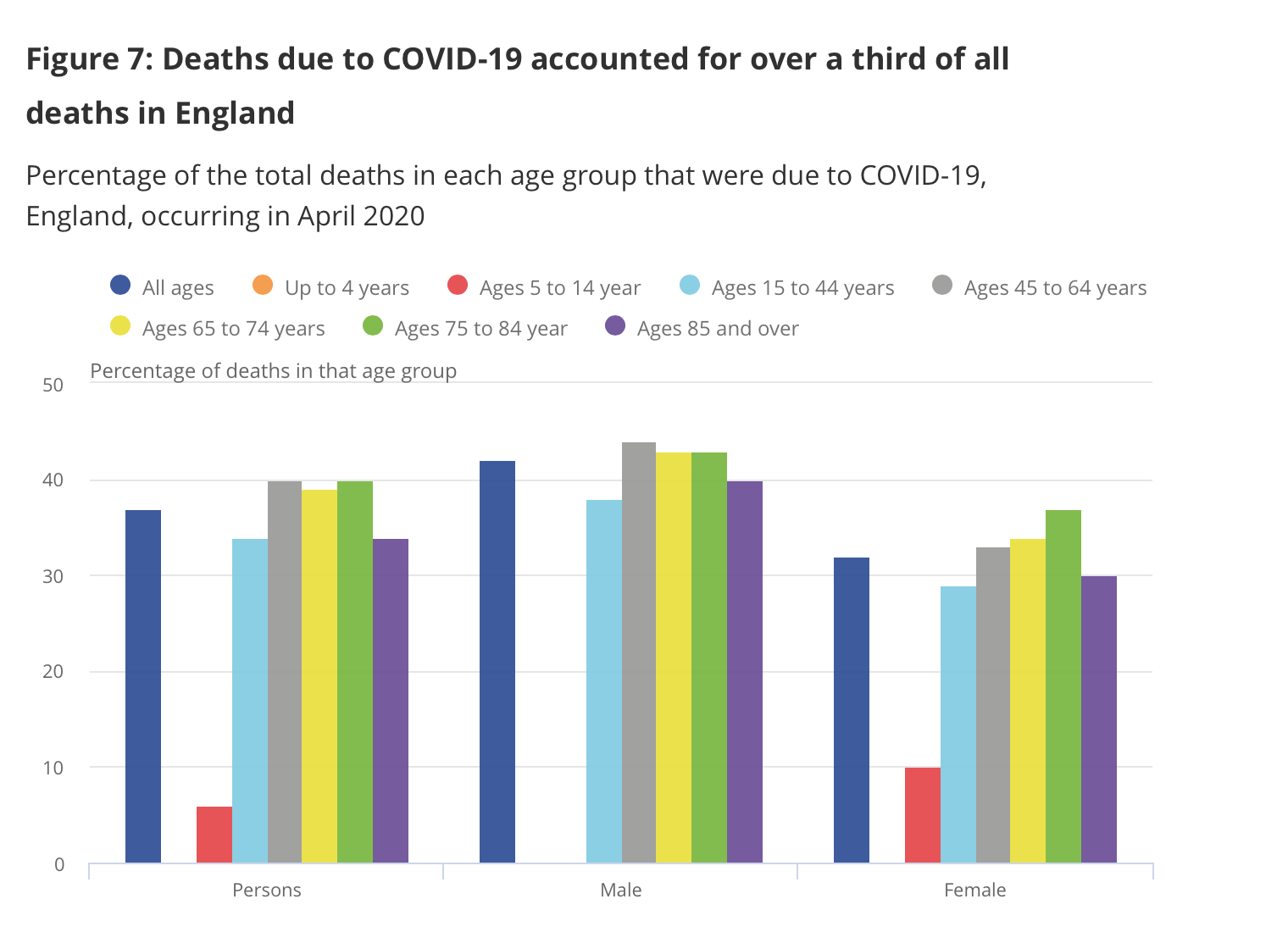 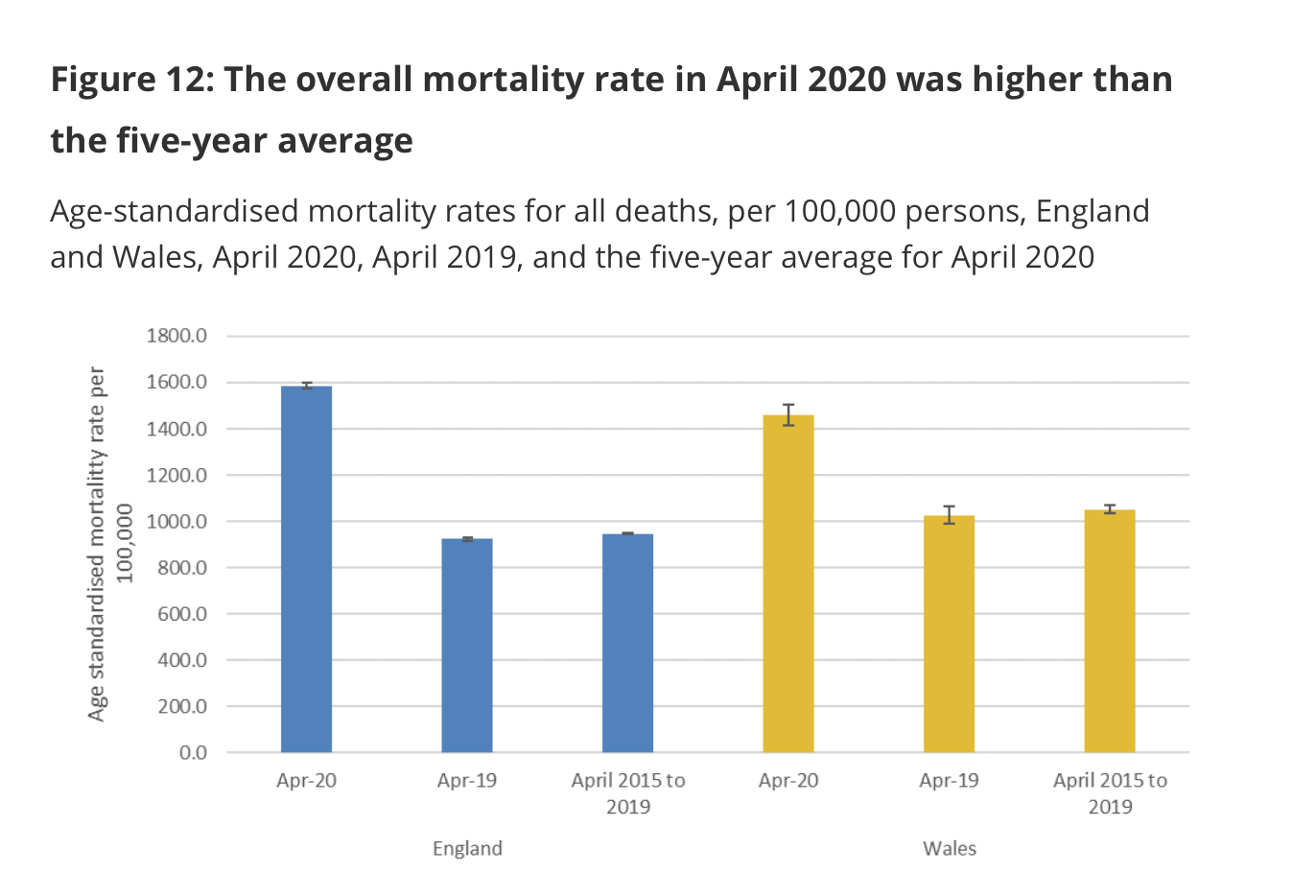 remember, it's just as deadly as swine flu!!!

who wants to take bets that trump won't stop taking hydroxychloroquine? because he's afraid to back down and look stupid/weak/indecisive?

I don't think he is actually taking it. I think he just lied about it in hopes it convinces people he is right.

Jay, do you plan to go to a restaurant if they reopen soon?

I have antibodies already, so why not?
"Ah, you miserable creatures! You who think that you are so great! You who judge humanity to be so small! You who wish to reform everything! Why don't you reform yourselves? That task would be sufficient enough."
-Frederick Bastiat

I forgot all about. What a bizarre situation.

the rest of the world encouraged china to join the global community, and has taken advantage of the economic asymmetry for a good portion of the 20th century.

australia is the most vociferous actor in this 'world vs china' thing. i'm not sure what sort of local regional grandstanding and economic co-dependency there is going on there, but the rest of the world doesn't share the appetite for total rejection of china. a formal enquiry into the origins of covid, yes, certainly, that seems only prudent considering the ginormous costs. but to make china a global pariah? fat chance.

You consistently underestimate the views, will and the effect of the average person, Brexit, Trump's election, Johnson's election, you're regularly wrong.

The average person is not going to forget this, they'll certainly remember the lost money and hardship.
Even without ill-will to China they're facing 10-20-30% reduction in GDP
With ill-will it could be 50%.

Is the average person anywhere in the world going to buy Chinese if they can avoid it?
Is anyone going to want to be seen in a Chinese car or with a Huawei phone?

You may dare to hope the discovery of antibodies in your blood means you will be immune to the virus in the future — you won't ever get it again or give it to anyone else.

In today's reality, testing positive for antibodies to Covid-19 means nothing of the sort. In fact, it may not mean much at all — at least right now.

There are still too many unknowns, both about the accuracy of the antibody tests that are available and about the nature of the virus itself.

"It is clear that we're still not where we need to be. It's a brutal truth, but one that needs to be told," said CNN Chief Medical Correspondent Dr. Sanjay Gupta in the May 5 episode of his podcast, called "Coronavirus: Fact vs. Fiction."

"And this is exactly why I keep advising people to behave like you have the virus," Gupta said.

In addition, both antigen and rt-PCR tests can only give a "snapshot" of your status at that specific point in time. If you were exposed to Covid-19 the next day, you could easily become sick and not know it.

Its very likely that these rapidly developed tests are giving dubious results, I wouldn't trust them.
Epstein didn't kill himself

one of the main clinicians at the francis crick institute who is working on them says they are unreliable. jay dismissed him. the guy who invents the antibody tests.

meanwhile he’s going around as if he has an immunity force field. stupid is as stupid does.

dilbert, the average person isn’t in control of global manufacturing and supply chains. weren’t people widely dismissive of ‘made in china’ products in the 90s too? how did all that boycotting go?

i’m sure people will refuse to buy the new apple gadget en masse because of corona. time to buy stocks in, er, siemens.

The average person is in control of their buying habits, when my sisters hairdresser is talking about taking away China's manufacturing there's something going on.
Epstein didn't kill himself