We Americans are locked in political combat and focused on President Trump, but there is a cancer gnawing at the nation that predates Trump and is larger than him. Suicides are at their highest rate since World War II;  one child in seven is living with a parent suffering from substance abuse; a baby is born every 15 minutes after prenatal exposure to opioids; America is slipping as a great power.

We have deep structural problems that have been a half century in the making, under both political parties, and that are often transmitted from generation to generation. Only in America has life expectancy now fallen three years in a row, for the first time in a century, because of “deaths of despair.”

From: Who Killed the Knapp Family? https://nyti.ms/37Qan0A
Basically an article detailing how a rural Oregon family got wiped out over the course of a few decades by drug abuse and joblessness.

It would be in character for me to delight in them dropping dead but this is an issue that affects us all. I know many young liberals who lost their lives or struggle with substance abuse. They would have helped others if they could have helped themselves.

So what do we do to fix this?

Americans should be able to look after their own citizens, not using their resources to bring about the end-times in the middle-east.
It would have been more productive to pay Oregon hillbillies to burn bales of cash in their backyards than attack Afghanistan and Iraq.
But I think its disgusting that you're more concerned about people dying and babies suffering than jews making money - you anti-semite.

I'm more concerned about rhinos being killed by poachers, they can't look after themselves.
1,000 Rhinos are being killed every year so some chinaman or saudi can snort a powder in the hope it will make their tiny dicks hard.
Other animals too, pangolins etc.

100 Seals, or maybe 2 SAS, could deal with that pretty easily.

And if the chinese could be educated that their traditional medicine is fucking retarded the problem would go away.

Basically, we can create a thread on just about anything and dilbert would find a way to work Jews into it.

You know what this whole thing might be an interesting opportunity for me. Turns out my Wellbutrin can be shot into your arm for a cheap high for only $3.50. I get a 90 day supply for $15 or something. I don't know really.

Anyway I could sell a desperate addict just 6 of them for the low price $20, (a savings of $.50 vs street price). In fact I will throw in a 7th for free since it is important for people to think I am a good person. Maybe I will give someone 7 just for a sexual favor.

Gentleman there is a silver lining to this crisis.

You give them the first one free then charge $20 each.
#FreeBritney

I am teaching the opium war to my students. I explained to them that opium is an opioid like heroin that they hear about. It is interesting that at least one of these low achieving kids will get taken out by H.

Mac wanted my to post here so I will. It's more observations than stories.
I drive through farmland every day to get to work, 4 small towns to get to a small city. I see billboards for get help stop taking opioids, support more funding for police to get rid of opioids, and an abandoned trailer home with the insides gutted and thrown all over the yard which has been that way for months.


Office people aren't quite as crazy so this is mostly about the blue collar workers.
Work is 95% white and probably 75% smoke cigarettes.
Weed is huge if you're <40. Several people have been fired for smoking on break and one skipped work to go to a weed convention in Michigan.
We hire felons, the ones I know of still here are grateful that we do and don't mess it up by doing drugs on company property.
Only heard of one person come into work drunk but plenty drink every day, or most days, of the week.

Hookers and strip clubs get brought up without provocation. One person was busted for hiring a hermaphrodite, one talks about how they used to go to Windsor Canada and get some,  others used to spend all their money on hookers, another was happy to find out they could get happy endings from their massage parlor, and several talk about strip clubs.

Now hard drugs. I'm sure some here still use em but I don't know of any specifically. In the past we had 2 supervisors on opioids.
One was also doing someone from a different department in the bathroom and at her home even thought she was married and the husband knew. I think he bought her a car. He got fired but is back now a year later in a lower role seems to be doing ok.
The other got fired for not showing up cause he was too fucked up to come in. He got a second chance but lasted a week. Last I heard he moved south for a job couldn't get one and is now back in the area.
Another person was on meth, got fired, back a year later, fired for smoking weed on break.
There's been drug deals in the parking lot and probably inside. A bag of cocaine was found one day laying on the ground, handed over to police.
3 times now I've been here when the police come looking for some employee connected to drugs or a shooting.

That's all I remember atm.


Not related to work but a guy from high school became a hs teacher was caught having sex with student. Got 180 days in jail. Was brought back from an OD on coke I think after he got out. His gf, also from high school, who is a nurse still married him after all this happened.

Thank you for your contribution. Keep us updated.

I was going to punch down on blue collar workers but I remembered that there are a lot of ratchet teacher stories from my district. Like janitors catching married teachers closet screwing. Or teachers getting blow jobs from substitutes in their classroom.

I will say that it is equal parts amusing and frustrating when blue collar fuck ups punch down on other poor especially immigrant types. Like if America's economy was shot to shit, we know your asses would hide in shipping containers to reach Ireland.

By the way, Rick. Have you considered moving to a major city? You can roommate with Desert Fox in Chicago.

a simple question: what the hell have you done wrong in your life to end up working at this place? it sounds like you’re with the dregs of society, the reprobates.

First of all I wish my username was all lowercase now.

Second, I quit my job in a network operations center and friend is an engineer here. Pays well enough, much better than noc job. Do data collection/analysis/reporting cause their systems are circa 1988. Job is easy enough, enjoyable, I have an office, more time off, 18 v 10 days.

I wish it was in Cincinnati but it's not so I'm in a college town 40min away from Cincy and work. Dayton is closer and I stay there some but not as cheap.

oh sorry, i assumed they were your colleagues and you were doing the same job. as you were.

First of all I wish my username was all lowercase now.

Second, I quit my job in a network operations center and friend is an engineer here. Pays well enough, much better than noc job. Do data collection/analysis/reporting cause their systems are circa 1988. Job is easy enough, enjoyable, I have an office, more time off, 18 v 10 days.

I wish it was in Cincinnati but it's not so I'm in a college town 40min away from Cincy and work. Dayton is closer and I stay there some but not as cheap.

My friend runs a software development team for Liberty Mutual in Cincy. I can ask him if they have any openings...

I think it's liberty mutual?

There he goes looking for sexual favors again

it's weird that you immediately equate any extension of help as a two way transaction where sexual favors are being exchanged.

It's not weird. It's in character.

Nah I enjoy it here for now. They're getting ready to move us from 1988 to 1991. From AS400 to Movex. I'm supposed to be helping but who knows, this plant has been moving to Movex this year for 20 years.

@ziq It's fine I wasn't specific on my role, though plenty of the machine operators make a decent amount of money, some said they made an additional 10-15k through overtime in a year . They're still colleagues pretty much, get to spend 2-4hours a day on the floor usually.

I highly suggest you keep away from the blue collar guys. I don't want them to be a bad influence on you.

Most of em chain smoke and I can't stand the smell for too long no problem there.

The smell of smoke on a girl used to smell sexy to me. It lost that effect over the years.

smoke smells terrible on everyone

The trashed house I drive by every day 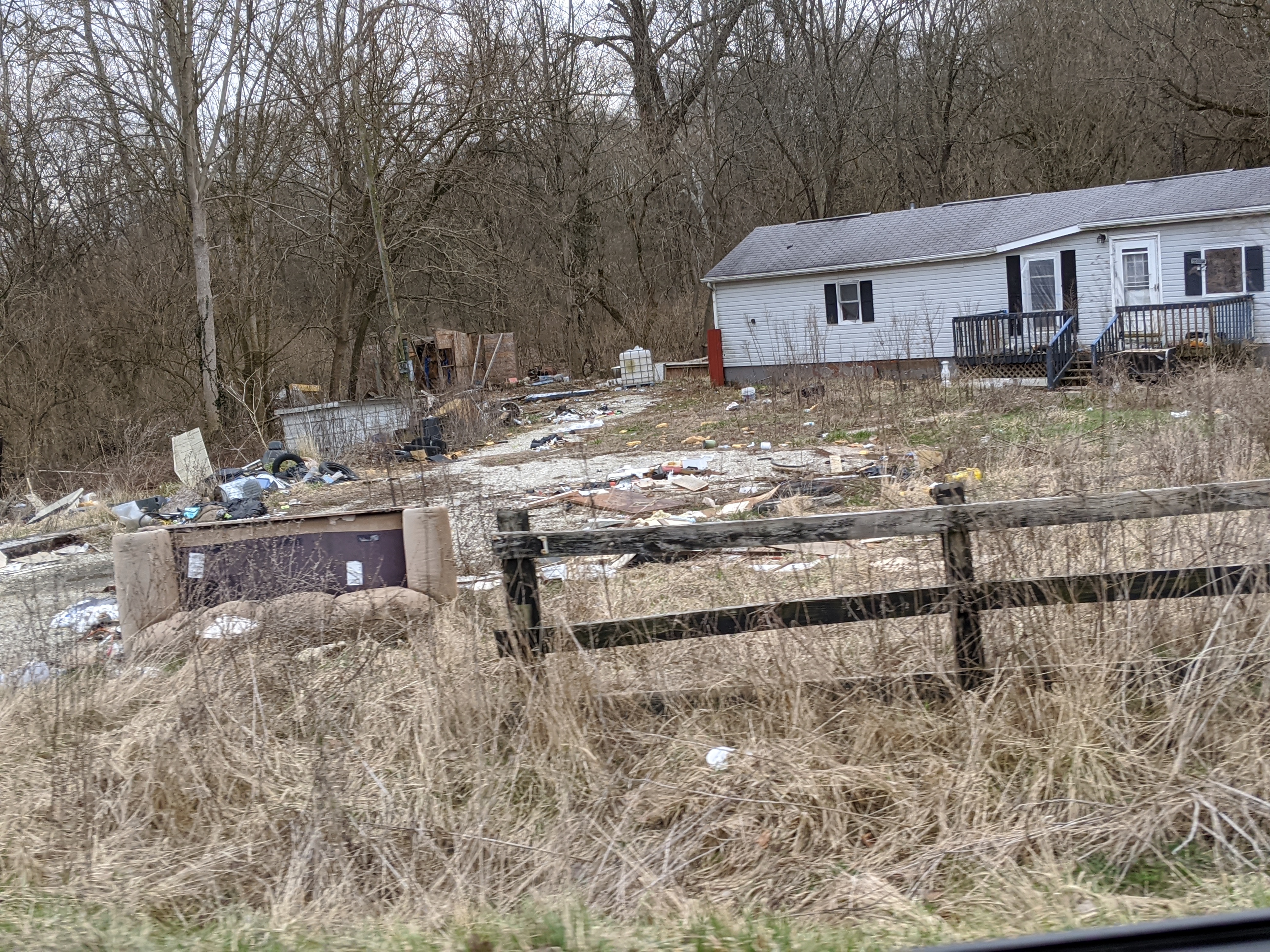 A farm put this out over the weekend 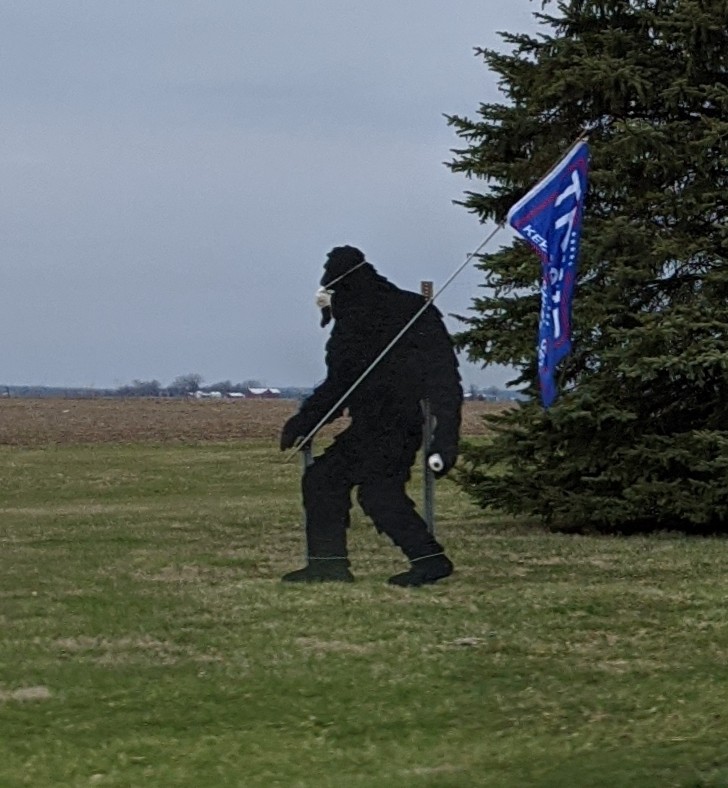 What do the blue collar workers think of the CORVID?

Still mostly joked about. Company put out their covid19 policy which included banning floor workers from the office so I don't see much of them

That's funny. Management really telling people where their place is. I think a lot of the CORVID reforms will stick around after this is done. My hometown took the hoops off of the basket ball courts so that people can't break isolation to play. I don't expect the city to put those back up.