I went to the MET last night. They had a cool exhibition for the Tudors.

ding ding. told ya it was a shitshow. i even pointed to the exact same street where it happened.

i posted a photo from a rooftop on friday night and said ‘fuck that’. the EXACT crossroads in that picture are where about 120 people died tonight. that was ground zero.

Just saw all the stuff in the other thread, but that's wild.

Halloween has been cancelled.

Uzique was on about it for childishness though, and had plans for attending another event. None of us predicted here that an offshoot of the crowd would meet their fate in an alleyway because people wanted a closer look at some anonymous celebrity.

The students in my first period are severely autistic. I have never seen them so happy as they were when I put on SpongeBob.

Why are you showing them SpongeBob in school?

Last day before fall break. I always show them something cool before breaks.

Another wrong prediction, mac. I have nothing against SpongeBob. The person who made it worked as an educator himself. Zero problems with schools having days where people just kick back every now and then. People aren't robots, and school sucks up some of the best days of your life with busywork. Automaton work ethic is overrated anyway.

I didn't know it was made by a teacher. It is pretty clever. I really appreciate how Nickelodeon was able to make shows that kids enjoy while also putting grown up inside jokes and references.

Like the episode where SpongeBob goes to Sandy's air dome and begins to die from lack of water. But he doesn't want to leave hanging out with Sandy even though it is literally killing him. It is a situation adults can relate to while the kids simply see a cartoon acting funny.

Accidentally cracked my phone screen when camping. 2 long but not bad ones. Dropped it yesterday and the 2 became many. Black Friday deals are only a week away.

Where did you go camping?

Which campground at GC?

Mather. Nice but the toilets are way too high. My feet didn't touch the ground

Accidentally cracked my phone screen when camping. 2 long but not bad ones. Dropped it yesterday and the 2 became many. Black Friday deals are only a week away.

Cracks on a phone screen give it character.

I wanted a new one anyway for more space. Hope it doesn't hurt the tradein too much lol. 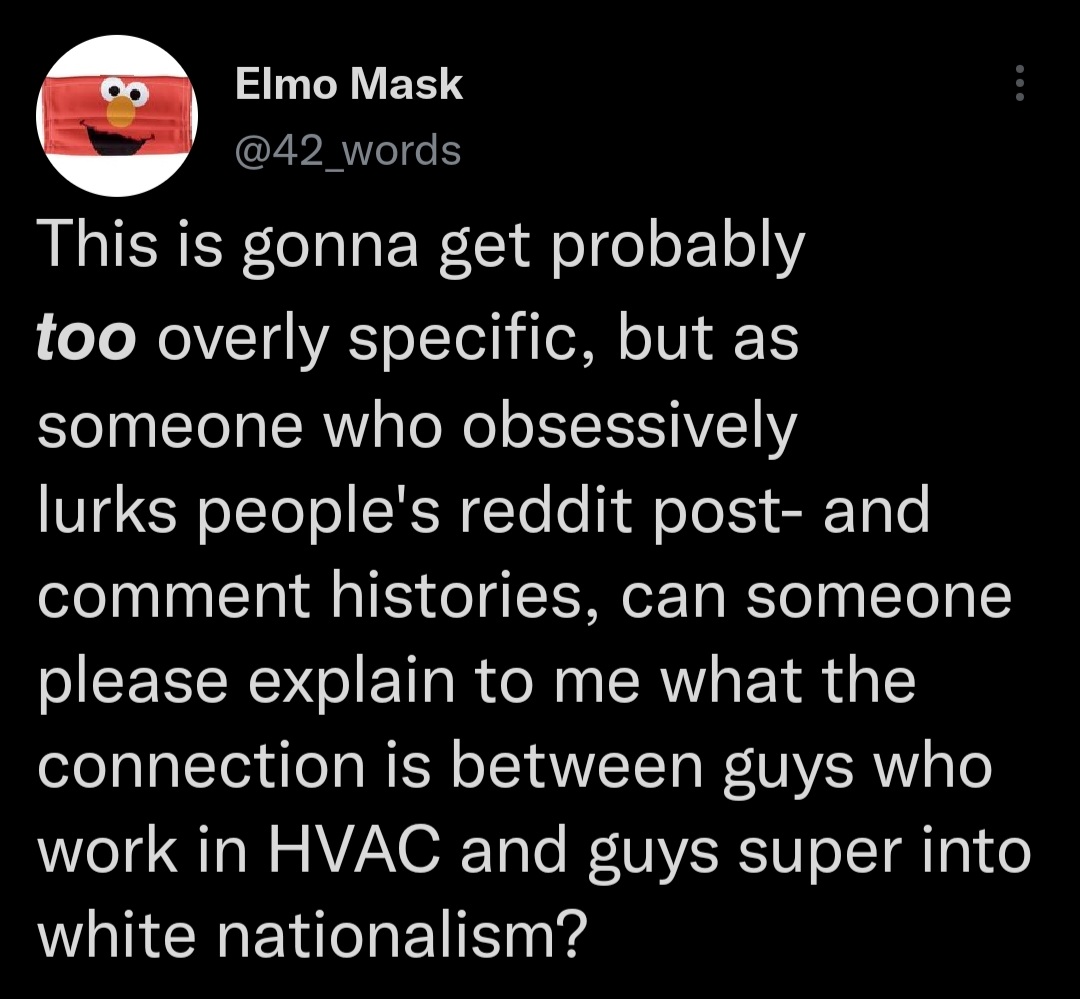 I posted this in the race thread. Dilbert used it as an opportunity to attack brown people.

highly demographically and psychologically specific white man assumes his views are ‘universal’ in first time in history shocker. we have never seen this one before.

ironically they use the term ethnocentrism but can’t apply it to their own intellectual framework and lazy concepts.

I have never had a teacher, in public or private school, start spitting white supremacy at the class. But I wasn't educated in the south. What made this guy think this was at all a good idea? Is he going to try and take it to court like the Washington cult leader coach?

Stumbled upon this and was reminded of that recent post here about real men and cars or whatever (anyway, you should drive stick, if y'know what I mean *wink wink*): 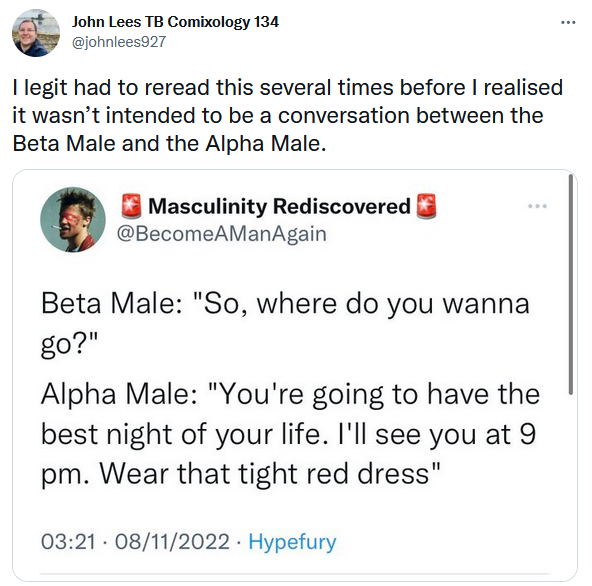 This whole alpha/beta nonsense needs to die, anyway. Hasn't it already been disproven as a wolf pack dynamic (e: linky)? Why does the manosphere use it for humans? In 2022?

afaik the actual scientist who came up with the alpha/beta theory for wolfpacks later had to modify his own ideas. he spent most of his career trying to do the best work possible in his own limited discipline ... whilst a bunch of sexually insecure maladapts took his ideas about wolves and applied them to human societies.

file next to 'evolutionary psychology', 'instinct', and just about every other cod idea misappropriated from scientific discourse by kooks and sociopaths to justify their diseased worldviews.

The way the class looked, older teacher sitting with the kids having a bullshit session, leads me to think this class has a lot of issues regarding kids not doing much work or behaving. So instead of assisting doing classwork or being at a PODIUM lecturing, the guy is literally sitting with them and chatting because they can't be trusted to sit on their own.

I think the guy should be encouraged to retire instead of being fired and having his certificate yanked. I don't like yanking people's licenses in general for any job. This is a protection I would give to police too. 'We can't ask people to put themselves in dangerous situations and then overly punish them for mistakes.' In the case the guy said something about 20 years out of date. He didn't hit a kid or sleep with one. He should find another job in education somewhere. Maybe they can reassign him as an after school tutor plus give him a written reprimand. That will be enough really.

The mismatch between the demographics of teachers vs the students they teach in America is extreme and worsening. An old white guy probably shouldn't be in front of a class of young minority children the same way I wouldn't make a black guy a kindergarten teacher in New Hampshire. It irks me when they put 22 year old white girl teachers in charge of ghetto high schools. It isn't good for anyone involved but the amount of people qualified to do that job is already a small selective group.