I think there's an inherent rightness to fans cherry picking, discarding, or overriding a series' canon with their own ideas when things get Game of Thronesed as often happens.

From what I'm hearing, this movie can be skipped or cliffsnotsed, like those story recap channels.

This post is going to be a mess but I wrote it in all different parts.

I would like to discuss this movie in more detail but Ken has yet to Discord me for my HBO Max account. I looked back over the movie a moment ago I was able to find exactly where it went wrong 56 minutes in.

Even the pleasurable sight of Michael Gandolfini as young Tony was never going to make up for the complete absence, in this film, of anything remotely reflective of the tone and color of The Sopranos.

It's almost heroic how little Chase cares about making a Sopranos movie, but it inevitably puts the film at cross-purposes, with the story it wants to tell getting strangled by the one it's obliged to.

Reduces characters of potentially mythic power to a handful of defining traits and pins them to a diorama-like backdrop of historical readymades.

Fuck it. I am going to write a spoiler review.

So the Sopranos TV show was about the Italian Mafia in NJ. The movie is like almost a third about previously never heard of black characters who start a conflict with the NJ mafia. The conflict is never resolved.

The movie starts off strong with Chris narrating the story from beyond the grave. Well aware that Tony killed him and all that. The movie introduces us to the main character of the movie, the charming and violent Richard Moltisanti, Chris' father and Tony's childhood idol. The movie starts to go haywire early on with the introduction of the black characters a few minutes in. Going back to what the WSJ said...the movie injects blacks characters into areas we are familiar with in the show. But instead of getting to see those areas in their glory days of the 60/70s, we instead get to see the black characters and white characters insult each other and have ethnic tension. This happens I think twice in the first 56 minutes and it is weird. Eventually the police victimize a black guy and the Newark race riots, a real event, takes place. We get to see what the riots were like which is interesting to watch but I am pretty sure I have seen looting before....

So the black guy that keeps mouthing off in the Sopranos family hangouts works for Dick. The black guy has to flee because he murders someone. Dick gives him $5000 and tells him to never come back to NJ again. The black guy is very resentful of the fact that he has to flee for a murder he did for Dick, for being mistreated by the Italians in their club (he wasn't being a good guest in my opinion), and for witnessing the race riots. At 56 minutes in, we get to see the black guy attend a Black Panthers meeting that radicalizes him. When he returns to NJ years later, he sees Dick and is resentful that Dick gave him a $100 bill while not getting out of his car to talk to him. Dick offers him a job but the guy declines. He then decides to go to war with the Sopranos crew. Okay, I can dig the premise. You got your antagonist, his motivations, etc.

So the black groups war becomes as big of a story element as whatever the Sopranos are up to at this point. Also Tony Sopranos, completely irrelevant to the story. That's a whole issue onto itself but the bigger issue is the movie is apparently about a race war. A bunch of yadda yadda happens. Eventually Dick is killed by Junior Soprano for some ridiculous reason that completely throws a bunch of the main series into question.

The last shot of the movie is the black antagonist moving into the suburbs and starring down his displeased white neighbors while the Sopranos theme song plays. I shit you not. I took a picture of it with my phone since HBO Max (cleverly) made it hard to grab images from their site.

The best explanation I have seen for this mess of a movie is that David Chase wanted to make a movie about the Newark race riots but HBO wouldn't let him so he had to put a bunch of Sopranos characters in it. The end result of this is that both the story of the riots and the Sopranos are now diminished. I don't ever want to hear about those riots ever again.


Finally, I read a reddit complaint about the movie that I wish I saved since it explains why many are so embittered now. It went something like

What I liked about the Sopranos is that it was the only show that was from the perspective of modern Italian-Americans. Now the Sopranos is about a race war between white and black people that had little to do with us.

Son, you can't make this shit up.

I read up until the spoilers. I already have an HBO Max account (watch 100 Foot Wave, it's pretty good!) but I appreciate the offer.

Still awaiting the Uzique and Ken reviews. You guys got time for Dune but can't watch the Sopranos?

Every indication here is that it's a hate-watch. Hard pass.

A lot of people enjoyed dragon show but elected to skip the last season. 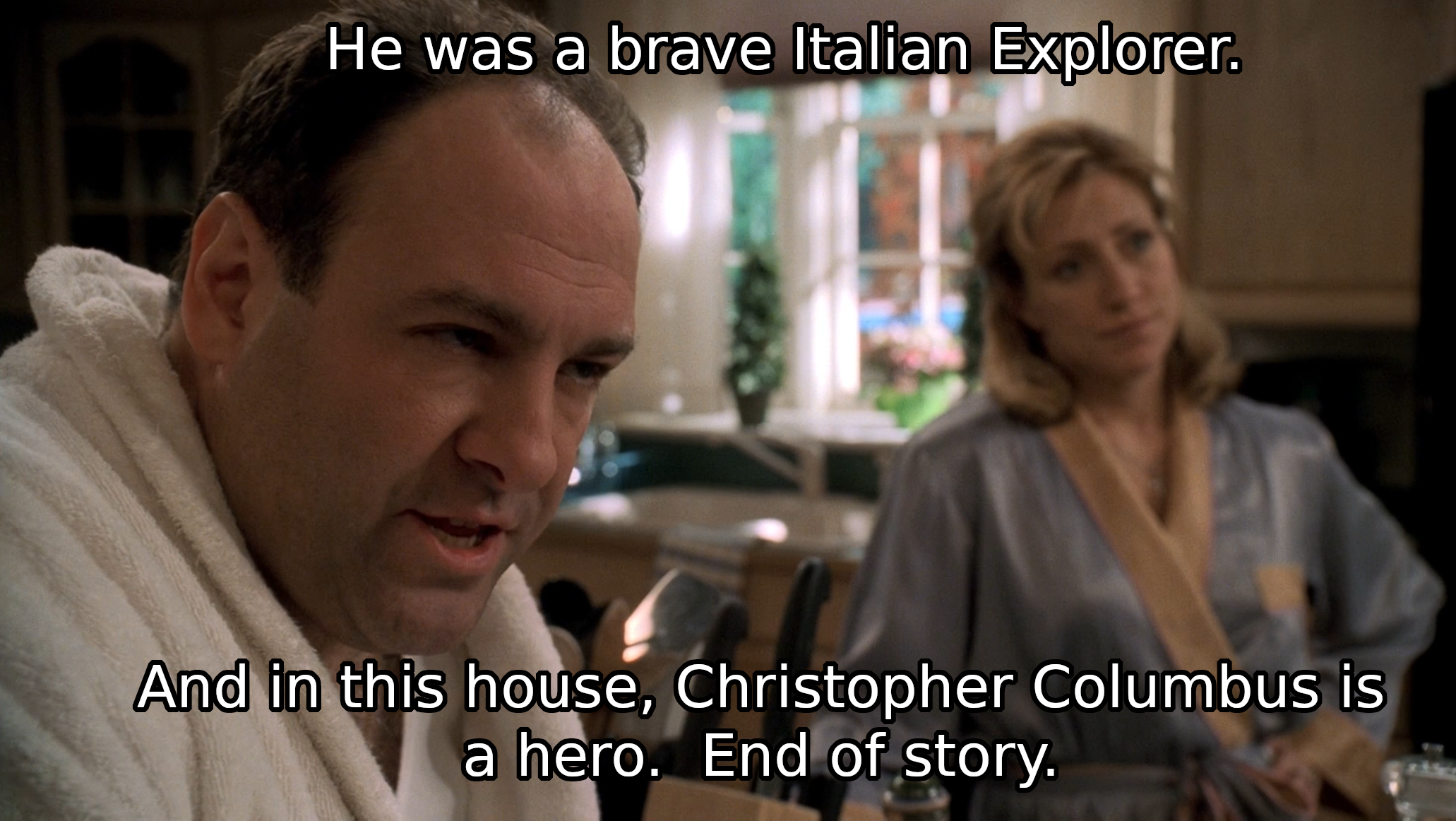 I quoted that yesterday when my friend told me I was starting my new job on Columbus Day.

your total lack of a sense of humour is tedious.

much of the show, and that line, is delivered as obvious comedy.

I still have to sit down and watch this thing start to finish, but I've seen my share of clips. Great scene:

"You sit there with your fuckin bowl ice cream and say it's your favorite scene of all time!"

You need to watch the show. Make us proud.

Turns out SNL did a bunch of these when Oz was on tv. I thought it was funny editing

Recently rewatched Oz and had the same feeling I did when I watched it 20 years ago. Always waiting for something profound to happen, but it never quite got there.

The spoilers can be an issue. The show is so talked about though that if I'd wanted to watch it spoiler-free, I'd have watched it when it was coming out. Nobody but myself to blame. Still, I'm unaware enough of cohesive plot details that I suppose it could still seem fresh.

I might decide to watch a show based on clips alone, if I enjoyed them. Watching clips, no expectation for everything (or anything) to make sense. Disorientation-free.

It's on Netflix, right? Need to grab the Netflix password from family I share Prime with again. Sopranos costs money on Prime.

Sopranos cost money on Prime? I remember it being included for free.

Just pirate it. Didn't bf2s have a rule against advocating torrenting or something back in the day?

i seldom sit down to watch films thesedays. maybe 1 or 2 a week. and at the moment i'm trying to watch korean films.

i really don't need to see any of these franchise prequels or IP excavations. i liked matrix 1. will i see the new one? i don't need it.

Sopranos cost money on Prime? I remember it being included for free.

Just pirate it. Didn't bf2s have a rule against advocating torrenting or something back in the day?

Stuff floats in and out of the service for free. I think it was free at one point, but isn't now. Maybe it will be free again when deals are negotiated. But if it's on Netflix, I don't really need to wait for that.

I wonder if Bill Gates anticipated all this when he was shitting on physical media so hard, or if it just didn't occur to him that a lot of American internet would still be shit in 2021 and there would be like a hundred competing streaming services, or if he just didn't care because spending power.

I am really looking forward to one day using this line in a conversation.