Im not no, but up until recently The Black Sticks seemed to win everything.  The sport at the elite level is much more competative but if you finish above them, you usualy win it.

Fair to say: Per person NZ are the best sporting nation in the world.

I make that claim based on population to pick from

Millennium Stadium is probably the best place to play rugby in the world. It's a great stadium, good size, fans are close to the action, it has a roof, the only thing that has let it down in recent years was the turf but this seems to have been fixed for the World Cup. The fans there are also predominantly rugby-mad Welshmen and generally very respectful to all visiting teams aside from perhaps England. Even though it was the scene for their worst moment on a rugby field both McCaw and Carter name it as their favourite place to play.

Interesting to see the referees named for the quarters. New Zealand and France get Nigel Owens which is great because he is by far my favourite referee but it's kind of a shame Wayne Barnes can't make the reunion complete. I suppose it had to happen though really; you have four referees and with Garces not viable because he's French, Joubert not viable because France doesn't like him for 2011, and Barnes not viable because New Zealand doesn't like him for 2007 Nigel was really the only option. I don't really think NZ has that much of a problem with Barnes and I don't think France has that much of a problem with Joubert but the decision keeps everyone happy and means no-one can complain about the other side getting preferential treatment. Should be a good contest. If it's true and the French have become a poor team rather than an unpredictable one I'd love to see them get absolutely pummelled by the All Blacks.

Interestingly the South Africa vs. Wales game will be played first. If Wales wins I imagine the local crowd will be in full voice supporting France.
[Blinking eyes thing]
Steam: http://steamcommunity.com/id/tzyon

Had to post this. NZ sports journalist James McOnie is loving this World Cup. After offending Eben Etzebeth by asking if he is a Sacha Baron Cohen character at an official media conference, he's now released this Queen-slash-front-rower tribute with Wales' Adam Jones and a number of others.

You don't get this in football.

You don't get this in football.

Yeah thank god, I thought it was shit and didnt find it funny.  I cant get past 30 seconds without closing it.  Its has become a very popular video so isn't shit, just not my thing.

On my Facebook I get a lot of locals bashing football all the time with Rugby meme's, often the last line reads 'And thats why rugby is the best sport in the world'.

Its not though is it?  And its not as clean as people make out.  Often bans get given after the final whistle.

I enjoy watching both sports along with others without feeling the need to bash sports I dont prefer as much.

Bit nervous about tomorrow. Starts 8am here. Kind of hope I sleep through it. Few things worse than being bundled out in the quarter finals - at least if you go out in the semis you get to play the bronze final - but against the French at Millennium Stadium would be a bit hard to take after what happened in 2007. Probably the harshest moment in NZ sporting history, just above 2013's America's Cup loss.

Be interesting if Wales beats South Africa, (and they might.) Welsh referee in front of a Welsh crowd watching the contest to determine who will play Wales in the semi final; the number one ranked New Zealand or the number seven ranked France. Will not be a friendly atmosphere but then I suppose it never is.
[Blinking eyes thing]
Steam: http://steamcommunity.com/id/tzyon

Gutted for Wales. Could have won that.

Good first half, some beautifully worked tries. The Skudder-step is proving deadly, Savea's back in form, Carter is being godlike in directing play. Can't see the French return from this but then we have been here before.

Savea steamrolled three French tacklers in his second try. Try number 37 for him. Fitting that he equals Lomu's record with a try like that.

Shame Nonu didn't score to give it a full stop but his work in the previous 79 minutes gives him the right to have a chuckle about bombing it.
[Blinking eyes thing]
Steam: http://steamcommunity.com/id/tzyon

So much for my dream fInal. There must be an unwritten rule somewhere that Ireland aren't allowed beyond the quarters. Also Scotland should have won. Incorrect call by Joubert and his team

So much for my dream fInal. There must be an unwritten rule somewhere that Ireland aren't allowed beyond the quarters. Also Scotland should have won. Incorrect call by Joubert and his team

So here we are playing the Rugby Championship again.

best call by ref m8 dont know what youre on about.

You get what you sow or something.

As you know I dont have a clue what Im on about when it comes to Rugby but some ex Welsh player on the bbc says 'The pack wasnt big enough' and has a picture of that wooly Jones guy (oh yeah, Adam).  He wouldnt of won it for us but I still dont get why he left him out.  From what I gather the ref stitched us a bit too didnt he? (I didnt get the chance to watch all the game)

SA won fair and square though from what I gather.

Argentina won fair and square (well impressed with them, another prediction I got wrong), gutted for the Irish fans in Cardiff this weekend but fair play to the Argies, they were very good.

Strayer didnt cheat but the cunting ref did.  You got something football dosent, the ability to freeze the game and have a look from all angles, the prick didnt.  Then at the final whistle he sprints off the pitch down the tunnel. The respect the players have not questioning the ref is admired by all other sports. Yet he's allowed to make a call like that on his own and then to show no respect to anyone else at the game or watching, or listening but sprint off is a disgrace. IMO he's brought the game into disribute, he'd allowed Strayer to get away with a few dodgy hits but thats nothing compared to not even going to TMO and then running off.

Scotland, go short on your line out like others teams have with 2 mins to go in the pissing rain.  Very sorry for them and that'll be hard to take for a while.  I hope the ref never gets to grace a pitch again, Nigel Owens for the Final I hope.

About time they got it right. Millennium Stadium's been the best place to play rugby for ages but up until recently the turf has been awful. 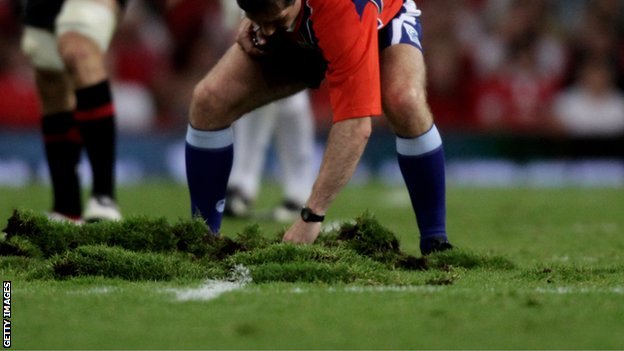 He should get some of that grass and sow it into his head, 'watch those lights dont burn you baldy'.

'Please keep off the grass' unless it quality gear of course.

I can almost see the stadium out of my office window, one of the best stadiums in the world (ask Funky) in the middle of a city, a 5 minute walk from a cricket stadium that has hosted The Ashes, right opposite the bus and train station, surrounded by pubs for the fella's and shops for the chicks.

Wembley is a good stadium, however, it takes 2 hours to get out the car park and is on an industrial estate (as such).  Twickenham is good but in the middle of nowhere with very few pubs.

I believe I live in one of the best sporting cities in The World, Im lucky really.

Will not be waking up at 4am to watch this one. Hope it turns out well for me. If not - well at least there'll be the bronze final to look forward to.

That was like watching the 2011 final again.
[Blinking eyes thing]
Steam: http://steamcommunity.com/id/tzyon