There was a "non-partisan" contest. As usual, I spent about an hour digging through the two and refreshing myself on which one I despised the most and why. Ended up skipping the "non-partisan" who is apparently a Trumper with the local Republican endorsement.

Video shows Ted Cruz getting hit with a White Claw can and booed at during a Houston Astros victory parade
https://www.businessinsider.com/ted-cru … de-2022-11

lmao, is he riding a military vehicle?

Ted Cruz implies the US military is too 'woke' and 'emasculated' to compete with Russia
https://www.businessinsider.com/ted-cru … 021-5?op=1

No military service at all, opining on military masculinity. rofl!!1

He can show up for a fucking Astros parade, but abandons Texas during an emergency. Sad!

The entire town should have brought rotten fruit and vegetables. Can't arrest them all.

Now to see what his online posting habits are like.

I have a feeling that this Ron Desantis may well be your next president. Seems to have the right background & political track record for broad republican and some democrat appeal and he's good at riling up a crowd. Lots of combative language. If he runs against Biden his odds would be good, and much better than Trump's.

It's hard to put a finger on his 'real views' / values though. In my brief reading he appears extremely opportunist and seems to leverage the law & judiciary well - mostly to wage legal warfare on his opponents and make their lives difficult, including those of ordinary democrat voters.

Ron D. is damaged goods. He has the Chris Christie curse of being a popular combative Republican governor against a boring Democrat president. Ron's national reputation is being weird about Disney and crossdressers.

Enough of a wave for Republicans to take a House majority.

Honestly no major changes. A single half of congress doesn't mean a whole ton, nor does even a majority in both chambers with an opposition president. With the "majority" the Dems had in both the House and Senate but right-leaning members not much got done. For the next two years not much will get done. One side will blame the other and the world will continue to spin for US politics.

The slight good news? One of the sure fire ways to swing from R to D or vice versa is to have a terrible economy. With the way the D's held up with how shit our economy is, that's a "win" even when you lose some seats. This same situation when the economy does well means a 2/3rd majority in both Chambers (okay that's a bit overkill).

Good luck convincing Republican voters that it's anything but the Democrats' fault, even if the Republicans control everything.

Crane, a businessman and former Navy SEAL, was leading with 54 percent of the vote as of Wednesday evening, compared to O’Halleran’s 46 percent.

Crane is the CEO of Bottle Breacher, a small business featured on Shark Tank that makes bottle openers built from bullets.

Crane also received support from multiple conservative lawmakers, including Sen. Ted Cruz (R-Texas) and Rep. Kat Cammack (R-Fla.), both of whom congratulated Crane on his victory.

What qualifications. Man makes bottle openers out of bullets. Booze and guns, great combination. Trump-endorsed, wackadoodle election conspiracist. We need more of those.

Voter intimidation has been reported in other parts of the country as well.

The Arizona Secretary of State's office has sent 18 referrals of voter intimidation to police, a spokesperson told BuzzFeed News. On Oct. 24, the Arizona Secretary of State's Office said in a news release that it had reported six potential voter intimidation cases and one reporter of election worker harassment to law enforcement.

“Voter intimidation is illegal, and no voter should feel threatened or intimidated when trying to vote," Katie Hobbs, Arizona's Secretary of State, said in a news release. "Anyone attempting to interfere with that right should be reported. Voter harassment may include gathering around ballot drop boxes questioning voters, brandishing weapons, taking pictures of people voting and following or chasing voters who are attempting to drop off their ballots, and it can all be considered voter intimidation. It is unacceptable."

The complaints were referred to the Department of Justice and Arizona Attorney General's Office for further investigation, according to the news release.

There have been 16 cases of voter intimidation, harassment or interference of voters in North Carolina since the start of early voting, Patrick Gannon, a spokesperson for the North Carolina State Board of Elections told BuzzFeed News. The incidents included an observer getting too close to a voter and an observer yelling at a voter when they were using their phone magnifier.

Karen Brinson Bell, the executive director of the North Carolina State Board of Elections, said they are investigating the incidents and will determine if they need to be reported to police.

One guess as to what the majority of these people are politically motivated by.

Enough of a wave for Republicans to take a House majority.

The infighting and finger pointing right now is kind of funny. Maybe if a Republican loses even with a Trump endorsement, they weren't Republican enough. They betrayed his trust!

considering this was meant to be the big dramatic reveal of trump rising from the ashes, i think the overall outcome is very good.

the mood at mar-a-lago seemed dour. trump was pissed off. his personal endorsement of a bunch of lunks mostly didn’t pay off.

it seems that gen-z are a significant component of stopping the usual midterm swing of disaffected boomers who want change for change’s sake because the previous 2 years haven’t made them millionaires or abolished taxes or whatever.

remember when all the republicans pundits were claiming that student loan forgiveness and legalisation of marijuana would deliver them a resounding victory from the indignant silent majority? yeah, ok.

it’s kind of funny that loudly mocked people like biden and schumer are actually delivering pretty historically good performance, if you look at midterms objectively. for all the venom and rancour in the commentariat sphere, this is a resoundingly ‘mid’ result.

the trump show is over. the republican party machine knows it. the cogs are already grinding as to serving up their next anointed one. sad! i for one am happy to see the worst excesses of 2010s populism being found wanting and disappearing into historical oblivion.

I still would have liked to have seen better performance and offerings out of the Dems. Even on my own ballot, some of the blue votes were made with my nose held. Democrat, but dismissive of environmental issues and the poor. Voting Republican without heavy scrutiny including looking up their site on wayback can be like playing election conspiracist Russian roulette. There was even a "non-partisan." This bleeds into non-partisan contests locally. Nothing non-partisan about an endorsement from a local party, is there.

A lot of crazy anecdotes. From imgur:

We live in a small Colorado county that's 2:1 Republican. They went and nominated an absolute nutzel for the county commission - everyone but a small band of QAnon-adjacent types hates him, but he squeaked by in the primary. His opponent is a bright, young schoolteacher. The Republican is so bad that another Republican commissioner quit his role as the state party treasurer to endorse our Democrat.

We're waiting for the next batch of ballots to be counted, but right now we're winning the race by TWO votes. Some of the Q folks went to "observe" the vote counting, and claimed that a flashing red light on a UPC power supply was really wifi sending secret signals to Dominion to change votes.

Anyway, my wife and I filled out our two ballots and early voted, and as of now we're the difference in the election.

Anyone remember the Jan 6 woman who tried to breach a barricaded door and got shot
by police there? Stymied Republicans on how to react?

San Diego City Attorney Mara W. Elliott announced Wednesday, 33-year-old Roger Stefan Witthoeft Jr. was convicted of all charges including a hate crime, for allegedly slapping a Latino worker last year and telling him to "talk in English you (expletive) immigrant" and "go back to your country."

Hoping for an end to the MAGA insurgency.

Completed my mail-in. All blue.

You could have voted for freedom, why do you hate America? Why?
Русский военный корабль, иди на хуй!

Jokes aside, there wasn't a Republican or a Republican-sponsored person on there I wanted to vote for. Full disclosure, it didn't take a lot of reading. Even avoiding the Trumpers alone isn't a one-issue vote. Trump is a multi-issue man. Not that Republicans get to hold me to task for a one-issue vote anyway. Like, remind me again how forlorn y'all were when a black man was sworn in.

Take on the midterms from The Nation: https://www.thenation.com/article/polit … -midterms/

full article w/o paywall (my "third article" triggered just from hitting the back button from an adjacent article, lmao): https://i.imgur.com/J72u5ZY.png

Won't image tag it here, is long. TL;DR, people shouldn't exactly feel comfortable that the republicans performed as well as they did (even if they performed below expectations), and why. 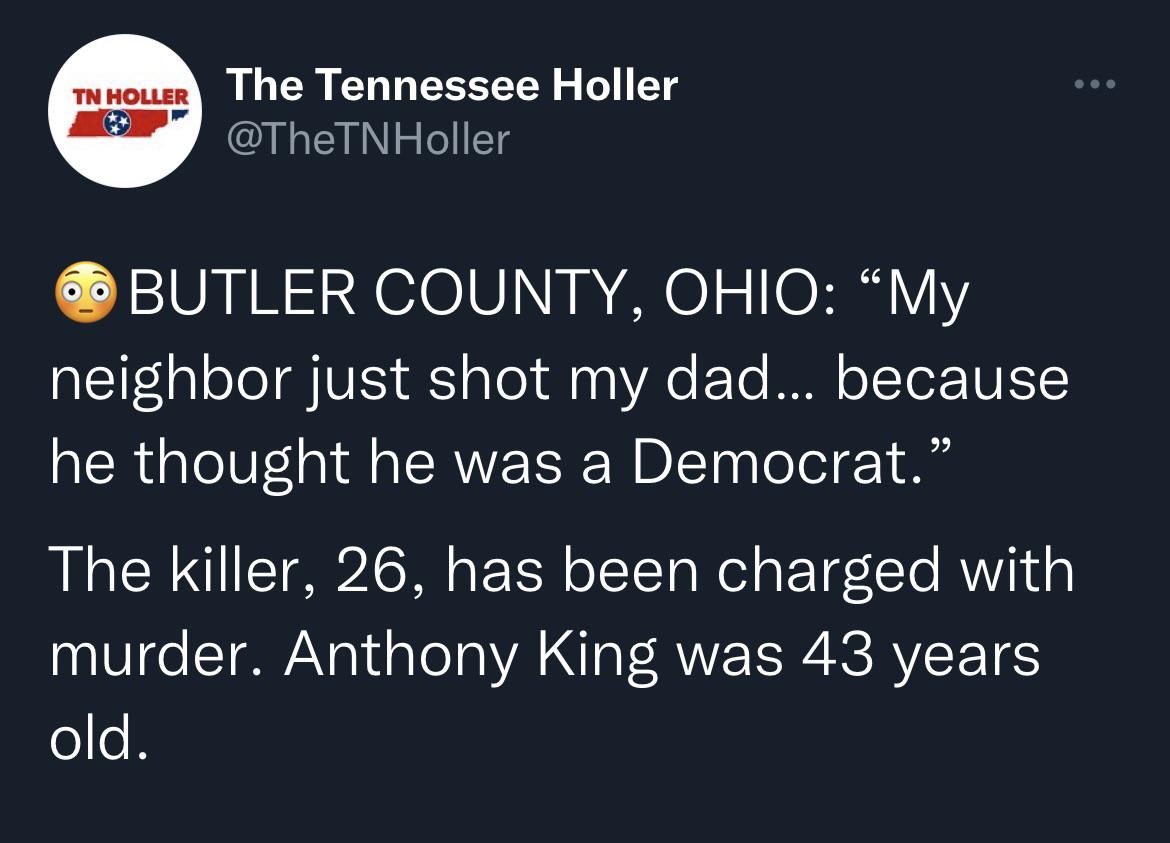 Imagine getting smoked over the low stakes politics of America.

Stakes aren't that low. People die because of our politics, and our policies tend to predict trends elsewhere.

what the fuck lmao

Stakes aren't that low. People die because of our politics, and our policies tend to predict trends elsewhere.

I like how in America you can buy yourself bail whatever you've done.

"Patriots are pushed to commit these acts for freedom and democracy. the verdict is still out. but I do understand their rage."

Fact is America was created by crazy people shooting members and supporters of the legitimate government 'for freedom and democracy', this sort of thing shouldn't be all that surprising.