1789 is the start of the French revolution. The French Revolution is the start of the modern era. Though the unit is called Age of Revolution or something. So Enlightenment, absolutism, etc. are all covered. I walked by the room of my crush once and she was talking about the Spanish Armada to her ESL kids. The director always says "The curriculum is the floor. You set the ceiling".

Plenty of other places are covered in the 'New Imperialism' section. I like that section since I get to talk about places all over the world. One of the things I like to introduce kids to is art and culture from other places that they will never otherwise get introduced to. The industrial Revolution unit sucks by the way.

I like the current sequence for the US history classes but that may be mostly since I familiar with the sequence going back all the way to college. The idea of U.S. 1 I guess being the country working out its identity settled, settled enough, by the Civil War. US history two is then "America as you know it beginning to form". US 3 starting at end of the Cold War sounds good. But until colleges start doing US 3 classes I don't think there will be a push to get it in the high schools.

Did you take AP classes?

1788/89 also the election Washington won. A convenient year I guess, for an American world history course.

e: I had several AP classes. History, English. One of the English classes was a little disappointing, I was hoping to not have to go through a refresher course on parts of speech for the first several months. Barf.

Your dept head made a good point about the controversiality of modern history. People aren't taught how to keep their cool when presented with different or opposing ideas. I think it's a significant problem that rips at the social integrity of the country. If more people could do this, there'd be less fingerholds for unreliable rags like Fox.

Regarding modern subjects he often says "It is our responsibility to teach this (whatever is in the news)" and also "be fair. You don't want to end up on CNN or Fox News".

Everyone is guilty of getting bent out of shape at being told they are wrong at least once or always for their pet subject. I don't think the political landscape of the country has been deformed because of people always willing to karate chop someone else over their opinion.  I think everyone gives themselves a pass to be ugly once and awhile and the cumulative effect is billions of pieces of unrelated ugliness spread across the world.

I think there'd be a lot less threats of karate chopping and taking of international flights to punch people in the face if more people knew how to argue and how to deal with their inner simian rage when someone disagrees.

CRT is good area to segue to the SCOTUS nomination.

The judge they nominated is doing a good job of not cracking under pressure. The right wing seems most animated about her response to "can you define what a woman is?". The judge responded with "I am not a biologist"


National Review headlines about it
"The Takeaway from KBJ: She Can’t Define a Woman"
"How to Answer the Question ‘What Is a Woman?’"
"I Know What a Woman Is"
"Judge Jackson Refuses to Define ‘Woman’ during Confirmation Hearing: ‘I’m Not a Biologist’"

The judge they nominated is doing a good job of not cracking under pressure. The right wing seems most animated about her response to "can you define what a woman is?". The judge responded with "I am not a biologist"

It's not just Jackson: Even scientists and 'philosophers of biology' can't define what a woman is, says USA Today
https://www.washingtonexaminer.com/news … -usa-today

Supreme Court nominee Ketanji Brown Jackson was stumped when Sen. Marsha Blackburn asked her to define what a woman is, but USA Today claimed scientists and people it identified as "philosophers of biology" all agree that it's an impossible question to answer.

It doesn't really matter what she would have answered with. Obvious bait, they wanted her to go into defense of a social definition so that they could latch onto that.

Yeah it was a total gotcha question that she answered as well as you could.

Embarrassing and strange that so much thought is being given to the holiness of women's sports. Sports are stupid anyway.

Transwomen in sports is a valid topic to explore, but there is a certain stench in its current discourse. I've made my point about this enough times in enough posts to rouse zeek's annoyance, but I get a strong impression that it isn't really dwelled upon for the sake of fairness to biological, cisgender women in women's sports. There always seems to be some underlying bias lurking beneath faux concern. Dig hard enough and you can usually get a reaction to the effect.

I normally wouldn't bother myself with it, but I sometimes get the "whaddya think about" openers. On a number of occasions, I've just said it wasn't that important of an issue to me and that the sports people and doctors can figure things out. "Find another bakery" has been handy.

I think it's an overindulgence in an ultimately temporary triviality. Whatever will the conservatives do when medtech progresses to the point where a transitioned person is indistinguishable from at birth. If civilization makes it, that is.

People know you can't just complain directly about "the gays" because 'mind your own business' and 'why are you even thinking about that?' So they complain about swimmers, bathrooms etc. in order to have a chance to be ugly. 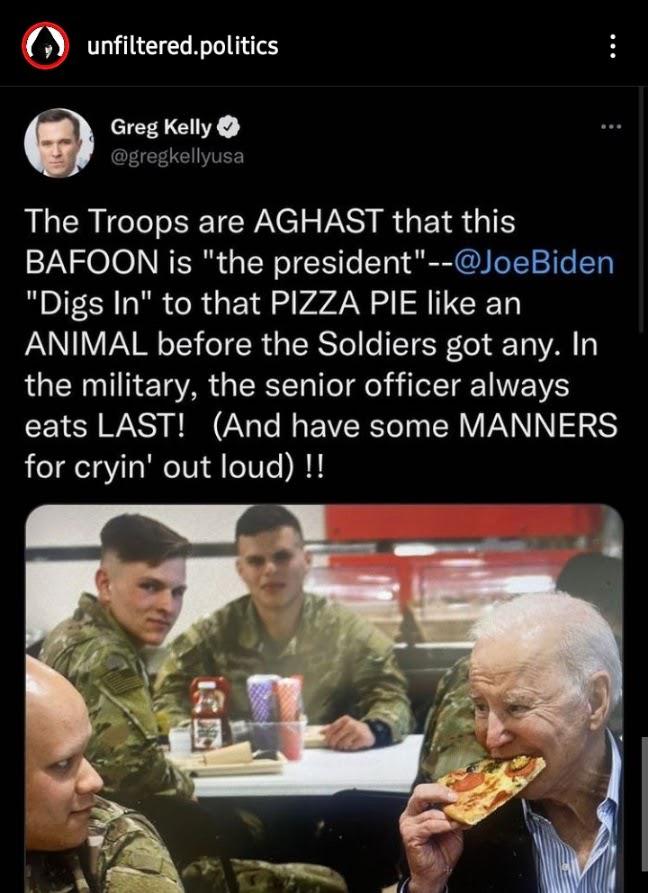 that son of a bitch

Mountains out of molehills. Painful attempt at pedantry, and probably misleading.

Seems like he sat down to a lunch in progress. Looks like a less awkward photo op than I could have expected out of the Trump admin.

Expressed disappointment that he could not enter Ukraine to survey the damage in-person. A trip that did not happen much to the relief of secret service I imagine. A horrifying thought, really. Sending the president into a warzone like that. Nerve-wracking comment. Why didn't Kelly focus on that?

Gregory Raymond Kelly (born December 17, 1968) is an American conservative television anchor, television host, and retired lieutenant colonel in the United States Marine Corps Reserve. He is the host of Greg Kelly Reports, on Newsmax TV. He was previously the co-host of Good Day New York on Fox 5 NY WNYW, with Rosanna Scotto, from 2008 to 2017. Previously, he was the co-host of Fox and Friends and White House correspondent for Fox News.

I've got zero time for his twitter, a bunch of aimless, sometimes incomprehensible complaining.

e: They always do this stuff with literally every president who isn't a Republican. Remember coffee-salute-gate? Omg, Biden and the boyz enjoying a slice. Is that really the worst they can dig up? How far can you fall from being an embedded war correspondent.

I think the dude believes you should eat a PIZZA PIE with a fork and knife.

I don't believe in special pizza etiquette. Fork/knife if you feel like it. Fold it in half lengthwise, role like sushi, jab a fork into the crust, or use your fingers. Eat unfolded. Center to crust, crust to center. Remove crust, eat crust, add pineapple, who cares.

And no, I don't want to know how this guy eats his pizza. 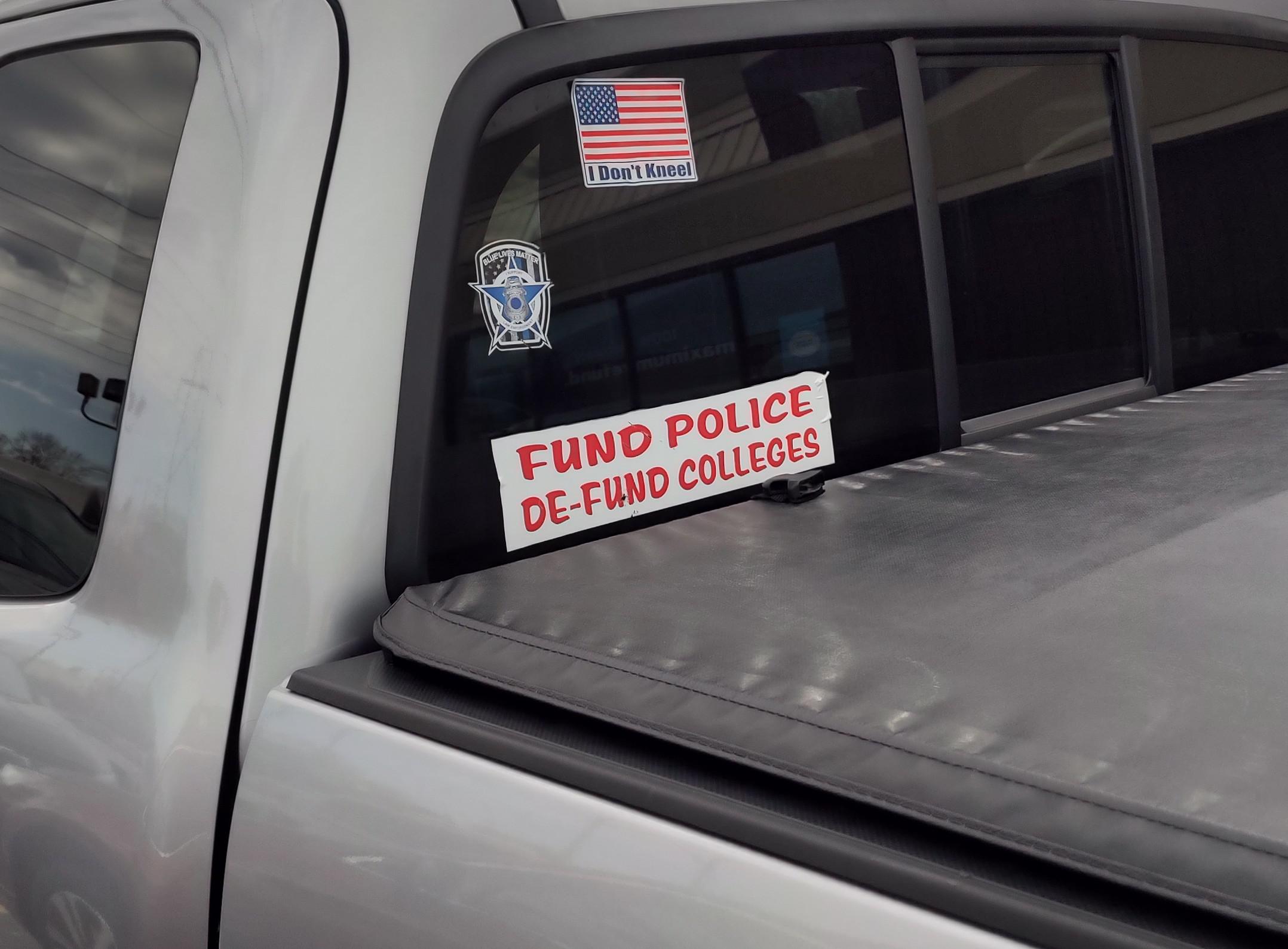 I bet this person didn't go to college. Imagine being okay with people knowing that. 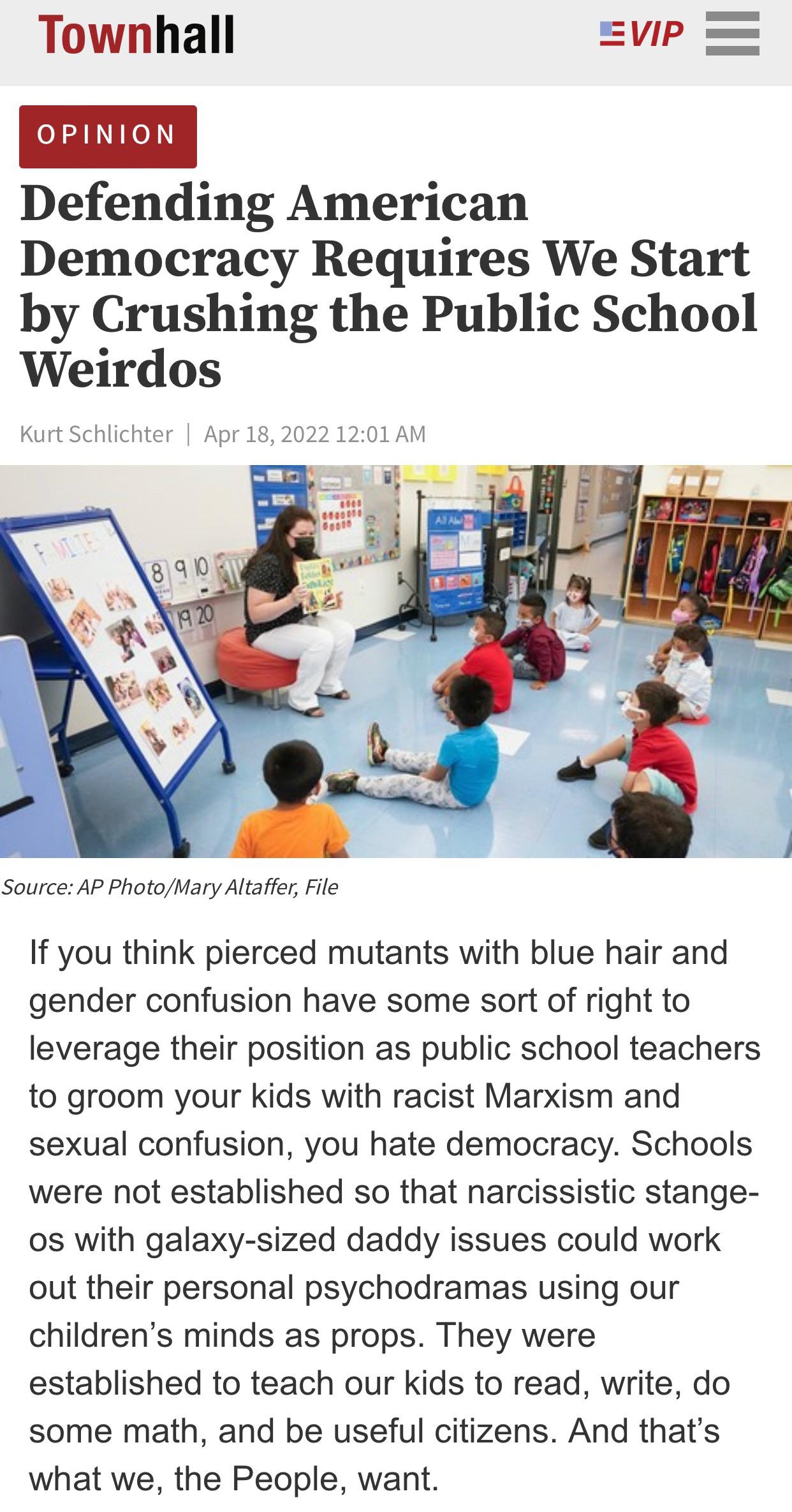 Right on, crush those teachers.

demonising schoolteachers always confuses me. talk about punching down on a group who are already under appreciated.

this huge new drive to ban books and politicise curricula is hugely worrying. would be talked about with relish in the press/media/politico class if it was happening in russia as a sign of a crazed authoritarian culture.

maybe you can ask dilbert for some insight. complaining about kindergarten teachers has been a particular bugbear of his over the years. that dangerous grade 3 dyke fifth column!

Anyone who's listened in on their city hall meetings will understand why calling your paper "Townhall" isn't the most flattering. An article like this would be shocking if from a paper that does actual reporting. Townhall is deliberate fake news. Imagine scraping around the bottom of the scum barrel and being surprised to find scum.

re: "it's what we the people want"

I love how this is always rolled out when it's what you want, but never when it's what people with other opinions want. Because, you know, Americans are known for being one homogeneous mass with all the same opinions. "It's only brainwashing when it's something counter to my opinion."

Doesn't mean the right should be free to do it to balance things out, school should be apolitical.
Русский военный корабль, иди на хуй!

yes, the Left, nefarious communists all, trying to teach the objective history of slavery/empire, and so on.

the right are fully justified in banning the truthful examination of history. it's the hallmark of all the world's most successful, brilliant states, like china and russia.

yes, the Left, nefarious communists all, trying to teach the objective history of slavery/empire, and so on.

the right are fully justified in banning the truthful examination of history. it's the hallmark of all the world's most successful, brilliant states, like china and russia.

Instead of fixating exclusively on all the things white people have done lets teach all the genocides perpetrated through history to get some perspective.
Starting with the ones committed by the jews.
Русский военный корабль, иди на хуй!

you mean those mythical biblical accounts again you keep going on about?