they want to be addressed using a simple letter change.

isn't the problem, here, the people who make querulous and inane objections?

Getting bent out of shape demanding a letter change seems inane.
#FreeBritney

Since you brought it up, zeek, there is some ounce of truth to the whole social media witch hunt thing. Misinterpreting (intentionally or otherwise) a post, or maneuvering someone into making one that can be taken the wrong way, and then dogpiling. Seen it happen, many times.

Your reaction is a perfect example of one of the reasons why I don't do politics on named social media, although my usage of those applications is vary sparse.

Can't be long before someone gets cancelled for not getting LGBTIQX in the right order or misses a letter.

How are lesbians listed before gays anyway?
#FreeBritney

"Latinx is silly, can we get another word please," very low investment stuff. Bad game box art can be comment-worthy too without "ruining your day" or whatever. With apologies to the artists.

they want to be addressed using a simple letter change.

isn't the problem, here, the people who make querulous and inane objections?

Getting bent out of shape demanding a letter change seems inane.

but they're not only demanding a letter change, are they? it's about recognition in a wider sense. as i said, these movements aren't only and exclusively spending their time tinkering with letters.

and i don't know that the great majority of them do get 'bent out of shape' when someone innocuously uses the wrong term. it's when 'culture warriors' decide to take them to task over their whole project that it becomes a problem. which is really what this is about, isn't it? you're not upset about the replacement of a letter: you're pissed that a group want equality, or recognition, or 'to take over the other groups' or whatever.

Years of rot, more than enough stuff to make you feel ill.

One girl fell to her knees. Another threw up. Police handcuffed the youngest, an 8 yo with pigtails.

Their supposed crime? Watching some boys fight — and not stopping them. (THREAD)

At-a-glance-deconstruction (ignoring revenues for a moment), you're screwed here whether or not you get involved in a fight. At my school, being attacked was cause for suspension. Maybe even trying to break one up: suspension. There, just being near a fight is an arrest. In-fucking-credible.

Black Children Were Jailed for a Crime That Doesn’t Exist. Almost Nothing Happened to the Adults in Charge.
Judge Donna Scott Davenport oversees a juvenile justice system in Rutherford County, Tennessee, with a staggering history of jailing children. She said kids must face consequences, which rarely seem to apply to her or the other adults in charge.
https://www.propublica.org/article/blac … esnt-exist

Years of rot, more than enough stuff to make you feel ill.

One girl fell to her knees. Another threw up. Police handcuffed the youngest, an 8 yo with pigtails.

Their supposed crime? Watching some boys fight — and not stopping them. (THREAD)

At-a-glance-deconstruction (ignoring revenues for a moment), you're screwed here whether or not you get involved in a fight. At my school, being attacked was cause for suspension. Maybe even trying to break one up: suspension. There, just being near a fight is an arrest. In-fucking-credible.

Black Children Were Jailed for a Crime That Doesn’t Exist. Almost Nothing Happened to the Adults in Charge.
Judge Donna Scott Davenport oversees a juvenile justice system in Rutherford County, Tennessee, with a staggering history of jailing children. She said kids must face consequences, which rarely seem to apply to her or the other adults in charge.
https://www.propublica.org/article/blac … esnt-exist

I forget there are places where people talk like that. I am sure they find the way we talk in the north funny but our way of talking makes it on television at least. I have heard them say we talk too fast here. Not sure why you would admit to that.

I have to go to bed now and will read the rest of the story tomorrow though I guess I know where it is going. 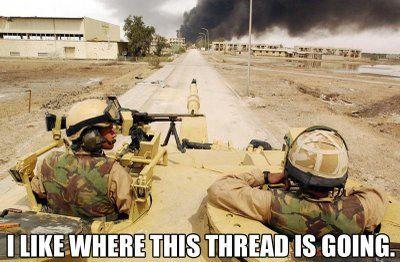 Did you ever watch the final episode of Seinfeld? Sounds like the same fake law was used to arrest some children. Awful judgement call. Dumbasses.

I met my union president for yadda yadda yadda. We were talking about my future goals. I said I wanted a MA in X Leadership. He warned that "advisory positions go to people with political connections". I was dismayed at that. My university professors were supportive of me going into the program.

I felt bad about that for a little while but I decided to suck it up and go into the program anyway. Spite is a good motivator too. Besides I don't forsee the traditional white political establishment holding on for another 10 or 15 years. Literally don't have the numbers.

Four thoughts about this...

1. Do you remember in Game of Thrones when the eunuch warned that Little Finger would be happy to be king of the ashes? Yeah, I get that totally. The white political establishment here has been accommodating enough but I would throw them under the bus if it meant getting a supervisor role. Après moi, le déluge Reminds me of decolonization in Africa. So many post-colonial dictators came from western schools and military academies. Oftentimes displayed little loyalty to their old masters. "The Europeans taught us to play poker after they won all the chips".

2. I am not oblivious to the fact that all of the BLM stuff opened up opportunities though I am still a little skeptical of the utility of all of those fires. The riots were a good show though.

3. I have said many times before that "not all minorities are the same". Black people getting gunned down by police is a different issue than half breed minorities wanting to get into leadership positions. It's not a good situation when all of that gets mixed into the same narrative.

4. We could probably avoid all of this racial status anxiety if we just created more positions of influence for people to move into. I don't like that I need to join local political organizations in order to become a middle level supervisor. That's all I really want. A mid level position.

3. The one thing I've learned from not watching GOT is that you're going to have to join a yacht club. I got my first - lets use the word 'career' - break from membership of the university pistol club, should probably have joined the yacht club.

4. You can't exercise tyranny from a mid-level position, not for long anyway
#FreeBritney

I only want a mid-level position. I don't want to run a Reign of Terror. I just want better job conditions, higher pay, and more chances to plan field trips with other teachers. I have a plan...

I am going to join the Democrat party and start doing events to build "political connections".

Being in a yacht club sometimes hurts political opportunity. WA gov candidate Dino Rossi (R) suffered from that. Yacht Club Rossi. Which Yacht Club Rossi largely ignored this vilification in his unenthusiastic campaign against Gregoire. What Yacht Club Rossi should have said was that he wants more Washingtonians to have the opportunity to move up the wealth ladder, join yacht clubs, and reinvigorate the middle class.

Never thought I'd say I miss him, but in 2020 the Republicans put Loren Culp, a small-town-cop who thinks he's above state law, also right-wing gadfly and political novice, up against Democratic governor-for-life Jay Inslee (who shamelessly intends to run for his fourth term in 2024). I have to wonder who the Republicans will get next, and how far up the KKK chain of command they'll be.

You will miss your democrat governor for life once you get a Republican in office someday. Fucking Chris Christie.

I voted for Inslee in 2020. I just wish the Democrats had a better offer.

In her newly released memoir, Going There, Katie Couric writes that she edited out comments from Ruth Bader Ginsburg, in which the Supreme Court justice accused those who kneel during the national anthem of showing “contempt for a government that has made it possible for their parents and grandparents to live a decent life.” Couric, the Daily Mail reports, claims that she believed the 83-year-old justice was “elderly and probably didn’t fully understand the question.” Couric, who fashions herself an intrepid journalist, says she was “protecting” the “Notorious RGB” — a woman who until her last days was offering decisions on the most important legal questions in the nation and celebrated widely by the Left — from political backlash.

I never liked Ruth Bader Ginsburg. The day she died I was the first to criticize her for holding on as long she did instead of retiring. Glad to see I was vindicated regarding her personality.

it’s the job of supreme court justices to make difficult rulings on often times very sensitive and novel areas of law. not to become celebrities or people with fan clubs. the whole point of her job was to make occasionally tendentious and controversial decisions. that’s why the highest judicial body exists, to moot out complex grey areas not yet covered in law.

the desire to make her fit the imago of a perfect liberal hero for rights and social justice is inane. judges can’t be that person. that’s slick trickster stuff for politicians to sell.

At this point, judges are just another type of politician in this era. Sad really.
The irony of guns, is that they can save lives.

Federal judges are appointed and confirmed, esp. for supreme court greatly hinging on politics, and how loyal they're predicted to be to a political cause. Other judges are elected, sometimes based on very little offered information, other times based on how tough they are on crime. Political.

If Couric is telling the truth here, not a good look for RBG, and a profound misunderstanding of what the kneeling stuff was all about. The parents and grandparents stuff makes even less sense, appealing towards younger people's respect for their elders *checks notes* because this is such a great country right now? All the social, economic, and environmental ills, a "thanks pops" would only come off as sarcastic.

"If you don't like it here, move to Somalia and tell us what you think!"