The fact is its a federation of states and the only federal issues the govt can really get involved in are those defined by the constitution 233 years ago.
Its stupid but try telling an American.

OTOH The EU is falling apart because nations don't like being told what to do, and many US states are the size of the average nation.

As I see it there are two fundamental problems:

- The system of government is shit

- Many Americans are nuts

Neither has any foreseeable resolution

how is the EU falling apart, exactly? answer succinctly in a way that doesn’t sound like a foamy-mouthed murdoch tabloid.

‘telling nations what to do’. that damned europeans court of human rights! tyranny!!!!

Abortion was legal for the past 50 years due to an SC ruling based on the constitution, it's absolutely bizarro universe to me that you'd now argue the exact opposite based on the same fucking unchanged constitution - and using that as an argument against the opposing side to make them shut up. 'The constitution doesn't protect access to abortion! It's a state right issue! Argument over!'

Obviously there's some room for interpretation here that seems to very strongly depend on subjective readings of what the due process clause in art. 14 actually means and what it does and doesn't protect, among other issues.

Well thats the stupid part, whenever any issue comes up instead of the govt sorting it out it goes to nine unelected stooges to decide what a bunch of drunk slavers really meant 233 years ago and how it should apply to a novel situation which wasn't even conceivable back then.

"If a company registers its domicile as an orbiting satellite does the US digital communications code apply to its Twitter feed? Lets have a look through the hand-written notes of Jefferson's assistant"
Русский военный корабль, иди на хуй!

how is the EU falling apart, exactly? answer succinctly in a way that doesn’t sound like a foamy-mouthed murdoch tabloid.

‘telling nations what to do’. that damned europeans court of human rights! tyranny!!!!

Various countries are ignoring and have always ignored, european law, even the faggiest countries are rapidly moving to right-wing disengagement.

The National Front came third, they did better than the Lib Dems typically do in the UK.
https://en.wikipedia.org/wiki/2022_Fren … e_election
Русский военный корабль, иди на хуй!

The balance of power between federal and state governments is an evolving, sometimes haywire (Trump) thing.

I see this stuff about the constitution being 200+ years old and stuffy and pointless or whatever, but it's not an inflexible thing. It can be argued that the constitution a living document. Several ratifications have been within the last 100 years, at the tip of that the whole votes for women thing. Other laws are made, updated, upheld, and repealed all the time. State laws overturned by the SCt for unconstitutionality. The SCt overruled by congress on other matters.

Its stupid but try telling an American.

What is this twitter snark? Problems in America are a part of why we have protests in the first place, but let someone hold up a BLM sign and you'll post something about some special, genetic predisposition of blacks towards violence.

I'm sure the constitution could be modified if everyone behaved like grown-ups in the interests of the country.
I don't see it happening in any of our lifetimes, except to regress.
Русский военный корабль, иди на хуй!

The constitution has been modified, several times. What are you talking about.

I don't even know where to start with your race stuff.

When was the last significant change though?
1933?
Русский военный корабль, иди на хуй!

Since you're on the wikipedia article, 24 and 26 are more recent and related to voting rights. GJ on picking the one that would stand out to you the most though, the repeal of Prohibition.

e: 25 also of import for a nuclear power: https://en.wikipedia.org/wiki/Alexander … trol_here' (see 7.2 if it doesn't take you right to the section)

“Today’s Supreme Court decision to overturn Roe v. Wade means that the once Constitutionally protected right to access an abortion is no longer guaranteed nationwide. This decision carries grave consequences for our adolescent patients, who already face many more barriers than adults in accessing comprehensive reproductive healthcare services and abortion care.

“The American Academy of Pediatrics (AAP) this morning reaffirmed our longstanding policy supporting adolescents’ right to access comprehensive, evidence-based reproductive healthcare services, including abortion. Today’s ruling means that in many places in the United States, this evidence-based care will be difficult or impossible to access, threatening the health and safety of our patients and jeopardizing the patient-physician relationship.

During his confirmation hearing in 1991, then-judge Thomas was cagey about his position on Roe v Wade, the landmark ruling that protected Americans' right to abortion for nearly 50 years.

"I can say on that issue… I have no agenda," he told the US Senate under oath."

Buried on page 119 of the final opinion, Justice Thomas wrote the court "should reconsider" other past rulings that afford Americans certain rights.

He referenced the key cases guaranteeing access to contraception, and legalising same-sex relationships and same-sex marriage.

"In future cases, we should reconsider all of this court's substantive due process precedents, including Griswold, Lawrence, and Obergefell," he wrote.

Critics of Justice Thomas were quick to point out there was one ruling he didn't mention in his opinion.

And it's one that affects him personally.

The 1967 ruling in the case of Loving v Virginia protects the right to interracial marriage.

As a black man, Justice Thomas's own marriage to Ginni Thomas is recognised in the US because of the precedent set by Loving v Virginia. 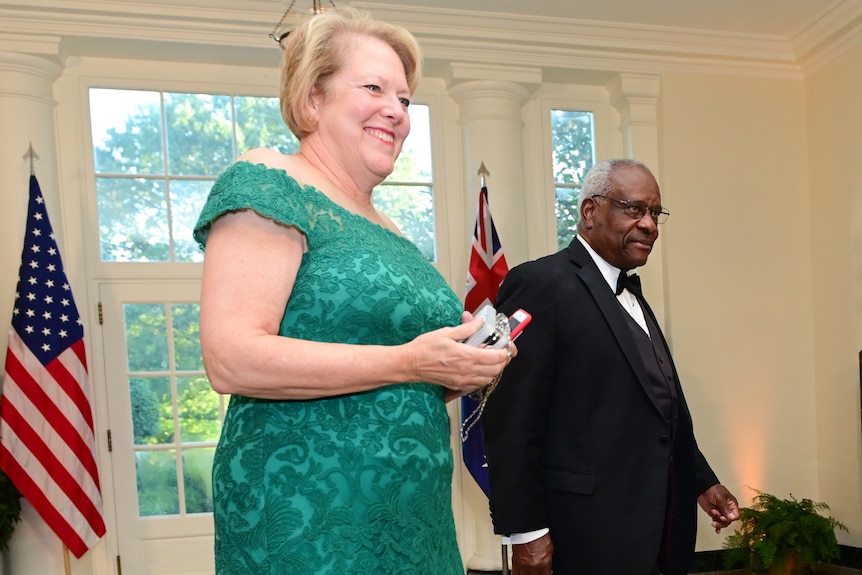 When Loving, and Brown were decided the Democrat congressional leaders codified them into law through a series of Civil Rights Acts stretching from the late 50's to late 60's.

The stuff around gay marriage and abortion was never made into law. Democrats never used their majorities to get something through. They probably never had a majority to do so.

It is also a little problematic that Democrats are focusing so much on the fact that the black guy has a crazy white wife.

Hmm. I was hanging out with two teachers at the end of the year the year before this one. The old boomer mentioned something about how abortion is killing babies. The 32 year old lady teacher I have a huge crush on looked uncomfortable and tried to change the subject. She told me afterward that she had an abortion once and didn't like hearing the boomer talk about it like it was murder. I didn't ask her for the details of the abortion but I do know she wants children someday and talked about it with her live in boyfriend who seems to be taking his time with it.

Why do I bring this up? I never would have guessed that the lady had an abortion if she didn't tell me. I now assume that there are many people walking around with secret abortions or have had to get a Plan B from Walgreens after making a bad judgement call. I would also bet people here have had close calls or times of doubt and worry though nobody wants to be the one to admit they had to go for these kinds of services and products before.

About 25% of all women will have an abortion some time in their lives. It shouldn't surprise you.

27% of abortion patients identify as Catholic.

Go to any pharmacy on a Saturday or Sunday morning and you will see young women queued up for Plan B.

None of this should be a mystery or sacred knowledge to someone who has strong opinions on abortions and child-bearing. I bet next you're going to talk about the rhythm method!

I don't have strong opinions on abortion and child bearing. I just believe that abortion is the killing of potential life. I am okay with that though. The government drops bombs on children anyway.

Is stopabortions a thing? Never heard of that sub.

Have you ever considered how many people will die so you can transit GPUs between Taiwan and the U.S.?

pretty poor riposte. you do derive pleasure/satisfaction from watching people get insta-gibbed on the internet. 'the sanctity of life'. i wonder if early christians rubbernecked as much as you do?

it's frankly insane to me that anyone would consider it their business if a woman had taken 'plan B' before. 'poor choices', WTF. yeah, like wanting to practice good sexual health/protection and prudent family planning ... even people in committed relationships have accidents or scares before they're personally or financially ready for a kid, macbeth.

shaming women for next-day contraceptives is literally medieval. it's up there with forbidding africans from using condoms. there is zero credible scientific rationale for judging women for 'morning after pills'. yeah, that's not a life buddy.

Is stopabortions a thing? Never heard of that sub.

Have you ever considered how many people will die so you can transit GPUs between Taiwan and the U.S.?

I got a new job about 8 months ago. Where you been?

I think about what I do for work and how it supports the american oligarchy every single fucking day.

What I don't think about is inserting my opinion into what should be private medical decisions. It's fucking weird!

I am not judging anyone for getting a plan B or abortion. I understand mistakes happen when things are hot and heavy. We are all young urban professional millennials right? Like I said before, I would be skeptical of anyone here who is sexually active and doesn't have a handful of bad choices of various kinds under their belt. I don't think you could really be active and not have a string of shenanigans. I assume most of the men politically opposed to women's rights including birth control and abortion are just incels. You couldn't actually be in favor of restrictionist regime if you are out enjoying the fruits of 60's counterculture.

That said, abortion where they need to surgically extract is in fact a type of murder. I have just made peace with that fact and a lot more pro-choice people need to get on my level.

aren't most surgical extraction-type abortions for things like ectopic pregnancies and serious medical complications? so young able-bodied women should die to please a christian theologian's understanding of life?

I think after a certain amount of weeks they need to go in and do it manually. It should still be legal.

9 out of 10 abortions are before 12 weeks in rich/developed nations.

more than half are induced or relying on medication.

late-phase surgical extractions are extremely uncommon, if not illegal, in most places i know of.

i'd rather stick with the findings of the BMJ or NEJM on this topic than a pastor's thinking about when intelligent life begins, in any case.

9 out of 10 abortions are before 12 weeks in rich/developed nations.

more than half are induced or relying on medication.

late-phase surgical extractions are extremely uncommon, if not illegal, in most places i know of.

i'd rather stick with the findings of the BMJ or NEJM on this topic than a pastor's thinking about when intelligent life begins, in any case.

i think is what a lot of ppl are missing. plan B etc is technically abortion as well but the baby is not developed. later term abortions should absolutely be illegal unless the mother's life is at risk. at that point the baby is already living. there's extremely preterm babies that are born and live so how could someone argue thats not a human just because it hasnt left the womb is beyond me. there's a reason why if u kill a pregnant mother u can get charged with double homicide
gang shit