Imagine it going full circle with getting punched in the eye resulting in an assault charge for the victim.
hold police accountable for crime and misconduct

I've seen studies going back and forth on this for a long time. I think the key word shouldn't be so much "will" as "could." I think it's easy for readers to to ignore a lot of other circumstantial and societal causation out there, that people doing the media violence studies are aware of but do not address within their scope. The difference between percentages of people who played Doom who didn't go on violent rampages, and the percentage of people who played Doom who did, is probably vast.

I think people get defensive because the media and certain politicians pick up on exploratory studies and crank the sensationalism up out of context to them being ticking time bombs for playing Quake or watching Robocop. It's easy to see why in response, people would point out all the unaddressed or ill-addressed violence at home and at schools. Small element: I remember at high school you could get in trouble for being in a fight even if you didn't throw a single punch or kick. Still suspended, and on your record. Since strictly self defense is just as bad as instigating, it's like the lesson is "you're screwed anyway, so put the hurt down while you can." Zero tolerance policies are retarded sometimes.

These things go round and round, it would be great to see an actual study.

Anecdotally the three kids I knew who were seriously disturbed and violent were all exposed to violent films from a very young age, their parents were all right-on libertarians.
Русский военный корабль, иди на хуй!

21 year old neckbeard killed 8 Asian women at 3 massage parlors in Atlanta. May we please tastelessly speculate the reason for his actions? 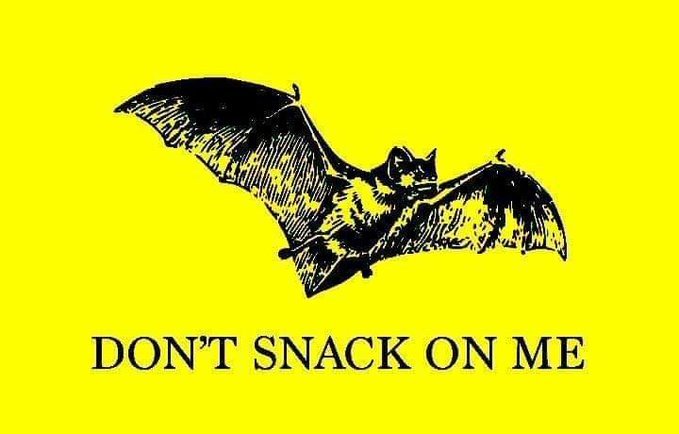 21 year old neckbeard killed 8 Asian women at 3 massage parlors in Atlanta. May we please tastelessly speculate the reason for his actions?

Is it bad that he looked about as I expected? Side buzz, floppy top, sparse scraggle chinstrap. Firm-face, pursed-lips in one photograph.
hold police accountable for crime and misconduct

Conservatives are saying this is a false flag attack to cover up the fact that most hate crimes against Asians is committed by black people.

No dispute there but the crimes are different. Black people are likely to punch a random Asian person on the street. White racism occasionally manifest in dramatic acts of extreme violence and mass murder.

Either way, I don't have a stake in this three way racial violence mess. The online screaming matches are usually a good show though. 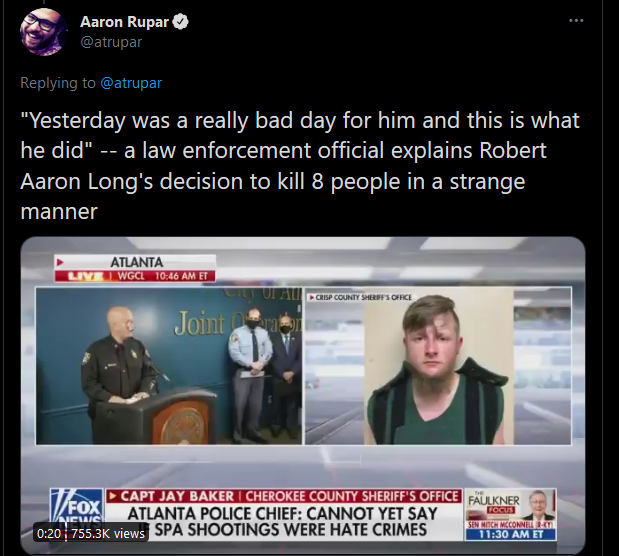 What is this batman shit? What about everyone else's really bad day?
hold police accountable for crime and misconduct

some cops are really highly unintelligent.

When I have bad days it's because I stubbed my toe, blurted out a swear word near my parents and they yelled at me for swearing.

Not, you know, murdered a bunch of people. But I guess everyone is just different ya know?

The whole story would be comical if 8 innocent people weren't killed. The guy is super religious but also a sex addict who had been to rehab and a halfway house. Kicked out of his parent's house because of his sex addiction. He wanted to kill himself but instead decides it would be better to kill Asian women in order to remove the thing he is addicted to.

This guy just had a bad day and the dude who shouted racist slurs on live TV was just low on blood sugar.

Whatever happened to taking accountability for your actions? These people are fucking pissants

I wonder if his company will have a team-building business trip in Mexico that he can get released for.
hold police accountable for crime and misconduct

This guy just had a bad day and the dude who shouted racist slurs on live TV was just low on blood sugar.

Whatever happened to taking accountability for your actions? These people are fucking pissants

of course the cop talking bollocks has a social media history of posting anti-china stuff too.

Imagine being born a poor woman in China but being able to get a family reunification visa to the U.S. because your relative is really good at engineering and got a job in the U.S. You take a job at massage parlor in the city of Atlanta. It's not a glamorous job but you get to hang out with people like you all day and you make enough with tips to live pretty comfortable. You hope to someday open up your own place or maybe will get lucky and meet a rich white guy who is lonely but pleasant. Life is simple and okay. You show up to work your shift and get comfortable. Then a fat white guy who smells a little weird walks into the place looking nervous. You think maybe this is his first time and he is nervous and you get out a hello with a smile before he pulls out a gun and fucking ends you because he feels bad that he too much enjoys looking into the eyes of prostitutes with the same shape as yours.

Atlanta is a hotbed for human trafficking. I would not be surprised if this case turns over some stones in that regard.

I was going to complain about the potential over labeling of sex work as 'human trafficking' but we at least we have a federal government that won't do some nasty shit and deport victims or "victims".

I love the specificity of about being unsure if it was racially motivated, as opposed to being unsure that it wasn't. Not a neutral statement at all.

Police really have no business buttering this man up for a listening jury pool.
hold police accountable for crime and misconduct

I was going to complain about the potential over labeling of sex work as 'human trafficking' but we at least we have a federal government that won't do some nasty shit and deport victims or "victims".

There was a article I read where a lot of back of the house help at Asian restaurants were trafficked. I would imagine it's more akin to indentured servitude than what we traditionally associate with human trafficking.

I am surprised indentured servitude hasn't come back as something libertarians think will be good for the country.

It's already in their platform.