guy deserves to get gang banged in hell imo.

Video says the cop got four years. Seems like a slap on the wrist to me. If Bryce Masters' father hadn't also been a cop, maybe the FBI would have never pressed the matter and the police department would have been able to successfully squirrel their "brother" out of the way of trouble.

Principal Deputy Assistant Attorney General Vanita Gupta, head of the Justice Department’s Civil Rights Division, and U.S. Attorney Tammy Dickinson of the Western District of Missouri announced that former Independence, Missouri, Police Officer Timothy Runnels was sentenced to 4 years in prison for violating the constitutional rights of a minor who was in his custody.

As part of his guilty plea, Runnels admitted that while he was employed as an officer of the Independence Police Department, he deprived the minor of his civil rights by deliberately dropping the minor face first onto the ground while the minor was restrained and not posing a threat to Runnels or others.  According to the court filings, Runnels also admitted that his actions resulted in bodily injury to the minor.

Masters appeared in U.S. District Court in Kansas City during a sentencing hearing for Runnels.

After several hours of sometimes emotional testimony, District Judge Dean Whipple took the case under advisement and said he would announce a sentence Wednesday.

For Masters, every day since the incident has been a struggle, he told the judge.

He has lost many of his childhood memories, and his inability to focus and retain information has derailed his plans to attend college.

“I get in the car to go somewhere and then I’ll forget where I was going,” he said. “I’ve missed job interviews because I forgot them.”

He has trouble getting to sleep and staying asleep, and when he does, he often awakens from nightmares in cold sweat.

Each day is the same.

“I feel physically and mentally weak every day when I get out of bed,” he said.

Meanwhile, some people are serving life sentences without parole for nonviolent crimes.

The whole thing is severely lopsided.

he got $6.5 mill, but a lifetime of recovery after a serious brain injury is no joke. i'd rather not have the brain injury.

the cop tased the youth in the heart for the equivalent of four trigger presses. let's not even get into the fact that he hardly resisted arrest before being yanked out the car. he was asking, quite rightly, why he was being arrested/detained, to which he got no answer.

cop should not be anywhere near any position of authority for the rest of his life. let him hoof horses or something on the plains. he has a giant prognathous head that says 'outdoors labour' all over it.

I'm also hung up on them mentioning that they found mj in the poor kid's pocket as if it were pertinent and resolves everything. With the way the story's supposedly been altered when one piece didn't stick to the wall, up front I don't even trust that it wasn't a plant job. And even if it wasn't, vilifying him with possession of a drug, and one that's legal in some states, to deflect focus. How rotten is that.

Two mass shootings at a Naval facility in the last 2 days. Why are so many people going naval?

Censoring rifles in articles does not help lessen any phallic interpretation. 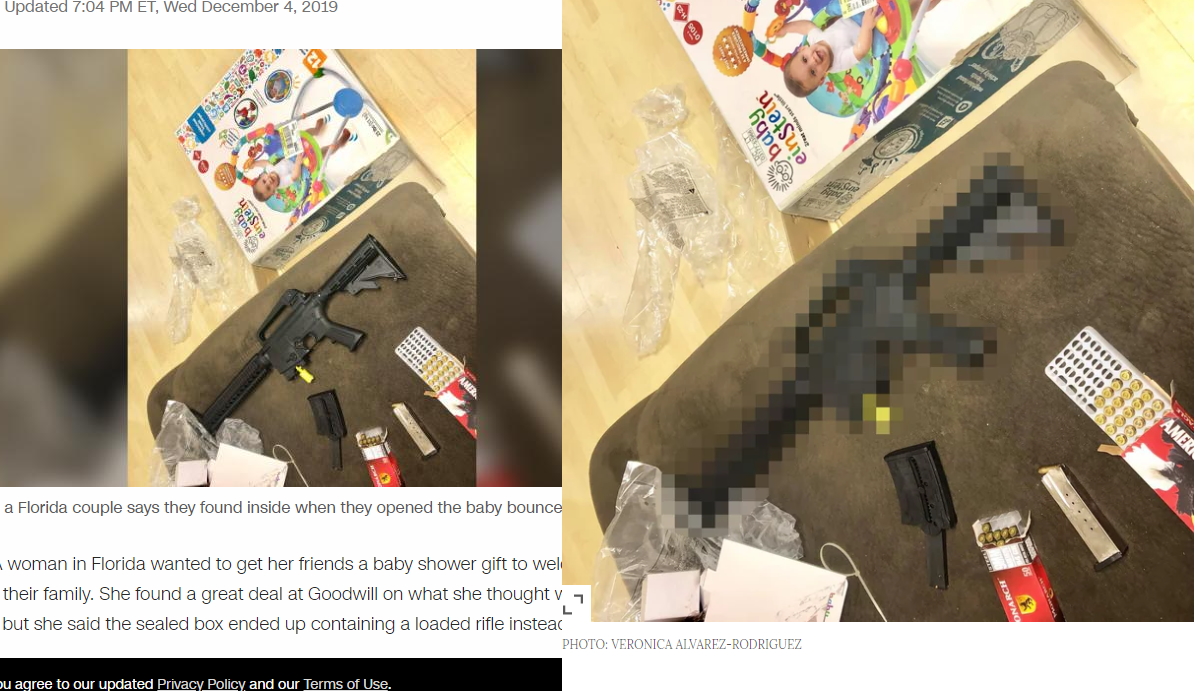 Uncensored:
A woman bought a gift at Goodwill. Instead of a baby bouncer, she says she found a loaded semi-automatic rifle inside
https://www.cnn.com/2019/12/04/us/rifle … index.html

Further down the rabbit hole, why are the magazines and ammunition not censored?

Corner to corner? Perspective might be making the box look smaller.

Also linked in your article:

Pot? No. Molly? No. Southern Comfort.

Also linked in your article:

weekly reminder that alcohol is by far the most dangerous drug we casually consume for recreation. thank you.

A significant chunk of collision fatalities in the US are alcohol-related.

overdosing isn’t exactly the issue with alcohol. it takes an awful lot and a hardy stomach to technically overdose. plenty of people come a cropper with booze, though.

a homeless alcoholic with a 20 units before noon habit won’t die of an ‘overdose’. don’t be dense.

I guess whatever it takes so Dilbert can go back to simultaneously posting about booze brands and complaining about drugs. Meanwhile binge drinking marches on.

I wonder when the next teetering drunkard will shoot a kid or run a family off the road. Because alcoholism is such a minor, noncomplex issue that can't be addressed because there's drug cartels and things.

How many drug users get killed by people with guns though?

Exactly, we need to get those opioid users onto lager.
Epstein didn't kill himself

i imagine it's less painful to die of an opiate overdose than a slow protracted death from cirrhosis of the liver. but hey, you can pick your own battle.

Some 21 year old rapper died of a pill induced seizure while on a private plane. That probably wasn't pleasant.

hah that's the first time I've heard it be linked to drugs, every headline is "died from a seizure"

He was popping pills on a private jet loaded with marijuana. Stupid.

As I tell my seniors "Don't do drugs. There is no high worth dying for". And then I go home and smoke myself to exhaustion.

A guy walked into a church shooting today. The church was live streaming as they always do.

"A guy walked into a church shooting" sounds like the lead up to a punchline.

I only saw that when some gun nuts were all self-congratulatory about the "good guy" stopping them. Sidebar: I know it's Texas, but what kind of church has multiple armed guards? However, people still died. Mitigating the effects of shooting sprees isn't preventing them. Is the free-dumb crowd just resigned that their best case scenario is to have public gunfights every now and then?

Disingenuous gun policy makes me think of the current approach to climate change from the same ilk. Delay, delay, delay ---- oh, it's past the critical point now. There's more guns than people, so anything that would've previous worked, won't. The planet's on track to cause all sorts of displacement and resource wars, but I'll be gone by then.