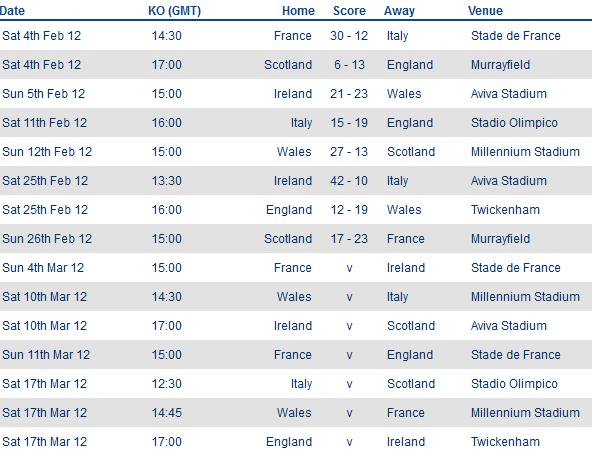 Go Wales! Be interesting to see if the English team has started to get its shit together after their godawful World Cup.
[Blinking eyes thing]
Steam: http://steamcommunity.com/id/tzyon

Go Wales! Be interesting to see if the English team has started to get its shit together after their godawful World Cup.

They played Scotland yesterday and to be fair it was a crap match, there's been a complete overhaul from the Johnson era, hopefully they won't make it work until after this years 6 nations

I don't think Wales will do too well either, it's been a very long season for the lads and it's been showing with performances for the regions recently, players are getting injured too often too, the World cup took it out of them.

the england strategy seemed to be something along the lines of high-fiving each other lots and swearing at the scots, who swore back more
Small hourglass island
Always raining and foggy
Use an umbrella

cracking game. our defense was pretty bad, and your man should have been off. did well to come back from priestlands lolkicking + score points vs that crowd lmao
Small hourglass island
Always raining and foggy
Use an umbrella

Bradley Davies just lost it, not like him, should've been a red and will be banned I reckon.

George North, what a guy!

Im not egg chasings biggest fan but what a superb match yesterday.  Hard lines Ireland, we rode out luck for a bit, but we were due some.

really good comeback by england in the 2nd half, looked like they could have been curbstomped after the italian scores. italys kicker having a shocker didn't hurt though

taken to the ~0wnz0ne~ italians

Wasn't a try for England, would have made for a terrifying last kick if it was though. Disappointed

I would let Halfpenny do nasty things to me.

Not sure if this is accessable, but its worth the 'try'.

This link will be though