Sounds like wheel bearing is out...again. it got much louder much quicker

The one that was replaced or a different one? Was it genuine OEM, 'OEM' or a blatant turkish copy?

I think I'm getting a whining from the back end, seems linked to vehicle speed so bearing or diff, doesn't seem to be a function of torque sor more likely bearing.
If I'm lucky might be a hole in the muffler, I'd be disappointed to have the OEM muffler only last 16.5 years.
#FreeBritney

Pretty sure it's the same one. It was a honda dealer I hope they used a real one

There's a chance it was misaligned or damaged on installation, or a fake.

Supply chains aren't what they used to be.
#FreeBritney

Yea I guess. Almost positive it's the same wheel bearing. It got 17k miles or so

Also the quality management of legacy spares often drops off a cliff.

Back to the mechanic then.
#FreeBritney

250 to repair. Well see how it goes Monday


I was just at the pick-n-pull scouting out some parts. Working on a computer all day it's nice to get your hands dirty with some wrenching. The parts I was grabbing were cosmetic anyway but cost $2 because it was a freakin pick-n-pull

Confirmed, prices on newer stuff are absurd here. Usually gotta go to early 80s to early 90s for a sub 10k truck for work. I think one in the fleet is old enough to be considered a classic.

It's my first and only car. Everyone else I know is on 2+

Back end is making a droning noise linked to vehicle speed and nothing else.
If I'm lucky its a bearing, if not a CV joint or rear diff.

Doesn't seem to be related to engine torque.

Car is fixed so I guess it's not a problem anymore, for now

Both of my Vornado desk fans, same model, stopped working at around the same time after a few years ownership. The one on loan to my dad was taken apart and being tinkered with, but I don't think he got it working. Just more workshop junk now.

Will probably replace with the same company. Liked the airflow.

while looking for a place to make a covid shot appointment, I found out that the walgreens site needs you to "register" to see appointment availability (cvs does not, but was booked). further investigation reveals they discontinued their old "points" systems and changed the whole thing to walgreens bucks or whatever. apparently it was opt in, and you lost your old points if you didn't switch over by a certain deadline. not sure what I had before, or if it was even enough for a pack of gum, but they are all (however few) gone now. I'm sure news of it was somewhere in the mountain of print spam that finds its way to my mailbox sometimes, but I barely ever skim that junk.

I am reminded of that one time microsoft had a limited time thing where you could upgrade your old copy of minecraft to the windows 10 edition, that I completely missed because I hadn't been playing the game or following its news in awhile.

it's probably a solid foundation for a karen origin story if I could be assed to type out a nasty review or call someone's manager. they're getting pretty hard to top these days though. I read a post where one actually found out where the manager lived and came to his house to chew him out for not giving her a discount. 50/50 if true or false, but the meme has a life of its own.

At some point (I don't know when specifically for your situation or generically for future situations), you can't assume they're going to track you down or knock on your door to get you to swap your points over. They need to do their due diligence to let the public know they're moving their stuff but hopefully the public (i.e. you) would also do your due diligence in staying on top of things if they're important to you.

If you held $100k worth of Walgreens Bucks or Stanley Nickels, you'd hopefully stay tuned into the changes of their policies.

Duh-doi, #firstworldproblems you know, (complaining about stuff that doesn't or shouldn't really matter, usually tongue-in-cheek). Anyway, it was probably in the terms that nobody reads. There's clickwrap written for expensive software I have to use where the publishers can pretty much change whatever they want, when they want, and put it in the driest, most protracted legal terms.

I wasn't exactly sitting on brand-new-car amounts of reward points from a bottle of aspirin every now and then, annual halloween candy, and hydrogen peroxide restock. Beyond trivial. $100k of idle drug store points and you'll probably have the DEA watching you from across the street. I'll do my due diligence for pennies in between the cushions if I'm ever at the unfortunate point when it's worth my time in dollars.

On my part, active thought on that stuff only goes into whether or not I want to cash them out for supermarket gas. Speaking of, I couldn't begin to tell you how many of those Monopoly tickets I have taking up drawer space somewhere. The posh clerks put little rubber bands around them. 9 times out of 10 it's just scattered over the bananas. I don't even know how you're supposed to play the blasted thing.

Which brings me to another first world problem! 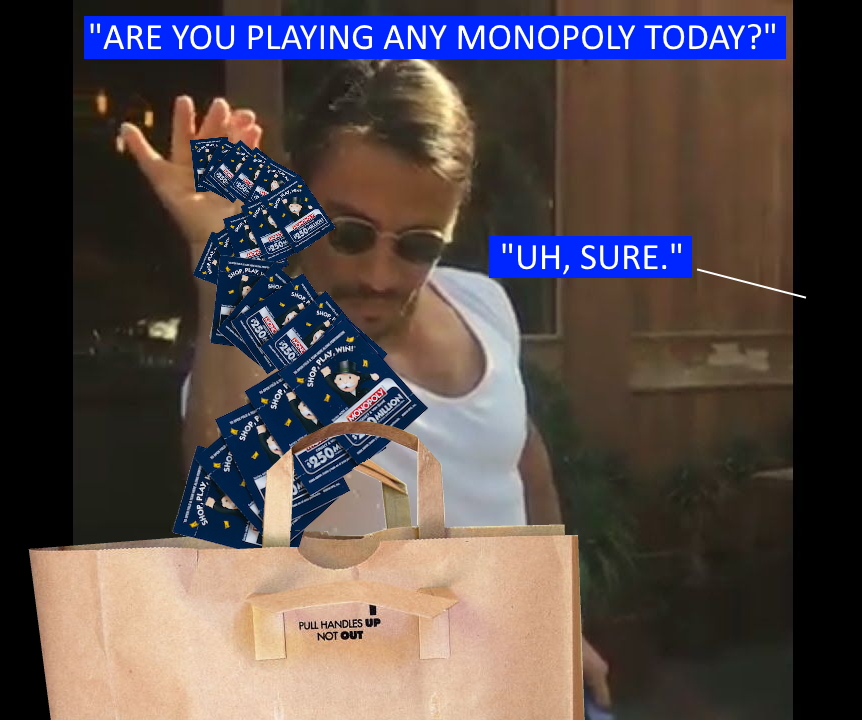 I didn't pull the trigger on the cali trip when last mentioned. There are now no nonstop flights and car rental is 135/day

Rick, i just booked a rental through my company's travel agency and the price was 1/4 of the list price. You should try that.

I could, I did also find out the flight I expected to take is still cancelled, was since last May. These other times suck

I greatly dislike having to dick around with new UIs on stuff from Androids to MS Office. I lost like 4 hours of my work day today straightening out work-related apps on my phone, with like 10 different tabs open on my desktop browser on how-tos for basic navigation that I used to know but are no longer valid. Why do I need to take some extreme workaround route through like 50 billion submenus of garbage just to LOG OUT of my email? Come on, android, it shouldn't be that complex. The logout button should just be there, in the app. But noooooOOoo, either go clear the cache or whatever or delete the email off your list. Makes total sense.

Less problematic, the screen protector wouldn't stay on this Galaxy because it kept peeling off the stupid bezel-less edge that kept activating stuff in my grip until I put the whole thing into a case. Not the end of the world, but it doesn't feel very organic or drop-safe holding your phone by its backside to do stuff. Probably not too bad strictly office, but risky in the field. What's next for the world of screens? Soda-can shape? "Every grippable surface launches something you don't want! You have time to learn a thousand new gestures, right?"

Also tired of being given phone numbers to call for stuff. Just give me the email address. If it absolutely can't be done in an email, then I'll sit through your bad corporate telephone music.

MS Moving functions from one menu to some other menu, and often to some menu which bears no relation to the function, for no reason must be the world's greatest productivity killer.

On any given day there's probably the equivalent of a small country sitting there thinking "now where the fuck has that function moved to?"
#FreeBritney

I would believe it. A huge portion of some of my days are spent working people, company or clients, through software. I end up googling a lot of it because some UIs or quirks just aren't obvious or very user-friendly. "Print area screws up when opening an old spreadsheet on new office, and nothing is displaying? *slaps forehead* just type _n into the dialog box, why doesn't anyone know that?"

IT is not in my job description. We are not an IT company. I diverted from all the cisco stuff and got out of the IT biz on purpose. Little did I know I'd still doing IT in the 2020s …

e: unrelated, I still use an old version of CS because screw subscription models.

My new camera started numbering at 8500. Idk if the store used it or what. It's rated for 300k shutter actuations so I'm not too concerned.

I need to spend $350-700 before the end of June on my credit card depending on what it is to get enough points to redeem the reward I want before other points expire. I am also temporarily 30 hours above the max paid time off at work, too, so maybe some form of vacation is in order.