Yes, most of my life.
#FreeBritney

Only when I need to see at a distance I wear them.
The irony of guns, is that they can save lives.

Someone left these three small ceramic statues in the three corners on my front property. One was the statue of the Virgin Mary, the other is a statue of Joseph, and the third is a horse.

Someone is trying to put a curse on me? I lost my wallet in my home. I think the statues stole my wallet.

maybe it was luca brasi telling you something. 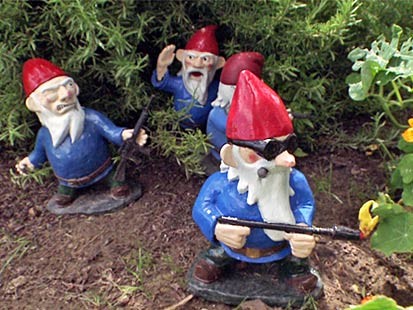 Illegally double parked large loading truck in the street. I squeezed by it and it pushed my mirror in. The mirror didn't fall off and it doesn't even look scratched. No one in the truck was around so I kept going. Since it was a giant loading truck and my mirror just got pushed in without damage, I probably didn't even hurt the truck? I doubt the loading people would even notice a small ding or scratch in their large truck.

I am probably cool right?

And yes, I could have been more careful but you also shouldn't double park on a busy street.

Does anyone here wear glasses? I think I may need them. The ends of the long school hallways are a bit blurry. I can't see the kids faces too well like I used to.

The eye doctor said I should start wearing glasses when I drive yesterday. I can now see her point.

The vet gave the cat sedative to calm him down after a stomach upset.

Now he's been awake for 24 hours and is staggering around with eyes like saucers.
Whatever it was I don't think it was a sedative.
#FreeBritney

Giving drugs to animals is the funniest thing in the world. I can watch dogs high on YouTube for hours.

Thanks but I don't take drugs
#FreeBritney

Thanks but I don't take drugs

except alcohol of course. which we have biologically ‘adapted to’, apparently.

Oh god, did I give an opening to the 'pale ale is equivalent to crystal meth' argument.
Sorry.
#FreeBritney

i don’t think i’d ever claim that, as seemingly i am the only person actually interested in the real scientific and medical knowledge on the subject. sorry that your own pet vice and drug of choice is harmful and poisonous to the individual and hugely costly to society. i can’t ameliorate those facts for you. keep heaping all your fears on those dark shadowy drug-use taboos though!

I wonder if it is possible to use meth or crack recreationally like someone would only have a drink or hit the bong on the weekend. It has to be up to the person right?

Why don't you try it? Its no more dangerous than a Mai Tai and you'll develop a whole new social circle.
#FreeBritney

I am pretty proud of the fact that I cut almost all of the hard drug users out of my life and wouldn't know where to get some hard drugs if I genuinely wanted them.

Well there you go again, putting people into brackets because of the choices they make.
Crack addicts are no worse than people who have a couple of margaritas on a Friday night.
#FreeBritney

That reminds me of a few friends from high school who passed away from drug abuse. High school spring break and they were smoking crack outside of a house party. When asked why the hell they were doing that, the first one to pass away said "we can smoke crack on spring break".

Well there you go again, putting people into brackets because of the choices they make.
Crack addicts are no worse than people who have a couple of margaritas on a Friday night.

you are either giddy with joy or suicidal. There's no in between and nuance means nothing.

you are either giddy with joy or suicidal. There's no in between and nuance means nothing.

Did you mean me or what being on crack feels like?
#FreeBritney

I mean your complete misunderstanding of what uzique has said re: drug impact on your body and brain. You really either are a complete imbecile or being willfully ignorant.  I'd like to think you are smarter than your comments here suggest, but at this point i just don't know.

Anecdotally I've seen plenty of people destroy themselves with drugs, drink not so much, and there seems to be little data to suggest drugs have any positive effect so I'm OK with saying a drug habit is worse than a drinking habit.
#FreeBritney

Not to be that guy, but alcohol is still a drug. What's the worldwide industry worth now? 1 trillion? 2?

anecdotally, lmao. yeah not many people destroy themselves with alcohol, it's true -- it's not like it's far more toxic than MDMA, LSD, weed, and most other drugs, and far more addictive.

Alcohol is a prominent commodity in the UK marketplace. It is widely used in numerous social situations. For many, alcohol is associated with positive aspects of life; however there are currently over 10 million people drinking at levels which increase their risk of health harm. Among those aged 15 to 49 in England, alcohol is now the leading risk factor for ill-health, early mortality and disability and the fifth leading risk factor for ill- health across all age groups.

In recent years, many indicators of alcohol-related harm have increased. There are now over 1 million hospital admissions relating to alcohol each year, half of which occur in the lowest three socioeconomic deciles. Alcohol-related mortality has also increased, particularly for liver disease which has seen a 400% increase since 1970, and this trend is in stark contrast to much of Western Europe. In England, the average age at death of those dying from an alcohol-specific cause is 54.3 years. The average age of death from all causes is 77.6 years. More working years of life are lost in England as a result of alcohol-related deaths than from cancer of the lung, bronchus, trachea, colon, rectum, brain, pancreas, skin, ovary, kidney, stomach, bladder and prostate, combined.

The public health burden of alcohol is wide ranging, relating to health, social or economic harms. These can be tangible, direct costs (including costs to the health, criminal justice and welfare systems), or indirect costs (including the costs of lost productivity due to absenteeism, unemployment, decreased output or lost working years due to premature pension or death). Harms can also be intangible, and difficult to cost, including those assigned to pain and suffering, poor quality of life or the emotional distress caused by living with a heavy drinker. The spectrum of harm ranges from those that are relatively mild, such as drinkers loitering near residential streets, through to those that are severe, including death or lifelong disability. Many of these harms impact upon other people, including relationship partners, children, relatives, friends, co- workers and strangers.

In sum, the economic burden of alcohol is substantial, with estimates placing the annual cost to be between 1.3% and 2.7% of annual GDP. Few studies report costs on the magnitude of harm to people other than the drinker, so the economic burden of alcohol consumption is generally underestimated. Crucially, the financial burden which alcohol-related harm places on society is not reflected in its market price, with taxpayers picking up a larger amount of the overall cost compared to the individual drinkers. This should provide impetus for governments to implement effective policies to reduce the public health impact of alcohol, not only because it is an intrinsically desirable societal goal, but because it is an important aspect of economic growth and competitiveness.

but anecdotes are cool. do all engineers work by anecdote?