Thanks for your thoughts Uzique and Newbie.

I am teaching Japanese Internment this week. Is it okay for me to tell the kids it was the only bad thing we did in the war? Can I call the camps concentration camps?

For your job's sake, you should probably stick to your district rules and whatever it is the curriculum has to say about it, but maybe provide a reading list for extra credit. Are you free to design your own extra credit?

Dealing with angry parents is probably going to be a reality no matter what. You can't please everyone.

I think you're smart enough to find a way to present facts in a clear and concise way without showing personal bias. Presenting something as "this happened in the past" without providing historical context and motivating factors is teaching a factoid to students, not encouraging them to analyze and apply critical thought to history.

Doing just this will infuriate some parents. As neutral as you can, if it doesn't fit their reality and alternative facts, they will complain. C'est la vie.

I am teaching Japanese Internment this week. Is it okay for me to tell the kids it was the only bad thing we did in the war?

It was the nicest thing the US did in the war, they're lucky they weren't put in lagers around Trinity to see what would happen to them.
Русский военный корабль, иди на хуй!

he’s referring to the widespread internment of japanese americans i presume, not war captured.

go on then, why was throwing hundreds of thousands of japanese non-combatants, a large proportion of whom were legal american citizens, into concentration camps ‘just the best thing ever’.

you’ve got the attention you crave. now do a trick puppy!

It was better than nuking them, dur.
Русский военный корабль, иди на хуй!

Why would you put them in internment camps?
Русский военный корабль, иди на хуй!

maybe in about 3 pages of dilbert-brand obtuseness and boorishness you might get somewhere close to making a point.

might i recommend a first-year introductory history course? it would teach you to put together arguments, cite sources, substantiate claims.

I'm familiar with history, it mostly happened in the past and therefore doesn't matter too much.
Русский военный корабль, иди на хуй!

I'm familiar with history, it mostly happened in the past and therefore doesn't matter too much.

No you are not and yes it does matter. Things that happen shape society and human life.

I'm not sure what point you were "really" making about the Japanese-Americans being sent to camps but no, it was not the "nicest thing the US did during WW2." For crying out loud, Dilbert, your hot takes are distressingly unanalytical. Please step out of character for a second and tell me you're 100% trolling.

lol at someone who buys almost exclusively and only history books, who wants to make pained analogy to nazis, or ww2, or china, whenever he can, claiming that 'history is pointless' whenever he's asked to actually substantiate something.

Moving on, Japanese interned in America were lucky they weren't raped and herded into the sea to be machine-gunned, or the women used as sex-slaves and the men worked to death cutting railways through the tropics, or used as guinea pigs in biological weapons experiments.
Русский военный корабль, иди на хуй!

History is pointless but boy-howdy, let me tell you about the Jews.

Moving on, Japanese interned in America were lucky they weren't raped and herded into the sea to be machine-gunned, or the women used as sex-slaves and the men worked to death cutting railways through the tropics, or used as guinea pigs in biological weapons experiments.

so america shouldn't examine it's dodgy record on human rights and the way it treated its own citizens, because they weren't committing genocide or behaving like an imperial expansionist state?

lol. bad take, sorry. a democracy should hold itself accountable to its own self-proclaimed democratic standards, according to its own laws.

what was the war being fought for, exactly, if everyone would be equally happy to commit ethnic cleansing and rape and slaughter?

Dilbert, you're moving the goal posts. The imprisonment of Japanese-Americans being "the nicest thing America did" has mutated into Japanese-Americans being lucky they weren't machine-gunned in the water. Great, but their lives were still uprooted, they were robbed blind, cleaned out, and imprisoned without due process or a trial. The US was pretty unapologetic about it too.

It'S AlL In ThE PaSt!

yes thanks for that, japan had a motivation to expand beyond enjoying putting manchu babies on bayonets. who'da thunk it?

the democratic allied powers still contended the war on ideological grounds, as a war against fascism, totalitarianism, and so on. of course nobody goes to war over conflicting ideas alone: that's called a debate club. but the point still stands. i presume those second or third generation japanese-american citizens emigrated there in the first place because they wanted a part of that 'democratic' experiment, 'the city on the hill'-type stuff.

being thrown in a camp when you've been american for 30 or 40 years would probably give you reason to question the 'freedom and liberty for all' stuff that america was selling. equally, i'm not sure why you're implying that japanese-americans ca. 1940 had some sort of ethnic or racial 'responsibility' for the crimes of the japanese imperial forces.

america being a country substantially composed of emigrants fleeing persecution from elsewhere, your comments saying that japanese-americans ‘had it good and got lucky’ is a bit bizarre. give me your tired, your weak, your poor, your hungry ... and we will arbitrarily decide to throw you into a concentration camp in several generations time!

Some Japanese-Americans were such die-hard American patriots that they still joined the US military to fight for the allies. The camps are such a grotesque scar on American history. Hearing Dilbert, a non-American and an immigrant himself, wave it off as "oh it's in the past and it could have been worse, let's not talk about it. Move along" makes steam come out of my ears.

fear, suspicion and mistreatment of foreigners was of course a general problem in the UK too. lots of naturalised germans had a hell of a bad time of it. it’s something we rightfully regard with a small measure of shame.

lots of conscientious objectors and natives were treated terribly too. only in recent years has historiography really started to give these groups a fair airing. for generations they were slandered and not talked about. there were de facto concentration camps in places like wales full of ‘COs’ who were thoroughly shamed by society.

any country claiming to be democratic and based on principles of liberty and freedom should probably do a little bit of historical auditing from time to time and think again about its moments of illiberality.

The redress campaign wasn't just about trying to gain monetary compensation. I mean, you figure three years of imprisonment and the 30 years of guilt and shame we lived with, $20,000 wasn't going to abrogate all of that. But the money was part of the message. The American public didn't give a damn until the minute we started demanding compensation.

As a leader of the redress campaign, you spoke on radio programs about Japanese American internment. How did audiences react to learning about what happened in the camps?

There was a huge hostility against us because people assumed that we were guilty of something—that we betrayed the United States, the country of our birth. People would say, "Oh, you're lying. Those camps never existed." Or they would say, "The government did what they did because they had good reason to do it." Because obviously in America, we don't put people in prisons unless they're guilty. Well, we've discovered that's not necessarily true.

It was all based on racism and had nothing to do with fact. And the one thing no one ever could present to me—either officially or people calling into talk shows—was any piece of evidence that would justify what happened to us. The reason they couldn't do that was there was no evidence [that Japanese Americans were guilty of treason].

The day after 9/11, the JACL published a letter warning the U.S. not to racially profile Arab and Muslim Americans. Specifically, you urged Americans "not to make the same mistakes as a nation that were made in the hysteria of WWII following the attack at Pearl Harbor." Why did the JACL anticipate this reaction?

For Japanese Americans, there are certain parallels that were apparent between [the attacks on Pearl Harbor] and 9/11. We were being attacked on our own soil for the second time. There was an enemy who could be identified, and individuals living in this country resembled the terrorists. In our case, the attack was by Japan and we were an ethnic group who resembled the attackers.

I would hear people say things [about Arab and Muslim Americans] that were similar to what I was heard about us. "There is no way we can identify those who are potential terrorists"; "You've seen what terrorists can do, and here are these people who are walking around free. How do we know they're not going to bomb us?"

From our experience, we knew that fear overcomes reason very easily. I don't think there was an American on 9/11 who didn't feel a sense of fear, including those who are Arab and Muslim. But they had to fear something else that other people didn't have to, and that was the wrath of the American public.

Meanwhile, #45 wanting to put an end to "negative, 'unpatriotic' talk" about US history in US classrooms.

it’s also hilarious that dilbert is gloating about the ‘awesome’ treatment meted out to legal japanese-american citizens but at the same time wants to make out that china are a unique and monstrous evil because, among other things, they have targeted a particular ethnic group and put them in concentration camps.

just as there may have been a small number of japanese imperial spies or sympathisers, there have been small numbers of uighur separatists/terrorists. you have no problem joining in the chorus of disgust about the chinese camps but, because you’re essentially a racial troll, the american camps were THE BEST THING EVAR!

Imagine the US throwing every American who ever sympathized with the Nazis into camps the moment the US entered the fray. LMAO. 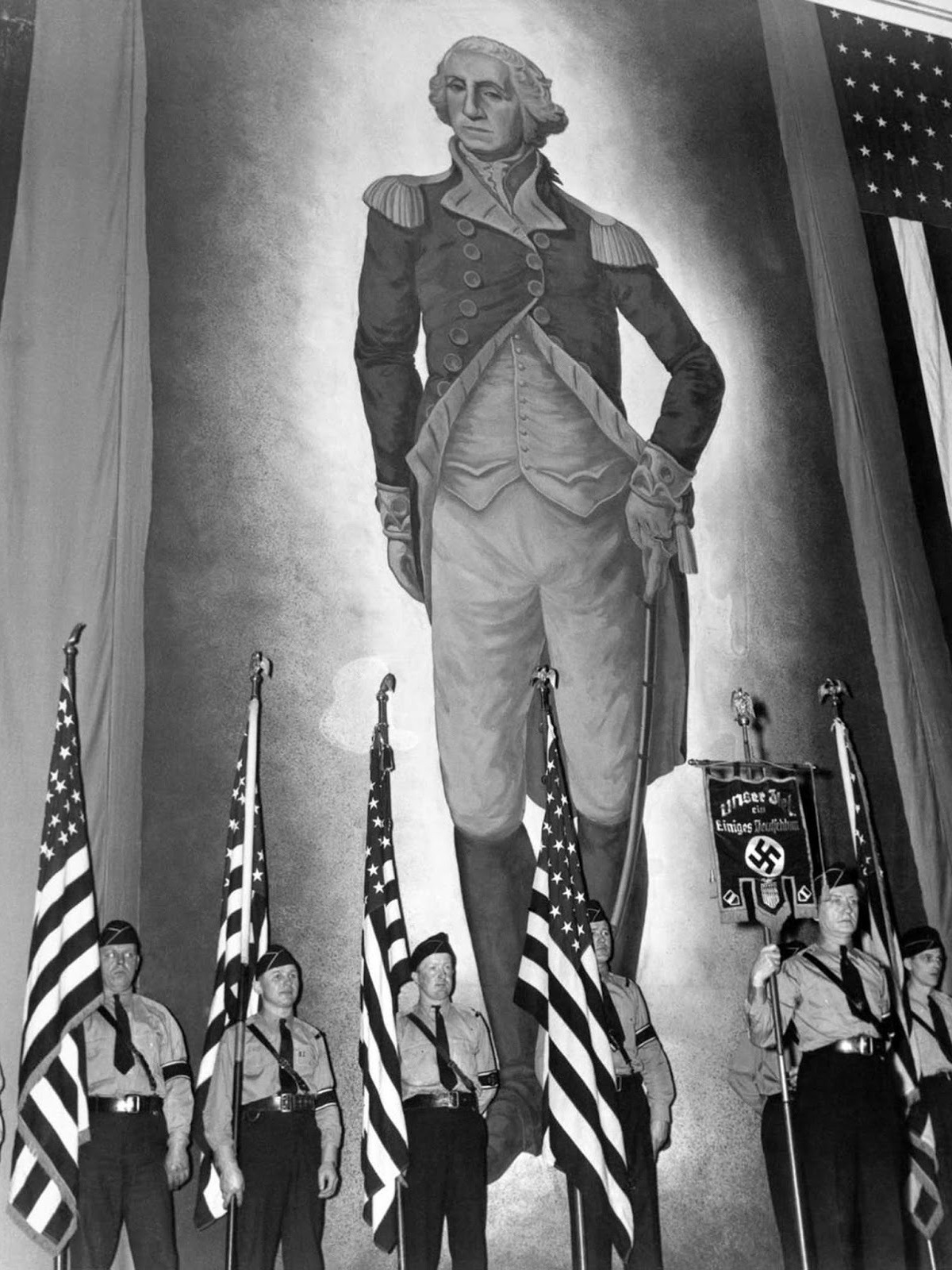 those damn japs should be grateful we didn't make them drink typhoid water from iwo jima!!!

What a motley crew. Lots of distance variables between the tips of those ties and their belt buckles. For goodness sakes they look like a comic strip.

Certainly no sharp image of the master race here.