erm, presumably the person who has been convicted of sedition will be 'banned from speaking in public' when he's in a federal prison. so, yes?.

Probably not, no, I'm sure he will be able to say what he likes through third parties, on the phone etc.

dilbert why are you struggling with this concept of a 'private space subject to government regulations'? this applies to, erm, almost all the examples you have listed in your counter-argument. like pubs.

No, there's no right of entry, or freedom to say what you like in a pub, or twitter. If the owner takes a dislike to you you're out.

What you seem to be demanding is to treat twitter etc as a public forum, except for people you don't like - they're muted and excluded obviously.
Русский военный корабль, иди на хуй!

Probably not, no, I'm sure he will be able to say what he likes through third parties, on the phone etc.

erm, so what? trump is free to continue communicating on his own channels too. what is your point here?

once again -> never in support of banning trump, or anyone else, because 'opinions differ'.

someone being kicked off an influential comms platform because they're inciting people to break and enter property, cause harm and death to humans, and interrupt democratic process ... i don't have a problem with that. that's pretty far away from 'shut him up! he doesn't have the same politics as me!'

i can already mute, block, and 'exclude' anyone i want from my twitter feed. if i was so precious and that was my concern, being in my own political echo-chamber with the *checks notes* woke liberal lefty twitter intelligensia: they already have fucking features for that. jesus christ.

as always, with you, you cling to free speech mostly so that you can continue to promulgate racist hate speech without fearing for your job. good luck with that. the good news is elon musk has a new space just for you!

So what exactly is it that you're on about griping about Musk running twitter?
Its a private platform, he owns it, he can ban anyone he wants - isn't that what you wanted?
Or do you want the govt to step in and decide what a private company can and can't do with its assets?
Русский военный корабль, иди на хуй!

i think you're confusing my statements with larssen's, here.

my problem with musk running twitter is that he says he's acting in the interests of free speech and creating 'a future forum for humanity', when in reality he is barely concealing his own naked class interests and is using it to push conspiracy theories, toxic agendas, and interfere in political process. he has already taken a much more politically active role than any previous twitter CEO, openly endorsing candidates in the mid-terms.

is that your version of the ancient greek forum, dilbert? one owned by a rich narcissist who keeps using his privileged admin-level reach to try and influence elections? ok good job.

again, this has very little to do with me desiring anyone to be censored because of their personal political opinions. you need to think a little harder.

s that your version of the ancient greek forum, dilbert? one owned by a rich narcissist who keeps using his privileged admin-level reach to try and influence elections?

You're the one equating twitter with a greek forum, no idea where you would get this idea from.
Its more akin to a privately owned pub where people go to yak.

From there all your arguments make no sense

one owned by a rich narcissist who keeps using his privileged admin-level reach to try and influence elections?

He owns it, he can do what he likes with it.
Русский военный корабль, иди на хуй!

This circles back of course to big social media wanting the power of msm but none of the responsibility. Also, there are laws and regulations a company can run afoul of that being an owner will not help you with.

he's the one making lofty ambitions for it, dipshit, you are the one who keeps talking about this ideal of free public speech that doesn't exist anywhere under any jurisdiction on the planet.

isn't it weird how you always make the whiffiest of arguments to excuse billionaires and far-right nasties? you really do like expending a lot of circuitous effort on populist flummery, don't you?

He owns it, he can do what he likes with it.

doesn't the same apply to murdoch's media empire? cable tv? tabloid newspapers? all under private ownership – so they should be able to print what they like, true or false, peddle conspiracy theories, dangerous or not, try and influence elections (as all press barons in modern history have indeed tried to do), etc.? this shouldn't concern the state or powers that be at all? just a private owner doing what they like with 'their assets', right?

who cares if tabloid papers with the biggest circulation and readerships nationwide print highly damaging smears or peddle vicious conspiracies in the run-up to an election? it's just a very talented, very rich man doing what he wants with his personal creative outlet!

Musk/twitter don't create anything - Its a chat forum

News media is a bit different, the owner is responsible, determines policy, editorial direction etc.
They are free to print what they like, and they can be sued - thats the balance.
Русский военный корабль, иди на хуй!

well this is rather precisely everyone's point, which you handily keep denying.

social media companies do overlap an awful lot with 'the fourth estate' (sometimes it's even called 'the fifth estate'), which, as i just said before, has a big institutional role in forming the boundaries and norms of 'public discourse' and 'free speech', with its declared and implicit codes and rules. there is such a thing as journalistic ethics, no matter how traduced the profession has become in the great populist whinge.

twitter isn't 'just a chat forum'. world leaders communicate directly to their polities there, as do elected representatives. news media organisations and investigative journalists present breaking news there. people organise rebellions and sites of resistance there, against oppressive regimes. you are again being naive and obtuse.

similarly to facebook. yes, it was once just a place to keep up with friends and compare photos. but then the news feed started pumping political news into the home page. facebook's advertising spaces to the sidebars of the newsfeed, which are never clearly declared as such, started feeding users' eyeballs with politically charged material. your average boomer doesn't read political journals or get their dose of democratic debate from the ancient greek forum, dilbert. they form their opinions – generate their outrage more like – thesedays on those innocuous 'just a chat forum' sites you talk about.

all this is very consequential and it does overlap with 'the traditional media'. if it was 'just a chat forum' owned for fun by a playboy billionaire, why would the russians and chinese, etc, have spent so much time and effort on running bot-nets there? clearly it is now part of that general activity that we call 'the public sphere'.

You still seem unable to come up with some model for ownership and regulation.
Русский военный корабль, иди на хуй!

sorry; was it my job? the EU are busily working on it, don’t worry, little soldier man.

Social media companies can be held responsible for fostering an environment where damaging (and criminal) content thrives. 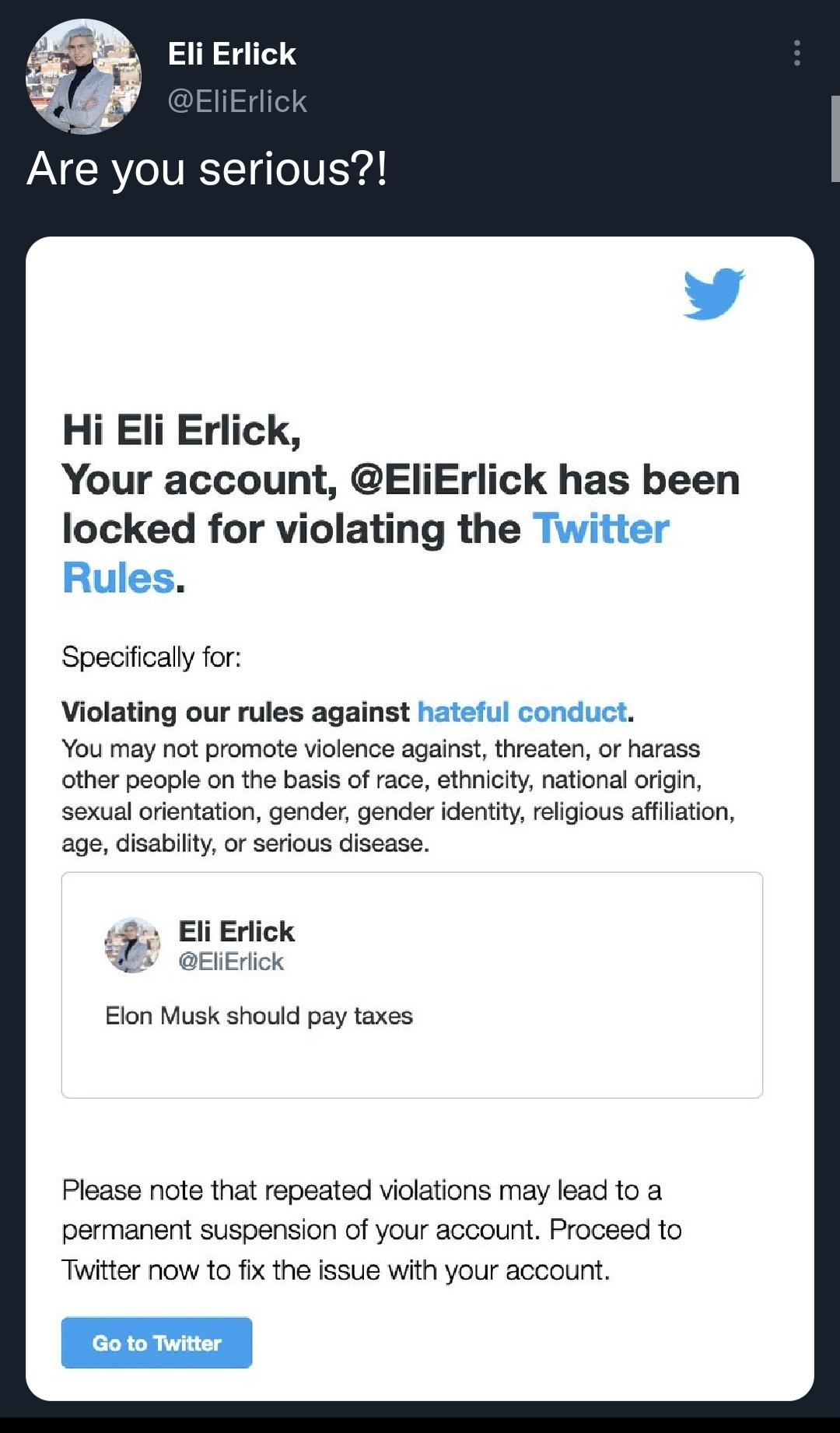 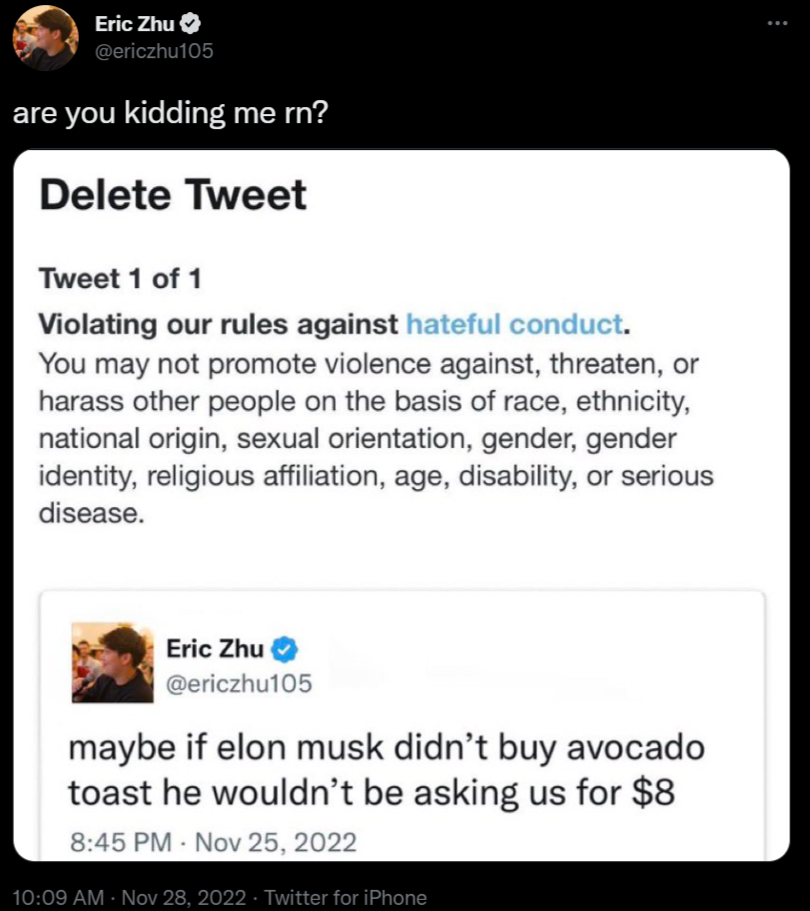 sorry; was it my job? the EU are busily working on it, don’t worry, little soldier man.

The EU busily works on a lot stuff - thank god you'll still be able to get twitter in the UK
Русский военный корабль, иди на хуй!

Before Elon Musk bought Twitter, slurs against Black Americans showed up on the social media service an average of 1,282 times a day. After the billionaire became Twitter’s owner, they jumped to 3,876 times a day.

Slurs against gay men appeared on Twitter 2,506 times a day on average before Mr. Musk took over. Afterward, their use rose to 3,964 times a day.

And antisemitic posts referring to Jews or Judaism soared more than 61 percent in the two weeks after Mr. Musk acquired the site. 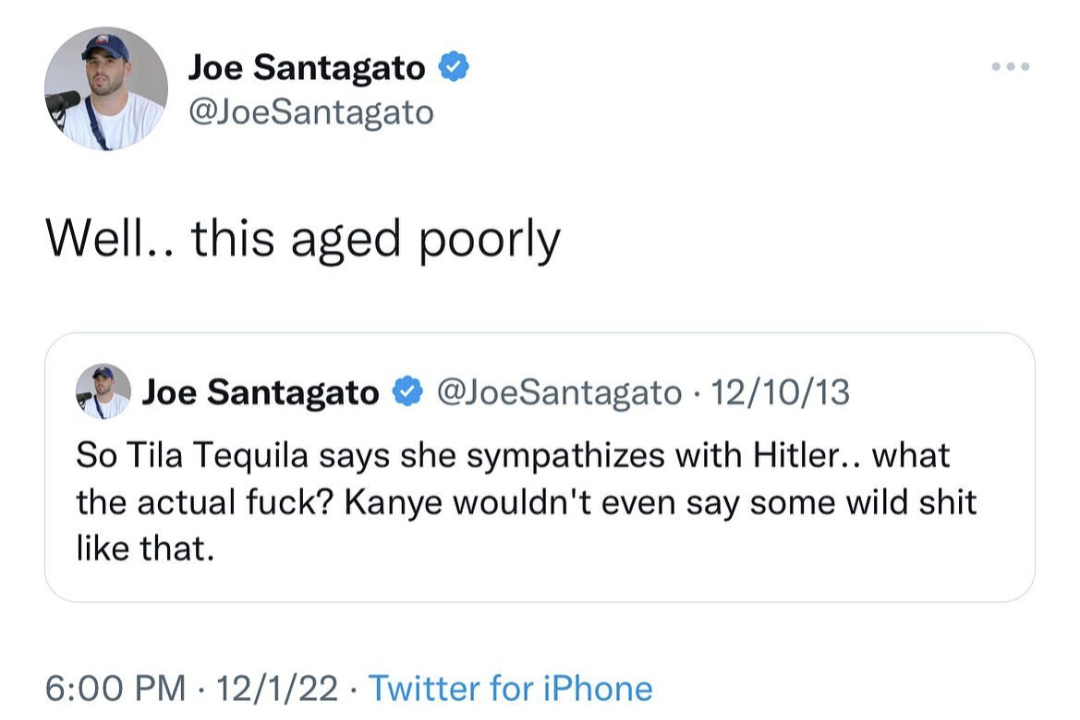 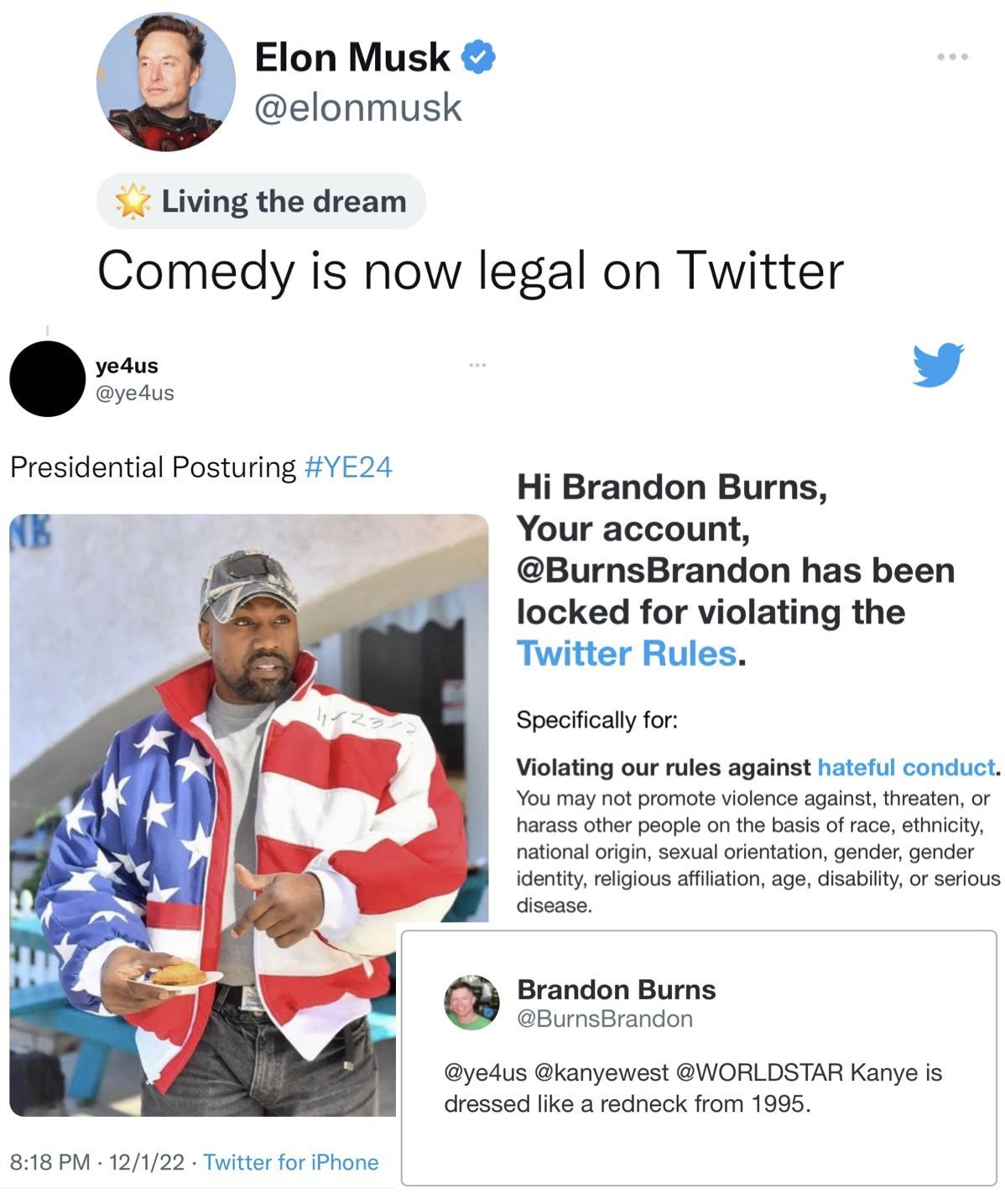 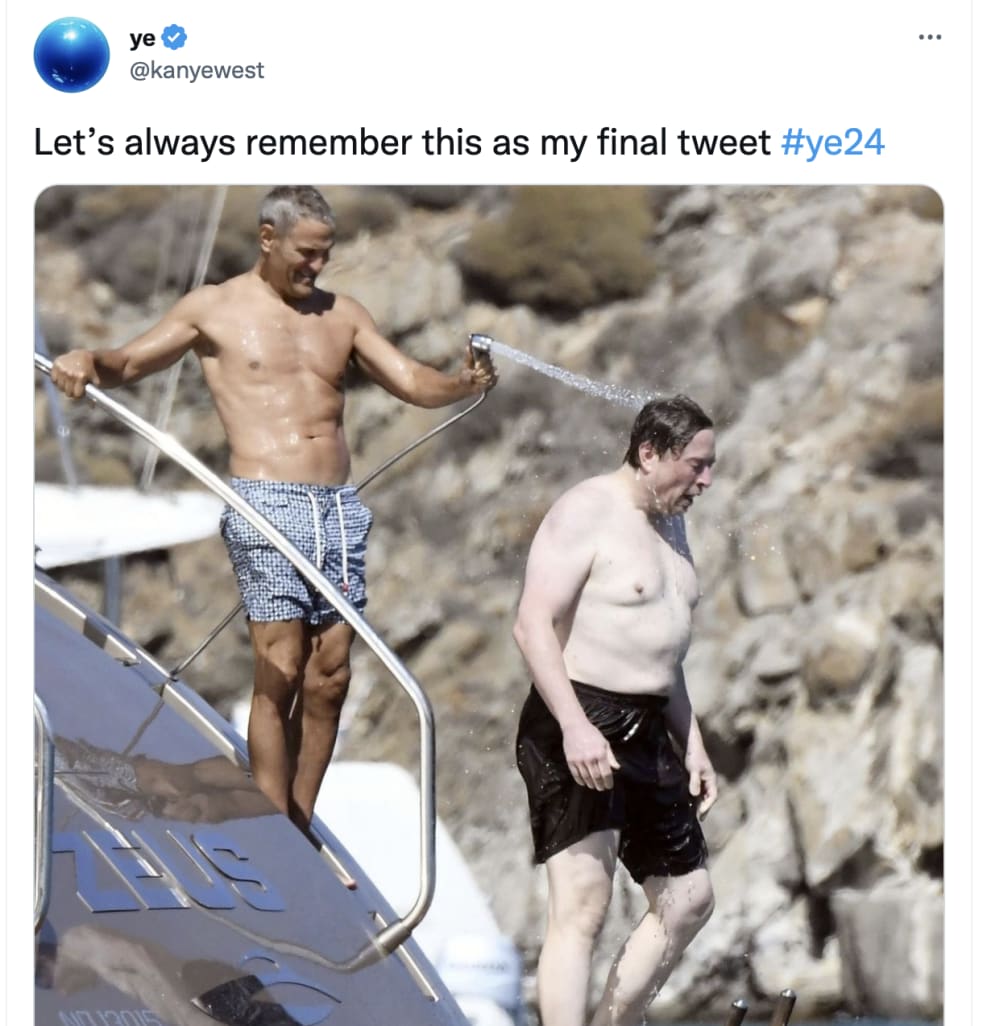 They pushed back the Real ID another 2 years. It was initially mandated in 2005. Over half my life they have been trying to implement this and still less than 50% of Americans have it.

I don't have the paperwork to get a Real ID. I will have to get it mailed to me. They should just get rid of it at this point.

Don't have the paperwork? Here all it took was a certified copy of my birth certificate.

Just get a passport if it's such a big deal.

I forgot this was even a thing. Anyway: papers, please. 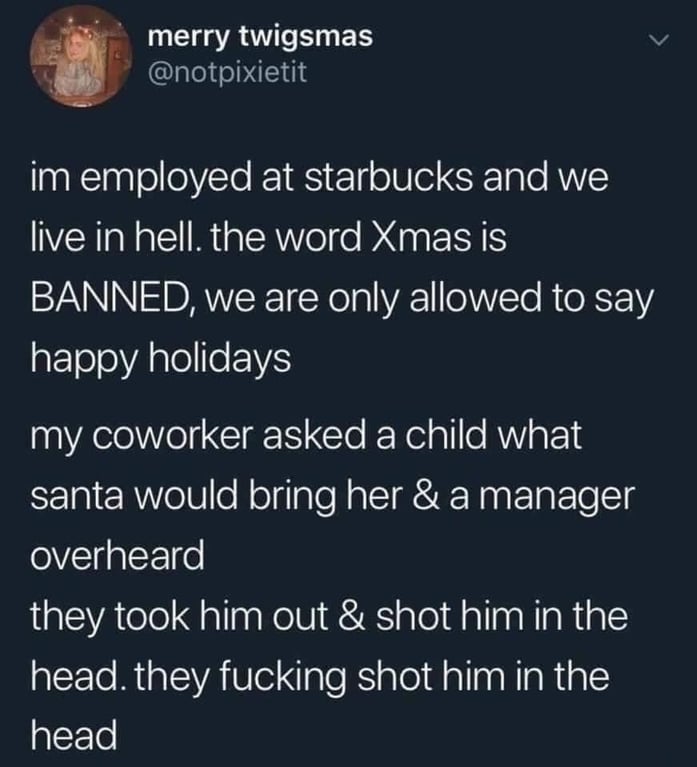 It's funny because they only do that to union organizers. 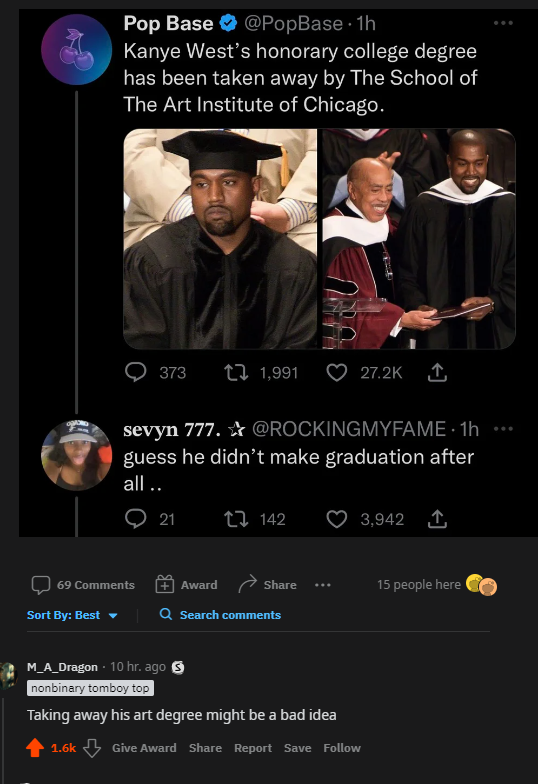 there is something so fucking sad yet hilarious that this is the way he’s helming a major social media site. lol.