Imagine if January ends with a resurgence of Occupy Wall Street after the Capital Hill thing on the 6th. What a month.

I get that social media people purposely wiping out hedge funds by destabilizing corporations isn't good for the economy yadda yadda. But it is embittering that trading platforms are trying to put a stop to the whole thing since the wealthy always come first in this country.

The large financial companies have been milking the shorting thing forever.

Fuck them to hell.
Epstein didn't kill himself

So it nose dived today from 480ish once Robin Hood and others put a hold on it. Robin Hood and others announced they were releasing the blockade on it and the temp block was to make sure that accounts buying on margin had the liquidity to cover it. After hours it is way up which is unusual since after hours it was down yesterday. The retards on /r/WSB (that is what they call each other, retards) are planning to push it hard tomorrow and dump their Friday paychecks into it. I wouldn't be surpirsed if they pull off running it up again.

Nah, GME is done. BB or AMC is next. Timing will be 2 weeks from now for the migration, approximately. I'm not American and don't options trade in my cash accounts, but I'd be looking at BB OTM calls with a strike date about 3 weeks from now. I bet the premiums are nuts. Or just sell those options and hedge, make money on the volume. Whatever.
The shape of an eye in front of the ocean, digging for stones and throwing them against its window pane. Take it down dreamer, take it down deep. - Other Families

I don't think BB or AMC is going to catch on. People have been pushing those along so far and it hasn't taken off like GME did. Frankly, I don't expect something like this to happen again. Reddit isn't going to let /r/WSB put together stock manipulation brigades even though there will be plenty of people to try one. I do expect some QAnon/WikiLeaks scam to take off among right wingers.

That'd be awesome to see. Good idea--I need to sub some of those boards. I'm all in for the spiral into the vortex at the center of each sentence's period end.
The shape of an eye in front of the ocean, digging for stones and throwing them against its window pane. Take it down dreamer, take it down deep. - Other Families

BB has support people made post about it being undervalued. AMC and NOK were labelled as diversions though AMC said they won't go bankrupt and there was talk about Nokia and 5g contracts or something. Who knows what will happen. All had big bumps then dropped

Wasn't one of the main WSB Gamestop guys pushing that it's actually a good company despite all evidence that it's not? It's all well and good that things worked out in their favor this time, but color me skeptical about the next big financial hot tips from redditors. The normies are even in on it now, as well as far too many people just finding out what short-selling is.

You tell me who's problem this is.

Sorry, I should be less opaque to actually support a discussion. What I mean to say is you don't get to ask for it, and then when it happens claim that's not what you meant. It doesn't work that way, in sane conversations, anyways.

The only thing that is regrettable is that /u/DeepFuckingValue put up horrible DD to convince less sophisticated investors that GME was viable for the short to medium term. There's a video of his face, and he's the guy who will take the fall for this, even though the DD was publicly posted for conversational purposes, and no different an effort at stock manipulation than the Hedges getting on the news telling people the positions they have shorts on to suggest those companies are failing. It is the same. The playbook got used by a retail investor, and they executed well enough to get critical mass to exploit a float volume issue in shorted low-value high-visibility stocks.

It looks bad, but for real, this is fair play. I stand by that.

Also, in the interest of full disclosure so you know where I'm coming from, I've been an active member of WSB for about 3 years. And for what it's worth, the media's hot takes on the culture there are hilariously inaccurate, willfully or ignorantly. Of course, the owners of those media companies might have something on the line here. I don't know for sure, but I have a guess.

EDIT - I am so tired I posted my response in the wrong thread somehow. Apologies to DF, who I thought had deleted his above post. Turns out I'm just an idiot.

That is where things were when Robinhood was front-running trades (selling trade instructions to brokers so they can buy at a slightly lower price, often pennies, to squeeze value through huge volume. For reference, this is 40% of RH revenue stream).

There is already a class action from the RH investors over this. The US congress wants a commission hearing.

We're only starting to wade into what wealth inequality means in the modern world. People are suggesting it's a prisoner's dilemma for the poor where they will turn on each other. These suggestions are misguided, because if you understand the assumptions of the prisoner's dilemma, you know that necessary to the metaphor is the inability of the prisoners to communicate and optimize win-win scenarios. Social media is that communication in our case here. WSB is done, but what are they going to do? Shut down Reddit? Facebook? Instagram? This is that big a problem.

EDIT - If that's not clear, here's a video that explains exactly what happens when the prisoners can talk:

Wasn't one of the main WSB Gamestop guys pushing that it's actually a good company despite all evidence that it's not? It's all well and good that things worked out in their favor this time, but color me skeptical about the next big financial hot tips from redditors. The normies are even in on it now, as well as far too many people just finding out what short-selling is.

Yes because they got the guy who turned chewy.com around and wants to refocus gamestop to online

I happened across it when it kicked off. Gamestop reported 300% increase in e-commerce sales. 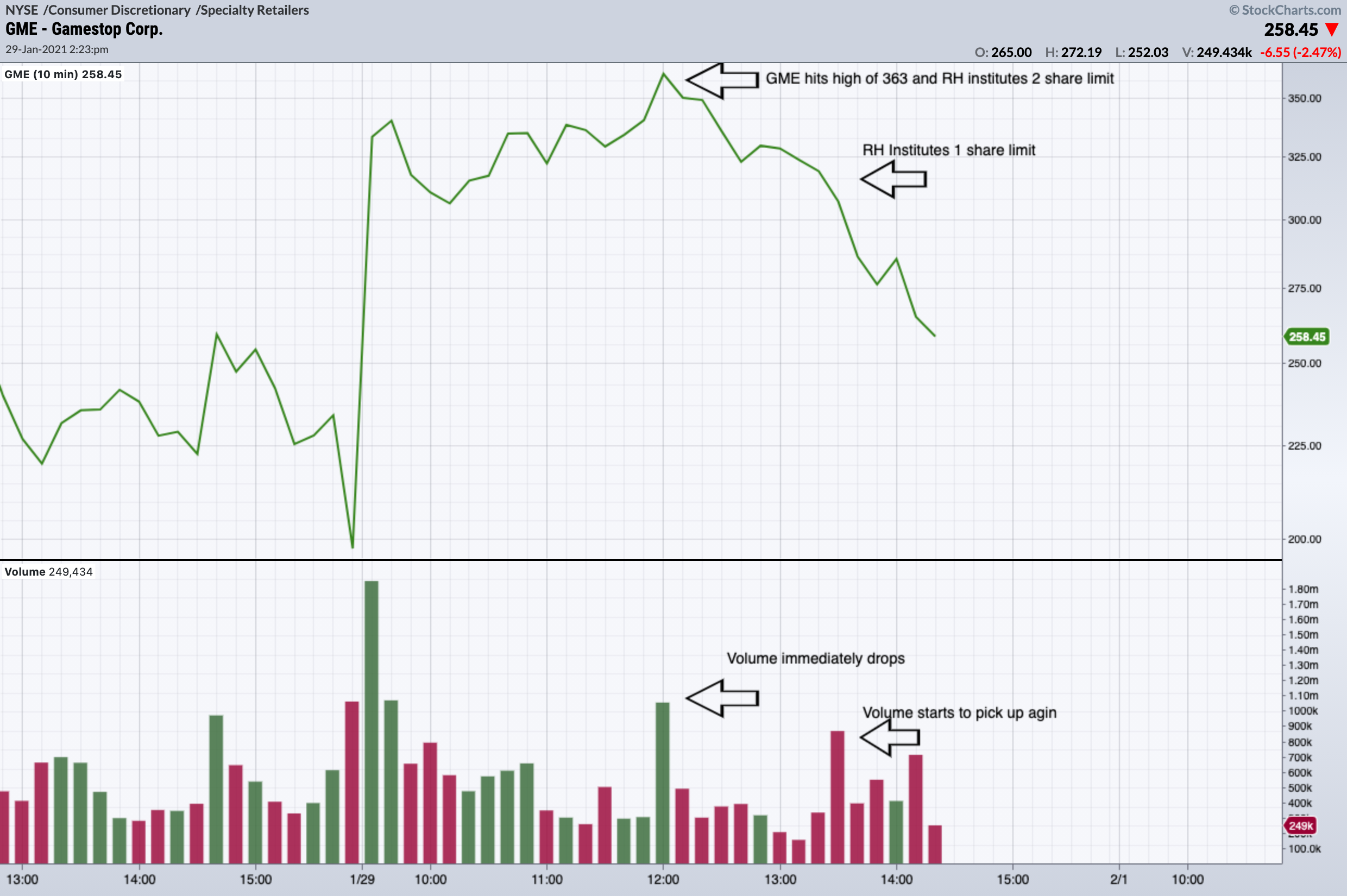 I only have two shares that I plan to hold onto into the ground unless it crazy spikes which I doubt. I will consider the losses as makeup for a lifetime of political campaign contributions I never made. I just hope in some small way to contribute to market instability, congressional investigations, and other financial services drama.

Apply for a bailout if your two shares crash into the dirt. 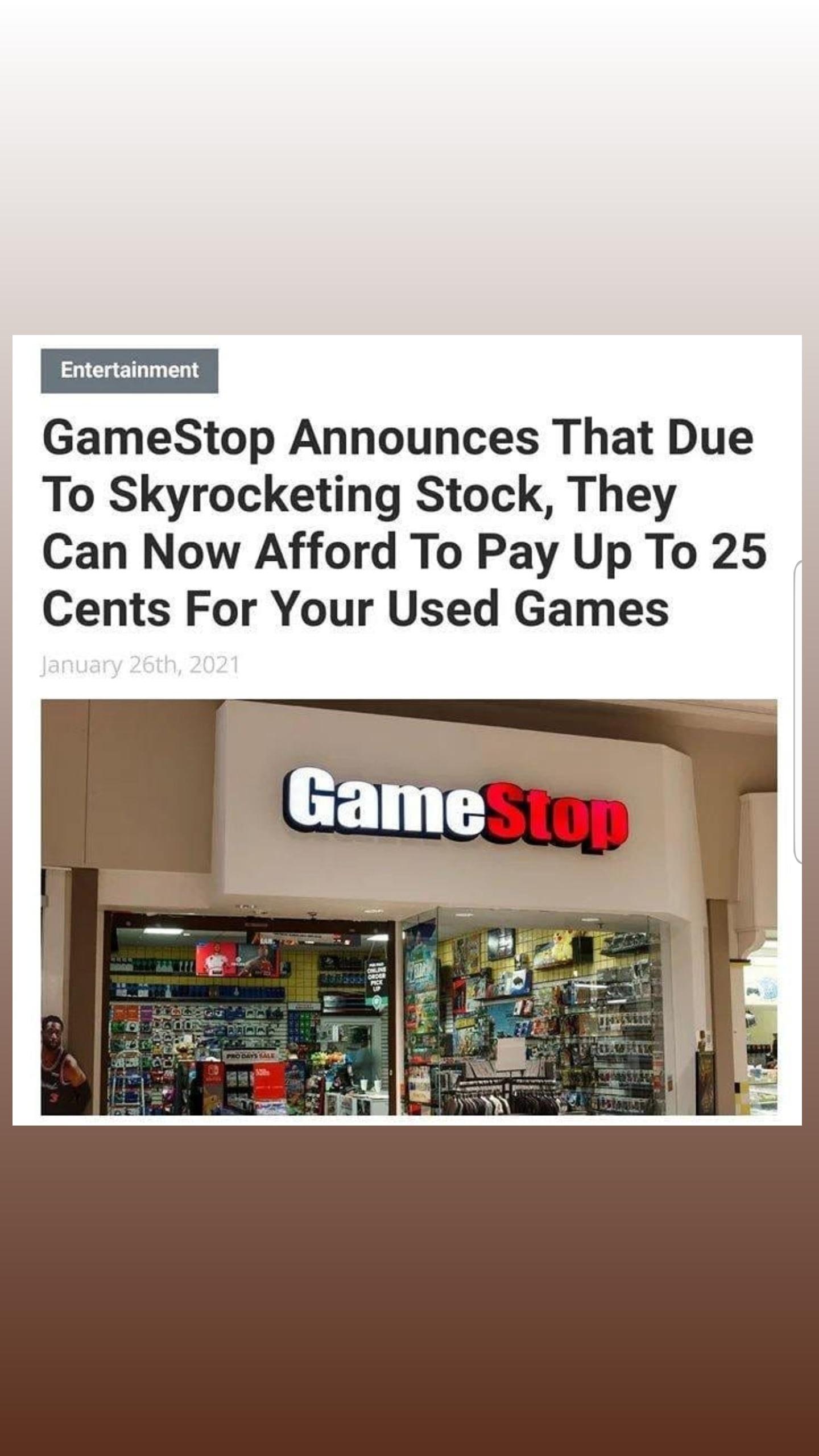 Still not sure why the US govt hasn't sent a carrier group to ensure the steady flow of X-Boxes at a price the american consumer can reasonably afford.
Epstein didn't kill himself

Apply for a bailout if your two shares crash into the dirt.

Gamestop is having the one special moment before death that Blockbuster never got.

I'll admit I found a few gems there in years past. Gamestop always forgets to dole out pre-order bonuses, so they decide to sell it like I think best buy does sometimes. Also found new and old consoles there, both hard to find. Though also at Fred Meyer, so whatever.