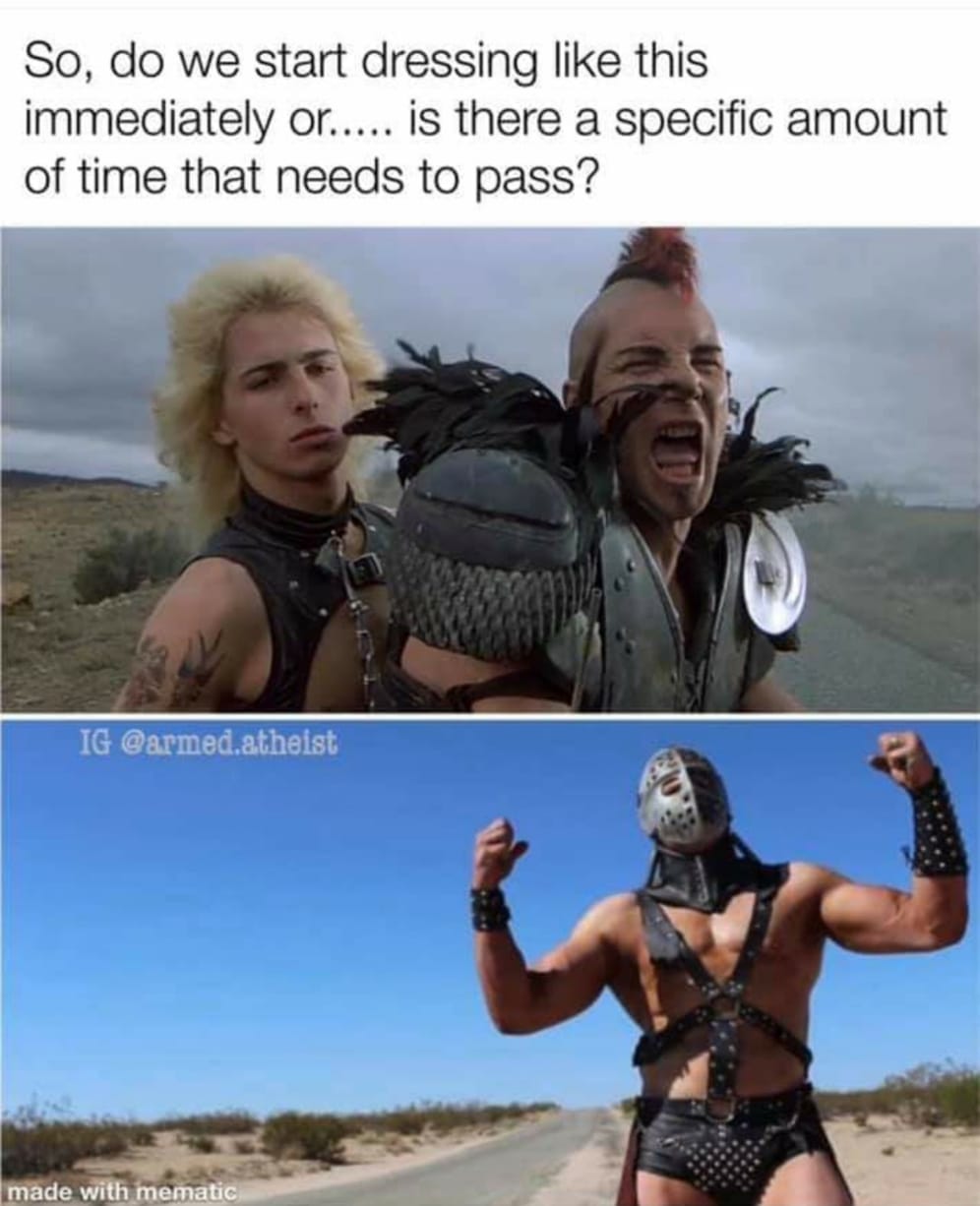 I think I could re-purpose one of my medieval outfits.
Epstein didn't kill himself

did they have gingers in the middle ages? i thought they were chased out of society into the wilderness, like lepers.

i get it, it was the incident angle of the light falling on your face turned at just the right rotation away from the sun during the fall months ...  definitely not ginger.

Of all the things to get to dilbert, I didn't think it would be that.

no one wants to be ginger
"Ah, you miserable creatures! You who think that you are so great! You who judge humanity to be so small! You who wish to reform everything! Why don't you reform yourselves? That task would be sufficient enough."
-Frederick Bastiat

Of all the things to get to dilbert, I didn't think it would be that.

Seriously though, it's 2020. Your hair can be any natural color beneath that rainbow dye job and we'd still love you for being you. No shame.

Apparently our PM has called for China to shut down its bat markets, which seem to have re-opened, except now they have guards to prevent photos.

China isn't going to let Australia get away with causing loss of face, they were already down on our coal and iron exports, this is going to be bad.
Epstein didn't kill himself

weren't china implementing laws or regulations about wet markets before this, in any case? i thought it was an issue that had already been kicked into the long grass? i'm sure a little yapping dog with some valuable rocks nipping at their heels is giving them great pause for thought.

oh no! 25 million aussie blokes are mad at us! meanwhile china is well onto its way to financially colonizing half of africa, they've rebuilt high-speed rail and road networks for a 21st century silk road, and have just constructed brand new cities and major ports out of thin air in burma, pakistan, etc.

The Chinese have already said its an outrage that so few people are sitting on so much valuable mineral and farming wealth. They'd gas us all if they thought they could get away with it.

What they were doing before, who knows, China and half of Asia still have these markets and won't close them down themselves, really its part of their instinctive arrogance.

"Instinctive arrogance" is pretty rich honestly, coming from any human.

A nation still clinging to traditional medicine, bear bile is great for COVID-19 apparently, not so good for the bears I guess.
They are instinctively arrogant and selfish, more so than other humans.
Epstein didn't kill himself

4 pages ago you were being conspiratorial and saying they obviously had a secret vaccine they were keeping from the world, their recovery rate was too great, they had control of this all along, they’re weaponising it, blllla blllla bllllaaaa.

now you’re freaking out that they’re using bear bile and not addressing it at all.

dilbert i’m sorry but it seems to me like jews and china-men give you night sweats.

how many chinese medical workers just gave their lives in service? instinctively selfish you see! you talk arrant nonsense. it’s pathetic in a person of your age.

A nation still clinging to traditional medicine, bear bile is great for COVID-19 apparently, not so good for the bears I guess.
They are instinctively arrogant and selfish, more so than other humans.

Why is it always necessary to go over racialism again and again.

It's a little mind boggling how you seem to have no problem following the logic of science in a number of other fields but refuse to confront the fact that scientific racism has been thoroughly discredited and debunked since the 1950s. This shit was done and over with before you were born dilbert, there's no excuse to cling to that nonsense in the 21st century.

i have never met anyone, online or in real life, who is so full of fear. suspicion and paranoia govern all of his thinking.

at least he has a cute name for it. 'scientific pessimistic realism'. it's very catchy.

Maybe you're just not very perceptive?

You seem to have lived your life with your head up your backside, in a bubble of graduates and academia, raking over the past.
How much time have you really spent with average people, looking at dealing with issues and building the future?
Have you spent much time dealing with or observing mainland Chinese? The face they put on is different from their unguarded one.

As for China, its uncanny how what is happening now mirrors Japan's buildup before WW2.
Building up their military, stoking nationalism and convincing their citizens to get behind their leaders in the face of global racism, oppression and denial of free access to resources.

Its perfectly possible that their PLA Wuhan virus lab is a mirror of Japan's Unit 731
https://en.wikipedia.org/wiki/Unit_731
Who can say if the release of the China Bat Flu was natural, accidental or deliberate?
They've learned they can take down an aircraft carrier by sneezing on a handrail, and I'm sure its a coincidence they have far more and better developed PPE on hand than we do.

Australia seems to have done better than many places, so far at least. We're having outbreaks here and there, contained so far.....

With the benefit of hindsight some decisions were good, crimping inward travel, requiring people to isolate on entry, contact tracing, large scale testing.

If we'd done it again I think there would be mandatory enforced isolation for anyone coming in, its strange the Diamond Princess passengers were put in a monitored and secured camp but chinese university students just needed to spend a fortnight in Thailand or Bali, that was stupid.
Obviously the Ruby Princess was a total fucking fiasco, clearly the fault of the state govt. Deflecting attention with a criminal enquiry into the cruise company isn't going to work, no-one is stupid.

But the bigger problem than the pandemic will be China's response to Australia's response to the pandemic.
Chinese travel was banned, which caused a lot of ranting about racist Australians (and no Chinese are banning dirty foreigners from restaurants), the PM has publicly criticised China twice now, maybe three, they won't take it without retaliating, Emperor Xinping can't be seen to be weak in the face of the foreign hordes.
When the People's Liberation Army is prevented from buying more farmland they're going to start getting nasty.

scientific racism has been thoroughly discredited and debunked since the 1950s.

People are racist, always have been and always will be.
Epstein didn't kill himself

branson hasn't paid tax in the UK for almost 20 years. he has made no secret of it. his whole brand is of being some billionaire living on a private tropical island.

he sued the government recently over the loss of an NHS contract to virgin's healthcare/medical business.

he has clashed with the government previously over the poor management of rail franchises for virgin rail.

as soon as coronavirus hit, he was asking the UK government for a bail-out for virgin air. he immediately furloughed all of virgin air's staff.

weekly reminder that billionaires should not exist.

I don't mind billionaires or bailouts. I am aware bailouts are loans and not free money. So I don't need a lecture about economics. But I feel that if a corporation needs a bailout and they are in fact too big to fail, we should just totally nationalize them.

GE is going to have to be bailed out. We should nationalize it and rebuild domestic manufacturing using GE's infrastructure as a building base.

The Chinese embassy in Canberra has accused Home Affairs Minister Peter Dutton of being a mouthpiece for the United States, in a withering criticism describing calls by Australian politicians for greater scrutiny of China's handling of the coronavirus crisis as "pitiful".

In an interview last week, Mr Dutton cited US State Department comments it had "documentation" showing how the virus had spread — but noted he had not seen the documents referred to by officials.

The Home Affairs Minister joined the chorus of officials demanding China be more "transparent" about the COVID-19 pandemic, arguing the families of the dozens of Australians who had died after being infected deserved answers.

"I don't think it's too much to ask — it would certainly be demanded of us, if Australia was at the epicentre of this virus making its way into society," Mr Dutton told the Nine Network.

"I think it is incumbent upon China to answer those questions and provide the information, so that people can have clarity about exactly what happened because we don't want it to be repeated.

"And, we know that this is not the first instance of a virus being spread from the wildlife wet markets and we need to be honest about that."

Chinese officials have now hit back, taking aim at Mr Dutton for making such claims, especially after Mr Dutton conceded he had not seen the US Government's evidence.

A spokesperson for the Chinese embassy in Canberra made the comments in response to a question from the Global Times, a Chinese state media outlet known for taking a hardline in response to criticism of Beijing.

"What's puzzling is without having seen the documentation, why he can't wait to ask China to be 'more transparent'?" the spokesperson said.

"Obviously he must have also received some instructions from Washington requiring him to cooperate with the US in its propaganda war against China.

"It is well known that recently some people in the US including high-level officials have been spreading anti-China 'information virus'. Their aim is to shift blame and deflect attention by smearing China."

The embassy argued it was indicative of a broader issue.

"These days, certain Australian politicians are keen to parrot what those Americans have asserted and simply follow them in staging political attacks on China," the spokesperson said.

OK guys, didn't you lock down Wuhan from the rest of China but let Wuhan residents travel freely to the rest of the world and rant about 'racism' when other countries complained?

If we don't see this on an international scale China's economy is still going to be fucked, I don't see people here buying Chinese if they can possibly avoid it.