Hmm, McCullum out for a duck. Not a great start. Problem with this bloody game is that it's so long you can't draw any conclusions this early on. Aussies look very calm and confident while the Black Caps look a little spooked. Like I said though, long game.
[Blinking eyes thing]
Steam: http://steamcommunity.com/id/tzyon

Man, this is either going to have to turn into another Eden Park or everyone around here is going to be very sad tomorrow.

Good thing I've trained for this. Losing a crucial one-day cricket match is painful given how long it takes but the America's Cup drew the torture out by a whole week. This is why I like rugby. Win or lose, it's over in 80 minutes.
[Blinking eyes thing]
Steam: http://steamcommunity.com/id/tzyon

First over and we haven't lost a wicket. Things are already looking good.

From the first over nothing went the Black Caps' way. Full credit for putting everything in and trying everything despite this but it just wasn't to be. Australia had too many answers, were too good in too many key areas. Even when it came to luck they seemed to have that as well. The bowlers rose to the occasion and the batsman just played the exceptional game they usually play.

First World Cup final playing the best team in the world at their fortress. A brave showing was really the best we could expect and the Black Caps delivered that and played with the sort of character everyone's come to expect from them. I'm pretty sure Vettori was injured but he soldiered on like a warrior, (we need another short-sighted hipster-bearded Italian librarian, the guy's an icon.) Very proud of all of them. Didn't think for a second pre-tournament that they'd get this far.

My heart rate thanks both teams for not making it another close one. That being said the New Zealand vs. South Africa game is my game of the tournament.

Maybe now that the world realises that we don't suck at cricket any more they'll let us play a few meaningful games. Australia - looking at you mates. Our rugby team gives you at least three shots a year at taking on the world number one, how 'bout you return the favour eh?
[Blinking eyes thing]
Steam: http://steamcommunity.com/id/tzyon

Ditto. Was telling my flatmate that the New Zealand vs South Africa match would have made a far more fitting final. Possibly because we won that one.

Australia's streaks ahead of everyone else, especially New Zealand who they only ever give the honour of playing about twice a decade. Ability to show up in a high pressure match like that can't develop in a vacuum which is the major reason the Black Caps fell flat. The ICC is pretty much run in a way that sees India get every advantage so they don't give a shit but I hope this tournament's reinvigorated a bit of the old trans-Tasman cricketing rivalry.

On another topic, this: Is immeasurably better for cricket than this: 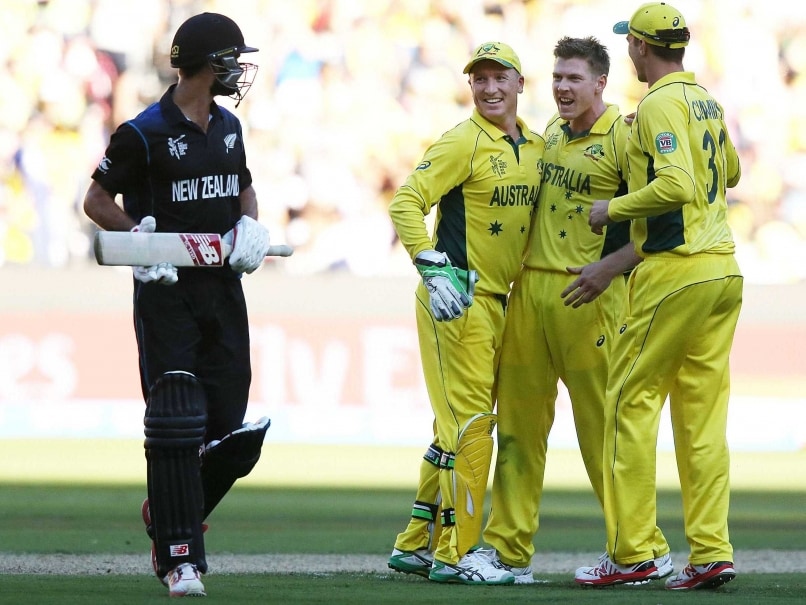 The first picture is Grant Elliott consoling a shattered Dale Steyn after his six off the second to last ball sent New Zealand into the final at the expense of South Africa.
The second is three members of the Australian team taunting Elliott who had just been dismissed for the Black Caps' top score of 83 in a crumbling innings during the final.

Australia has the best cricket team in the world but to a man they are utter pricks. At the end of the day winners are grinners but I'm so very proud that my team acted how they did throughout the tournament. South Africa seem to be following suit as are some other teams and I hope the Australian team will one day let their talent speak for itself and cut out the childish and mean-spirited sledging. It's a relic from the past and shows the worst in sportsmanship in any sport. There's aggression and passion but then there's meanness. Elliott was out, what benefit was there in carrying on that way aside from trying to make him feel bad or just indulging in egotistical posturing.

Brad Haddin said the Australian team was made to feel uncomfortable by the niceness of the Black Caps. Maybe there's hope for them yet. Of course he went onto say that the New Zealanders deserved the sledging for making them feel uncomfortable so maybe not.
[Blinking eyes thing]
Steam: http://steamcommunity.com/id/tzyon

Obnoxious in defeat, insufferable in victory, that's the Aus cricket team for you.
And no, other teams don't sledge to speak of, not in the same way either.

I've noticed the Aus media doesn't report defeats, did you know the Aus rugby team has had a whipping lately? No-one here does.

Yeah I remember the top sports news story the day after Australia got bollocked by Argentina last year despite being up 14-0 within 20 minutes - it was Matt Giteau being named French Club Player of the Year. Of course if you try to talk to most Australians about rugby they'll say it's only a fifth tier sport. It was third tier when Deans was coach but then he was kicked out and replaced by McKenzie and they got even worse.

There has recently been a bit of a movement away from sledging by national cricket teams. The problem is that Cricket Australia considered the issue and seemed to come out in favour of it, that it was a part of the game. This despite dealing with the Phil Hughes matter and realising - for a brief moment at least - that maybe having players spitting things like "get ready for a broken fucking arm" before hurling a small hard object at lethal force at them probably isn't the best thing for what is meant to be a game.

But Australia's being left behind on this, proven by their discomfort at facing a team of actual sportsmen. I don't think they're going to care unless they start losing, until then they'll put it down to jealousy.

The thing that surprises me it generally Australians hold sportsmanship in high regard - or used to. The whole underarm bowling incident, one of the main reasons Kiwis keep bringing it up is because by in large Australia felt incredibly ashamed over it. I'd like the Australian public to perhaps reflect on things a little and demand a little more of their team. But I don't see that happening. There's been a culture shift where winning's the only thing that matters now.
[Blinking eyes thing]
Steam: http://steamcommunity.com/id/tzyon

I've never heard anyone mention sportsmanship in ten years here, winning is what matters, and it doesn't matter how its done.
I thank god it was an Australian who killed Philip Hughes, we'd never have heard the end of it otherwise.
#FreeBritney

We don't hear about rugby because generally not on free to air.

It'll show on the news, but we don't really pay attention. League is king of the rugby world as much as I hate it.

As far as sledging goes, I don't think its that bad. You have people like Mitch who will try and be intimidating, but usually its just the old school chirping to get into their head. From what I've seen if there's sledging after a wicket has been taken, it's going both ways in the heat of the moment, and generally means the batsman was either coming in cocky and arrogant, or was particularly tricky to unlodge. I'd take that as a compliment.

We don't hear about rugby because generally not on free to air.

It'll show on the news, but we don't really pay attention. League is king of the rugby world as much as I hate it.

As far as sledging goes, I don't think its that bad. You have people like Mitch who will try and be intimidating, but usually its just the old school chirping to get into their head. From what I've seen if there's sledging after a wicket has been taken, it's going both ways in the heat of the moment, and generally means the batsman was either coming in cocky and arrogant, or was particularly tricky to unlodge. I'd take that as a compliment.

Fucking 1-0 to ENG, who the fuck saw that coming

Fucking 1-0 to ENG, who the fuck saw that coming

2:1 Eng. It's really not that surprising. Aus hasn't played well in England for almost a decade, even though we smash you in Aus.

We should have a neutral venue where we can all meet up, get pissed and sack the cricket off.

South of Spain anyone?

Yeah that'll do.  Our club took 100 people there 10 years ago for our 150th year, with a young family I couldnt go.  They played against boys who later went onto play for WI.  Pedro Collins being one of them.

As of writing Australia are 9 for 54.

Personally I prefer the longer form of the game i.e. T20.

Edit: Didn't even last 20 overs. First innings bowled out for 60 in the 19th over.
[Blinking eyes thing]
Steam: http://steamcommunity.com/id/tzyon

but what a fucking disgrace. players from aus these days have no sense of a swinging ball

FOR 60.
everything i write is a ramble and should not be taken seriously.... seriously. ♥

Yep, that was my reaction.
[Blinking eyes thing]
Steam: http://steamcommunity.com/id/tzyon