Almost rage quit this campaign. I am happy I didn't.

It started typical World War 2. Comintern and Allies vs Axis. Japan was also at war but wasn't at war with me. Millions of lives later and fascism in Europe is defeated but those untrustworthy allies screw me out of the peace. The U.K. puppets everything and gives me only Hungary and eastern Poland. 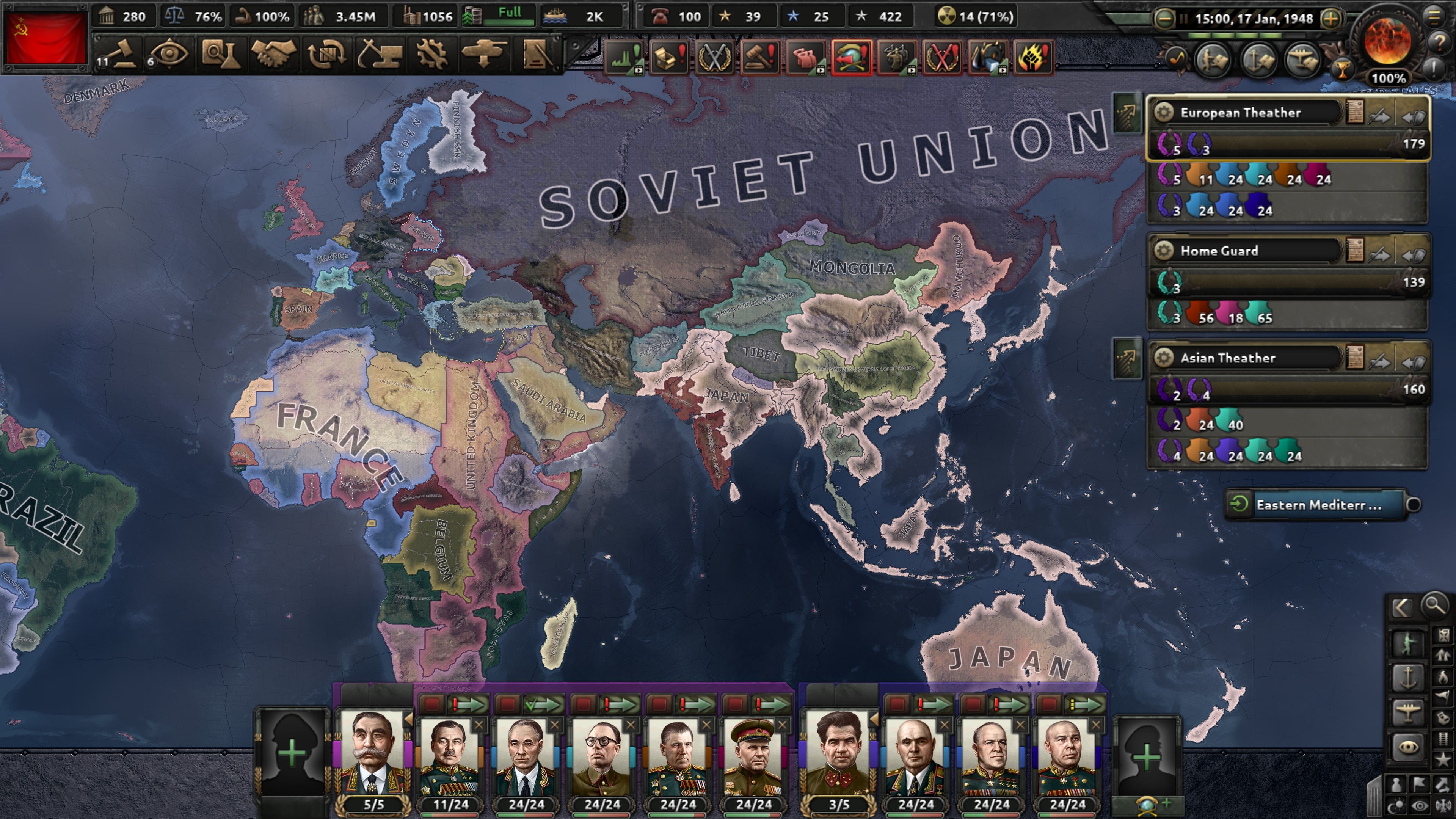 The allies are still engaged in a war with Japan and millions of allied troops land in India to try to reclaim it. While the allies fight the Japanese, I expand into the middle east, nuking, and puppeting Turkey, Iran, and Iraq.

The Middle Eastern nations had no chance while I had nuclear weapons. 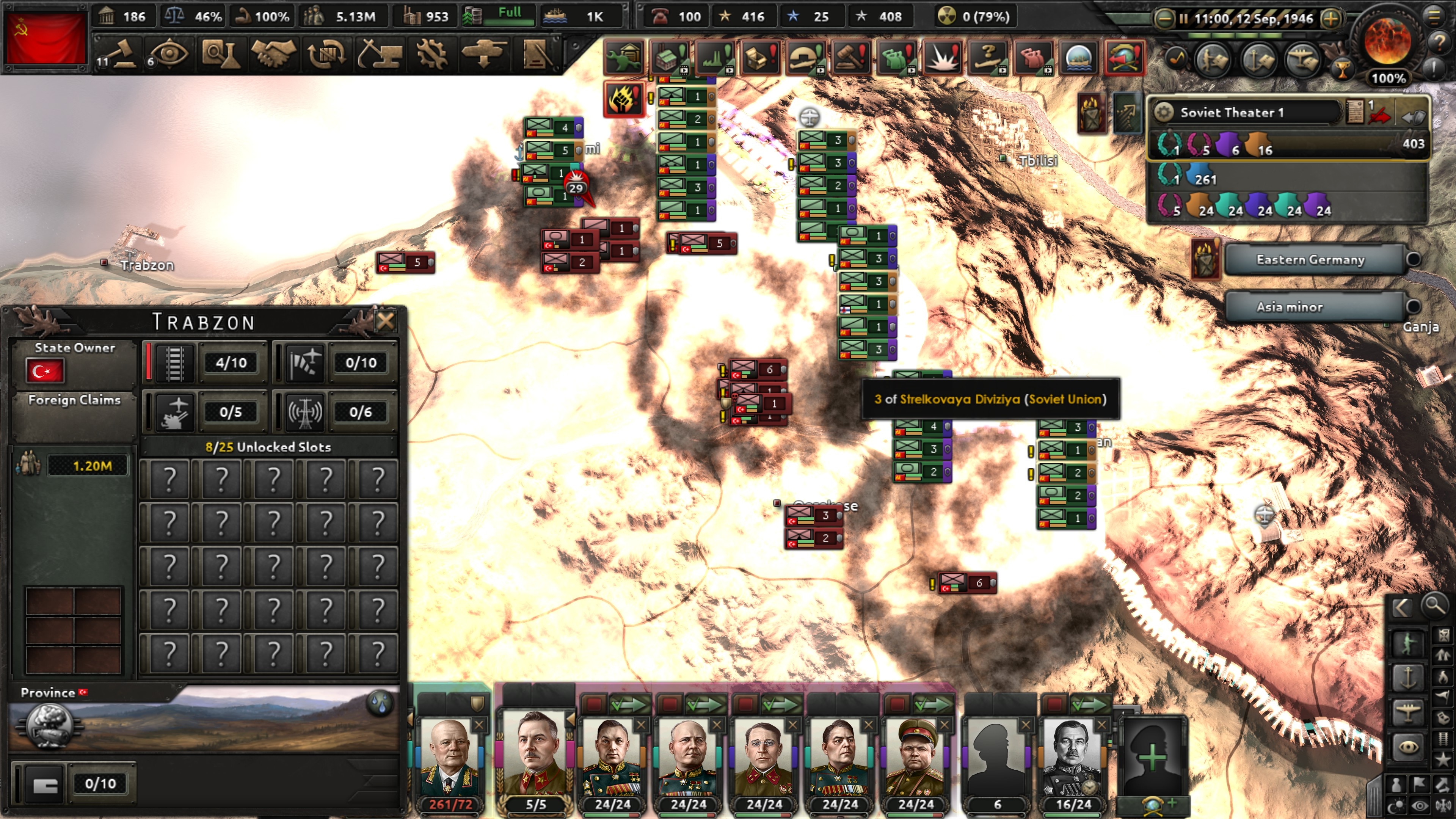 After I defeated those nations, puppeted them, and started the process of rebuilding their armies, I positioned my armies and air force for an all out assault against the British puppet states in Europe. 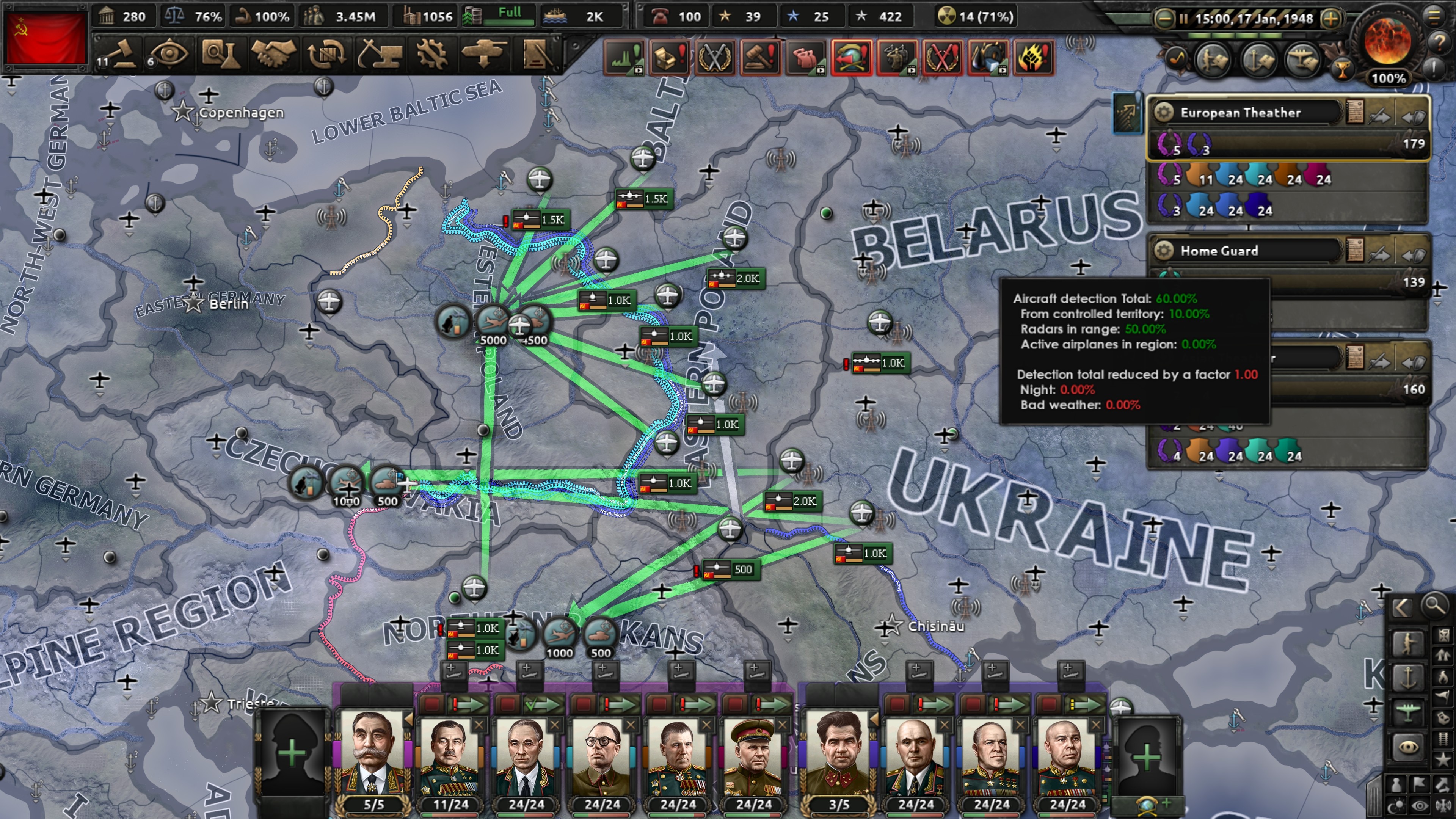 I noticed the AI started moving troops out of India and onto my borders. The U.K. then started making claims to my land. They were preparing for an attack but I attacked first. I set off 14 nuclear bombs on the Polish border and moved in. 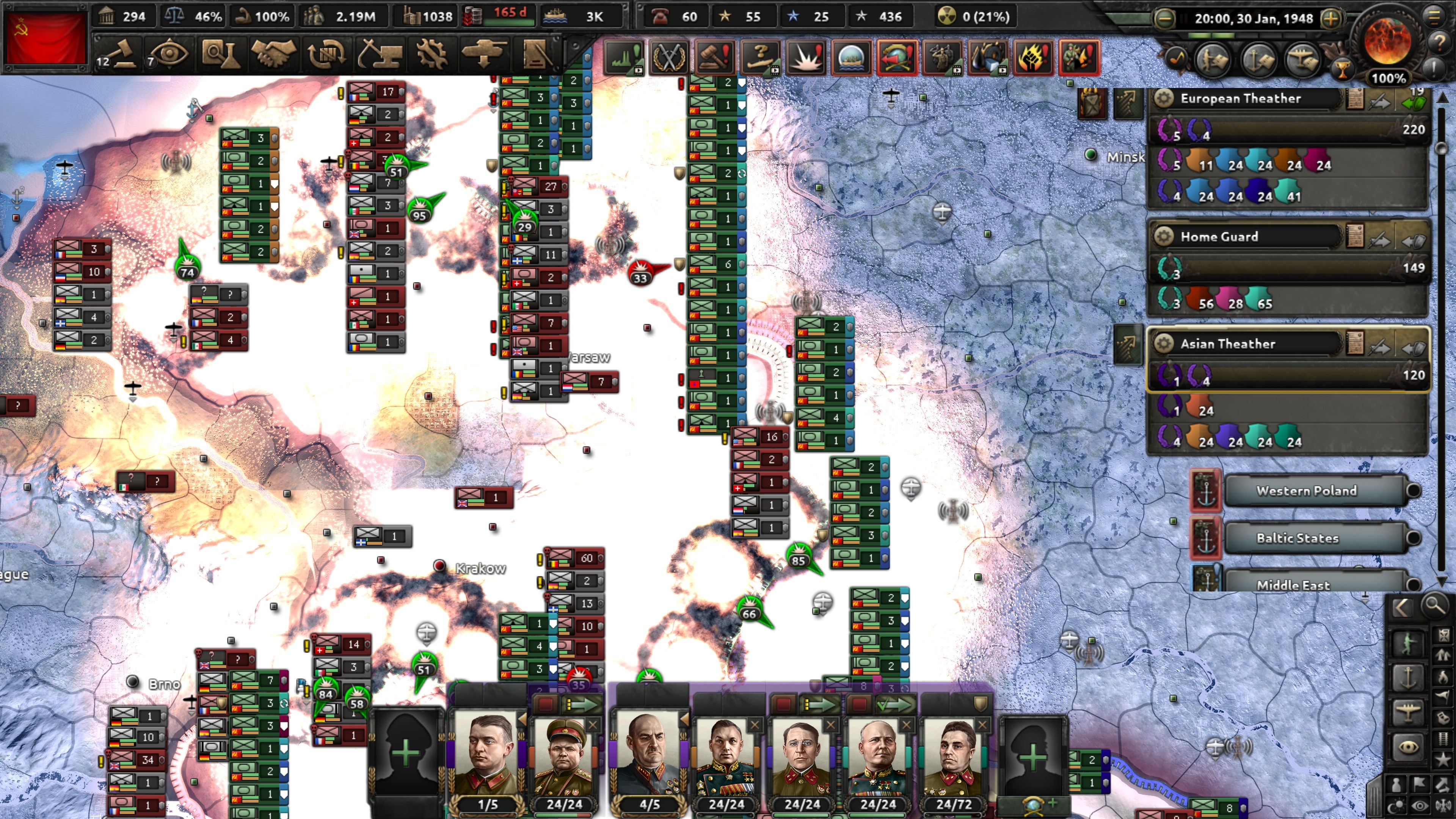 My air support along the entire region devastated the enemy. 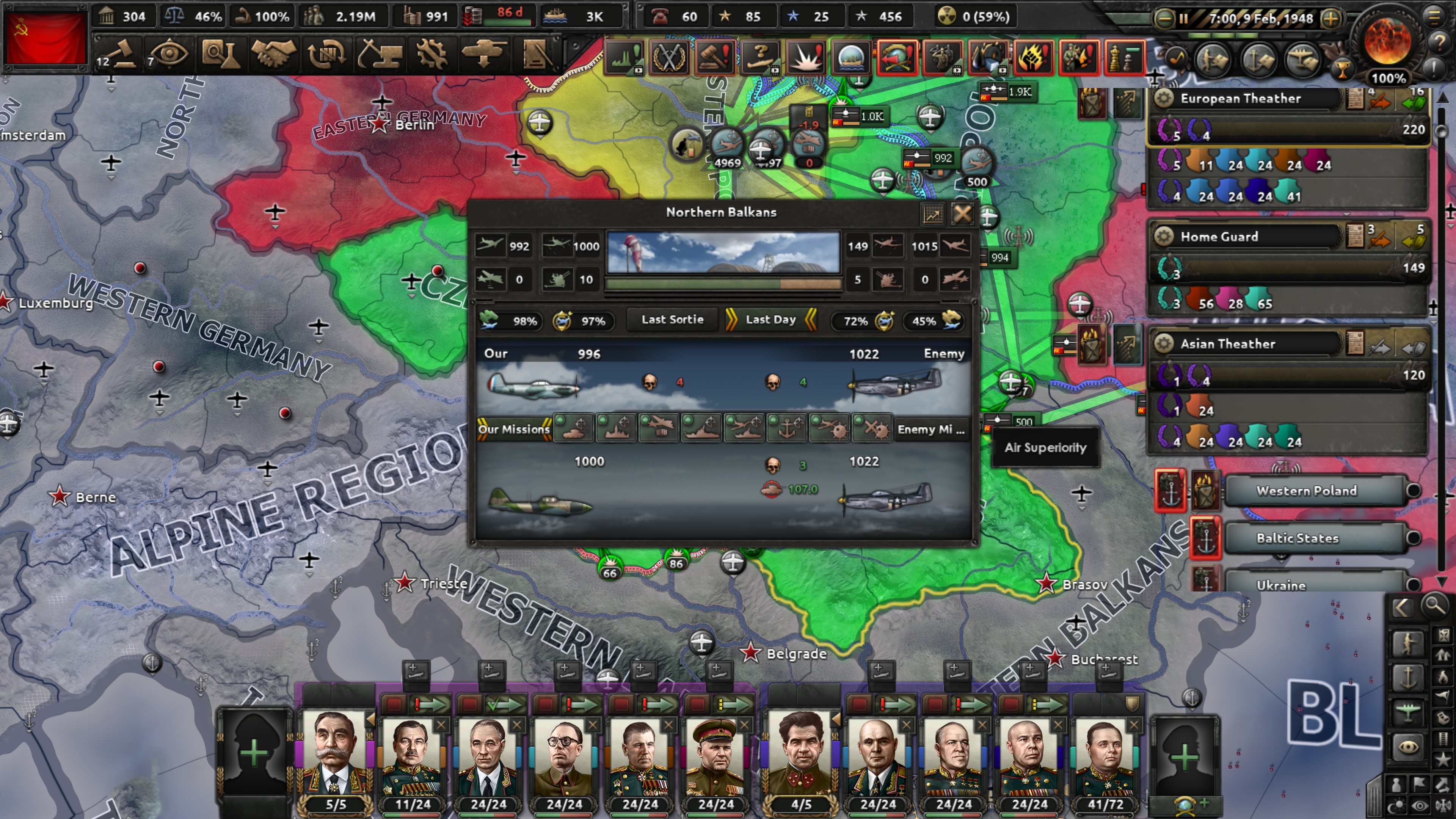 I stockpiled thousands of naval bombers before the war and unleashed them in the Eastern Med. Really devastating results. 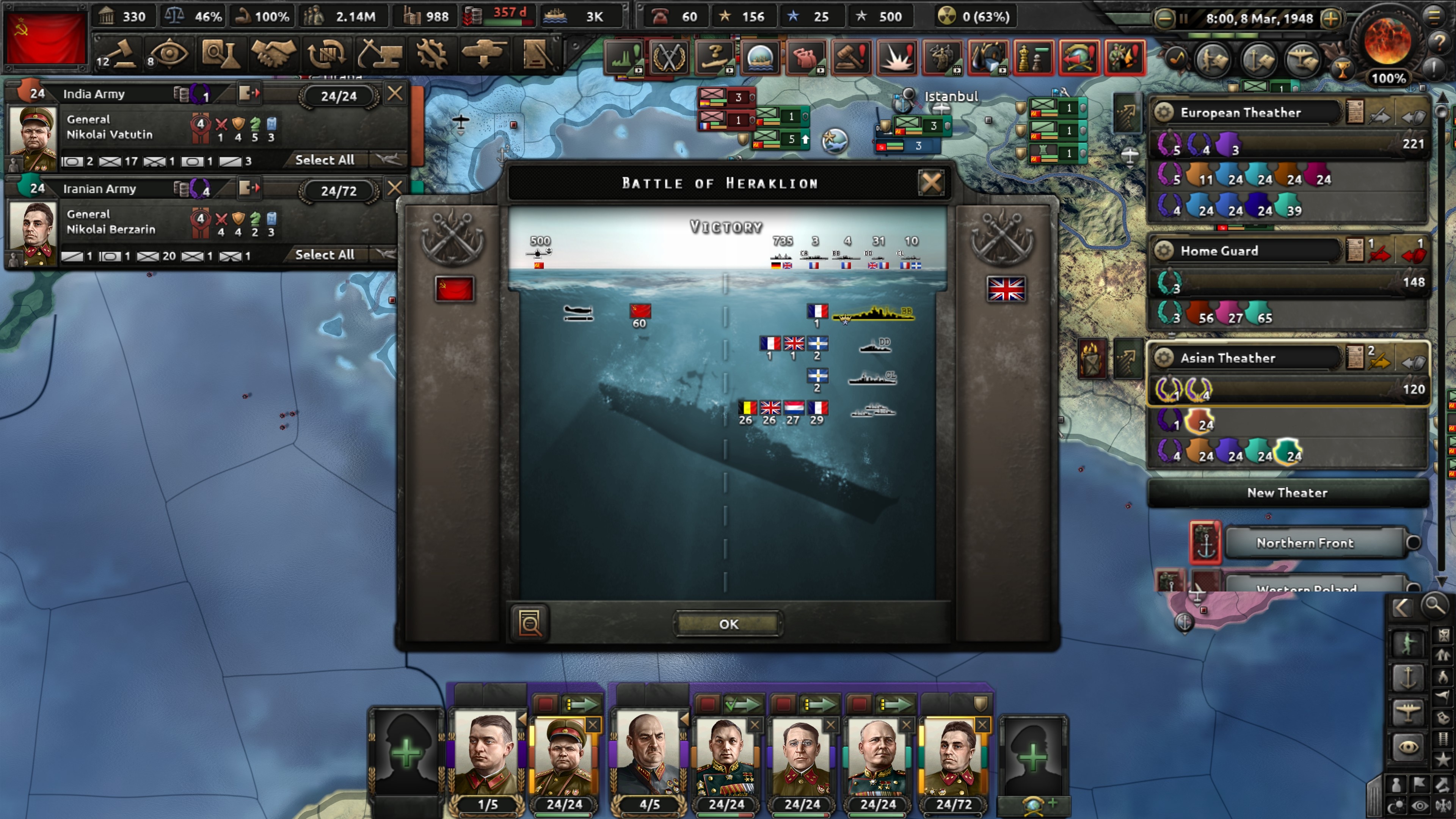 The war is going onto its third year. Japan and I are doing well. I helped expel the Allies from India while Japan has started to conquer Africa with me. We still have a long way to go in Europe. 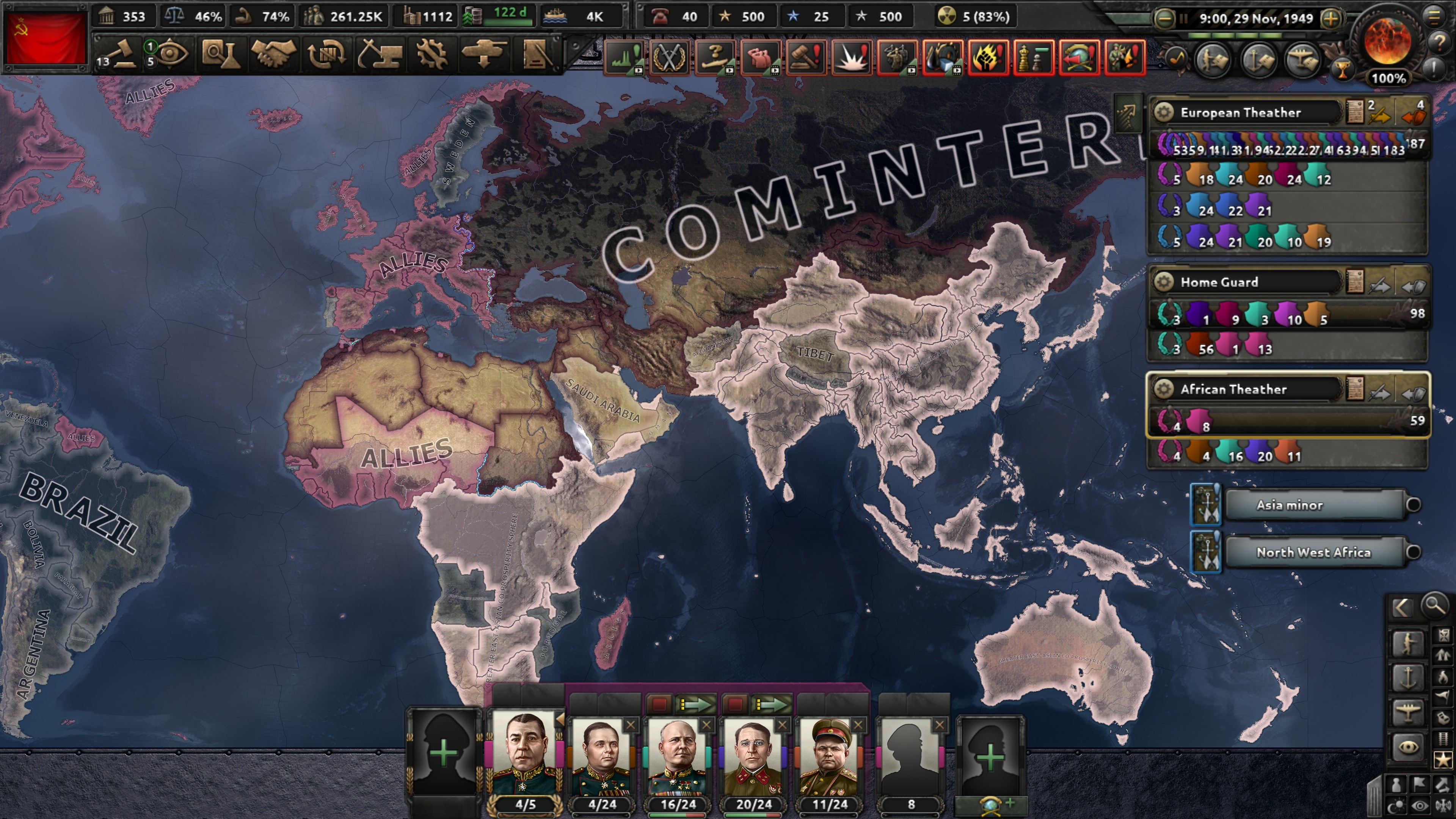 I have battered the Europeans and destroyed many divisions in massive encirclements in the Balkans. Stalemates are broken with nuclear weapons. 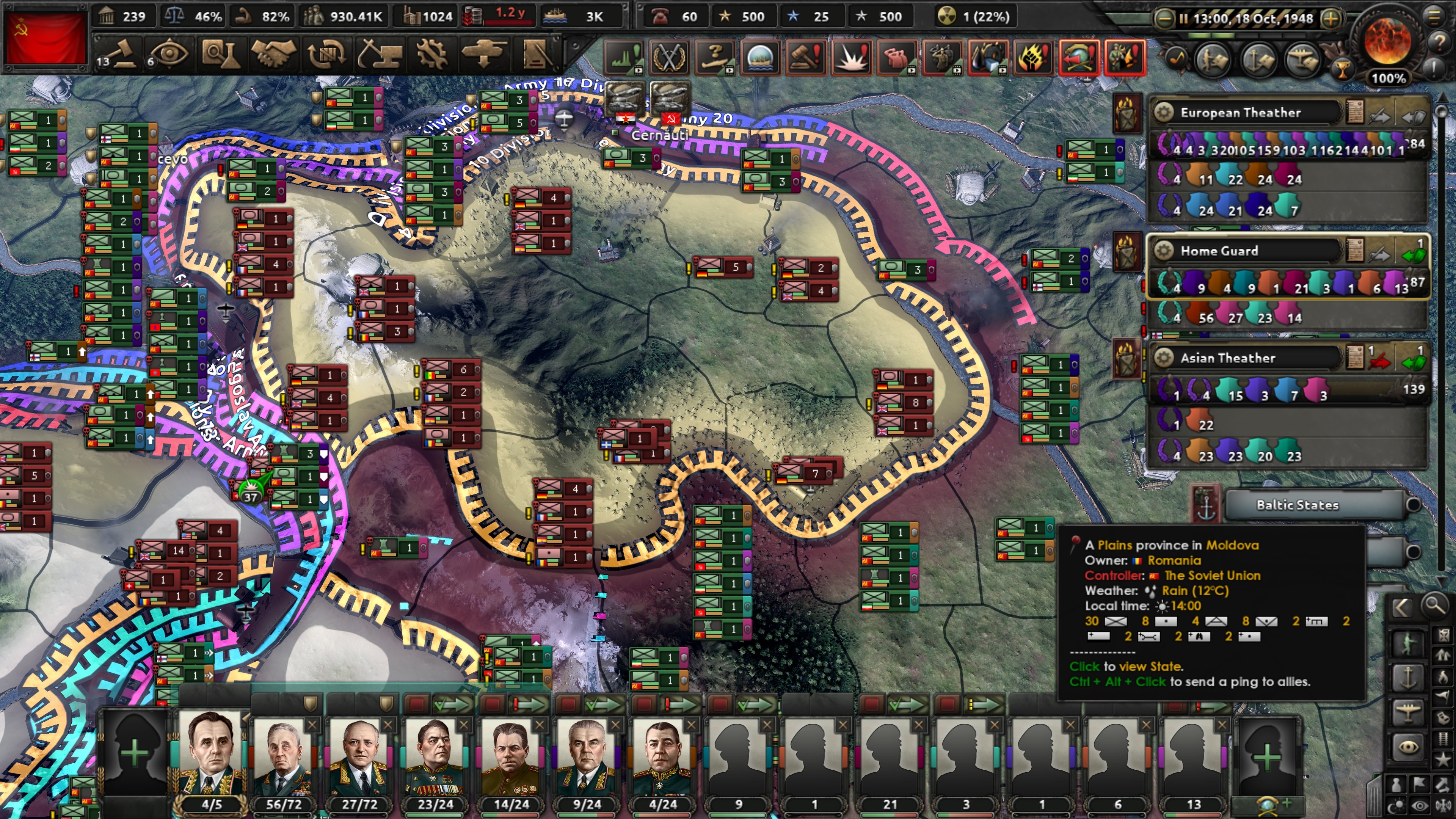 When we joined the war, the allies had only 1 million casualties. I have inflicted on the Europeans 20,000,000 causalities just expelling them from the Eastern Balkans and Poland. almost a 1000 ships have been sunk by our forces. 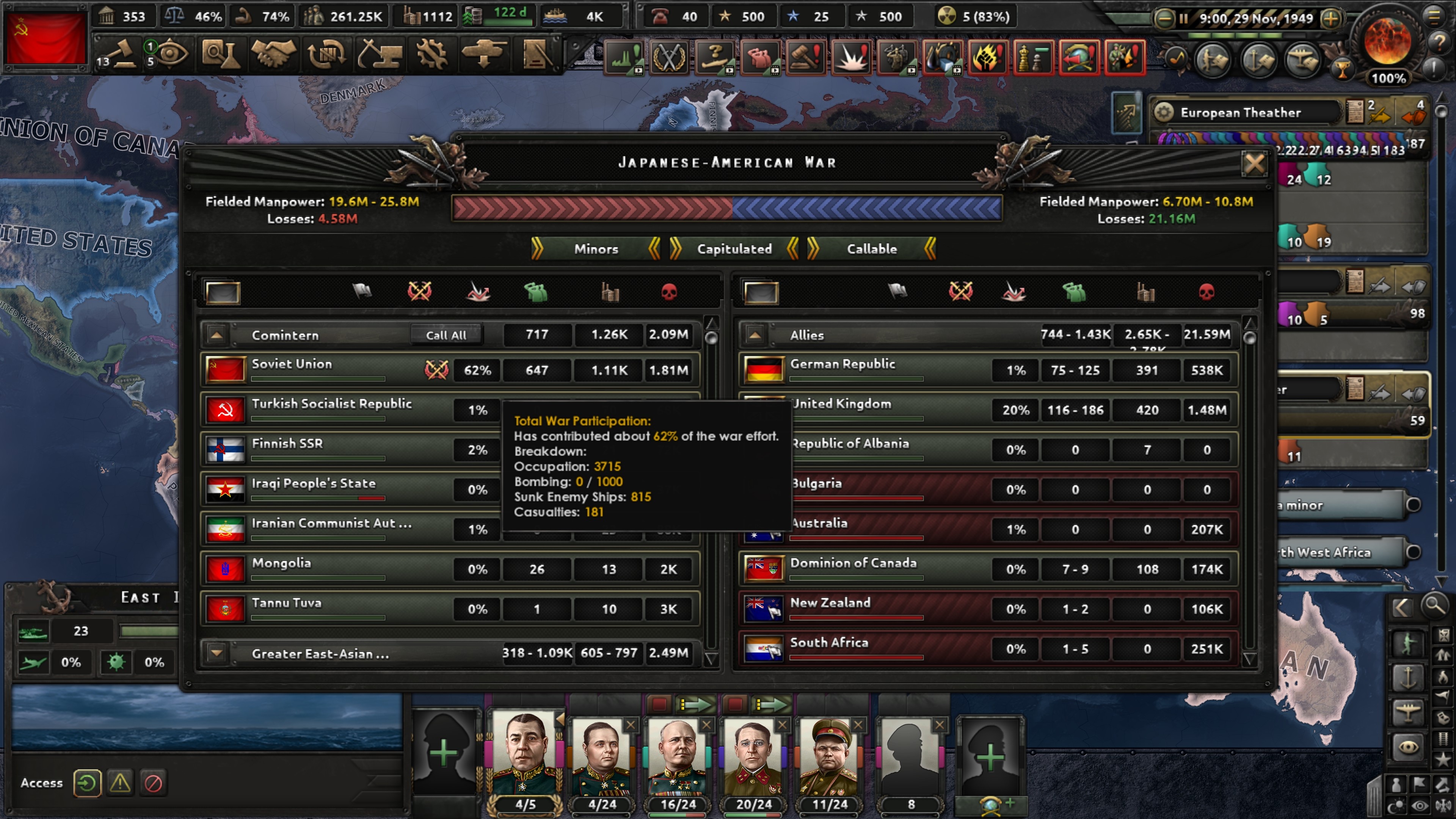 In a weird accomplishment I have created a war far more deadly than World War 2. The Nazi era of the conflict resulted in 5 million casualties on the fascist side and 2 million on the Allies. The Sino-Japanese War is uncounted from the current total too but that must have been millions also. I killed about 2 millions people conquering the Middle East. The game doesn't count ships lost as casualties, doesn't count nuclear bombings, doesn't count occupation, war crimes, and famine. We are probably north of 100,000,000 casualties if the game tracked all of that and we still have a long way to go.

Wen you're through with that you can install mods with wizard and unicorn armies and conquer the middle earth map.

What have you've (not) been playing? Red Dead Redemption 2. RTHKI and I both played the first chapter and quit.

The game is painfully slow to get started and to keep at it you would need to be into cowboy stuff.

it’s a good game. everything in it gels together very well.

I would like to play it at some point, but I've never finished a Rockstar game. Always get distracted by side stuff, like in Bethesda's games. Or games where I'll finish the first act, figure I'll resume it later, but then never do.

i'm starting to move along in the story. It's a fun game, but gets a little bogged down with all the button actions. Maybe once i get a little more familiar with the game play that feeling will go away. I find myself sometimes fumbling with the gear/weapon selections.

I don't like the micro life-type tasks you have to do. Don't make me have to routinely stop to eat and sleep in a video game.

Games with that need an arcade mode, where you can play without that. Thanks, Subnautica.

My final HOI4 campaign. Seriously this time. Why? Because their is no way to top the success of this playthrough.

Started as Soviet Union with historical AI turned off. I was exceptionally lucky this playthrough. Japan and France both had civil wars with communist. I was able to bring them into the Comintern with generous lend lease and volunteers. The U.K. decided to decolonize and then switch to communist. This meant that 3 great powers joined the comintern without me needing to fight a major war against them. Germany then started World War 2 and they were crushed easily.

Unfortunately, bad game design led to most of Germany going to Poland. 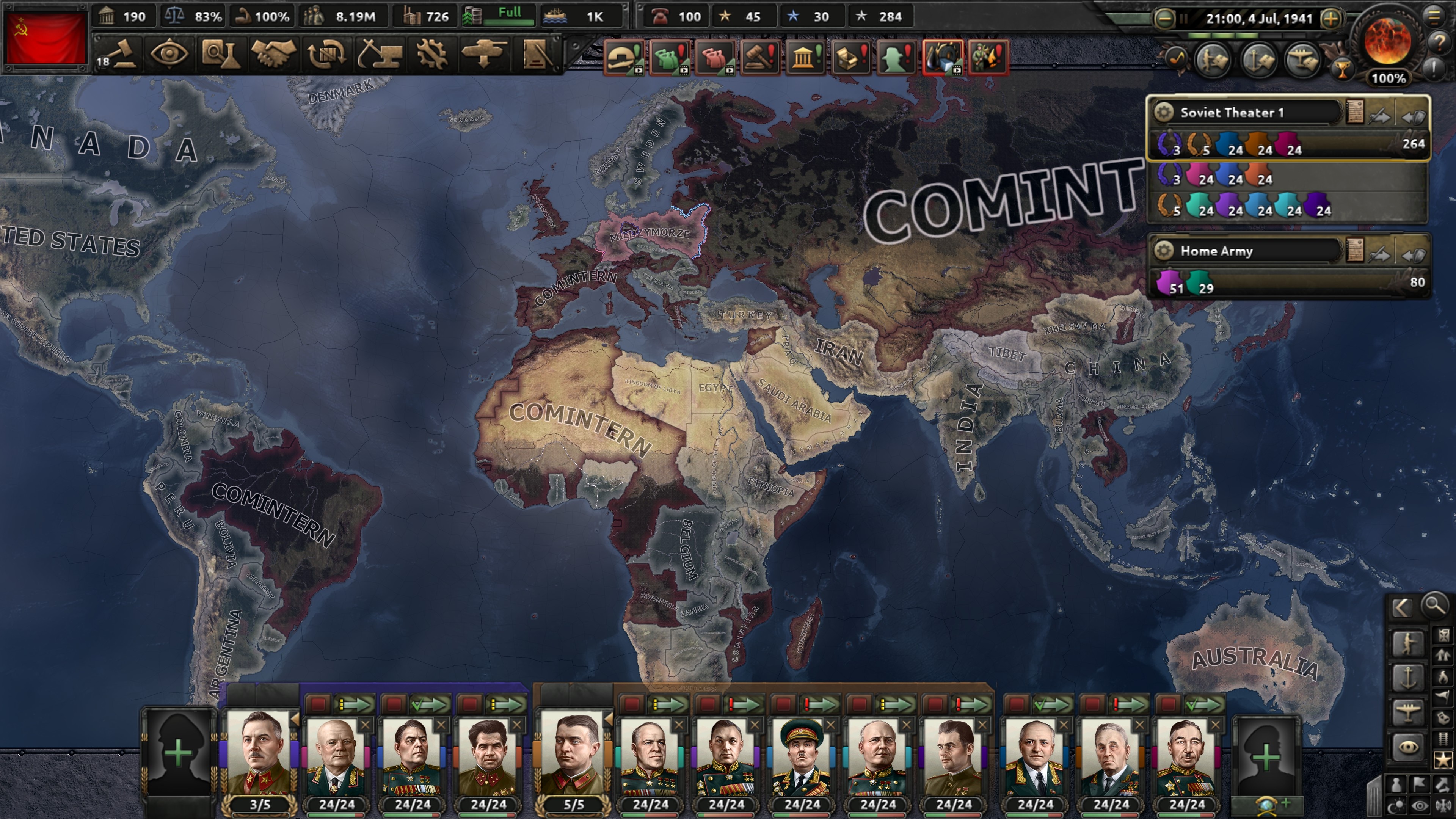 We needed to fight another war with Poland in order to finally make most of Europe communist. The wars were so quick that I wanted to attack the U.S. ASAP before they could build up. This started a decade's long global nuclear war. 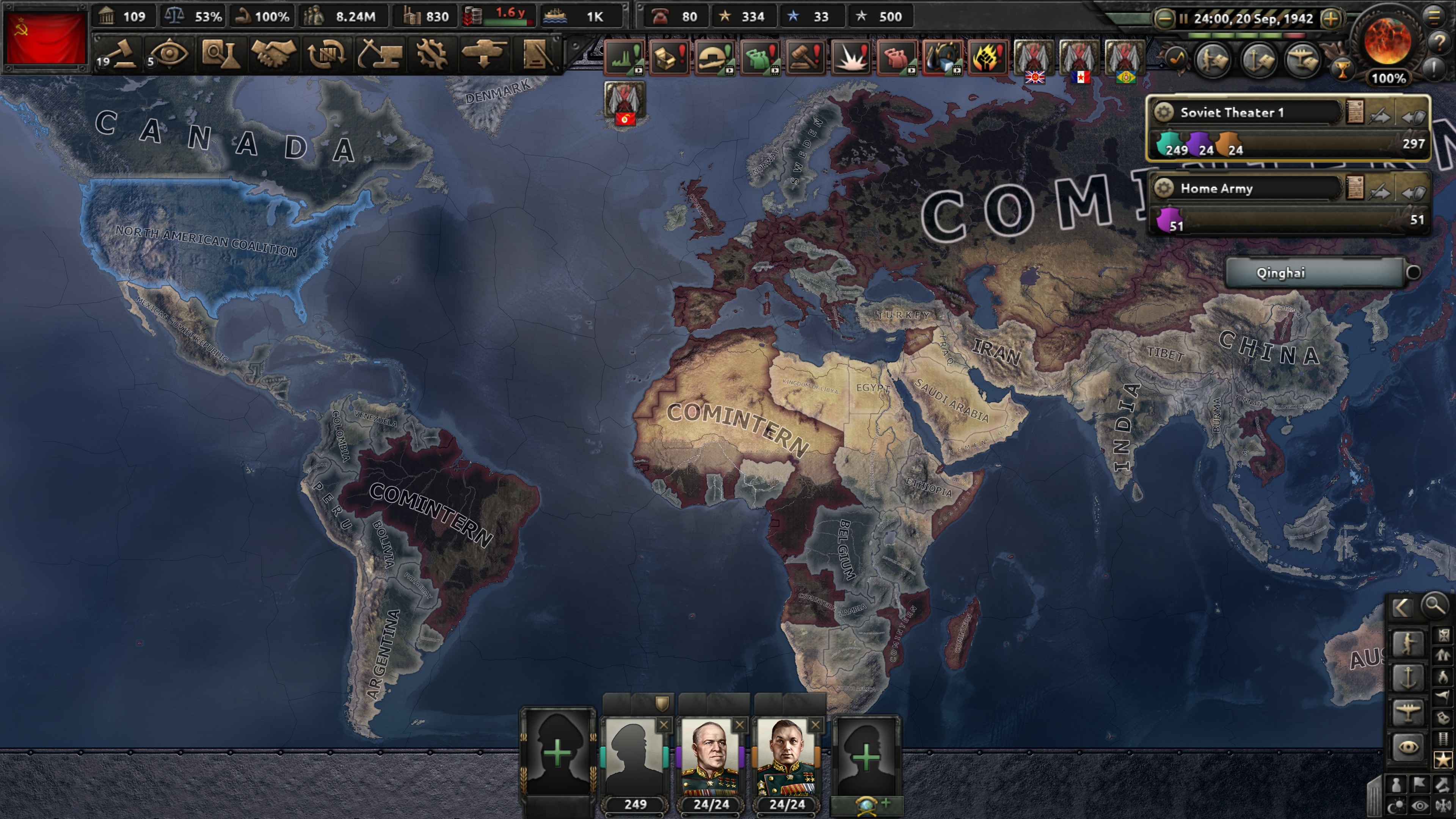 The war went poorly for awhile. The U.S. was able to swat down our naval invasion pretty easily though we were able to temporarily able to make some bridgeheads before being pushed into the sea. Mexico at this point had a civil war in which the communist came to power with Soviet support. After the communist took control of Mexico, things got weird. The U.S. invades Mexico and makes some quick success before the comintern was able to stabilize things there. A new alliance is then formed among non-aligned states of South America who then go to war us. Then the communist in East Asia invaded China. 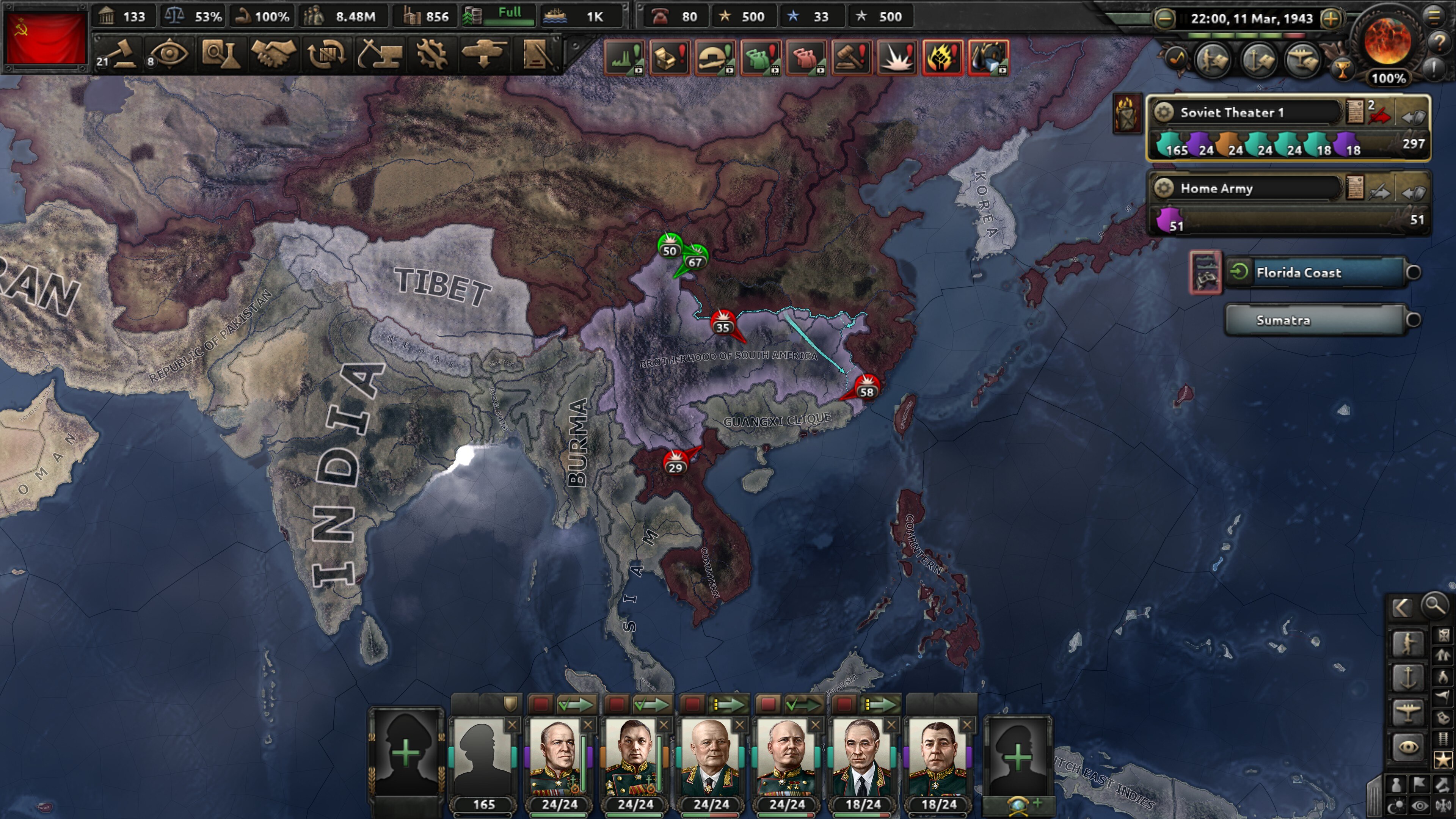 The Chinese part of the war was over quickly. The Latin American war took awhile. Other states joined the U.S. alliance and the end result was that all of the Americas was at war with the Comintern. 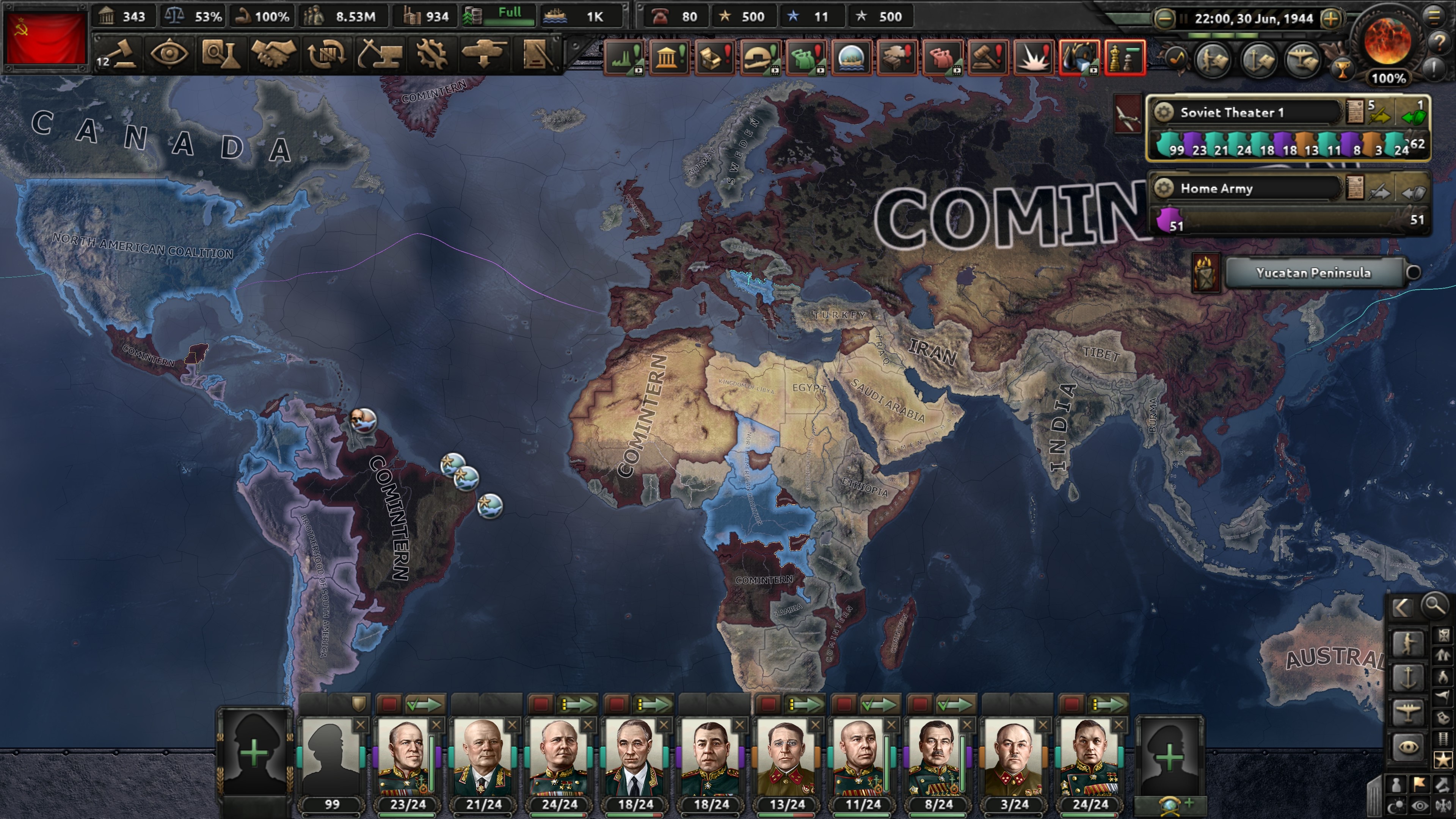 We fought well past 1945 in order to defeat the forces of Latin America but made no progress in fighting the U.S. The U.S. made little progress in Mexico either. The U.S. then got annoyed and nuclear bombed Mexico City. 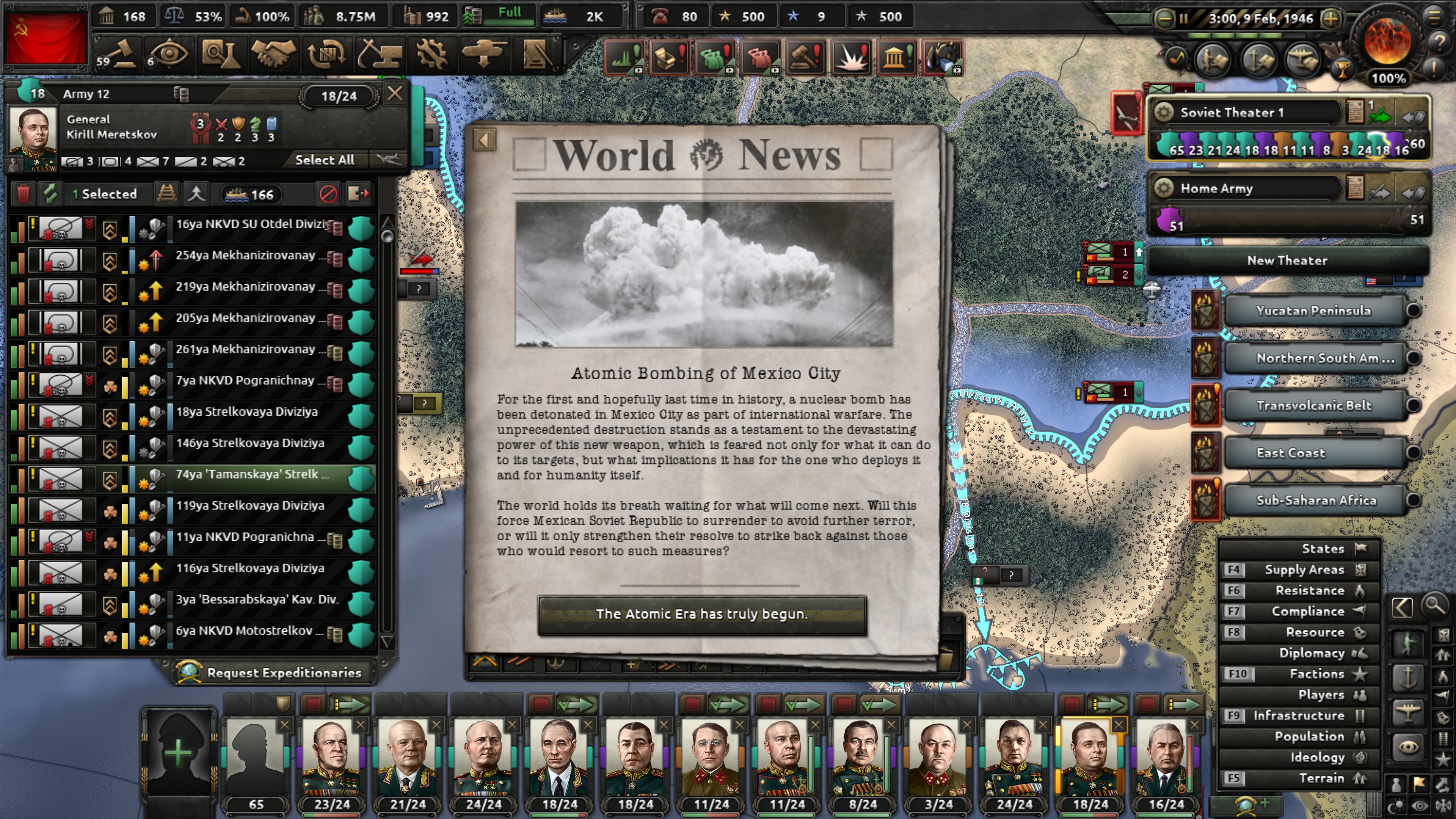 This led to the Soviet Union starting their own nuclear program. While developing our nuclear weapons, the Comintern was able to make a pretty big breakthrough in the NYC region. 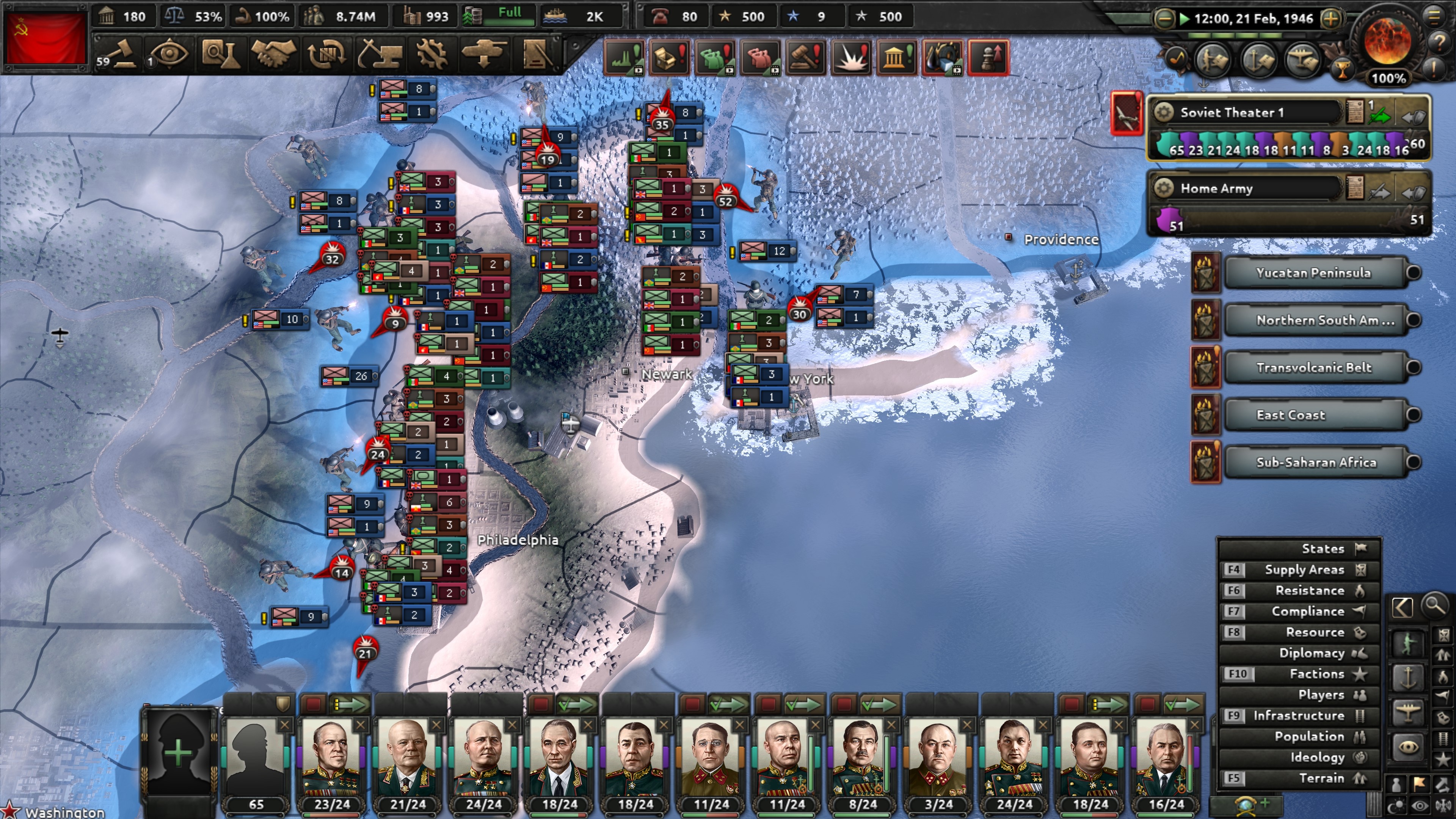 This was the biggest landing we had up until this point. But we were eventually pushed into the sea again. By the time we had finished being expelled from the NYC region, we had nuclear weapons. So we used them to nuke NYC, Boston, and Providence. 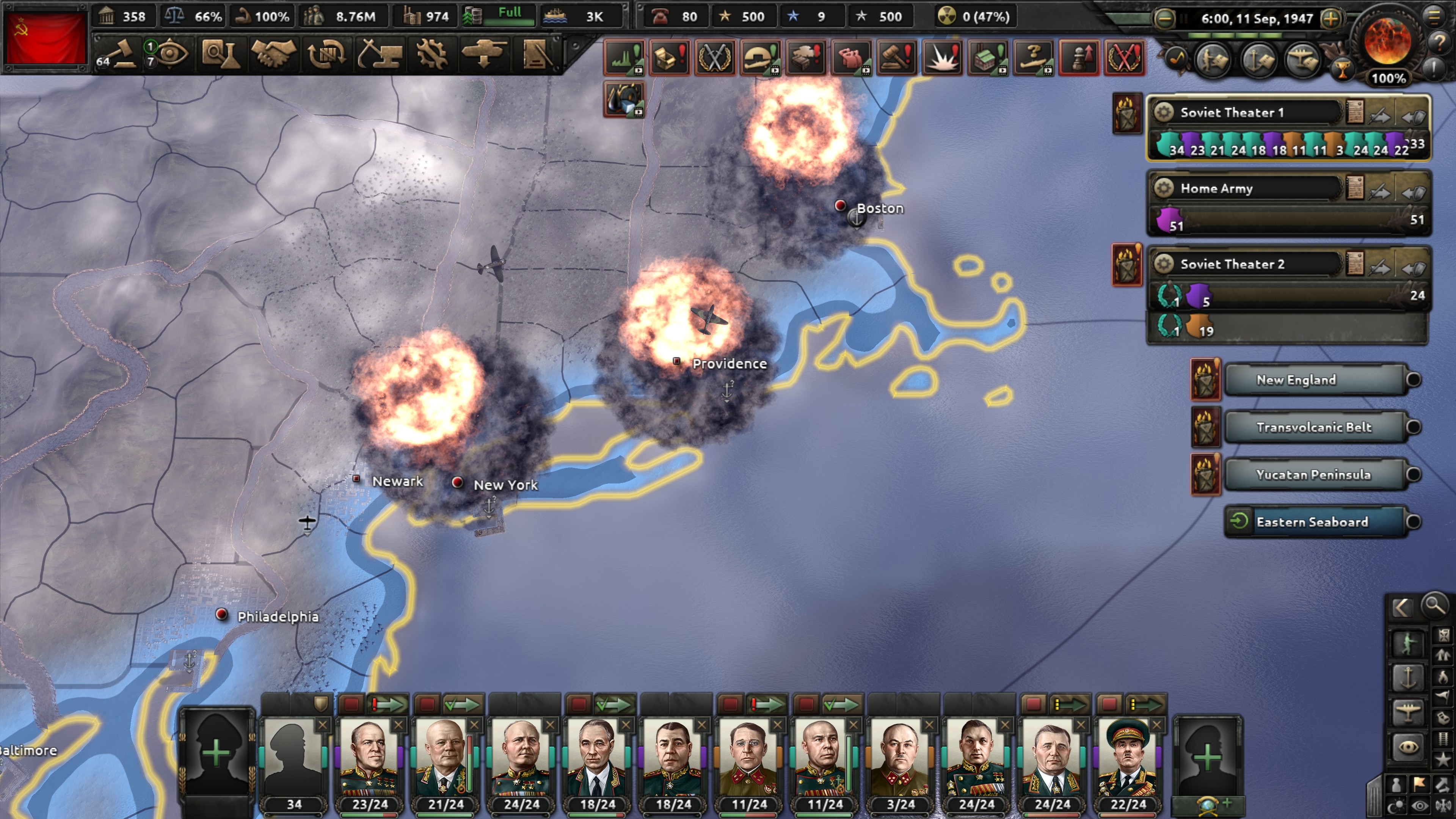 Yet the war continued for years. Through the use of our spy program, we were able to start a civil war in Canada which disrupted the capitalist alliance. We made huge advances on the east coast at this point. Most of north east was under our control but things then entered a stalemate on that front. Again taking advantage of our spies, we were able to start a communist uprising in the U.S. 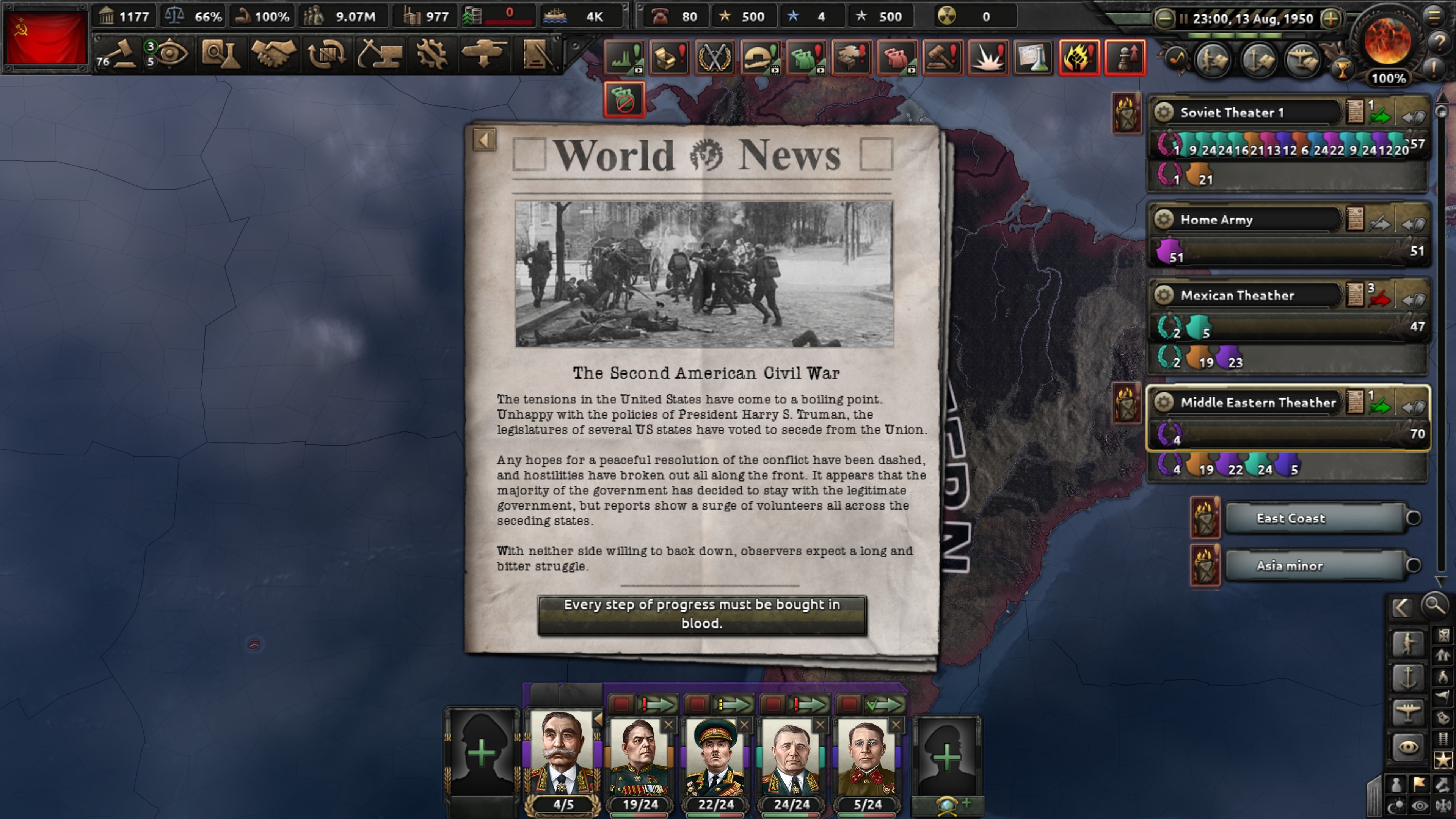 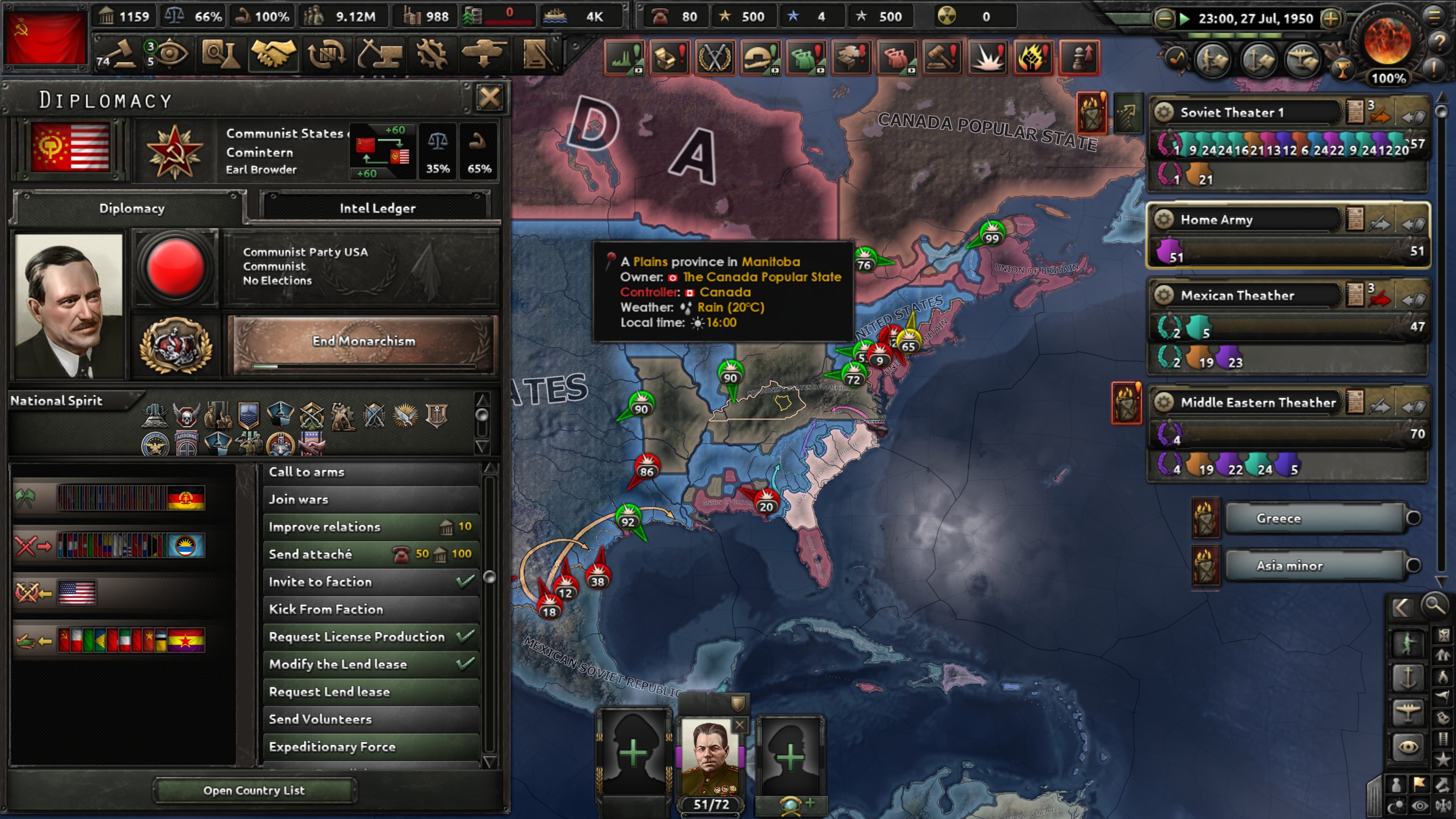 At this point, the U.S. starts to decline rapidly. Two other parts of the U.S. then break off. The Confederates in the south declare war on the U.S. while the midwest remains neutral. 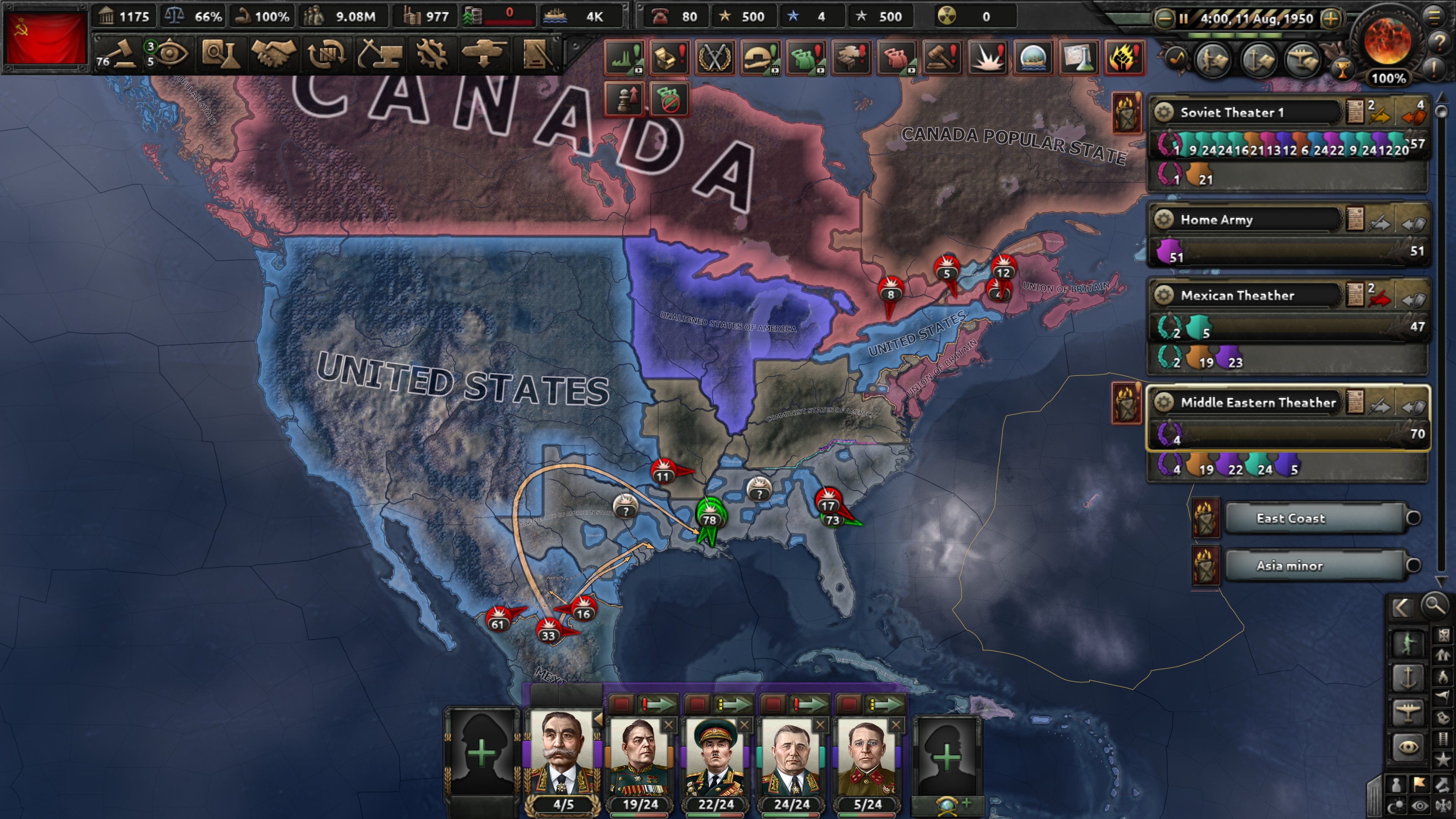 At this point, the U.S. starts to collapse. And we finish the war with the communist Americans taking most of U.S. while the Confederacy takes the south.

At the end of the war this is what the world looked like. Please note the year. 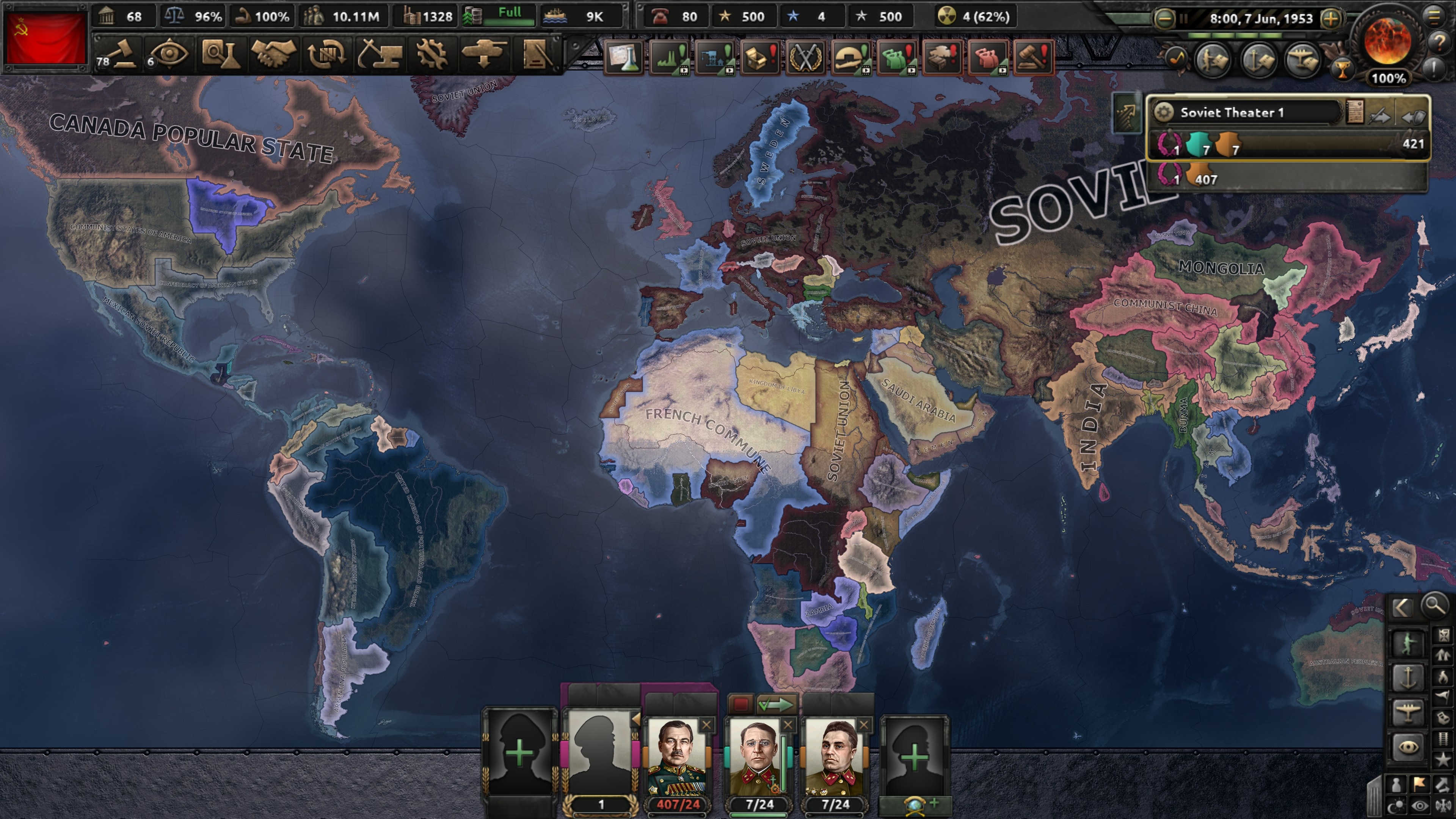 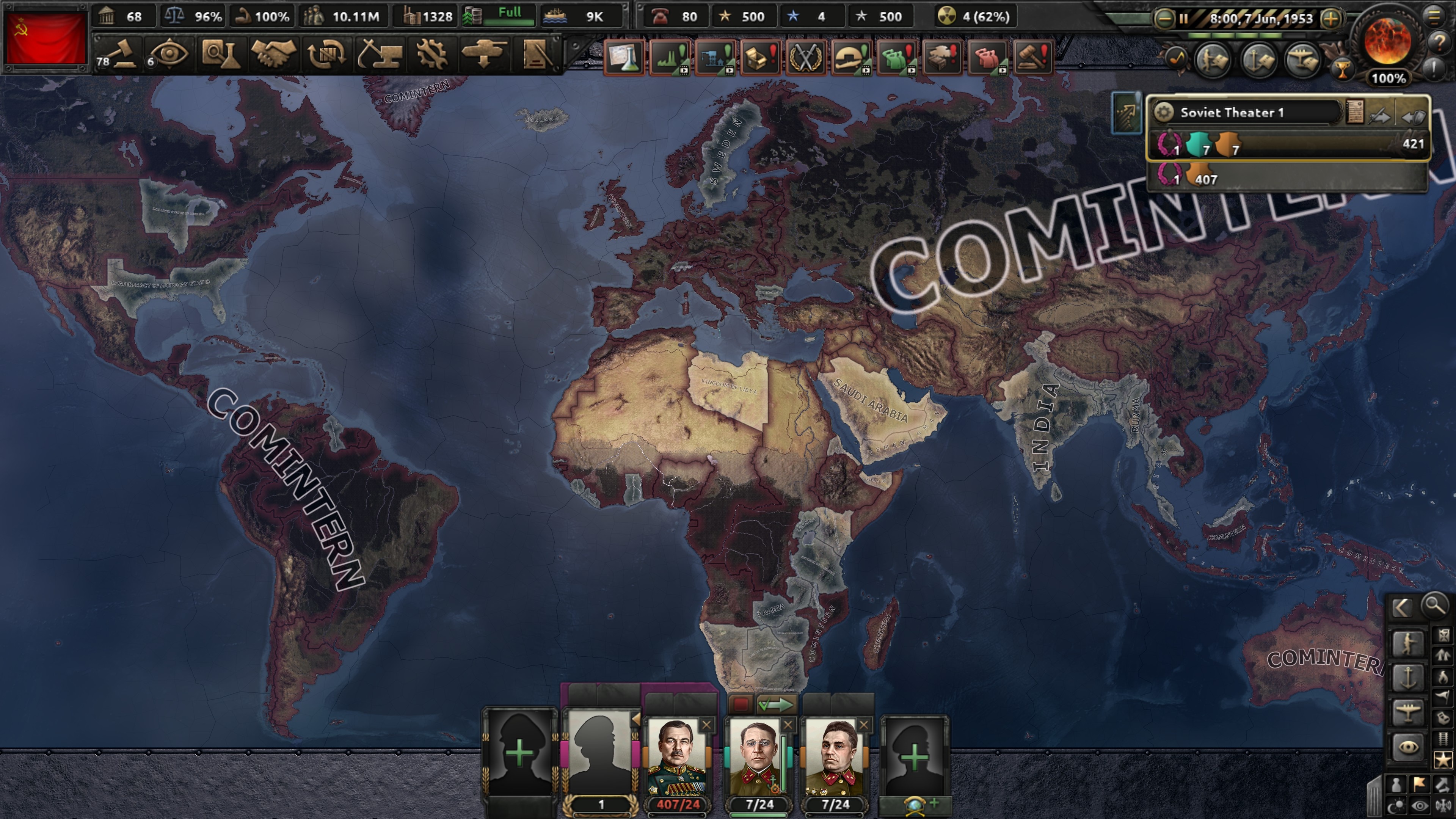 Without some serious mods happening, 53 is actually a pretty good place for a playthrough to leave off. It's a nice love-hate game anyway. You get sick of it after a run and stop playing, then come back later because filling in maps.

"Jet fighter iii" and "mbt 1964" aren't exactly the most inspiring names for equipment. The game really lacks flavor on that sometimes. Withheld and slowly dripped out in DLC.

I tried playing Rome Remaster. There are some easy shiny achievements. I played a few turns and found out that

The UI changes on for the game ruined it totally.

I found something else good though. Days Gone is pretty fun. Open world Zombie biker game. Was a PS4 exclusive so it is AAA.


No clue this existed until it was ported to PC recently. I wonder what other console exclusives I missed.

I remember seeing Days Gone dev videos and then promptly forgetting about the game. I have Playstations, but it's not a platform I'm on constantly. Out of all the brands, I probably have the most time on various Nintendos.

Opening mission. What a small size horde of zombies looks like. 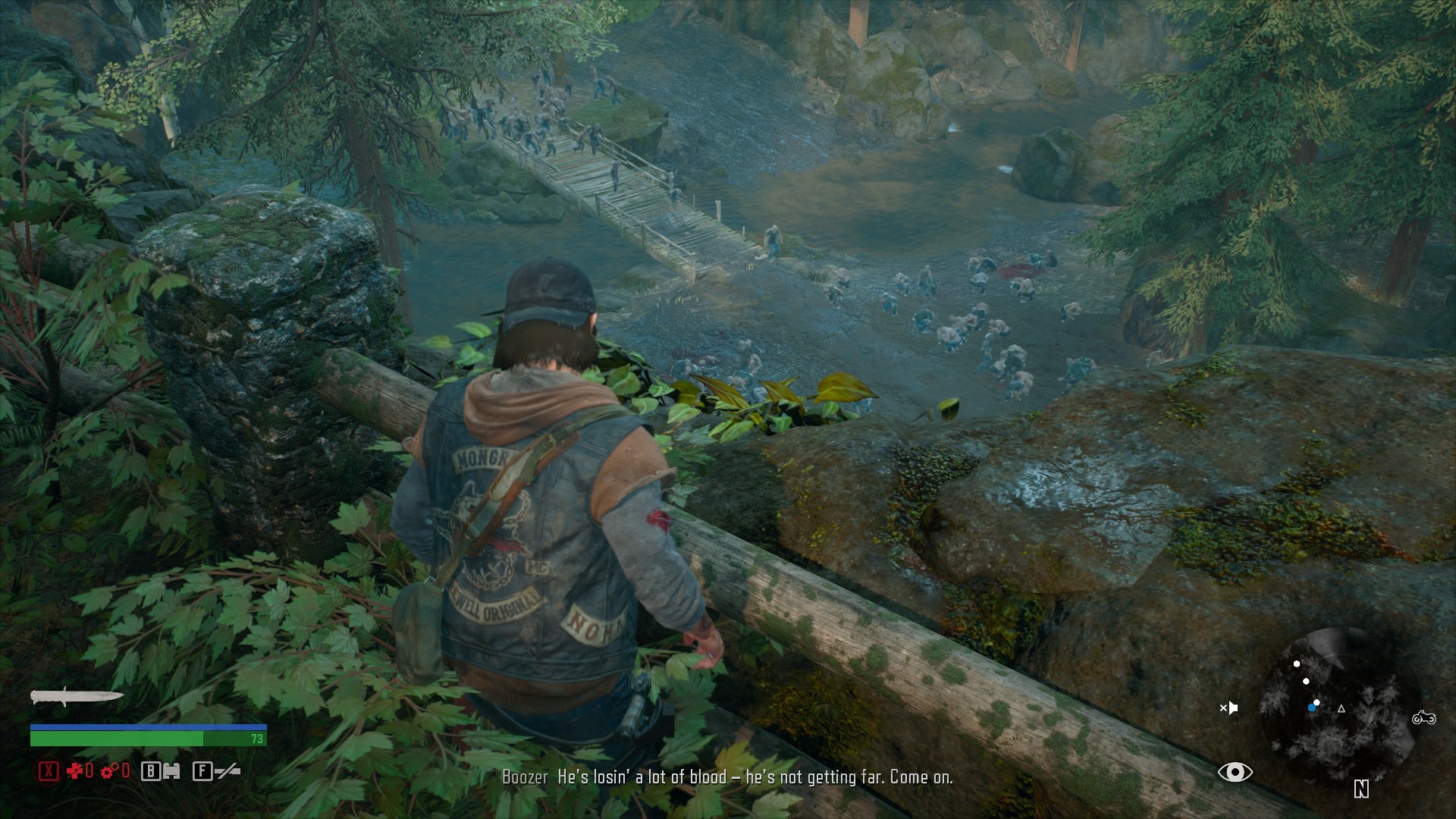 Traveling between missions. I accidently drove into the zombie after this while trying to take a screenshot. 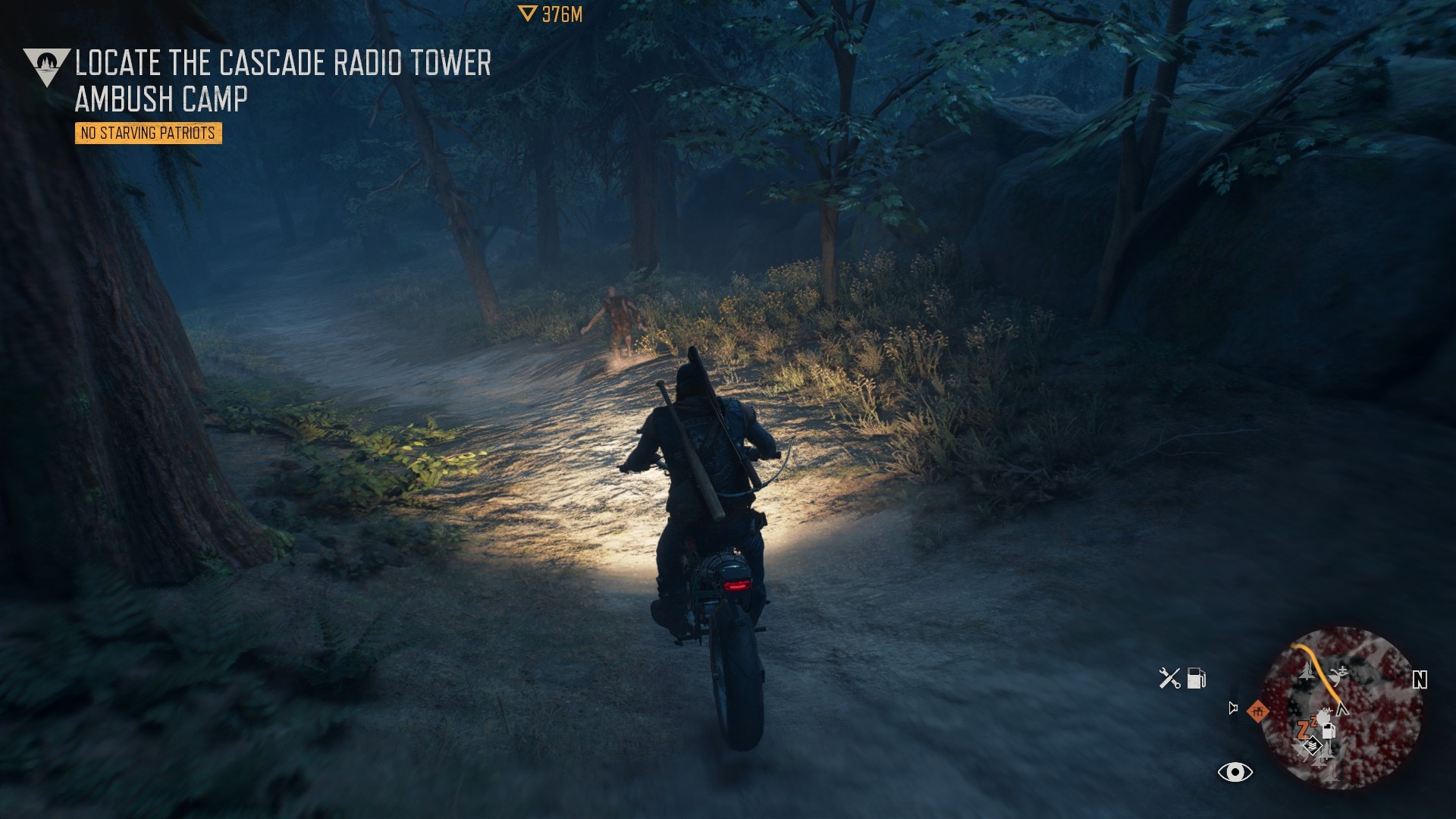 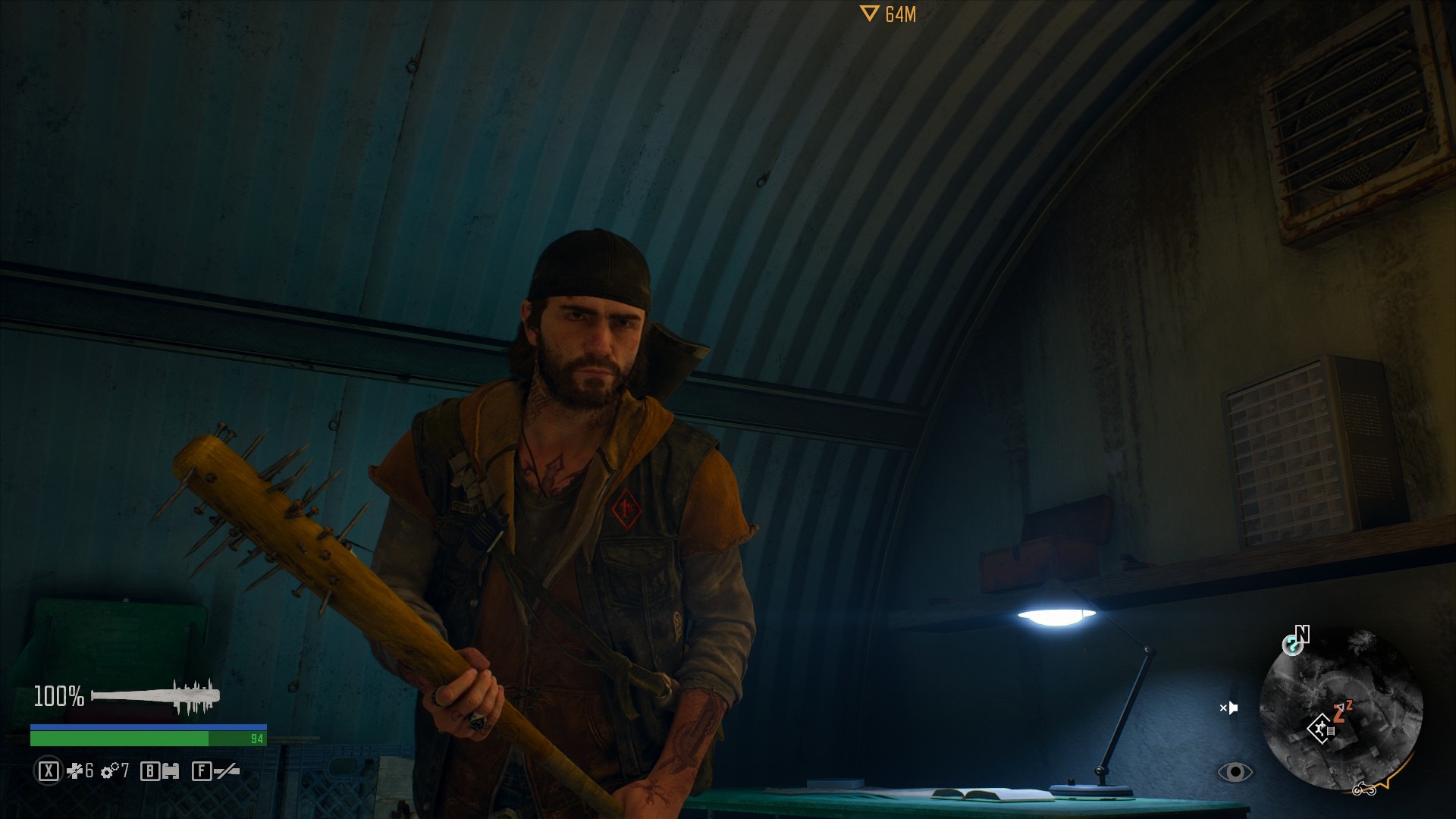 This dude meets the bat 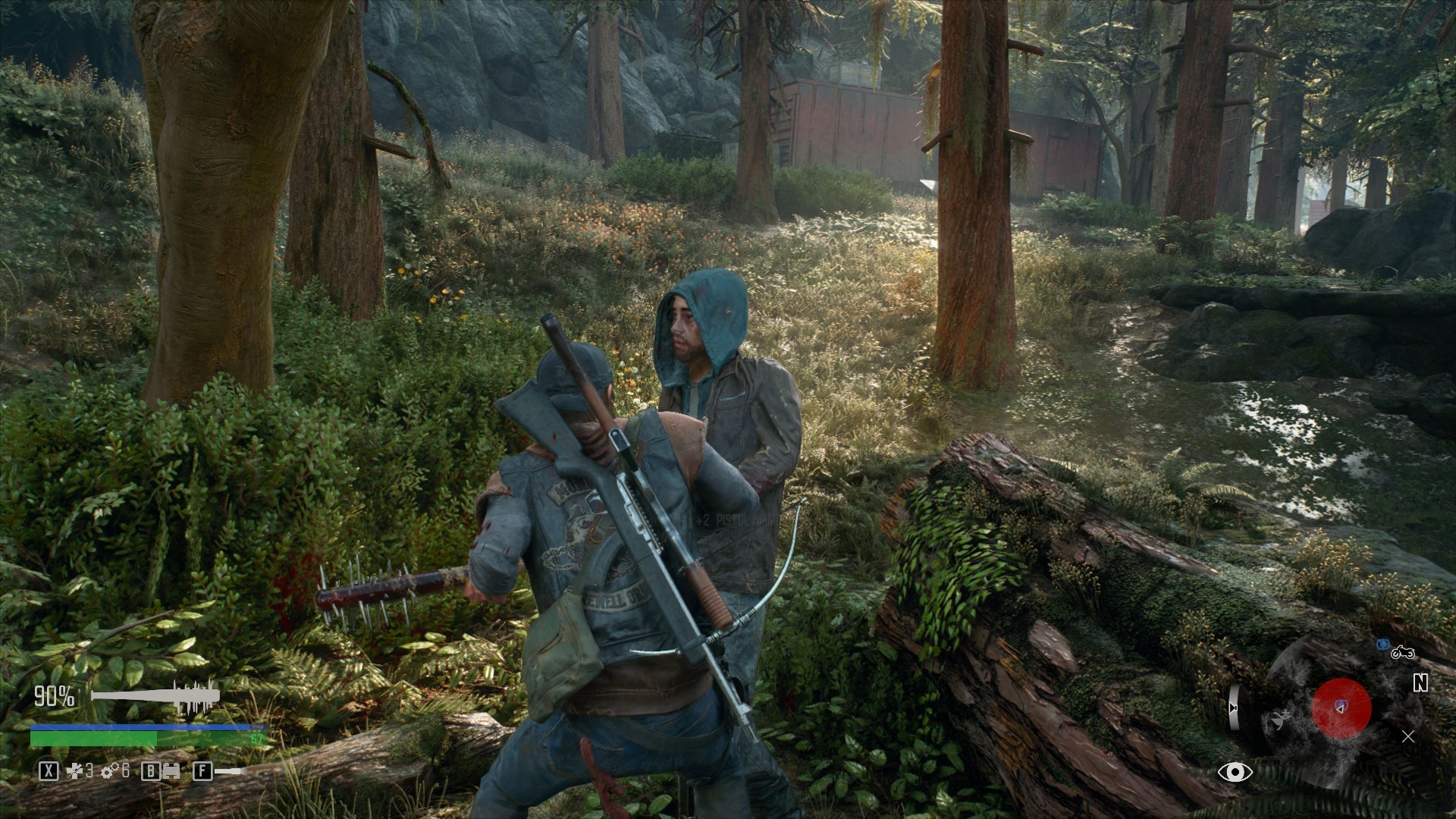 About to blast this human npc with a shotgun. 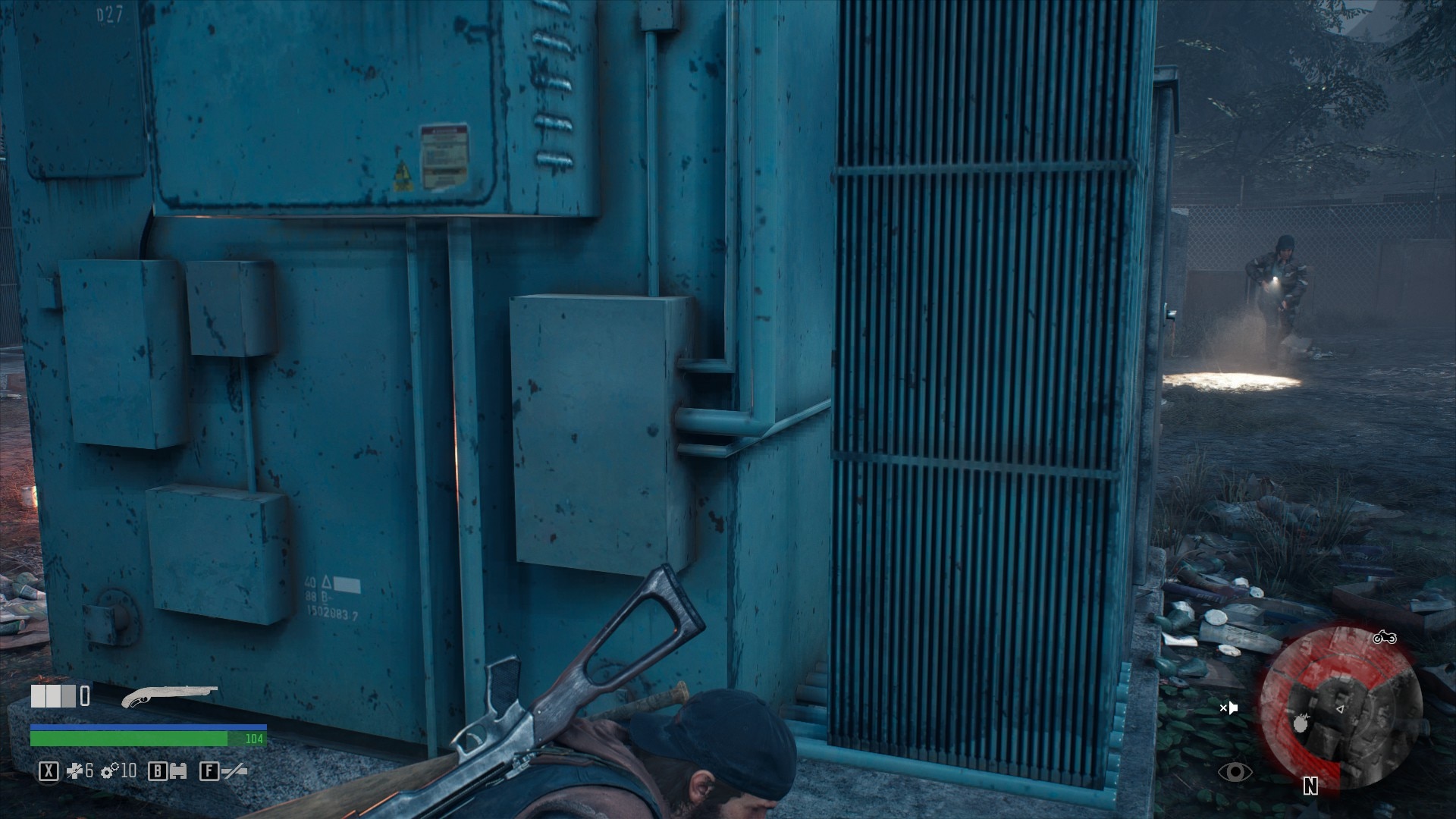 Some more human npcs who got in my way. 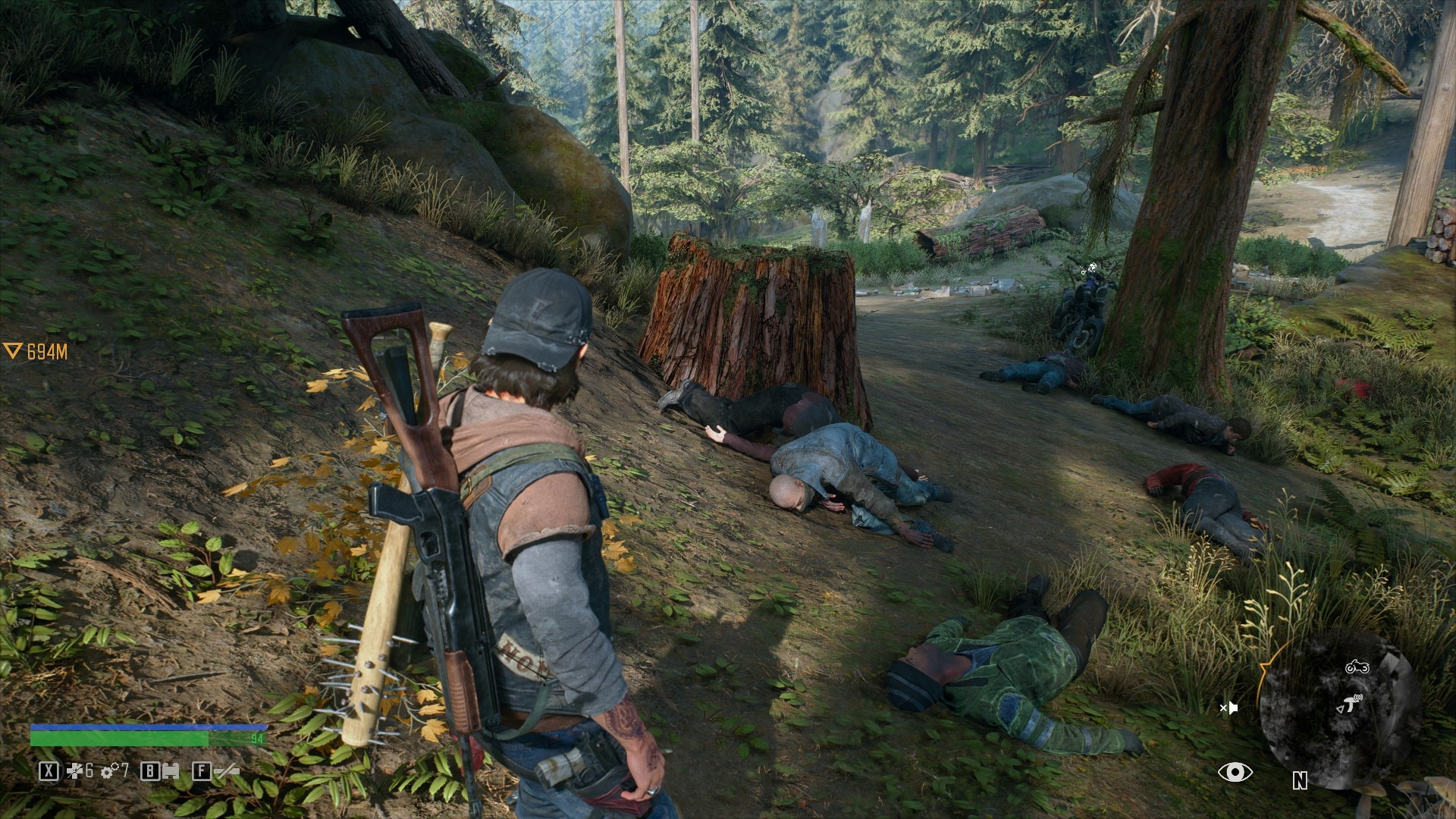 Some zombies who batted. 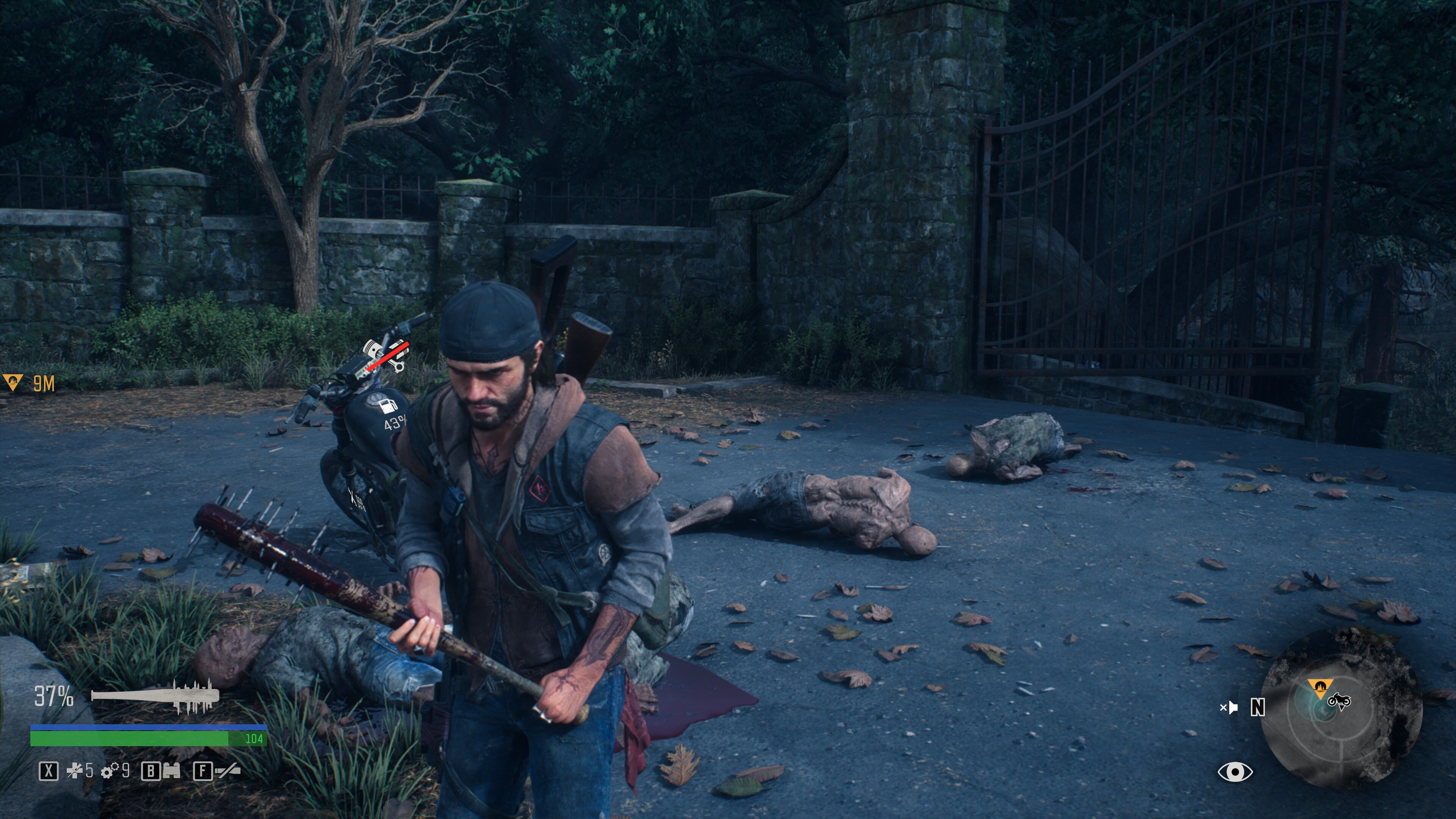 And finally a landscape shot 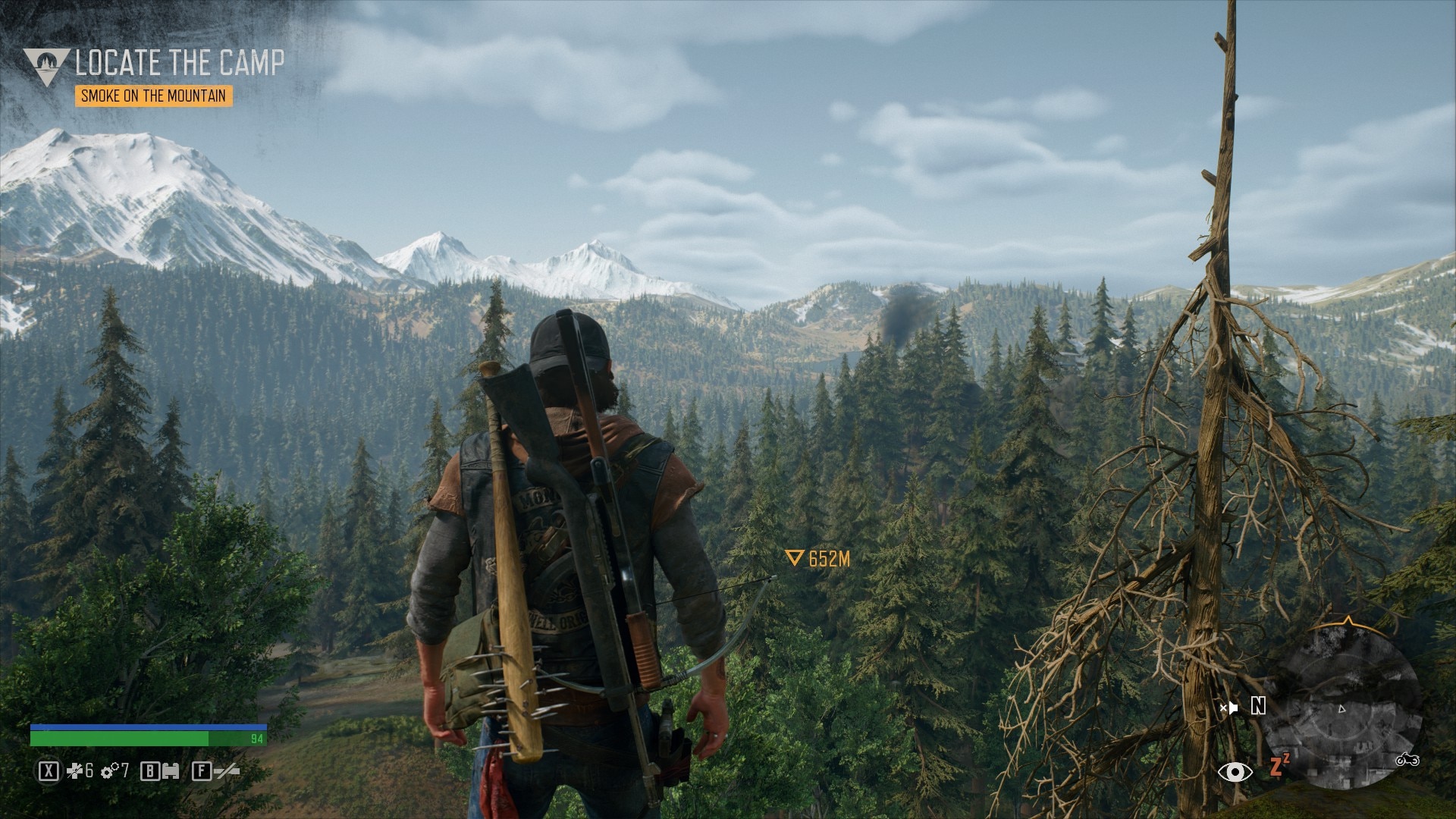 Eh, pass. It's stupid that I have to agree with a privacy policy clickwrap that folds in Playstation console stuff for a game that is being sold on Steam.

I'll stick with the indie-looking game I posted about that you didn't want to play because you were quitting zombie games.

I didn't have to interact with anything related to the PlayStation network.

This game is the most perfect and accurate representation of a zombie apocalypse experience in any video game.

Oh it didn't ask me to do anything with it.

Lots of clickwrap contents never really show themselves to you, but they're still there. Clickwrap is a fact of life here. It's not so much that it's there that bothers me so much (I have playstation stuff on my playstation) as I'm agreeing to copy/pasted PS Vita stuff on a steam game. Maybe pull their lawyers back from shutting down fan projects and work on ports documents instead.

The game itself looks alright. I don't know about your claim of "most realistic" though. Humble Zomboid, meanwhile, makes it onto top ten zombie game lists alongside AAA titles.

Also, who would sling a spiked bat like that. Constantly poking yourself in the lower back as you stumble downhill.

It's realistic in the fact that the game has just normal zombies. There aren't any Resident Evil or L4D SpEcIaL zOmBiEs that do magic tricks. Just normal old zombies in a dangerous world. Absolutely perfect.

That's Zomboid too, though. You can get pretty much any variety of "normal old zombie" that you want to tweak for your world. It meets your conditions except I guess for graphics (makes up for in mood imo).

Sandbox settings from the wiki:
https://pzwiki.net/wiki/Custom_Sandbox

Why won't you give Days Gone a chance?

Mostly because even after viewing the page once, I got blocked from the store page when trying to view it again after I clicked 2001 as a birth year because I didn't want to scroll up ("you are not permitted to view this at this time"). 20's not old enough? Get outta here.

Also, it's $40. Also 76, metacritic and very positive on Steam seem very run-of-the-mill. I'll wait for something better than 20% off if I go to try it.

My endorsement is equal to a 96 on Metacritic. When it goes on sale, you need to play it and submit an AAR. Thank you. Steam refund it even if you don't like it.

If my character can't die of an infection from a glass cut sustained while climbing through a broken window, I have questions about just how realistic things are.